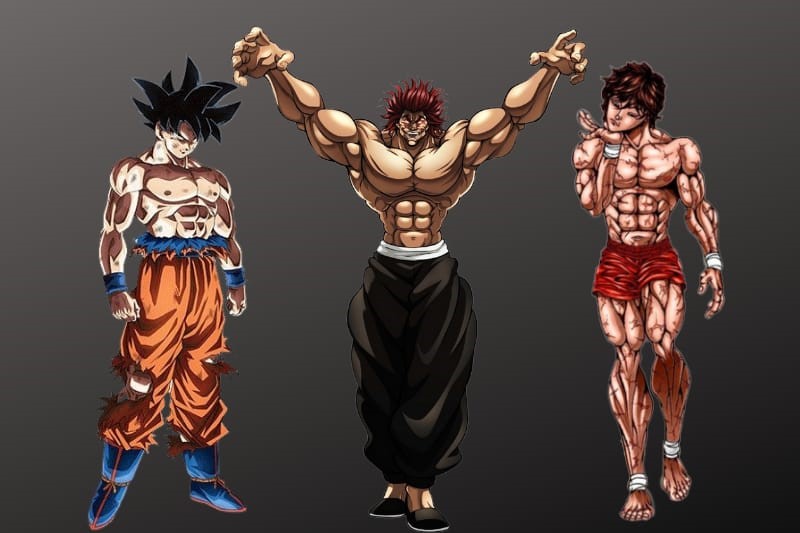 Almost every anime series has a vast number of anime guys with abs who are attractive, well-built, and muscular. Their abs appear more remarkable and attractive in their overall attractive physique, which is what fans like the most about them.

They also inspired many bodybuilders, athletes, and sportsmen all around the world with their stunning physiques and captivating personalities. In this article, you will discover the 15 most attractive anime guys with abs as of 2022.

Yujirou Hanma is the main villain and one of the strongest fighters in the Baki franchise. He is also popularly known as “Ogre” and is the father of Baki Hanma, the main character of the franchise.

Yujirou is an extremely tall and very muscular man with a very prideful personality. He has attractive abs and a spectacular physique. Due to his superhuman yet attractive body, he inspired lots of bodybuilders across the world and became their idol.

Son Goku, who is also known by the name Kakarot, is the protagonist of the Dragon Ball franchise. He is a Saiyan (alien) who lives on earth with his family, and he loves fighting.

His only goal is to fight and win against the strongest being in the universe, whether it’s a god, alien, or demon. He is a tall, muscular man with a well-built physique, and he also has fantastic abs that make his body even more fantastic whenever his outfits tear.

Alongside the fantastic physique, Goku also has an adorable face and very unique spiked hair, which have also become part of his identity with his fans.

Killua Zoldyck is the second main character of the Hunter × Hunter series. He is the middle child of the Zoldyck Family, the deadliest and most infamous group of assassins in the world. He is also the best friend of Gon Freecss, the protagonist of the series.

Killua is a short, muscular boy with a fully aesthetic physique. Furthermore, he has fantastic abs that make him more attractive when he is shirtless. Alongside the fantastic body, he is also gifted with a charming face that make him one of the coolest anime guys with abs.

Ryomen Sukuna is the strongest and most popular villain in the Jujutsu Kaisen series. He is the King of cursed spirits and was reincarnated in Itadori Yuji’s body, one of the main characters of the series.

Sukuna looks so attractive because of his incredible athletic build and amazing abs. He not only looks attractive but also has a spectacular personality that makes him so popular among fans. As a consequence, he deserves to be on the list of attractive anime guys with abs.

Baki is a tall, muscular guy with an incredible physique and well-built abs that make him even more attractive whenever he comes to the ring to fight in his shorts. He is also regarded as one of the strongest anime guys with abs.

Tokita Ohma is the lead character in the Kengan Asura series. He is one of the strongest and most skilled fighters in the series. He lived his entire life only seeking powerful opponents in order to fight them at his peak strength.

Tokita is an extremely attractive young man with an incredible athletic physique. His attractive abs and coolest personality make him one of the most attractive anime guys with abs.

Roronoa Zoro is a member of the straw hat crew and also its strongest member. Because of his personality and backstory, he is also the second-most popular character in the One Piece series after Luffy.

Zoro appears to be difficult to approach, but he is a kindhearted person who is always willing to help others. He is a very tall, muscular man with a great physique and a very serious and calm attitude.

Zoro also has nice abs that make him even more appealing when he’s shirtless. Alongside the fantastic body and abs, he is also a skilled swordsman who can fight with three swords easily.

Inosuke Hashibira is one of the major characters in the Demon Slayer: Kimetsu no Yaiba series. He, along with Zenitsu Agatsuma, is a travelling companion of Tanjiro Kamado and Nezuko Kamado.

Inosuke is an average-height boy with a fully muscular body. He also has fantastic abs that make him look like a macho man because he never wears his upper body dress.

Alongside the muscular body, he is also gifted with a charmingly feminine face with stunningly big eyes.

Lu Bu Fengxian is one of the main characters in Season 1 of the “Record of Ragnarok” anime. He will face Thor as humanity’s candidate in the first round of Ragnarok.

Due to his incredible strength and willpower, he was regarded as the strongest warrior in human history. He is a very tall and muscular man with battle scars covering his entire body.

There is no doubt that Lu Bu has the best abs in the series’ first season which sets him apart from the other  contestants. His dark hair falls to his waist and is styled into a bun with two golden feathers that look like pheasant-tail antennas.

Ippo Makunouchi is the main protagonist and the eponymous character of the Hajime no Ippo series. He is a former JBC featherweight champion, a featherweight boxer from the Kamogawa Boxing Gym, and the “unofficial champion” of the OPBF.

Ippo is a very short person, but his fully fit physique and fantastic abs make him attractive whenever he fights in the ring. Along with his fit physique, he has black shaggy hair and a tanned skin tone, giving him the appearance of a true athlete.

Aoi Todo is one of the major supporting characters in the Jujutsu Kaisen series. He is a third-year student and a grade 1 jujutsu sorcerer. He is also the strongest first-grade student at Kyoto Jujutsu High School.

In his youth, Todo was mentored by Yuki Tsukumo, and he regards Yuji Itadori as his best friend because they have similar tastes in women. He is a tall, huge man with broad shoulders and a muscular physique.

Furthermore, his abs are so well defined that they are easily visible and highly visible whenever he undresses or tears his shirt during a battle or show off.

All Might is a very important character in the My Hero Academia franchise. All Might is his superhero name, and his original name is Toshinori Yagi. He is the eighth user of the One for All quirk and the former No. 1 Hero, who has been replaced by Endeavor.

After retiring, All Might became a teacher at UA High School. He is a tall, huge man with broad shoulders and a muscular physique. Furthermore, his abs are so hard that they are easily visible outside of his outfits, making her attractive regardless of what he is wearing.

He possesses chiseled facial characteristics, such as a sharp jawline, prominent cheekbones, and bushy eyebrows.

Kagami Taiga is the second main character of the Kuroko no Basket series. He is Seirin High’s star player and power forward. He is the teammate and buddy of Tetsuya Kuroko, who is driven to surpass the Generation of Miracles and become the finest basketball player in Japan.

Kagami is very tall and well-built young guy that giving him a commanding presence. Along with his tall and muscular build, he also had fantastic abs, which made her even more appealing in the series.

Garou is a martial arts prodigy and self-proclaimed hero hunter. He is one of the most popular as well as main antagonist of the One Punch Man series.

Garou has the appearance of a young wolf with his pointed features, bright yellow eyes, and long silver hair that rises in two long prongs. He has a powerful, slender frame and fantastic abs, which enhance his appeal when he removes his shirt.

Eren Yeager is the main protagonist of the Attack on Titan series. He is a former soldier of the survey corps, but after knowing the whole truth, he quit the survey corps and started working himself for his and his loved ones’ freedom.

Eren is an average-height, well-built, handsome man with a fairly long face. He had best six abs in addition to his well-built body, making him the best anime guy with abs.

We’ll conclude this article by discussing every anime guy on the list who has attractive abs. This wonderful list was prepared based on their popularity and attractive abs.