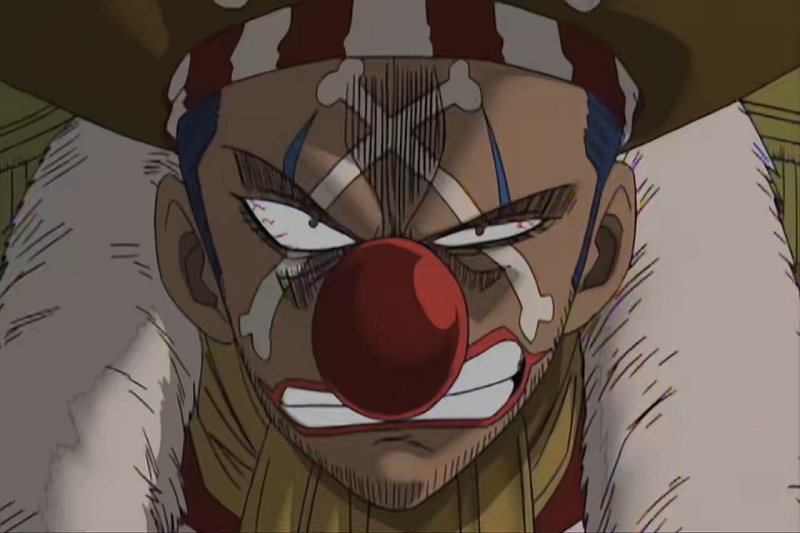 One Piece manga follows the journey of Luffy and his goal to become King of the Pirates. The manga is written by Eiichiro Oda, whose favorite character is Buggy which he revealed in an old interview. Hence, today’s article is based on Buggy the Clown, one of the critical characters in the series, and we will discuss the significant roles that Buggy plays in the series.

Buggy had a considerable impact on the series; his journey is worth reading as he started from being an apprentice in Roger’s crew to becoming one of the most powerful Yonko in the series. His journey from the main antagonist of the East Blue Saga to the Heroes of all Pirates is worth reading. Buggy is one of the comic relief characters of One Piece, and his hilarious antics are fun to watch. 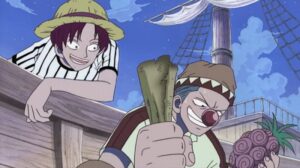 Roger pirates took Buggy when he was just a child. He was an apprentice with Shanks, with whom he shares a rivalry. They both used to have silly banters that Dark King Rayleigh generally stopped. Roger pirates were attacked by an Enemy ship, where they emerged victorious. Meanwhile, Buggy manages to defeat an enemy and acquires a treasure map.

Later that night, he and Shanks had a serious conversation where Shanks told him that a devil fruit could be sold at 100 million berries. This greatly surprised him and awakened his greedy side, so the next day, he ate a random fruit to fool his crew while keeping the real one inside his pocket. At night while speaking to himself, he boasted about how he would form his crew with the help of a treasure map and devil fruit.

Out of nowhere, Shanks surprised him from behind, which led Buggy to consume the fruit accidentally, and in confusion, the treasure map he stole fell into the sea. He immediately jumped to obtain it but drowned due to the power of the devil’s fruit. Ultimately, he was saved by Shanks. After this incident, he blamed Shanks for his plans getting ruined.

Since he became a devil fruit user, it made him unable to swim, thus making his chances to get underwater treasure impossible. So, he had a grudge against Shanks after this day. If Buggy had not eaten the devil fruit, he would not bear any grudges against Shanks, and he might have succeeded in getting his treasure and sold the Devil fruit at a higher price.

2) When Buggy gets sick before reaching Raftel 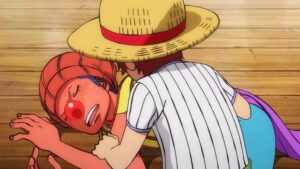 One of the most misfortune events other than eating devil fruit in the life of Buggy was getting sick before reaching Raftel. After successfully finding all four Road Poneglyphs, Kozuki Oden deciphered those Poneglyphs and successfully found the location. As Gol D. Roger told his crew they were about to leave for location, Buggy got untimely sick, which cost him his visit. Shanks took care of him, who chose not to visit Raftel.

If Buggy had not been sick during the voyage, he would have visited the island along with Shanks. At Raftel, he might have learned the truth of the world. After knowing the true nature of One Piece, it would lead him to throw away his grudge against Shanks. This incident might shape him into a mighty pirate like Shanks. 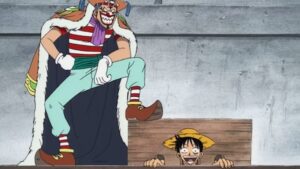 Loguetown arc is the final arc of East Blue Saga, where Buggy played a massive role in it. After his defeat at the hands of Luffy at Orange town, where he lost his crew. He allied with Alvida, another foe of Luffy from the past.

With the help of Alvida, he got his crew back and went to Loguetown to find Luffy. He successfully captured Luffy and got him trapped at the same gallows where Roger was executed. Luckily, when he was about to execute Luffy, a thunderbolt fell on him; thus, Luffy got saved. Had he succeeded in executing Luffy, he would have made an enemy out of Ace, Dragon, and Shanks, and after that, Buggy is unable to survive in the new world and even gets killed by Zoro.

4) Buggy teaming up with Luffy in Impel Down 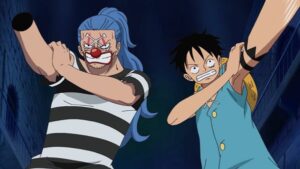 One of the turning point arcs for Buggy the clown, as it played a huge part in shaping his role in the series’ future. During one of his failed treasure hunts, Buggy was caught by the marines. He was thrown into impel down, where he started a prison break. He accidentally bumped into Luffy, who he was heading to level 4 of Impel Down to rescue his brother, Ace.

Buggy was annoyed at first as to how Luffy was similar to Shanks but had a change of heart when he saw an image of his old friend inside Luffy. Even though it was dangerous, he agreed to help Luffy; this led him back to the top position in the pirate world as he gained Mr.3, aka Galdino, and a vast number of prisoners of Impel Down as his crew.

To rescue Ace, Buggy and Luffy joined forces with Crocodile, Ivankov, Galdino, Bentham, Jinbe, and Daz Bonez to take on Warden Magellan. He managed to escape successfully along with the others but at the cost of the sacrifice made by Bentham. Luffy punched Buggy as he did not care about Bentham’s sacrifice. Immediately, when Luffy told him he was going to join the war, he became shocked.

If Buggy hadn’t participated in the prison break alongside Luffy. Luffy might have difficulty going inside the below levels of Impel Down. His crew would have been controlled by Alvida. He might have remained in prison for the rest of the story.

One of the most emotional arcs of One Piece is “The Marineford arc.” It was the battle between the marines and pirates. Portgas D. Ace, the 2nd division commander of Whitebeard pirates, was captured by Blackbeard and was handed to Marines for the Warlord position. Ace was going to be publicly executed by the Marines; thus, Whitebeard pirates waged war against them to rescue their 2nd division commander.

The war played an essential part in the series, and it was dubbed “the war of the best.” After escaping from Impel Down, Buggy immediately participated in the war. Most of the time during the war, he goofed around, especially his fight against Dracule Mihawk was hilarious.

Buggy’s prominence came when he stole the video Den Den Mushi from the marines, which were ordered to be stopped so Ace’s execution was not broadcasted to the world. Much to the dismay of Sengoku, Buggy used this for his gain but eventually, this paved the way for Ace’s execution to get delayed, which gave Luffy a chance to save him. Later, Shanks made Buggy deliver Luffy’s hat. Later he had a funny banter with Shanks where the latter played the fool around him.

If Buggy didn’t participate in the war, Ace’s execution would not have been delayed, and he might have been immediately taken care of by the Marines. The world might not have gotten a chance to witness the war. 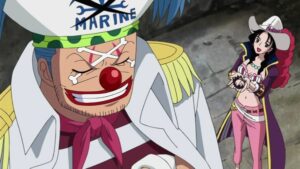 After the conclusion of the Marineford war, the man who gained immense success and power was Buggy. During the war, he not only got new followers, and he got a warlord position as well. His affiliations include being an apprentice in Roger’s crew and sworn brother to the current Yonko Shanks.

After the war was over, probably with the help of Shanks, he escaped and found his crew under Alvida’s leadership. He introduces Galdino and other escaped prisoners to the crew, where the new respect for him grows on both sides. As he was about to show Captain John’s treasure location to Alvida, he immediately received an offer letter from the World Government for the position of Warlord.

After becoming a warlord, he used his newfound power to form a service called Buggy’s delivery. It is nothing but sending pirates to assist one of the warring sides around the world, where he would give support to whoever paid him higher. One of the Straw Hats Grand fleet members, Hajruddin, was a member of this organization.

After the downfall of Doflamingo, Buggy celebrated this occasion along with his crucial crew mates such as Mohji, Cabaji, Ritchie, Alvida, and Galdino, as he taught that this step would make his business bloom. But later on, he was furious when Hajruddin left the service to join Luffy s grand fleet. 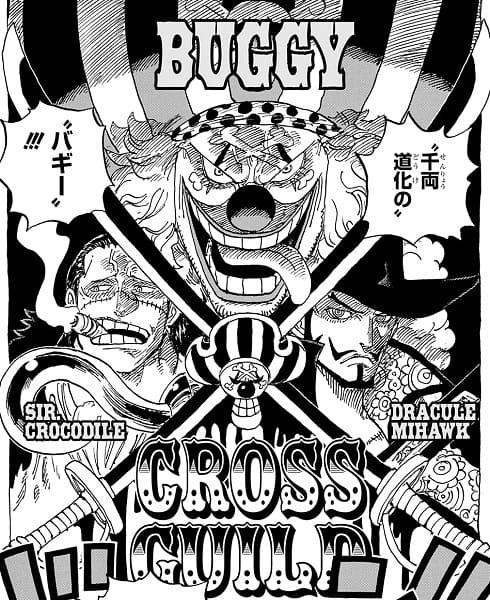 After the abolishment of the Warlord system, the action was taken by the World Government. Buggy’s service Buggy Deliver fell into jeopardy. As he was surrounded by Marines who ordered him to surrender. Buggy furiously yells at them and asks why he should suffer because of deeds done by former warlords, i.e., Crocodile and Doflamingo.

Somehow Buggy managed to escape, and after the downfall of Kaido and Big Mom, he became a Yonko. At the start of the manga, Buggy was beyond his peers like Shanks, Hawkeye, Blackbeard, Doflamingo, Crocodile, and Moria, who started at the same time but achieved the status of Yonko and Warlord in a short time, unlike him.

Finally, he became a Yonko and formed an organization known as Cross Guild along with former warlords Mihawk and Crocodile. Not only this, Buggy has put bounties on Marine’s heads now. It’s the same like Marines do against Pirates. But honestly speaking, placing bounties on Marine’s head is one of the most overpowered things someone did in the One Piece history. It means now the Marines also must live in fear of assassination from civilians.

So, this is it for today, folks! Here, we have concluded our article on “All Major Roles by Buggy in One Piece” We will update once the story progresses further as we could witness more hilarious acts of Buggy.