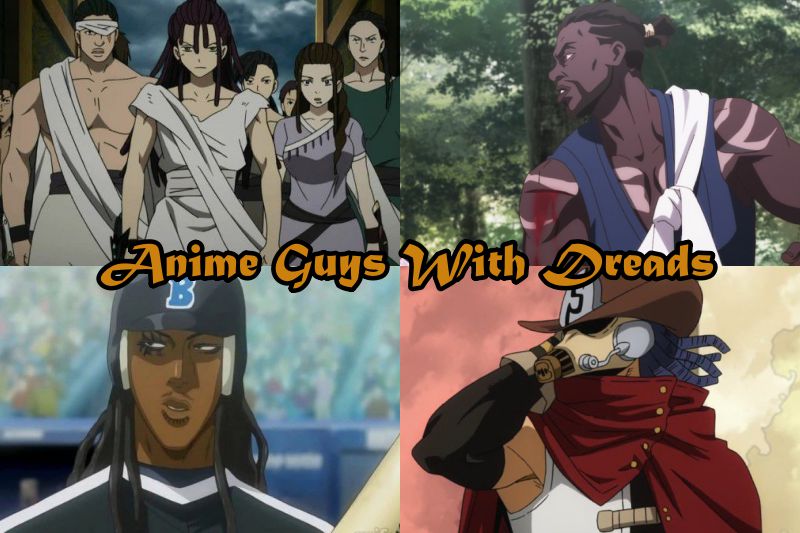 Anime characters have always been unique and appealing, and especially the characters with Dreads, give off a different vibe entirely and have many intricate details in their styles.

Muhammed Avdol plays a vital role in the story of Jojo Part 3, also known as Stardust Crusaders. He reveals most of the important information about many of the villains and helps Jotaro as well as Joseph on a lot of occasions.

Avdol has a muscular build, and his dreads were designed to match his character design and suit him aptly. He is well known for his serious nature and his Dreads, taking first place in this list. This hairstyle suits him so well that we cannot imagine Avdol with any other style that fits him more perfectly than this one.

One of the antagonists, as well as the former captain of the 9th division, Tosen, is one of the only characters in the whole series who cannot be affected by Aizen’s Zanpakuto.

He is a righteous character, and his design speaks for itself. Tosen’s dreads are a perfect fit for his personality, as well as his blind nature. Even after Hollowfication, he maintains his style and the dreads, making it a fan-favorite look.

Subaru Mimasaka is a character who initially shows up as a bad guy but then sticks to finding his heart after meeting Soma.

Brawler is known for his fighting ability and style in high-speed octane anime. He is another example of how often characters with a tall and muscular build look good with dreads.

Fuelled by his thirst for battle and blood, his red-colored braids represent the same attitude of his in the series, and he is an exemplary character, with the portrayal of his nature in his dressing style mostly reflecting on his dreads.

The story of an African Samurai and a loyal retainer of Oda Nobunaga named Yasuke. Based on a real-life story, this anime follows the story of Yasuke in his journey.

Yasuke is a unique take on dreads, as his hairstyle is a mix of dreads and a ponytail, which he is well known for. The portrayal of this character checks out with the history books and is showcased effectively as a powerful samurai with his character design, which goes hand in hand with his dreads style.

Yasuhiro is a self-proclaimed clairvoyant and is depicted as a scaredy cat in the show who just follows the opinions of the majority of characters during trials and other deductions.

He is well known for his dreadlocks, left out untied, for taking a step down from the niches of dreads and being portrayed in a new light. His untied dreads showcase his free and laid-back nature throughout the whole series. His hair also syncs with his expressions and his personality, making it an effective look for this character.

Killer Bee is the host of the eight-tails jinchuriki, who plays a vital role in the later part of the series, with his brother as the Raikage. He is known more for his quirky and funny raps, as well as his strength in battle with his unique and acrobatic usage of multiple swords at a single time.

His comical nature and his brawny look precede his white dreads combed up neatly. Killer bee’s look aptly suits his white clothes, which makes his dreads look pretty natural and stand out the most in his design.

Tessai Tsukabishi is another exiled captain alongside Urahara, who runs a shop set up in Karakura Town, and helps Kisuke when he sees fit.

Tessai effortlessly puts up his dreads, with a stout look and crowbar mustache, which effortlessly blends in with his long dread hairstyle. His calm and level-headed nature, along with his comical attitude, is demonstrated by his strong appearance with his dreads.

Snipe is one of the pro heroes as well as the teacher for the U.A. High School students. He is a professional and well-recognized in his field, which also reflects in his position.

Snipe has the classic cowboy look down, donning a quirky mask on top in addition to his look. His whole design has a unique and colorful pattern, which is also signified by his dark blue dreads. This makes him stand out most of the time and is a very advanced addition to the cowboy look.

Don Kanonji is the host of a famous T.V. show, who tries to effectively exorcise ghosts as well as other spiritual entities and film them for his viewers.

He is a comic relief character who is responsible for most of the comedic moments in the series. He has a varying set of outfits throughout the whole series, depending on the content he wants to show off. Generally, he wears a hat, but his hairstyle can be visible as long dreads, with a zigzag fashion of black and grey colored dreadlocks.

The zigzag fashion of mixing different colored dreads effectively puts him in this position on this list.

Oyecomova is one of the minor antagonists in Steel ball run, and his stand possesses the ability to fabricate bombs out of anything, which makes it difficult for anyone to approach him.

His dressing sense is rather distinctive, and it might look like the design is based on the American flag. His long and black dreadlock hair further amplifies his stature by giving a scary and eerie vibe. It also kind of gives out a tag reading that he is one not to be messed with, as he can go to any great lengths to complete his goals.

Oyecomova is a rather special addition to this list because of his funky dressing style with long laced dreads that fit perfectly well for his stand as well as his character.

Dennis Johnson is one of the minor characters from One Outs, who is nicknamed as World’s fastest man. He was a foreigner, scouted to be a strong addition to the Bugaboos team.

He gives off an intimidating and superior aura all around him due to the title he earned. Dennis is a tall and muscular guy and also has a black, long dreadlock hairstyle. These attributes further elevate his screen presence and make him look scarier and a formidable foe to tackle.

Anime: Magi: The Labyrinth of Magic

The adoptive brother of the protagonist of the anime Magi, Cassim, has many similarities with Alibaba in the show. He acts like a cold-hearted person and has a worse case of an inferiority complex.

But, behind all this, Cassim is a gentle and kind-hearted person who cares more for his friends and brother and puts them first than putting himself first. He looked after Alibaba for quite some time and even saved his life when he was in danger.

Cassim looks like a middle-aged boy with long dreadlocks suited in a half-ponytail fashion. His golden eyes match completely with his long brown hair and his earrings. At first glance, he gives off the aura of a swindler, and his design fools viewers by giving out a wrong idea about his character.

Jerso initially posed as a minor antagonist, and under the command of the scarlet alchemist, Kimblee, he later turned to help the Elric brothers to reverse the effects of the chimera experiment, which was performed on him.

His dark-skinned features, along with his black dreadlocks in a tied-up fashion, further boost his character design, along with throwing away small hints about the character, and it can also be noticed that he tilts more to the chimera angle with his design.

Anime: Skeleton Knight in Another World

One of the minor antagonists in the series, who was hired by the main guy at play, Fumba Soodu Rozombanya, is depicted as the worst of the worst, dealing in many illicit businesses and doing the dirty work for others.

He is an experienced Beast Tamer who has the needful skills and is shown to be conducting a lot of illegal business, like slavery or as a drug seller, on top of being a womanizer.

He chooses a braided Dreadlock hairstyle, which looks almost similar to some other characters’ dreads style, but this one is more shaggy and unrefined. His style of dreads alone gives off his villainous and his powerless nature. He has a high ego and low self-esteem, which is rather understood by his unrefined dressing sense.

This character works as a perfect example of how to utilize dreadlocks and manipulate the character design to portray a self-inflated antagonist character.

Here ends our post of the top 15 Anime guys with Dreads list. This list was made based on an analysis of how apt the dreadlocks suited a character depending on their character traits and design in their series.