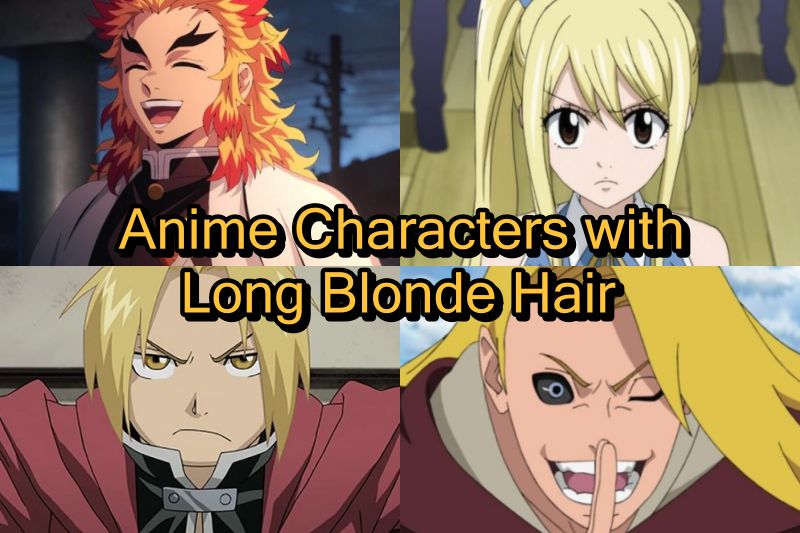 Blonde hair is one of the most popular hair colors in anime. Almost every anime has a character or two with blonde hair. Some of them are styled in short hairstyles, while some are long. Today, we’ll be talking about those with long hair, both male and female. We’ve made a list of 15 anime characters with long blonde hair. 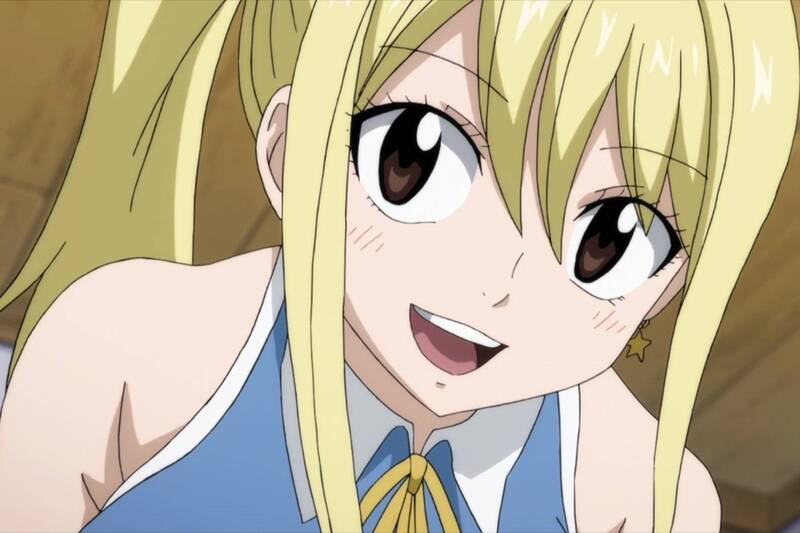 Lucy Heartfilia is a Mage and a guild member of Fairy Tail. She is a Celestial Spirit Magic user and summons Celestial Spirits through keys to aid her in battle. Currently, Lucy holds nine of the twelve Celestial keys after losing Aquarius. She’s also a member of Team Natsu.

Lucy is a very beautiful woman who has been sought after by many men for her looks. She has a voluptuous figure with long blonde hair and big brown eyes. Her hair grows with the series, starting from a little down the shoulders to all the way down to her hips. 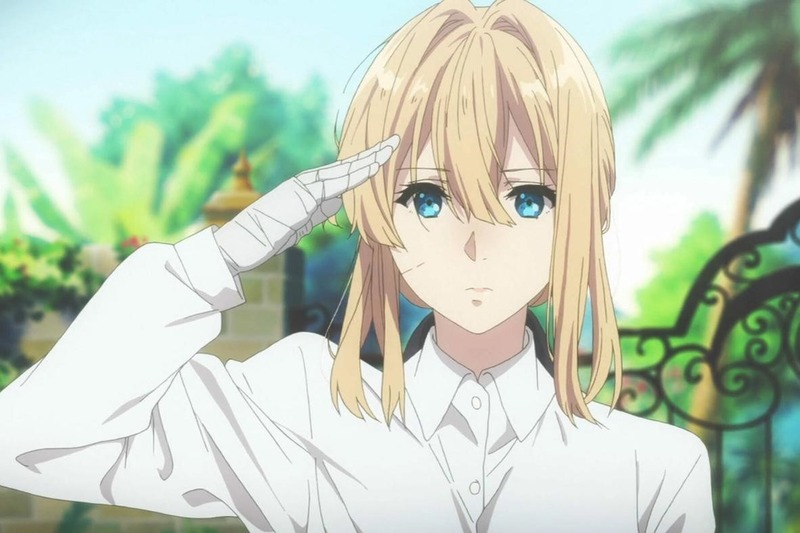 Violet Evergarden is an Auto Memories Doll at CH Postal Company, where she writes letters for people. Violet once fought in the war as a child soldier, where she met her major, Gilbert Bougainvillea.

She has always been inept in understanding emotions and wants to understand the meaning of “I love you,” said Gilbert during the war’s battle.

Violet is a beautiful young woman with long pale blonde hair and bright blue eyes. She has long bangs hanging over her face and longer sidebangs falling down to her shoulders. Her hair is styled in a braided bun, tied by a red ribbon. 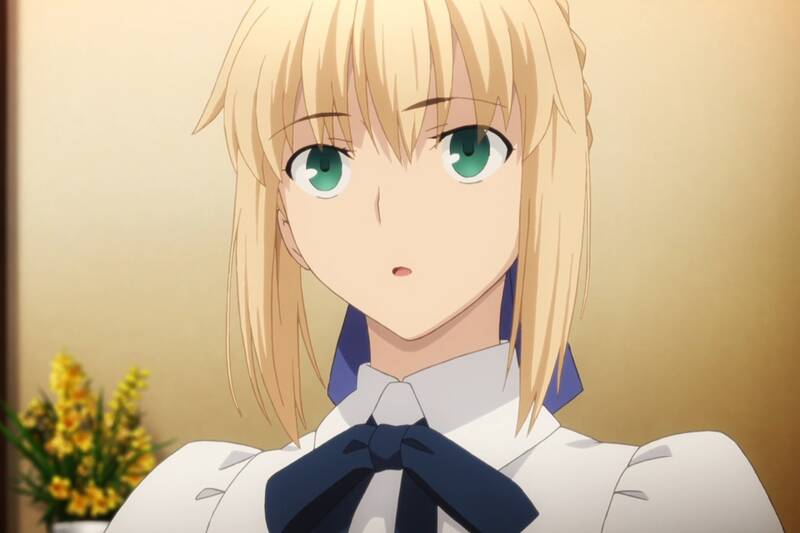 Saber is a Saber-class Servant who participates in both the fourth and fifth Holy Grail War. She is a heroic spirit who, in her life, was originally Artoria Pendragon, the king of Camelot. Saber is a very powerful spirit and a master swordsman, and one of the strongest characters in the Fate franchise.

Saber has long blonde hair and green eyes. True to her character as a warrior and a disinclined former ruler, she keeps her long hair neat and tidy in an intricate bun, surrounded by braids. She also has an atypical ahoge on top of her head. Saber is undoubtedly one of the best anime characters with long blonde hair. 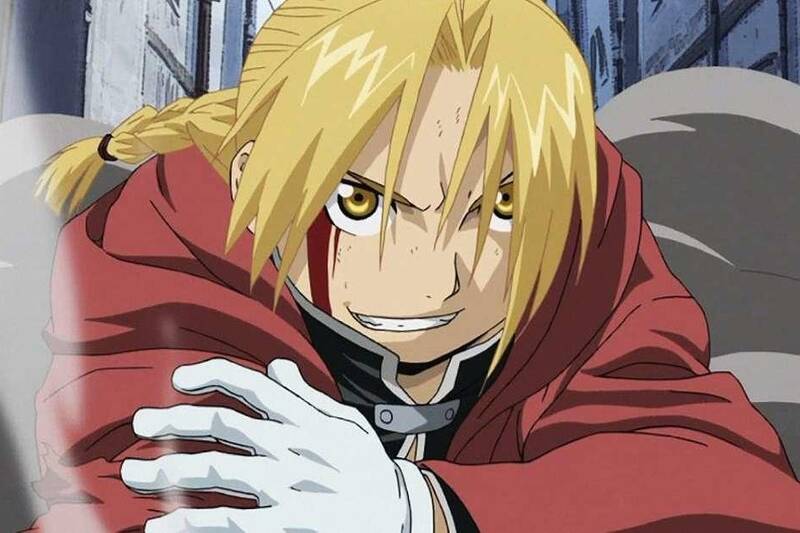 Edward Elric is a state alchemist who is popularly known as the Fullmetal Alchemist. He is also the elder brother of Alphonse Elric. Edward lost his arm and leg during a failed human transmutation to resurrect their dead mother, while Alphonse lost his whole physical body. Now the brothers look for a way to get their bodies back.

Like many Amestris citizens, Edward has blonde hair. His hair is long, reaching past his shoulders and to his back. He keeps his blonde hair in a braid and styles the front of his hair in twin-parted bangs.

5) Kaori Miyazono (Your Lie in April) 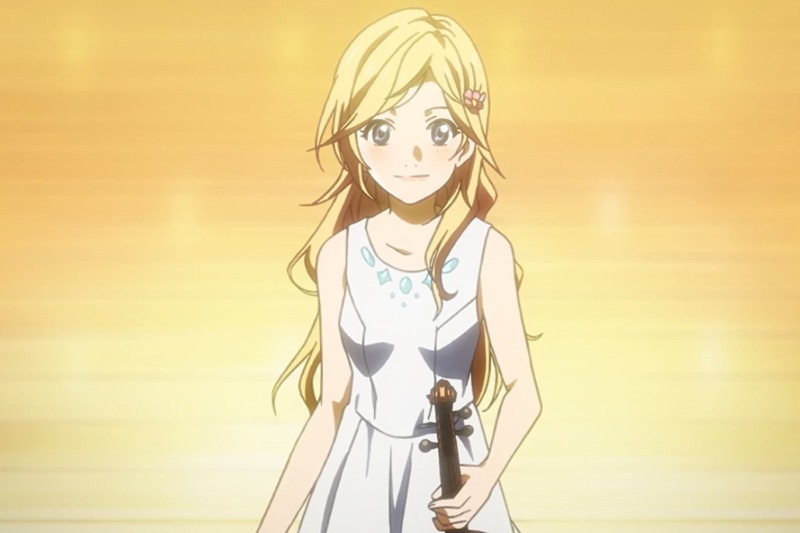 Kaori Miyazono is a junior high school student who goes to the same school as Kousei, Tsubaki, and Ryota. Kaori is a passionate violinist who plays with all her heart and follows her own music rather than being perfect in technicalities. With her influence, Kousei overcomes his fear of playing piano professionally again.

Kaori’s character design reflects her beautiful personality. Her long, wavy, blonde, and somewhat messy hair falls along her back in an uninhibited manner.

She often styles her hair with cute flower hair clips or ties it up in a high ponytail. Kaori’s beauty and charm earn her a spot on our list of 15 anime characters with long blonde hair. 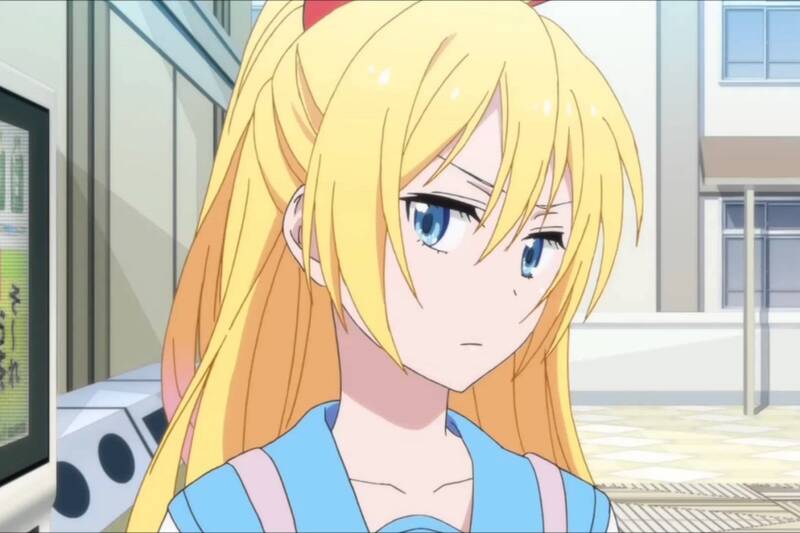 Chitoge Kirisaki is a high school student and the daughter of Adelt Wogner Kirisaki, a gang leader. Chitoge agrees to fake date Raku Ichijo, the son of the leader of a rival gang, to stop a gang war breaking out between the gangs. She later falls in love with him.

Chitoge is a very pretty girl who is admired by her classmates for her foreign looks. She has long, bright blonde hair styled in a high ponytail and accessorized with a red ribbon tied in a bunny shape. The lower part of her long blonde hair is pink, giving her a unique look. 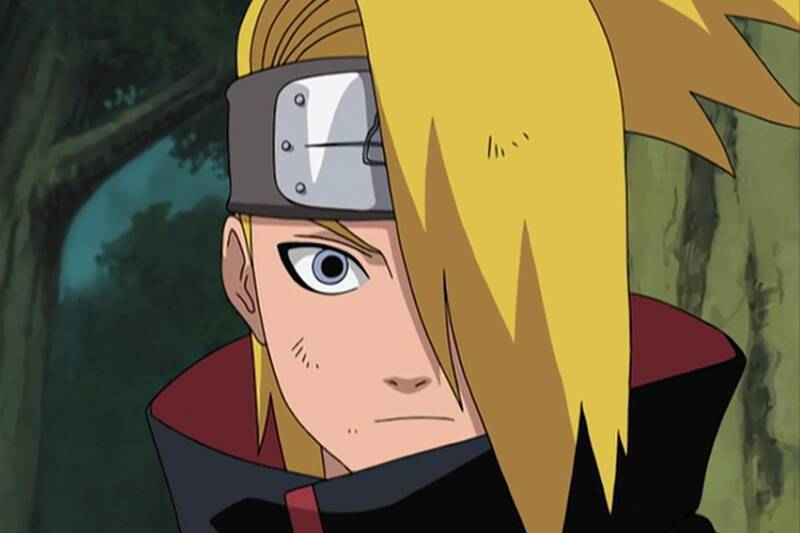 Deidara is a member of Akatsuki and is partnered with first Sasori and then Tobi. He was originally from Iwagakure, where he was frequently reprimanded for his blowing up things. After leaving the village, he was free to pursue his explosive techniques. He calls his explosions art.

Deidara is one of the most stylish characters in the series. His long bright blonde hair covers the whole left side of his face, with the bangs hiding his eyes. The rest of his hair he keeps in a high ponytail. While soaring in the sky on his clay bird, his flowing hair is a sight to see. 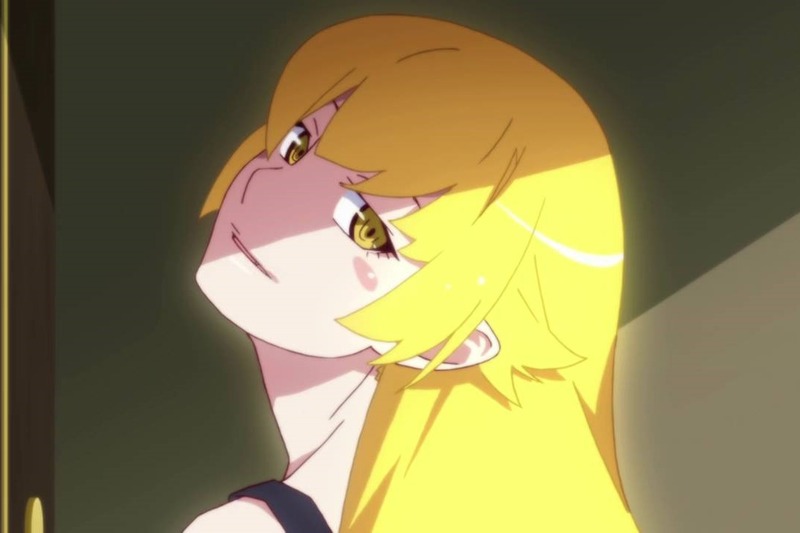 Shinobu Oshino is an immortal vampire who is always seen with Meme Oshino. She was originally a human princess known for her beauty and was cursed for causing everyone to commit suicide. She was later turned into a vampire named Kiss-Shot Acerola-Orion Heart-Under-Blade.

Shinobu’s beauty was the talk of the town when she was a princess, and she looks never diminished during her years as an immortal vampire. She has long blonde hair that stays up like spikes at the end. Her bangs are short and end above her head. Shinobu’s interesting character only enhances her beauty. 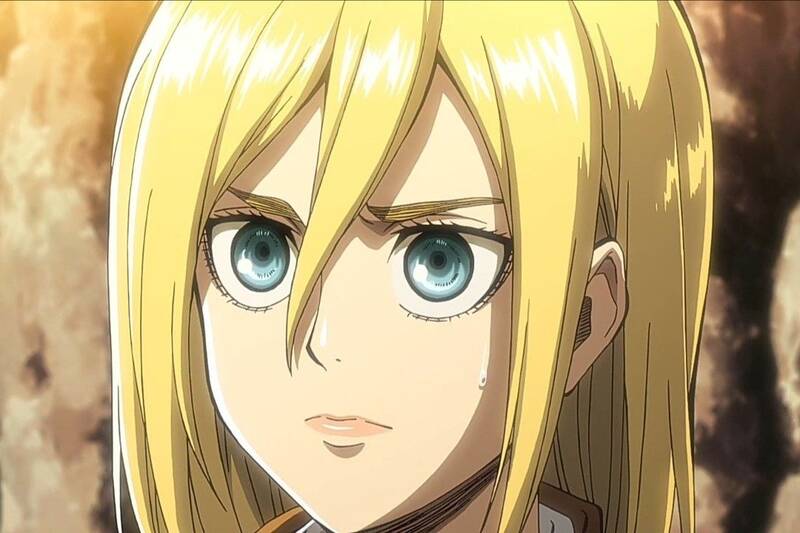 Historia is introduced in the story as Krista Lenz, a kindhearted girl who is brave enough to enlist as a Survey Corp soldier. She is later revealed to be Historia Reiss, the illegitimate daughter of Rod Reiss and the heir to the throne of Paradise Island. Historia was also very close with Ymir and cherished their bond.

Many characters in the series, particularly Reiner, Armin, and Ymir have expressed their awe at Historia’s beauty, often calling her a goddess in their minds. She has long, straight, blonde hair, which she keeps untied. After becoming the queen, her hair is styled neatly. 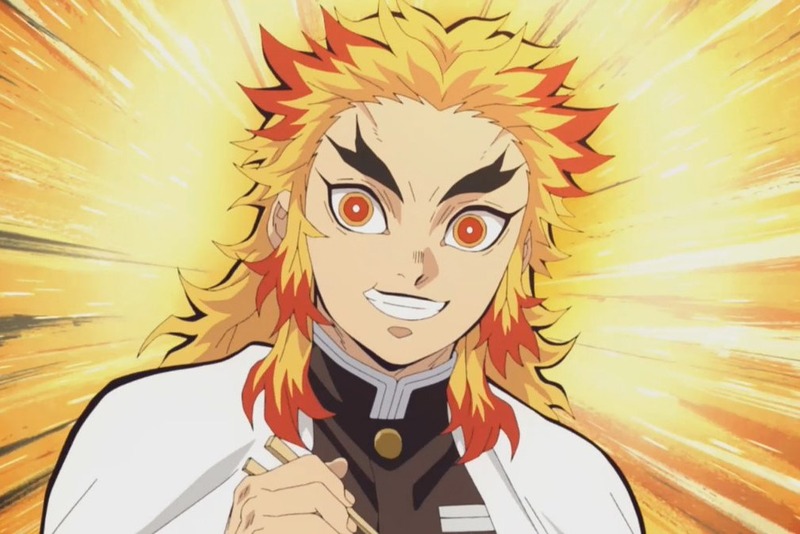 Next on this list of anime characters with long blonde hair is Kyojuro Rengoku. He is the Flame Hashira. He is a very strong Demon Slayer and the son of the previous Flame Hashira, though he learned the Flame Breathing techniques all by himself from old books.

A man of honor and kindness, Rengoku becomes a mentor for Tanjiro, Zenitsu, and Inosuke. Like most characters of Demon Slayer, Rengoku has an interesting appearance. He’s very flamboyant in his looks.

He has long, wavy, blonde hair that stays spiky around his head. His hair is multicolored, blonde with red edges, resembling flames. He’s certainly one fiery guy! 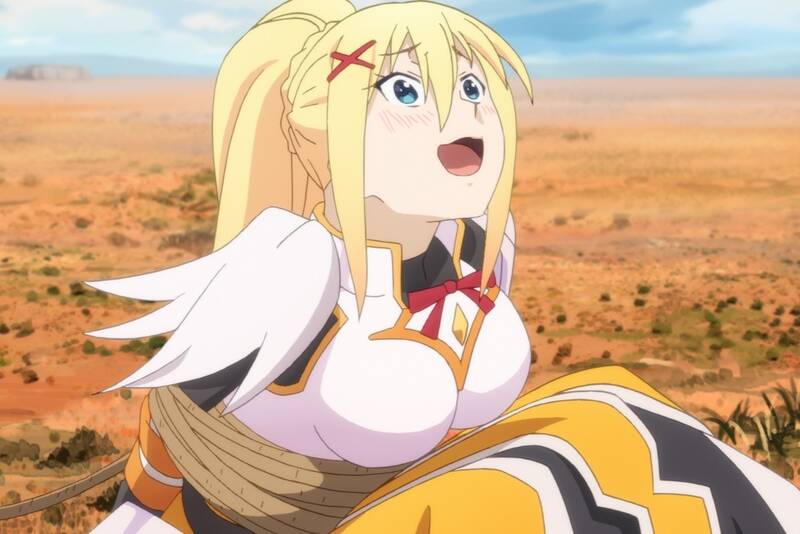 Darkness is a crusader who joins Kazuma’s extremely strange group of heroes. She’s a masochist who’d rather be ravaged by monsters than battle them. She’s also very strong and has powerful offense and defense, though that rarely comes as an advantage due to her personality.

Darkness is a gorgeous and busty woman who Kazuma lusts after in secret. She has long, straight blonde hair styled in a high ponytail. She also wears a red, cross-shaped hair clip on her hair. 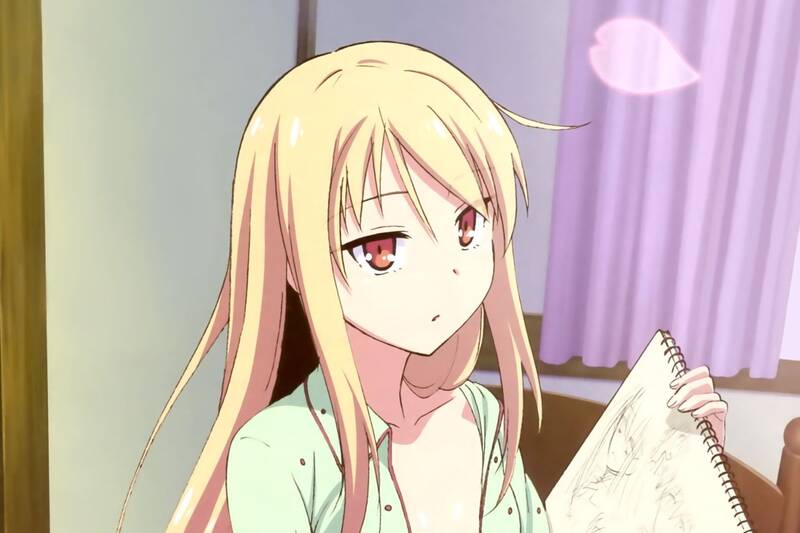 Mashiro Shiina is a world-famous artist who transfers to Suimei University of Arts (Suiko) to learn how to draw manga. She lives in Sakura Dormitory along with other troublesome but talented students.

Mashiro is a genius in art, but she is unable to do basic everyday things and take care of herself. Her inability to process emotions slowly gets better with the help of Sorata and others.

Mashiro is a very pretty girl, though she is totally clueless about her attractiveness. She has long blonde hair reaching down to her waist. She always keeps it untied and hardly cared for it. But that only makes her more charming. 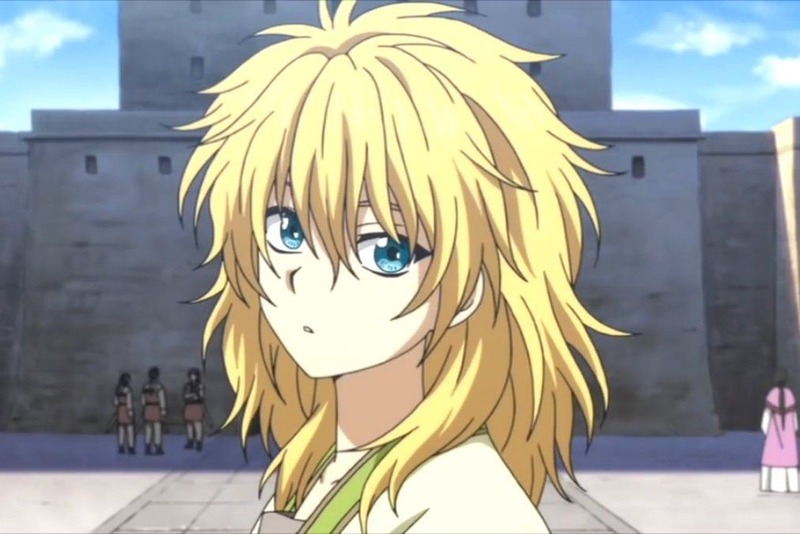 Zeno is one of Yona’s companions on her journey to reclaim her kingdom and her position. He possesses the blood of the Dragon Deity and is the Yellow Dragon, one of the Dragon Warriors, and is later revealed to be the Original Ooryuu (Yellow Dragon) who served King Hiryuu.

Zeno is a cheerful person with childlike looks. He has long blonde hair that stays unkempt on his head and reaches past his shoulders. His bangs are long and fall over his face messily. He wears a green cloth around his forehead as a headband, though it doesn’t restrict his bangs. 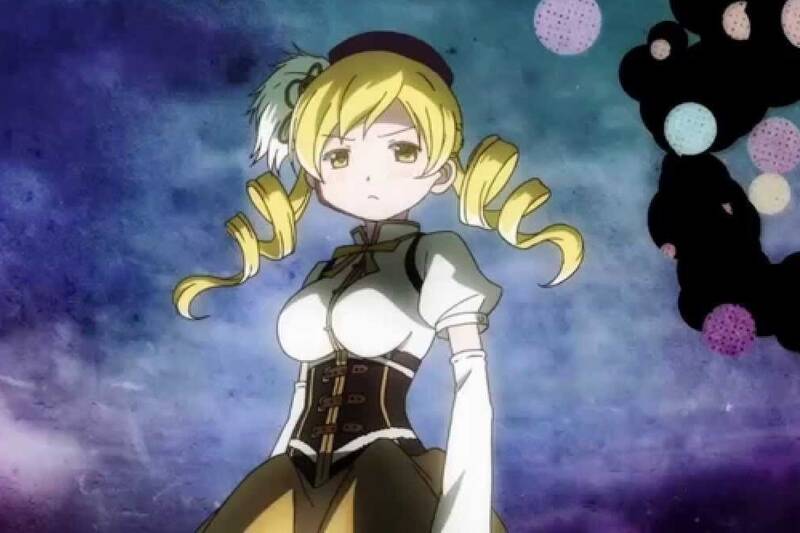 Mami has long blonde hair, which she styles in two twin twirly tails. In her Magical Girl form, she wears a black hat with a white fur tail and a dark flower-like accessory on her hair.

Mami’s appearance gives a sister-like vibe which is intentional, given her role in the story. She’s our second last entry of anime characters with long blonde hair. 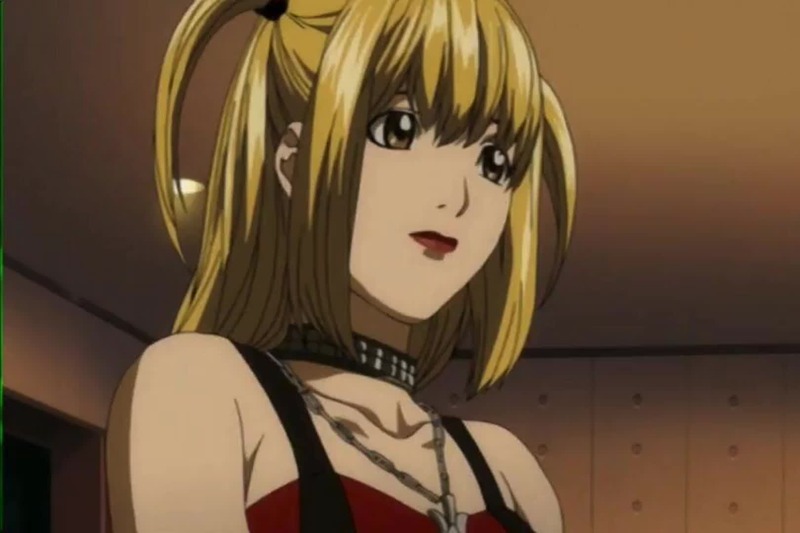 Misa Amane is a pop star who is, unknowing to everyone, the second Kira. After getting her Death Note, Misa exchanges half of her life for the Shinigami Eyes. She is obsessed with Light Yagami, the original Kira, and claims to be in love with him. Using her affections against her, Light makes her a pawn in his game to delude L and the police to his advantage.

As a pop star, Misa is very stylish and pretty. She has long, straight blonde hair with bangs falling over her forehead. Misa styles her hair in two little ponytails while leaving the rest falling over her shoulders. She also often wears gothic clothes and accessories.

With this, we’re done with our list of 15 anime characters with long blonde hair. If you like this article, don’t forget to check our other similar articles.