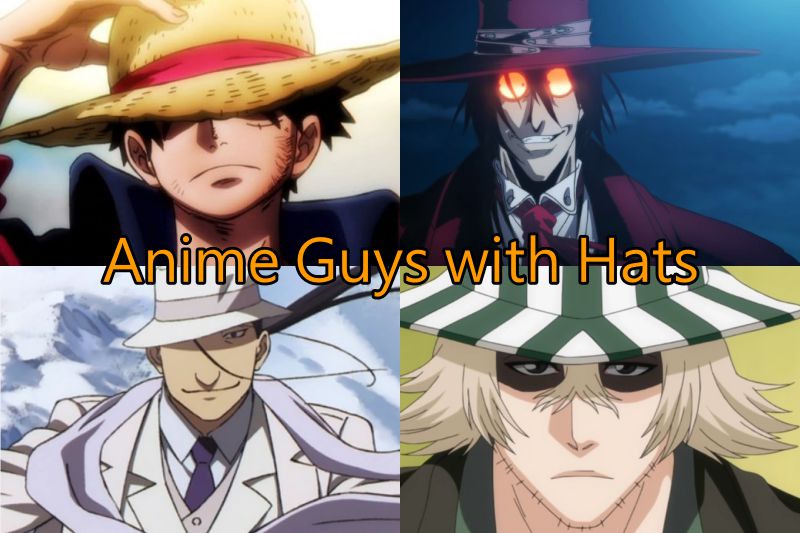 Hat is a timeless piece of article and one of the best accessories to pair your outfits with. Hats in anime are not only stylish but also very significant to the character in certain cases. So, we’ve decided to take a bunch of them and make a list of the 15 best anime guys with hats.

We’d like to clarify that this is a list and not a ranking, so the numbering means nothing. Also, we’ve decided to take only one character from one anime since if we begin to pick several characters from a single anime, the list will lose its variety.

With that out of the way, let’s find out how the list looks. 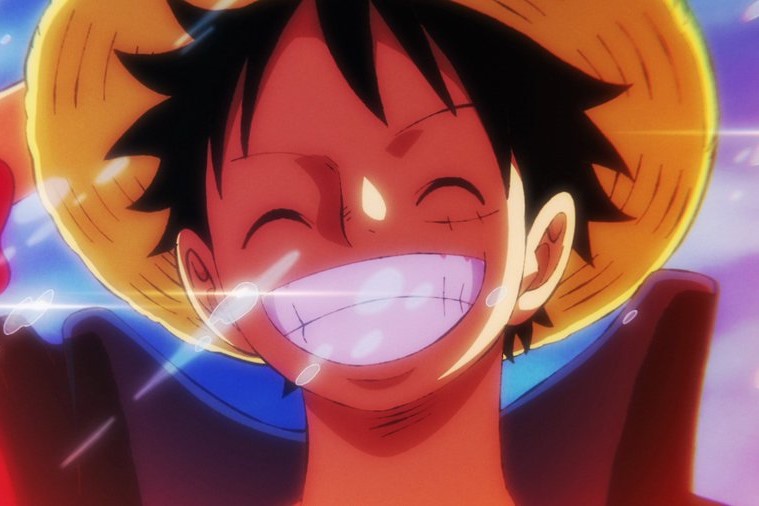 Monkey D. Luffy is a pirate from East Blue who sets out on an adventure to find One Piece and become the King of Pirates. Joining him along the way is his merry band of misfits, each with a dream of their own. Luffy’s journey to find One Piece is filled with laughter, bonds, and battles, as well as a whole lot of adventure.

Luffy’s straw hat is not only his most iconic piece of the article but also his most precious one. The straw hat was given to him by Shanks, the man who ignited the passion of being a pirate in his young heart and saved his life.

Luffy’s straw hat is also how his pirate crew is named and how he is infamously dubbed by the press: Straw Hat Luffy. 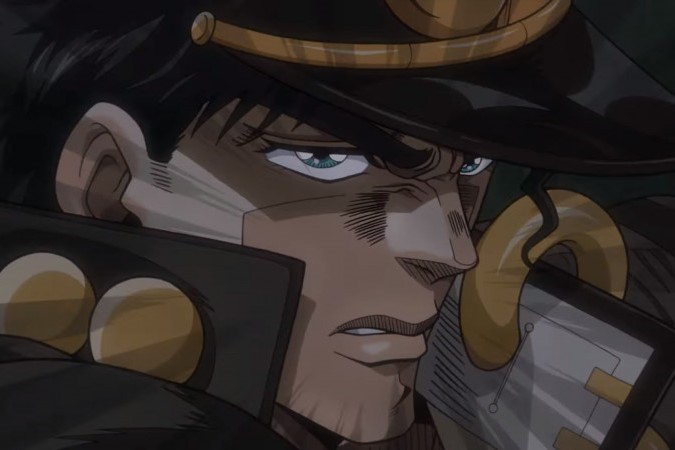 Jotaro Kujo is the third JoJo of the franchise and the protagonist of Part 3: Stardust Crusaders. Jotaro is a descendant of Jonathan and Joseph Joestar, who sets out to Egypt to save his mother and end DIO, the arch nemesis of the Joestar family once and for all.

Along with a long gakuran and golden chain around his neck, Jotaro also puts on his iconic cap. The cap is embellished with a golden button near the center of it and a rectangular golden plate with a flattened hand design on its left. Rough and tough, the cap is a worthy accessory for the Stand user. 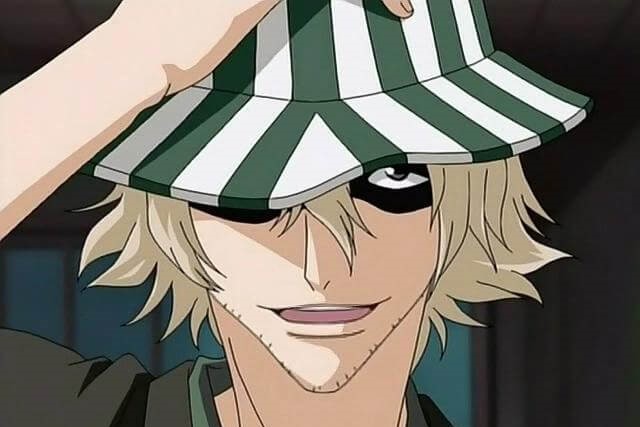 In Bleach, Kisuke Urahara is a man who is as strange as he is brilliant. The former Captain of the 12th Division of Gotei 13, he was banished from the Soul Society after being framed by Aizen. He’s a genius scientist who trained Ichigo before the Substitute Shinigami ventured to the Soul Society to rescue Rukia.

Kisuke’s lazy dressing style is one of the many idiosyncrasies of the enigmatic man. His most iconic pieces of articles are his beige cane which is actually his Zanpaukto, Benihime, and his green and white striped hat. His odd clothes and silly antics hide the fiercely sharp wit of Urahara and what he is capable of. 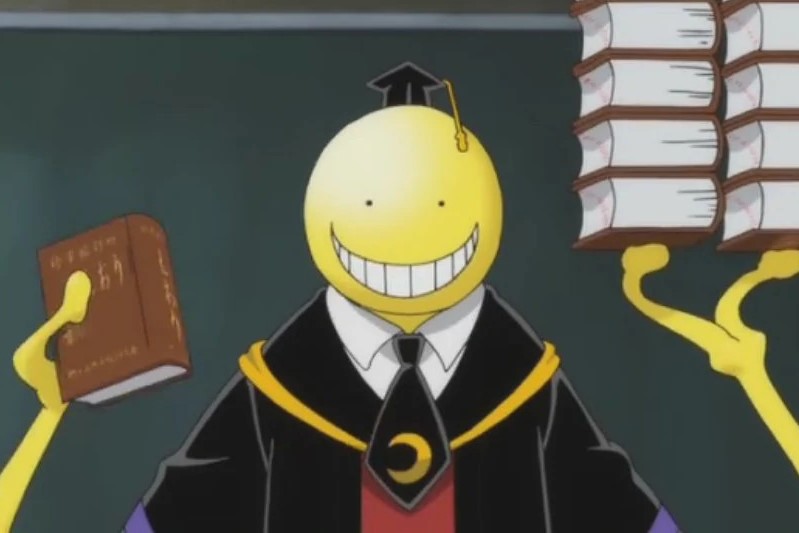 Koro Sensei is a being who is claimed to be the one responsible for destroying most of the moon, leaving it in a permanent crescent shape. He currently is the homeroom teacher of Class 3-E of Kunigigaoka Junior High School, determined to teach his students to the best of his abilities.

Koro Sensei’s appearance is a weird one. He looks like a yellow octopus with beady eyes, an expressive mouth, and tentacle-like appendages. He wears a black academic robe over his strange body and a cute little black hat on top of his bald head. It looks quite adorable, really. 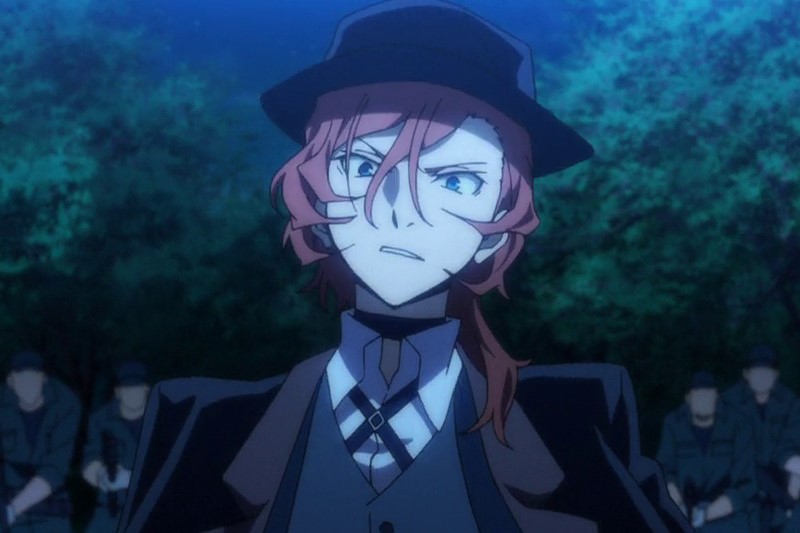 Chuuya Nakahara is a high-ranking executive of Port Mafia and Dazai’s old partner in the Twin Dark team during the latter’s time in the mafia.

Chuuya is a very powerful man with a gravity-related Ability called Upon the Tainted Sorrow. He’s also the host of Arahabaki, the God of Calamity.

Gorgeous and stylish, Chuuya’s only woe regarding his looks is his height. He is also a connoisseur of hats and prefers to accessorize his outfits with them.

His hat is also very fashionable: it’s a black hat with a red hat band and a silver chain hanging along the brim of the hat. Needless to say, it’s a look worth drooling over. 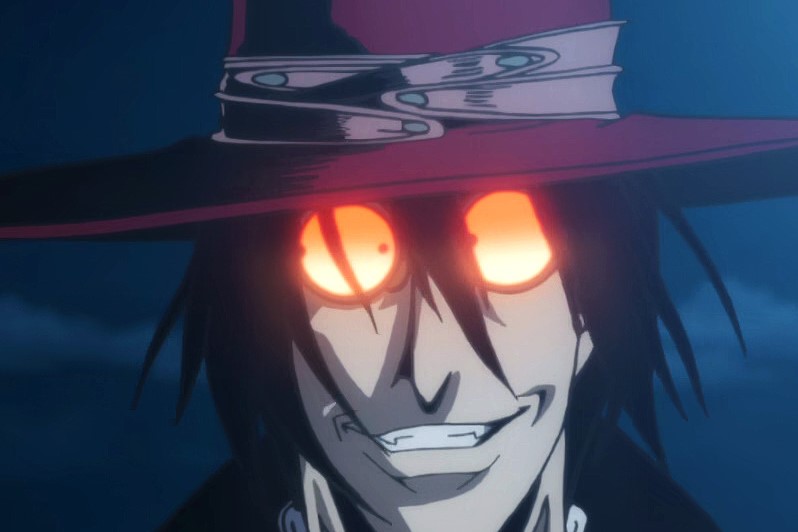 There’s something wild and frightening about Alucard’s appearance. While he can change his appearance at his will, his most common form can be seen clad in red Victorian clothes with a big red fedora hat.

The Victorian outfit paired with the scarlet hat and that nefarious smile of his, Alucard never fails to send a chill down our spine.

7) Sinbad (Magi: The Labyrinth of Magic) 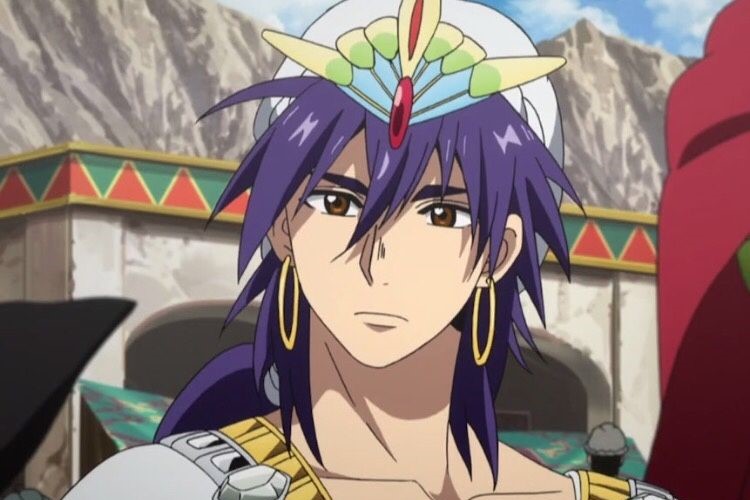 Like the previous entry on our list, Sinbad is also one of the most powerful men in the Magi universe. His resume is a lengthy one, including being the king of Sindria and the leader of the Alliance of Seven Seas.

Sinbad is a very attractive man, and his outfit only makes him even more irresistible. Along with lots of jewelry and white robes, he wears a matching white hat over his purple hair. His confident attitude and fierce determination only add to his irresistibility. 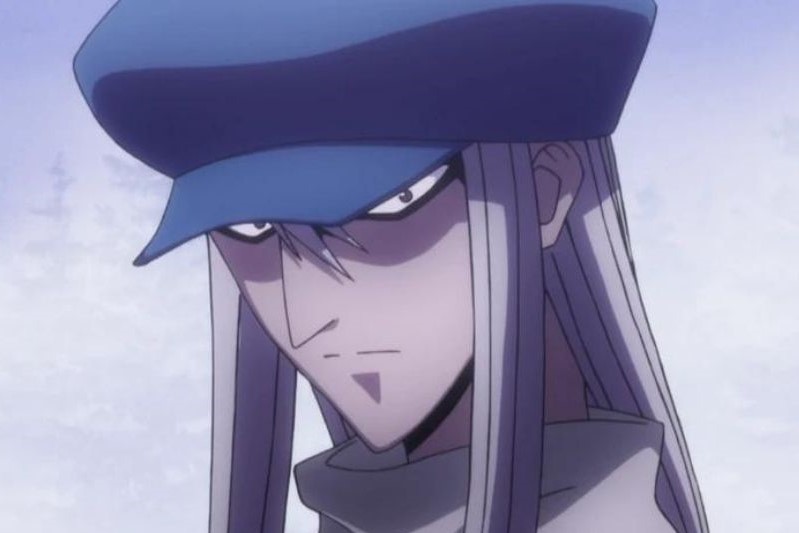 Kite is a Contract Hunter and a former student of Ging Freecss, the father of Gon. He met Gon three years prior to the current timeline at the start of the series and later is found by the boy who accompanies him to NGL Autonomous State to investigate the Chimera Ants.

A good-looking man in his prime, Kite wears practical clothes fitting his occupation paired with a light blue beret-like hat worn over his long white hair. The blue hat adds a splash of color to his muted color scheme and is a pleasing addition. 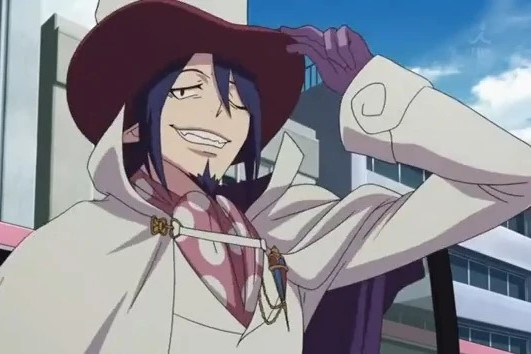 Mephisto Pheles is a man of many names and many frames. He uses the name Johann Faust V as the Principal of True Cross Academy, all the while hiding his true identity as Samael, the second strongest of the Eight Demon Kings. He’s also the man to recruit Rin in his Academy.

Mephisto Pheles is a very tall man who has a penchant for wearing dramatic clothes. He wears a flashy white ensemble with a tall white hat with a hat band of red and purple color scheme. This prompts Rin to dub the man the Clown. 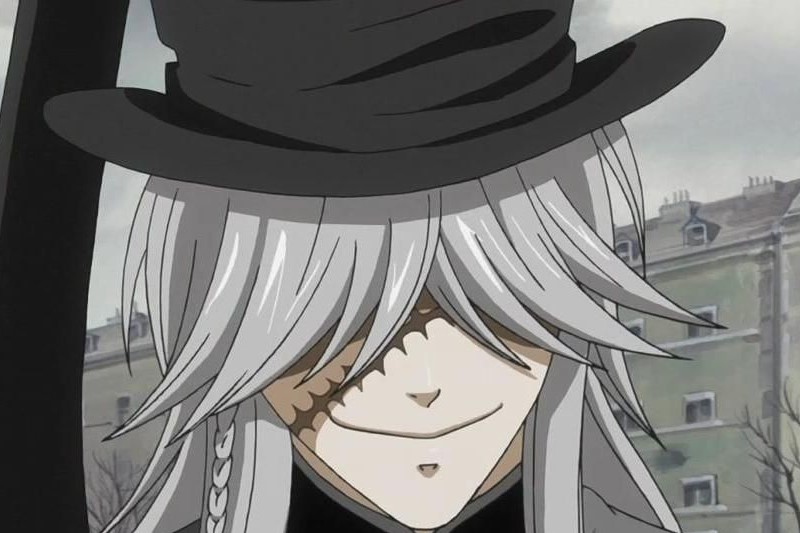 Undertaker is a former Grim Reaper who was also once an Aristocrat of Evil and has been an informant for the Phantomhive House since the time of Vincent Phantomhive, Ciel’s father. For normal society, he’s a funeral director in London.

Eyes hid away under his long bangs, Undertaker has a mystique around him that intrigues us from the get-go. His gothic Victorian clothes of long dark robes and a gray scarf around his shoulders are coupled with a crooked top hat. Not a bad look for a very bad man. 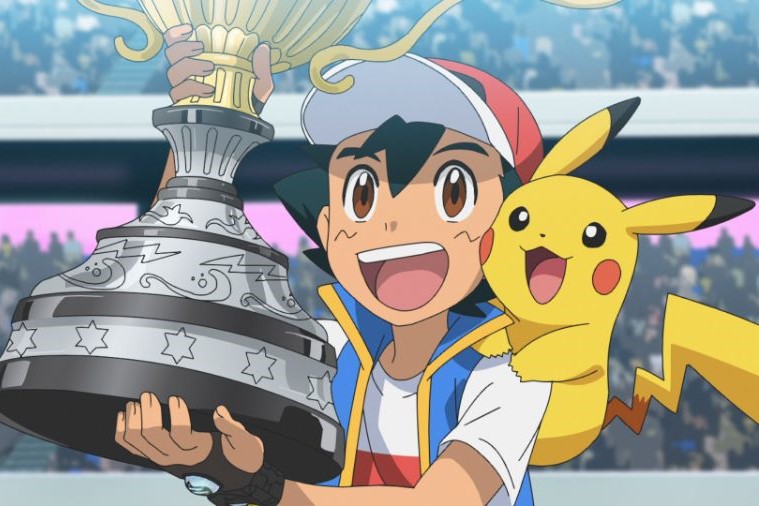 What can be said about Ash Ketchum that isn’t already known? An eternally 10 years old boy who sets out on a journey to become the world’s best Pokémon master and, more iconically, “to catch ’em all.” Joining him are his group of companions and Pokémon and the ever-adorable Pikachu.

Ash’s outfit may change with the season of the anime, but his red cap stays as loyal to him as Pikachu. The iconic red cap with a black pentagon designed on it and a white visor is just as familiar to us as Team Rocket’s passionate declarations. 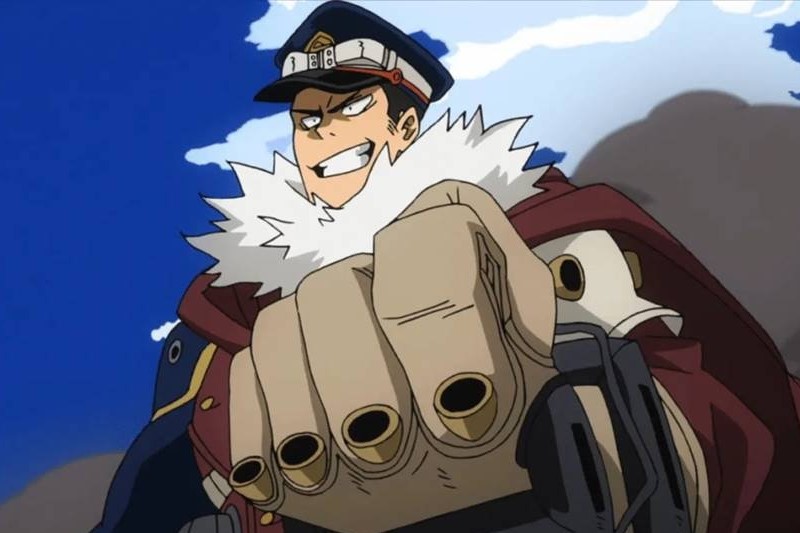 Inasa Yoarashi is a first-year student at Shiketsu High School, aspiring to become a hero. He has a wind-based Quirk called Whirlwind and has chosen Gale Force as a fitting hero name. A former fan of Endeavor, Yoarashi has a thing or two to say about proper behavior.

As a proud student of Shiketsu, Yoarashi likes to wear his school’s signature hat with both his school uniform and hero costume. The hat is a military-type and has the school’s emblem on it, along with a white ribbon around it above a thin red hat band. It pairs quite well with his hero costume. 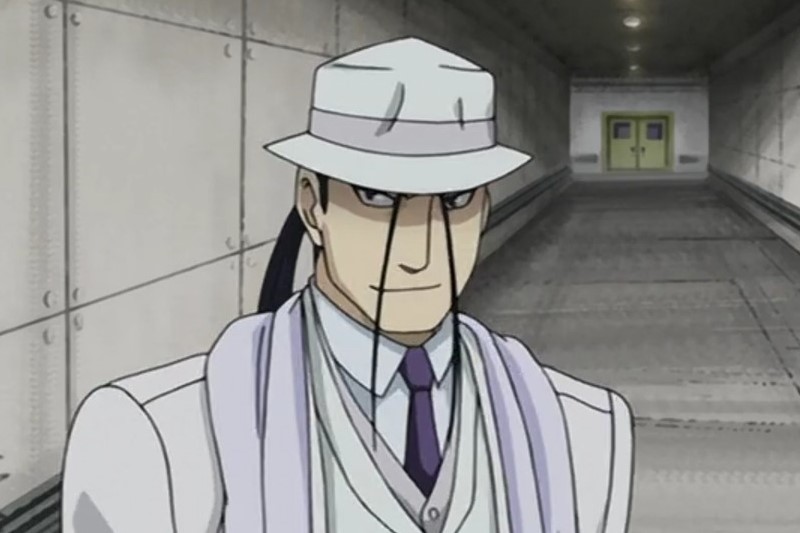 Solf J. Kimblee is a state alchemist famed as the Crimson Alchemist who fought in the Ishval War and killed hundreds of Ishvalans with sadistic glee. Kimblee is a man of little morality and is absolutely self-serving with no loyalty to anyone.

A man whose heart is blackened as char, Kimblee likes to wear pristine white clothes after being released from prison. He pairs his three-piece white suit with a matching white fedora. The clean all-white getup looks all the more shocking against his psychopathic destructiveness. 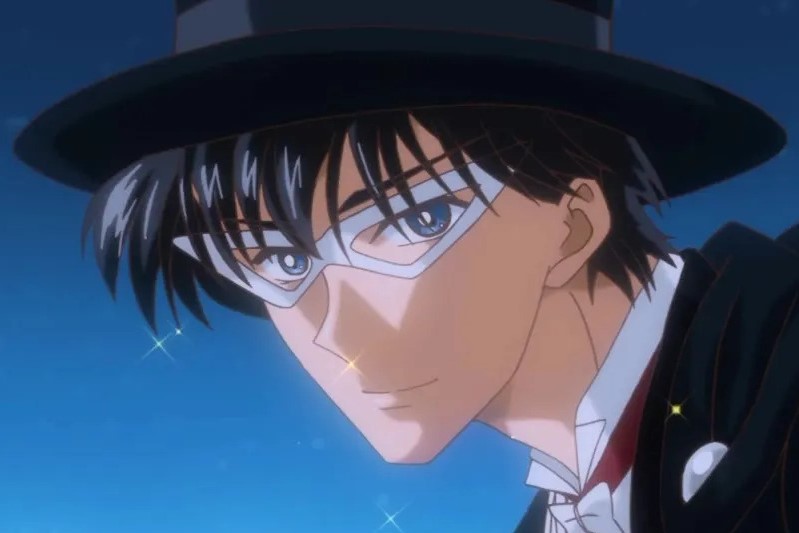 While donning the identity of Tuxedo Mask, Mamoru wears a classic three-piece tuxedo with a black cape with red inside and a black top hat. Armed with his charm and a red rose, Tuxedo Mask is a heartthrob to look out for. 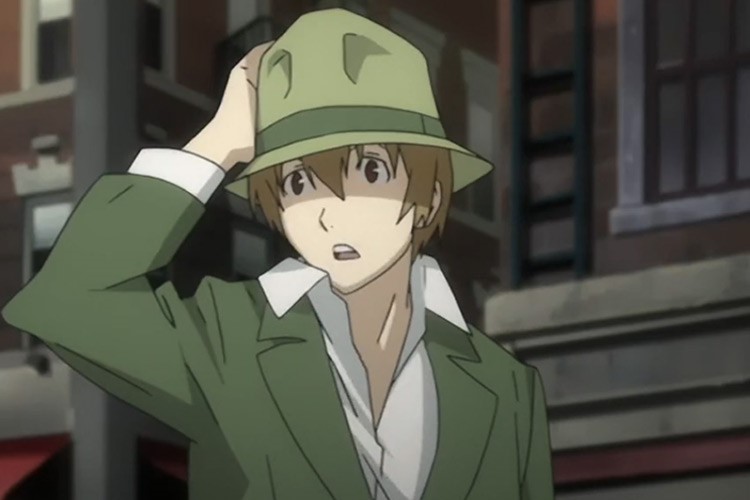 Firo Prochainezo is an immortal and the youngest executive of the Martillo Family Camorra of Manhattan. He gained his immortality after drinking Szilard Quates’ immortality elixir in 1930 at his own celebration party.

As an immortal, Firo has kept his youthful looks. In 1930, he wore era-appropriate clothes, consisting of a green suit matched with a green fedora hat. By the time 2002 comes, Firo has already been fed up with his boyish looks and opts to don glasses to appear older.

There we go, our list of 15 best anime guys with hats. These guys are keeping hats in fashion, and that, too, with so much coolness. Hat’s off to them!