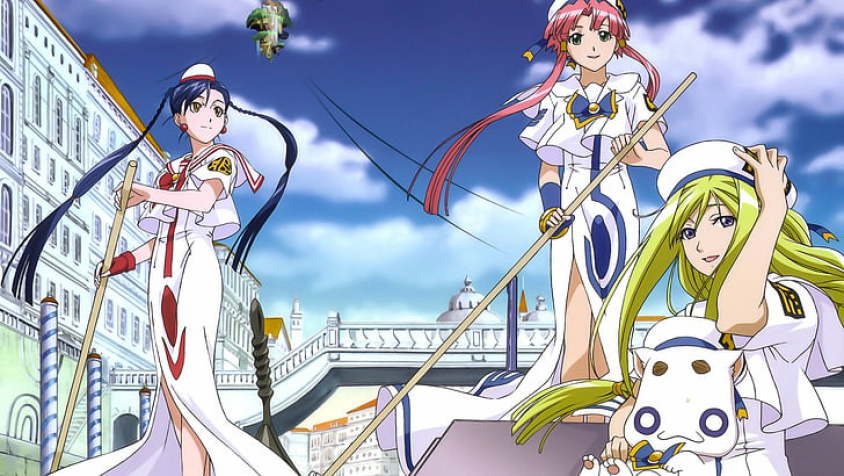 The Aria series initially began its release in 2001 under the manga named Aqua. It was Illustrated and written by Kozue Amano. The series later continued under a new name called Aria in 2005. Its new name also gave rise to its animated series, with its first season being titled Aria The Animation. Its anime series is directed by Junichi Sato, Kenichi Takeshita, and other assistants under the production house of Hal Film Maker. The production house later released 2 more seasons, 2 OVAS, and a picture drama.

The slice of life and sci-fi general anime picks up a light-hearted yet upbeat pace surrounded by new lyrics to the opening of every episode of the first season. Many other adaptations of this series have been made by other studios, too, and some have even been considered canon. Although this anime is new to the Western world due to the recent dubbing of its animation, the Japanese have a special place in your heart for this particular type of anime.

Where to Watch Aria Anime –

The total number of episodes of the three season comes up to 52 episodes, not including the movies of the specials. However the extra specials do add a special touch of character depth and understanding as they continue the main plot and so fans are encouraged to watch them too.

Fans can watch the three seasons of this series on the official Crunchyroll website  website. However, since its OVAs and other specials like the movies can’t be viewed on official websites,  fans can view them on private websites like Gogoanime.

Where to Read Aria Manga –

Since the Aria series first began in a manga named Aqua and then continued the story under a new name called Aria. And so,  to get the whole story and understand character motives, fans should read both Aqua and Aria. Both series have been written by Kozue Aman, so fans can rest easy if they had doubts about the art style. Aqua consists of two volumes while Aria consists of 12 volumes.

Currently, since neither of the two manga by Kozue Amano are available on official sites, fans can read both manga on private websites like Mangago. And with no news of a new season, fans can easily catch up to the manga and the ongoing series with hope for an announcement.

So now that you’ve seen the watch order, we’re sure you’re wondering how long it’ll take you to finish the series. Don’t worry, we’ve done all the math for you so you can now slip this anime into your schedule. Below, we’ve noted for you each title’s duration in the series (including it’s opening and ending theme songs) and the total time taken for the entire series.

We highly recommend that you delve into this amazing and relaxing slice of life anime as soon possible. However, we would also like to suggest that fans exert caution during their series binges, and remember to stay hydrated.

The plot of the series takes place on the planet Mars that has been terraformed into a water planet. It is now inhabited by humans that work and live on the planet through waterways. The story is set in the city of Neo-Venezia, which is a harbor city that closely resembles Venice. In the city resides young girl Akari who is an undine that is a waterway city tour guide. As Akari meets her friends Alice and Aika, the three girls aim to do their jobs the best they can in order to provide satisfying experiences to the customers and tourists.

The slice of life anime goes about a calming pace in order to focus on the little things of Akari’s life that bring people happiness. Every scene of her slightly ditzy personality and the calming animation of clearwater ensure a relaxing experience. Further, as the anime is sprinkled with a lot of Ara Aras and funny little skits, a mundane everyday life somehow seems even more interesting. The little rivalry between friends and the cute interactions leave you with a strange touch of nostalgia. And even the quick, witty banter and the weird senpais are sure to set one’s heart at ease.

The pace at which the show is taken ensures that Akari’s interactions with the customers and their stories highlight the importance of new beginnings and experiences. As each tourist grants us insight into their lives while improving Akari’s growth as a person, the anime leaves a very satisfying feel before it ends, thus leaving fans wanting more. We’ll be back again with another article to keep you informed, so until then, stay safe, stay tuned, and stay hyped.