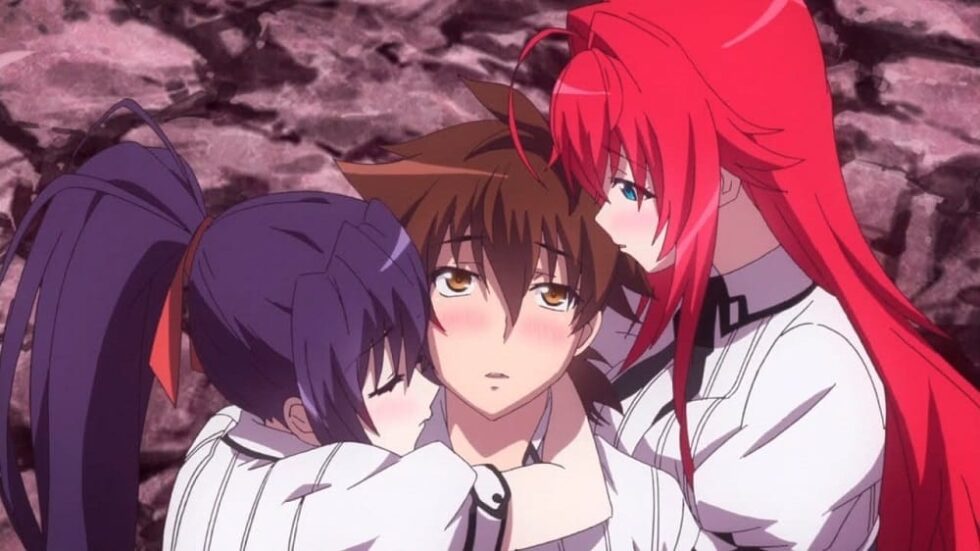 Today we bring you an article on the Top 15 Best Ecchi Anime on Crunchyroll, Netflix & Funimation 2021. Here we will mention a few top-tier anime available on the mentioned sites under the ecchi genre.

The Ecchi Genre mostly focuses on indirect mature scenes played out in not-so-serious contexts. The scenes of this genre are mostly directed as fan service to the male gaze. Therefore the sub-genre is most common in shounen anime.

The most well-known Ecchi anime is most probably Highschool DxD. This is most likely due to its well-established fanbase and good fan service.

So without further ado, let’s get into the Top 15 Best Ecchi Anime on Crunchyroll, Netflix & Funimation 2021.

Kindly note that the titles mentioned are ranked according to their myanimelist ratings.

Plot – A young boy Kouta is known to be troubled by supernatural spirits especially those of female animal spirits. He soon moves from a small countryside to his grandmother’s place in the big city for high school.

Here attracts a small harem of various spirits and other youkai. And so the series unfolds a story of confused feelings and supernatural beings.

Plot – This series revolves around Takashi Kimuro and a small group of high school classmates. These youngsters along with the school nurse struggle in a post-apocalyptic world where people have now been turned into zombies.

And so with multiple struggles and narrow escapes from death, the action is never-ending. To add to that is also a huge plethora of fan service and blossoming relationships that help them survive the post-apocalyptic world.

Plot – This series focuses on Issei Hyoudou a high school pervert who specializes in peeping, dreaming, and waiting for a harem. Therefore when a beautiful angel asks him out, he doesn’t dare refuse.

However, he is soon revived by Rias Gremory as her servant. And now as a part of the schools Occult Club he battles to survive and adjust to this world of demons.

Plot – Kintaro is a hard-working youngster who travels from job to job on his trusty bicycle all over Japan. Each job grants him multiple educational experiences and also ensures his encounter with multiple women.

And so as he meets a new woman with every job, he leaves them with a changed life and a new experience.

Plot – Souma Yukihara has grown up as a sous chef under the direction of his father in his restaurant. However, when his father decides to shut it down and leave, he sends Souma to the Tootsuki Culinary Academy.

Since he is fairly skilled, he has no complaints but the Academy has multiple high stake cooking battles called Shokugeki. This not only entices him but also helps him reach the goal of surpassing his father.

And so the boy and his acquaintances face all challenges to produce world-shattering food.

Plot – Hyakkaou Private Academy is known for its rich students and its solid social hierarchy. This hierarchy is cemented through the money of the students gambled away at high stakes.

The losing students end up becoming the pets of the rich and so the hierarchy thrives. However, when Yumeko Jabami joins the school, she begins gambling and throwing the hierarchy into chaos.

Plot – the prestigious all-girls Hachimitsu Private Academy is now open to boys too. Thus when 5 boys are enrolled in it they find themselves surrounded by the female population.

Plot – The Seven Deadly Sins are a group of disbanded knights of the kingdom of Liones. However, they are now wanted for treason and thus have scattered through the land.

But with the kingdom in trouble from the Holy Knights, the third princess Elizabeth seeks power to save it. And so the legendary team is soon to have a reunion to help the kingdom.

Plot – Ryuuko Matoi wanders the land looking for her father’s assassin. And so she is very surprised when she stumbles upon one of his inventions, the Scissor Blade.

But as she is soon enrolled into Honnouji Academy and witnesses the brutal student council and their superhuman powers. However, as she gets in trouble with them she realizes that she has a similar power through the Scissor Blades. And so she continues her journey.

Plot – Sora and Shiro are shut-in NEET siblings who are well known online as the legendary gamer duo called Blank. However, through a strange email, the two are suddenly plunged into a different world.

Here they meet Tet, the God of Games. In this world, they realize that everything is focused on high-stakes that deal with problems through games.

And so the two siblings plan to complete the game, defeat the god of games and take his place.

Plot – Youkai Academy is an institute that helps monster students adapt and blend into the human world. Therefore, all students are required to attend classes in their human form.

But when Tsukune Aono’s parents unknowingly send him here he encounters multiple new experiences. And so has to now survive in a school of beautiful monsters most likely out for his blood.

Plot – One day a supernatural being known as a Sekirei named Musubi falls into Minato Sahashi’s life. And so, he is transported into the Sekirei world through a kiss.

However, in this new world, the previously worthless Minato now has his special abilities awakened. And so he and his partner, Musubi, must participate in battles of survival called the Sekirei Plan in order to survive.

Plot – The chief operative of the Evil Kisaragi corporation is tasked with a very important mission. But as he is known as overconfident Sentouin Rokugou is assigned an android called Alice Kisaragi.

And since he ends up messing up his mission and is forced to be an honorary knight by the princess. Thus he is ultimately forced to fight against the Demon Lord’s Army against his wishes due to a foolish mistake.

Plot – Chihiro Furuya has always been interested in the undead. So when his cat passes away he creates a reviving potion which is later consumed by Rea Sanka.

Expecting to eliminate, she instead survives even a cliff fall. And it results in her becoming a zombie who survives as his girlfriend who eats hydrangea leaves.

Plot – Koyomi Aragi has survived a Vampire attack and is now prone to finding girls plagued by the Supernatural. And if this wasn’t bad enough things get more complicated.

This is when a swindler, his girlfriend, and multiple other people get involved in his supernatural experiences. And so, thrown into confusion he must work to understand the supernatural world with the help of his acquaintances.

With this, we conclude with our article on the Top 15 Best Ecchi Anime on Crunchyroll, Netflix & Funimation 2021. Other than the websites mentioned above, fans can also watch ecchi anime on Hulu.

We would also like to point out that the titles mentioned are not the only anime available under the ecchi genre on the respective sites. Furthermore, the total number of episodes only includes those that are part of the main series seasons.

Well, that’s it from us. We hope we aided you with our Top 15 Best Ecchi Anime on Crunchyroll, Netflix & Funimation 2021 article.

We’ll be back again with another helpful article to aid you, so until then, stay safe, stay tuned, and stay hyped.