Skip to contentHome » Watch Order » Where to Watch Highschool of the Dead? Watch Order Guide 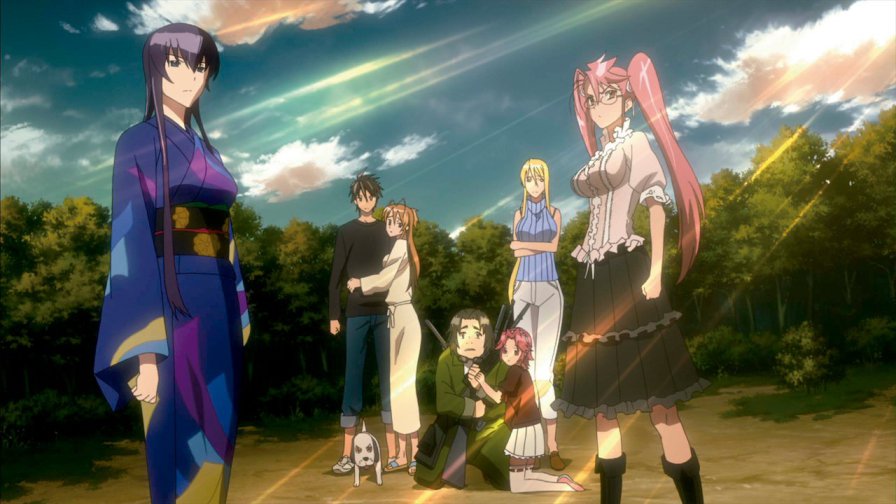 The series first began its journey in 2006 and, after many breaks, completed its seven-volume collection in 2013. The 2010 action-horror shonen series was animated by Studio Madhouse and directed by Tetsuro Akari. To say the least, the art style of both the anime and the manga are impeccable.

The depiction of emotions, gore, and character movements are accurate, and the generous provision of its ecchi genre draws fans in. Although the ecchi does have a confusing comedic effect, the fan service directed to the male gaze is balanced with a touch of romance.

Even the zombie apocalypse situation creates scope for multiple battle possibilities and occurrences of comedic human stupidity. The most impressive part of the series is that there is a logical explanation behind the defensive measures taken.

Each move made is one that people would expect to see in a post-apocalyptic setting, right from the human greed for material things to the need for friendships and connections.

Where to Watch Highschool of the Dead Anime –

Highschool of the Dead has a total of 13 episodes, including the OVA. Although it is a comparatively short series, it does provide a satisfying viewing experience.

The series often avoids ending an episode on a cliffhanger which means that you can take your time enjoying it. However, this doesn’t make the series any less exciting. The action-packed scenes and the sufficiently provided gore are sure to keep you company.

The Highschool of the Dead series is pretty well known by now and is thus available on multiple viewing platforms. Fans can watch the series on Crunchyroll, Funimation, Hulu, and Netflix (in select countries).

Where to Read Highschool of the Dead Manga –

The Highschool of the Dead Manga began in 2006 and ended in 2013. It has a total of 29 numbered chapters spanned over 7 volumes.

Like its anime’s animation, the Highschool of the Dead manga too has a unique and enticing art style. Unlike the anime, the manga begins with an immediate bang that is sure to draw you in as soon as you start.

Since the series is comparatively short, we’re sure you’re wondering if you could fit the series into your schedule. Below we’ve noted for you a list of the duration of each title of the series.

Kindly note that the duration of each title noted below includes the series’ opening and ending theme songs. We’ve also noted for you the total series duration at the end.

If you like adventure-based action that involves relationship building and, we highly recommend that you watch this anime. The animation, storyline, unique characters, and funny scenes will definitely get you hooked.

However, we’d also like to recommend that fans practice healthy viewing habits with healthy amounts of breaks.

Highschool of the Dead Plot-

The plot of this anime revolves around Komuro Takashi and is based in present-day Japan. It begins with the seemingly normal day for high schoolers which changes when the world is struck by a deadly pandemic that leads to a zombie outbreak.

The main acting survivors of the outbreak in the school are a bunch of high schoolers and the school nurse. Armed with makeshift weapons they now set off to find other survivors.

The first arc of the series begins with making allies from the high school and then moving through the city. In search of their families and any other survivors, they escape school and then are left to fend for themselves.

This series has a number of plot twists and is one of the few animations out there that begin with a bang in the first episode. All the main characters share complicated relationships with each other that often add depth to the impeccable character design.

Further, the plot of the anime is laced with a touch of romance and sprinkled generously with satisfactory fan service. The storyboard also shines a light on the non-zombie antagonists as it embraces cliches and builds on them.

Highschool of the Dead also makes you let out unexpected laughs at the most unexpected times and thus provides comedy. The characters also produce a harem situation with Rei Miyamoto, Shizuka Marikawa, Saeko Busujima, and Aya Takagi. Other members also include Kohta Hirano, a classmate of the Takashi, and Alice Maresato, a little girl.

Even as we meet a few of their families and watch them struggle together, the emotional connection the series creates doesn’t fade. So we’re sure you’ll definitely enjoy this short series.

With this, we end our Highschool of the Dead Anime Watch Order Guide article. We hope we’ve helped you navigate your way through the series.

We’ll be back again with another helpful article, so until then, stay safe, stay tuned, and stay hyped.