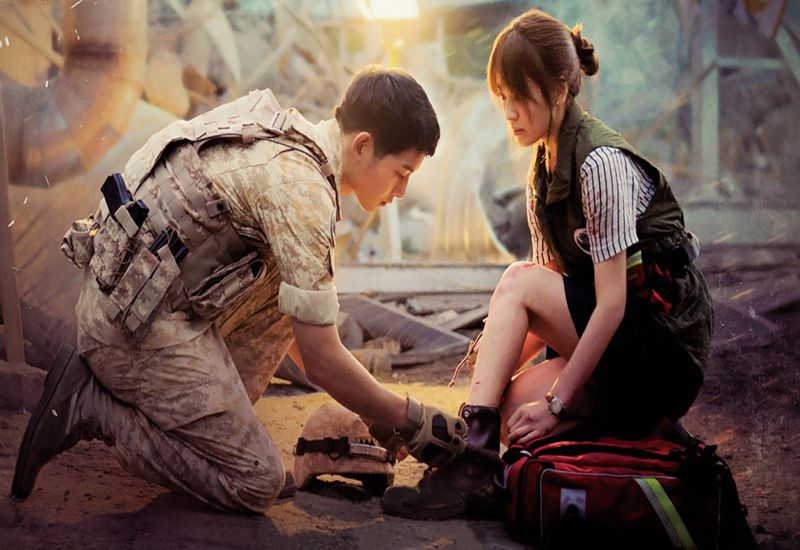 Outstanding K-Dramas with interesting storylines are definitely something that a Korean drama enthusiast will get in Hulu. Hence, in this article, we listed the Top 15 Best K-Dramas on Hulu with Interesting Story.

Due to the massive popularity of Korean entertainment content all around the world, video watching services are introducing more of it on their platforms. These dramas are giving tough competition to the western industries with their stories and exceptional acting skills from their talented actors.

Hence without further ado, we present the Top 15 Best K-Dramas on Hulu with Interesting Story.

This rom-com Korean drama is available on Hulu, and you must check it out. Da Da is a talented special effects makeup artist for the Korean entertainment industry.

After she breaks up with her long-time boyfriend, she meets Young Goo, a robot created to become the perfect boyfriend. Now, Dada gets involved in a love triangle between her ex-boyfriend and a humanoid boyfriend.

This K-Drama follows the story of two musicians who have a deep love for their music. We see Lee Shin, who is a vocalist in a band and also a modern music major, on one hand.

On the other hand, we see Kyu Won, a traditional Korean instrument player who wants to become one of the best traditional musicians. These two people who are so different from each other come together and fall in love.

This series is a psychological thriller romantic series that is one of the best K-Dramas on Hulu. It focuses on the antihero, Moo-Young, who is often called a monster.

Even though he gets accused of eliminating a woman he gets the love of Yoo Jin Kang, a kind and sympathetic woman. But their relationship is not accepted by Yoo Jin Kang’s brother, a detective, who is keen on exposing Moo-Young.

This is another Korean drama that has an interesting storyline with likable characters. Seo Ri was only 17 when she got into an accident and slipped into a coma. Her dream to study in Germany ends there, and she wakes up after 13 years.

On the other hand, Woo Jin, due to bad experiences, refuses to be in a relationship with anyone and has stayed single for 13 years. They meet and, a relationship starts between them.

This K-Drama with a unique story is another must-watch on Hulu. Yeong Ho is a trainer who comes back from America when he gets in a scandal with an actress. He comes from a wealthy family, but he is still distraught over an injury that he got in his childhood.

He meets Joo Eun, who used to be a beautiful woman but over time becomes overweight. Because of this reason, her boyfriend dumps her, and she then takes the help of Yeong Ho to become thinner.

This business comedy-drama is available on Hulu for fans to watch. It tells the story of Sung Ryong, a skilled accountant who works for gangsters.

He enters a company intending to embezzle money from them. And here, he meets his coworkers, who are quite unusual but soon become friends with them.

But he starts to change when he witnesses how employees are enduring due to office politics, and, thus he decides to bring justice to them.

Boys over flowers is a Korean adaptation of the Japanese manga of the same name. The story is about Jan Di, an upbeat and courageous girl who has a strong sense of justice.

When she saves a boy from the prestigious Shinhwa high school, she gets the chance to be a scholarship student there. Here she meets F4, a group with wealthy students and strong influence over the school.

She gets on the wrong side of the leader, Jun Pyo, and makes him her enemy.

This is another heartwarming story of an ordinary woman and a book shop owner. Hae Won, who used to love playing cello, gets betrayed by others.

And, after being tired of her daily life in Seoul, she decides to move back to her hometown for a change. Here she meets Eun Seob, who runs the book shop Goodnight Bookstore.

With this young man beside her, she starts to change for the better and gets the life that she craved.

This is a unique K-Drama even has a successful Hollywood adaptation. The story follows Shi On, a brilliant doctor with autism.

Even though he lacks mental maturity and the ability to showcase emotions, he was able to graduate with distinction. But he is not alone in this, as along the way, he makes important friends who not only help him adapt to his circumstances but also support him through thick and thin.

Young Joon is the young and handsome vice president of one of the most successful companies. He is narcissistic to boot, and only a few people can handle his tantrums.

His secretary Mi So is the only employee who is compatible with him and hence he values her work very much. But after being tired of her gruesome and tiring job, she decides to quit her position and start her own family. This, however, did not sit well with Young Joon.

This fantasy romance drama is another great watch for fans on Hulu. It has an interesting story and beautiful cinematography.

Shim Chung is a mermaid who once loved a man called Kim Ryung in the Joseon Era. She again, falls in love with her lover’s doppelganger Joon Jae, in the modern world.

Joon Jae is a skilled scam artist who approached Shim Chung because he wanted her expensive jade bracelet. But, he too ends up falling in love with her and unravels more about their past connection.

This K-Drama deals with hope, love, and painful memories. Here we see two characters who find themselves as the survivors of a painful accident that still haunts them.

Gang Doo’s dream of becoming a football player gets crushed by that serious accident when he was 15. But he still tries his best to live his life properly, while being crushed with debts and responsibilities towards his sister.

On the other hand, Moon Soo also has nightmares from that accident but tries her best to survive in her own way.

Descendants of the Sun is one of the most famous Korean dramas that enjoyed worldwide fame when it first came out. The story follows Mo Yeon, an assertive doctor, and Shi Jin, a talented soldier.

They both are very unlike each other but still, they end up dating each other. But soon, problems arise in their relationship, as they fail to understand each other’s profession.

Ending their relationship was the only thing they could do, but they meet again, but now on a battlefield.

This romantic thriller drama is certainly one of the best K-Dramas of Hulu. The story follows three people, a field reporter, a prosecutor, and a police officer.

Hong Joo, the reporter, lives with her mother and runs a small restaurant. Ever since she was young, she had the ability to see the future, but, sadly, most of the time, she can not do anything about these premonitions.

Jae Chan, the prosecutor, one day saves the lives of Hong Joo and Woo Tak. After this incident, all three of them begin dreaming about each other’s future and realize that they are now connected through fate.

Hee Sung is a loving father and the best husband that a woman can ask for. He not only supports his busy wife, who is a detective but also showers her with immeasurable love.

But underneath this perfect facade, there lies someone who has lied about himself to the world all his life. He is not what he portrays, and thus, he desperately tries to hide his past from his family.

On that note, we conclude our list on the Top 15 Best K-Dramas on Hulu with Interesting Story. We hope we were able to make worthy recommendations that suit your taste. Stay tuned for more entertaining articles on your favorite topics.