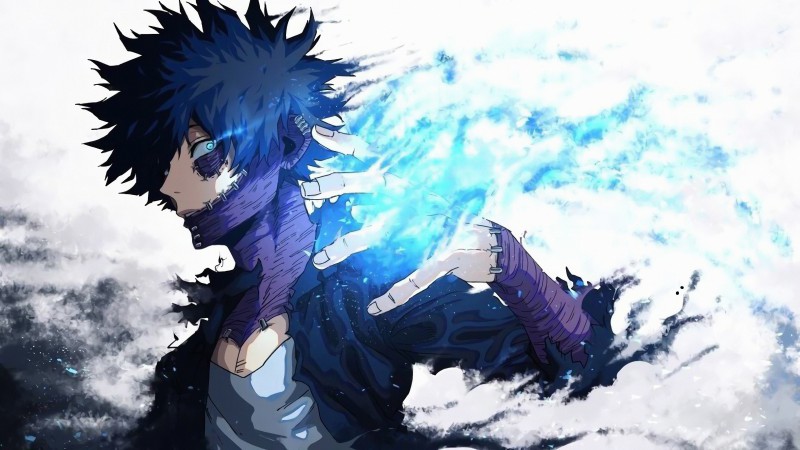 My Hero Academia is a Japanese superhero manga series written and illustrated by Kōhei Horikoshi and has taken the top spot on everyone’s top list. The story has engrossed and entertained us with each character, storyline, Quirks, and action. Besides these, bonding between the characters has also won many fans’ hearts.

The world of My Hero Academia is constantly terrorized by villains and it’s the heroes that engage and defeat them. From the beginning of the series, numerous villains had been introduced in different arcs but in this post, we are going to discuss Dabi and his Quirk along with his background and power level.

Dabi was first introduced in The Aftermath of Hero Killer: Stain and later in the Final Exams Arc, he was recruited by Giran to join the League of Villains. He is commonly known by the name Dabi or Blueflame and his real name is Toya Todoroki. During the Paranormal Liberation War Arc, it was finally revealed that he was the long-lost son of the Pro Hero, Endeavor, making him the eldest son of the Todoroki Family. It was shown that he holds a grudge against his father and a misunderstanding regarding his father made him join the path of a villain and create hatred toward his family.

Even though he was part of the League of Villains, he didn’t care much about the organization and its members and is using them to achieve his own goals. He follows Stain’s ideology and joined the League of Villains to make his ideas into reality. Previously, he led the Vanguard Action Squad to invade the Beast’s Forest and attack the U.A. High School students. Along with Geten, he is the current commander of the Vanguard Action Guerilla Warfare Regiment: Violet.

Quirk of Dabi (My Hero Academia) –

True to the name Bluflame, Dabi can generate highly destructive blue flames from his body and his ability Cremation can burn large groups of people to ashes. It is also powerful enough to set any forest ablaze. He is an expert in controlling his flames and can project them in a wide area at a reasonable distance from himself, and also in massive quantities. Besides this, he uses the flames to maneuver himself in the air which gives him a further advantage in battles.

This ability enables Dabi to raise his fire’s temperature to the highest level and also maximize his power which further augments his attack power. Besides augmenting his attack power it also increases his speed. This ability was Endeavor’s signature move which later got passed down to him.

This ability of Dabi allows him to shoot his desired opponent with a blast of fire and unlike his father, Endeavor, he shoots blasts of fire rather than making any direct contact with his opponents. During Paranormal Liberation Front Arc, he used this ability against his younger brother, Shoto Todoroki, which severely wounded him.

Prominence Burn is a super move that grants Dabi the ability to vaporize his opponent by using a concentrated beam of fire that is generated from his whole body. This ability was first seen when he nearly used it against Endeavor but was interrupted by Best Jeanist’s arrival.

Dabi is a keen individual who possesses good sense and is very perceptive of his surroundings. He can easily perceive someone’s intentions and weaknesses and use them against them. Moreover, he psychologically engages his opponents to weaken them morally and also buy time since it complements the vulnerability of his flames hurting his own body over time.

As he was trained from a young age by Endeavor and also going through self-training, he has proved himself to be a powerful villain and one of the strongest members of the League of Villains. Even though he is weak in terms of physical strength, his flame strikes are strong enough to burn anything in an instant and also nearly crushed Hawks while holding back his firepower. He also has immense speed and agility that he could keep with Tokoyami and Hawks’ movements after burning half of his wings. Despite his disheveled body and Quirk drawbacks, Dabi is fairly effective at enduring battles wherein heavy injures are eminent. Also withstood tackle from both Vlad King and Gran Torino proving his durability during battles.

His flames possess more firepower than his father Endeavor’s Hellfire Quirk and become more strong according to Dabi’s strong emotions. But his body gets burned from prolonged use of his Quirk as he inherited his mother’s resistance to freezing temperatures unlike his younger brother, Shoto. It is estimated that his flames are also stronger than Shoto as the latter suggested so saying Dabi’s flame is more powerful than either his or their father’s. Though there is a drawback in using his Quirk for a prolonged time which results in scars on his body.

The My Hero Academia has currently 4 seasons in total with 5th season releasing this month and a total of 304 chapters. The series can be read on VIZ Media or any paid platform. The story follows Izuku Midoriya’s adventure in becoming a Hero in a world full of superheroes despite him being Quirkless. We will be back with more posts like this, till then stay tuned with us.