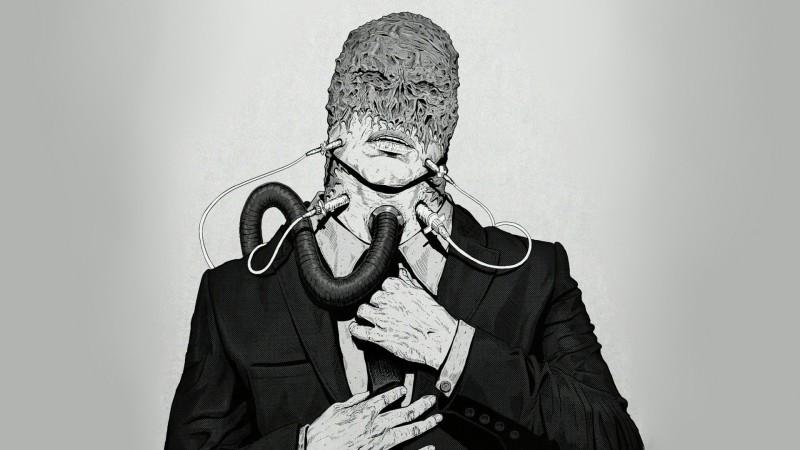 All For One, also known as Shigaraki, was the primary antagonist of the Hideout Raid Arc as well as the founder of the League of Villains with his disciple, Tomura Shigaraki, as his successor in the My Hero Academia series. His true motives were unclear while his true identity remains unknown.

He was the arch-nemesis of All Might and the most powerful villain in the series. He is intelligent yet self-absorbed, vengeful, ruthless, and despised All Might for taking away his power in the first battle between them. He was decisively defeated by All Might after he escaped from Tartarus.

He has a calm and collected demeanor and despite his power and authority, he respects his subordinates and associates. He helped people using his power but the action was done with ulterior motives and obliterated those who refused to provide their aid in return for his help.

Power of All For One in My Hero Academia-

He is the most powerful villain ever introduced in the series and has stolen multiple Quirks from innumerable amounts of people. Due to the Life Force Quirk he lived for more than 100 years and accumulated vast experience and power. As he had an assembly of Quirks he could switch between various powers amid battle which made him unpredictable.

All For One is his main Quirk and as its name suggests this Quirk allowed him to steal Quirks of others and granted him the ability to use them as his own. Most of all he could pass on his stolen Quirks to other people, mainly his subordinates, and during battles he combined the Quirks to create more powerful and composite attacks which resulted in devastating effects. Before his battle with All Might, he transferred All For One to Tomura Shigaraki while keeping the copied version.

Quirks of All For One in My Hero Academia-

Search Quirk allows him to observe and monitor 100 people at a time, including their location and weak points, making up for his blindness. He uses this Quirk as an infrared and stole it from Ragdoll.

All For One can use this Quirk on a large scale as it was seen when he transported dozens of Nomu to the League of Villains’ hideout. It is similar to Kurogiri’s Warp Gate, which produces a black liquid that acts as a portal. But this Quirk has a limit as it is not a coordinate-based warping and can only be used on people with whom he is close.

Another one of his stolen Quirks and allowed him to release shockwaves of air from his arm. This is further strengthened when combined with other power-up Quirks and Springlike Limbs Quirk.

All For One used this Quirk to enhance his physical strength and can launch away his opponent in close range. The Quirk was first seen in Chapter 90 and can be used to further augment his other Quirks namely Air Cannon.

This Quirk was also seen in Chapter 90 of the series and allowed All For One to transform his fingers into black tendrils that have red prominent cracked lines. These appendages can easily pierce anyone and are controlled by him. He also combines this Quirk with Forced Quirk Activation to activate the Quirk of other people who are at a certain distance.

He primarily uses this Quirk as a combination with Rivet Stab and is capable of activating Quirks of people against their will, conscious or not it will work, giving him an advantage over others. It was used on Kurogiri to activate his Warp Gate and Magne to activate her Magnetism.

This Quirk enables All For One to reflect the impact of an attack on its attacker but is unable to completely reverse the impact as was seen in the case when Gran Torino was still briefly incapacitated by All Might’s punch.

Allows him to sense his surroundings using infrared senses and also allows him to sense the emotional state of others but to an extent. This Quirk compensates for his blindness and the amount that he can sense is very limited.

All For One gained this Quirk from Doctor Garaki and even after his brother passed on One For All, he remains active and dangerous. This Quirk doubles the user’s lifespan at the cost of sacrificing physical mobility but he mastered this weakness through the use of multiple other Quirks.

Super Regeneration can regenerate any sort of injuries inflicted on All For One at incredible speeds. However, it does not work on cicatrized injuries and has its drawbacks as displayed by other users.

It is a combination of Springlike Limbs, four Kinetic Booster Quirks, three Strength Enhancer Quirks, Multiplier, Hypertrophy, Rivets, Air Walk, and Spearlike Bones Quirks which greatly enhances All For One’s right arm. He used this combination for the first time in Chapter 93 and also added Impact Recoil onto this combination to better his chances of killing All Might. But he was ultimately defeated in the end by All Might.

Former Quirks of All For One-

Read My Hero Academia series on the official Shueisha website or VIZ Media and watch the series on Crunchyroll or any paid platform. The series is written by Kohei Horikoshi and the story follows Izuku Midoriya’s journey in becoming a Hero in a world full of superheroes despite him being Quirkless.