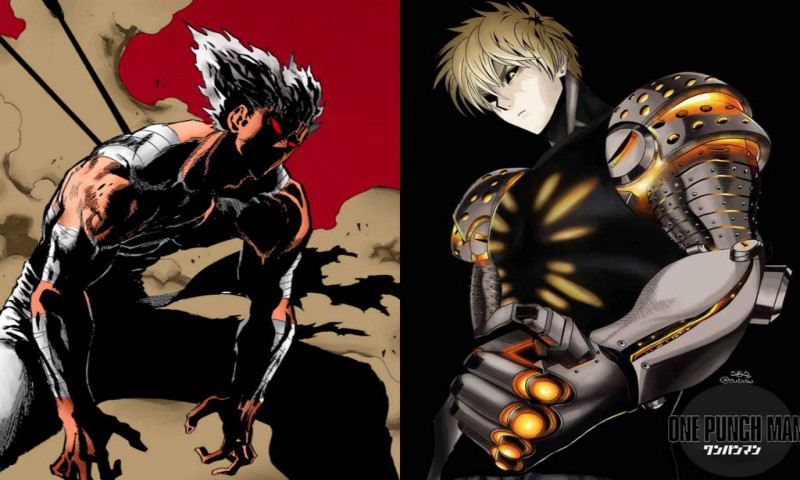 One-Punch Man is a Japanese superhero franchise illustrated by Yusuke Murata. Previously, it was a webcomic series created by ONE. The series has kept us entertained and anticipating more of it with its storyline, action, and unique characters. And in this post, we are going to analyze the strength, power, skills of two characters, i.e. between Garou and Genos.

Garou is one of the major antagonists in the series and an expert in martial arts. He challenges anyone for combat for which he has become an adversary to both the Hero Association and the Monster Association, he is also a self-proclaimed Hero Hunter due to his hatred towards the heroes. Even though Garou is a villain and considered evil by most, he possesses a sense of morality as he fights heroes in a way without eliminating them. He is a former disciple of Bang and wants to achieve world peace by uniting people to fight against him.

On the other hand, Genos is someone who fights for justice and is currently S-Class Rank 14. He is the deuteragonist of the One-Punch Man series and his cyborg nature has earned him the name Demon Cyborg under the Hero Association. He is also a self-proclaimed disciple of Saitama and trains under him to become stronger. Genos has a certain sense of pride in himself and his abilities as was seen in the battle against Awakened Cockroach but also accepts that there are beings stronger than him.

Garou has superhuman strength and could be compared to that of S-Class heroes. Moreover, previously he also heavily injured S-Class heroes like Tanktop Master and defeated a group of A and B-Class heroes even in a weakened state. Genos doesn’t also fall behind, his cyborg physiology grants him incredible strength which was seen during the combat between him and Deep Sea King where he easily sent the monster flying through a wall. After G4 upgrade his Virtual Genocide System’s (VGS) simulations estimated that he could easily beat the base form of Mosquito Girl in one attack and hydrated Deep Sea King with two attacks. So, it could be said that they are on equal terms based on strength.

Without a doubt, Genos possesses an immense amount of agility and speed as he was able to keep up with Speed-o’-Sound Sonic and Garou. But in terms of speed Garou takes the first place as even in his weakened state he easily kept up with S-Class hero Genos as well as outmaneuvered the group of A and B-Class heroes. His amazing speed was also seen when he effortlessly deflected Metal Bat’s attack and dodged a point-blank bullet from Golden Ball despite being caught by surprise.

Based on techniques, it can be said that both of them are on the same level. One of them is a skilled martial artist who adapts to combat and uses the advantage of the opponent’s weak spots to give himself the upper advantage in fights. Moreover, his Chō allows him to learn countermeasures for other people’s fighting styles while making their fighting styles his own.

Also, Garou is a master in using both Water Stream Rock Smashing Fist and Whirlwind Iron Cutting Fist skills. Whereas Genos’s Full-body Cyborg Enhancement enables him to use combat-ready cybernetics and prostheses. His palm is equipped with Incineration Cannons which allow him to fire large, powerful blasts of heat, fire, or plasma across significant distances, one blast is powerful enough to obliterate buildings. His detachable body parts also give him an advantage in battles.

Must Read: What is Threat Level in One Punch Man

Genos has a great amount of endurance as his cyborg body enables him to fight on without feeling any pain from his injuries and even can continue fighting with only a single arm. But Garou has an inhuman pain tolerance which puts him above Genos, as he didn’t flinch when Spring Mustachio’s sword stabbed through his hand and also stood his ground after a beat down from Tanktop Master.

Furthermore, after suffering from a fever he easily defeated multiple heroes and later again losing feeling in his arm against Bang, the most powerful martial artists, he was still able to persevere and create tremors in the ground.

In the series, Garou has won a total of 8 battles and is in lead. In his first battle, he disabled Magic Trick Man by simply holding his collar and knocked out Heavy Tank Loincloth with a punch after breaking his arm in multiple places. He defeated Blue Fire by ripping his arm off. He knocked out Tanktop Vegetarian and again defeated Red Nose, Studless, and Hyottoko by simply punching. Again, defeated Tanktop Master and Tank Topper Army using Water Stream Rock Smashing Fist. He won against Death Gatling’s Group by simply beating them up. Later, he obliterated Royal Ripper using Whirlwind Iron Cutting Fist and took out Puri-Puri Prisoner with multiple punches, although Garou was fighting sub-consciously.

Excluding group battles and several unnamed monsters, Genos won 4 battles while fighting alone. His first battle was against Armored Gorilla whom he defeated by hand-to-hand combat and incineration cannon. He used Incinerate to melt the internal structures of the G4 robot and defeated the true form by hand-to-hand combat. Genos vaporized Face Ripper’s body using an incineration blast. The battle between Genos and G5 was a short one where he effortlessly split the robot’s core with his Jet Drive Arrow skill.

Genos has received numerous upgrades throughout the series which further enhanced his strength and speed and enabled him to defeat many monsters. His upgraded skills easily enabled him to defeat G5 while skills like Spiral Incineration Cannon and Super Spiral Incineration Cannon severely injured Senior Centipede and Elder Centipede. But Garou is someone who constantly evolves through combat and after he awakens, i.e. transformed into a monster his strength, speed, durability, and endurance got further augmented. After his awakening, he stood his ground against the normal punches of Saitama and healed injuries instantaneously. Hence, Garou is in the lead in this.

Garou vs Genos Who will win?

Garou and Genos fought against each other in Chapter 83 of the series where Garou was heavily injured from previous battles. The outcome of the battle was indecisive as it was interrupted by Bang and his brother but it seemed both were on par with each other. Garou is a character who continuously gets more powerful throughout the series.

In his current state, he can easily defeat S-Class heroes except for Tatsumaki, Blast, and Saitama. Moreover, he can copy his opponents’ skills from a single fight and can heal injuries in a second. The same could be said about Genos as with each new upgrade he does get more powerful, but the speed at which he progresses in power and ability is dwarfed by Garou.

So, if they collide for the second time it may result in Genos being severely injured or losing his limbs once again. But once again it depends on what point in the progression of Garou we are referring to. It is true that Genos has also fully upgraded his body from new advanced technologies in which he has given a tough fight to Psykos.

But are technologies enough to take down Awakened Garou who easily defeated Superalloy Darkshine? Genos is equal to and can also emerge as a victor against human Garou, but against Awakened Garou, Genos can’t stand a chance.

Genos can’t overpower Garou as of now but has a chance in the future. Garou is also constantly evolving and remains to be seen if his current power is his limit. The One Punch Man series follows Saitama’s quest in searching powerful opponents to fight after growing bored from defeating opponents with a single punch. Read the series on VIZ Media or any paid platforms. We will be back with more posts like this, till then stay tuned with us.