Skip to contentHome » Anime & Manga » How Strong is Yamamoto in Bleach? Explained 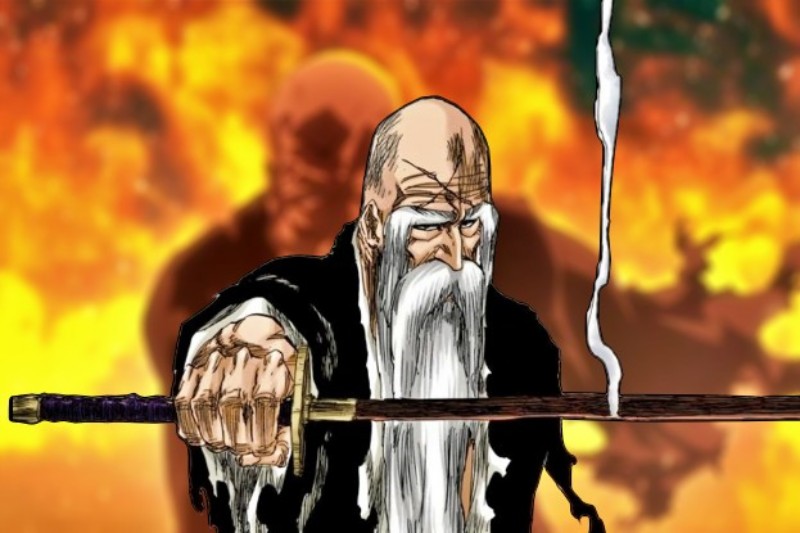 Genryusai Shigekuni Yamamoto, the founder and captain of the Gotei 13 captains as well as the strongest captain is a force to be reckoned with. He had already diffused Yhwach’s attacks in the past 1000 years ago and annihilated him.

The fact that Yamamoto is the strongest captain possessing a strong Shikai and a Bankai was already accepted by the other captains, and Aizen also avoided a head-on confrontation with the head captain.

Yamamoto, in his prime, is undoubtedly stronger than Yhwach, and now, he is a bit less strong than Yhwach, albeit still in the top 5 strongest characters of Bleach’s list. Even Yhwach, who awakened after 1000 years, avoided a confrontation, further proving how strong Yamamoto is.

Later in this post, we will look at how strong Yamamoto is in Bleach.

Who is Yamamoto in Bleach?

Yamamoto is the founder of the ruthless killing squad of captains, the famed Gotei 13 captains during that time. He is the strongest of them and is feared by enemies and allies alike.

He had been the captain-commander of the Gotei 13 for 1000 years, and there came no other Shinigami stronger than him. Yamamoto is also the captain of the 1st division of the Gotei 13 captains and reigns supreme over all of Soul Society and major decisions regarding the realm and safeguarding it from intruders.

All of the divisions look up to him with reverence and have complete confidence regarding Yamamoto’s decisions and plans.

He was also the Head instructor at Genji School and taught Jushiro Ukitake and Shunsui Kyoraku personally. Yamamoto was also personally involved in picking Sajin Komamura and Kenpachi Zaraki.

How Strong is Yamamoto in Bleach?

Yamamoto is undoubtedly the strongest Captain in the history of the Gotei 13 Captains, reigning supreme over all the other squads and protecting Soul Society from intruders.

He was so strong that even Aizen knew to avoid a confrontation with the Head Captain. Yamamoto also utterly defeated Yhwach’s invasion 1000 years ago and made Yhwach understand the feeling of despair.

He completely obliterated the Quincies present during the invasion and showed no mercy, slaughtering them all. Yamamoto has superior abilities in every aspect, be it Shunpo or mastery with the Sword or his strength and his battle tactics.

His Reiatsu alone is enough to send chills down many people’s spines, and he also boldly proclaimed that Aizen’s illusions and petty tricks would not work on him.

Yamamoto’s Zanpakuto Ryujin Jakka is the strongest fire type Zanpakuto, and no one else could come any close to its attack prowess.

Ryujin Jakka’s Shikai is that it covers the whole blade in a flame of fire, making it unbearable to anyone with low Reiatsu, and turns everything and anything to ash in its vicinity.

He is also able to trap his opponents with his Jokaku Enjo and Ennetsu Jigoku, which trap any opponents in a flame prison and a pillar of flames.

Unleashing his Shikai sends the signals of his immense and scorching Reiatsu pressure miles away from his location and was even powerful enough for Aizen not to come close to Yamamoto carelessly.

The vibrations from his Shikai alone send a message of fear to his opponents, making it one of the strongest Shikai in existence, which does not have any flaws even after being de-activated.

Zanka no Tachi, his Bankai state, has four different forms, each of them representing different directions with an increasing power level with each step.

Zanka no Tachi East, where he condenses all the flame produced by Shikai into his blade, which turns into a charred wooden sword that has amplified firepower and cuts through everything, not leaving a single trace.

West, where he drapes himself and his sword in a scorching temperature of 15 million degrees, which would make him and his sword untouchable and can be made invisible to fool opponents.

Zanka no Tachi north, a single strike that concentrates all 15 million degrees of his flame at the tip of his blade. The sword has so much increased slashing capability that it can even vaporize Blut Vene and turn anything to ash on being closer to the blade.

South, which summons a dead skeleton army, which will head to Yamamoto’s calls and is forged using Yamamoto’s ashes, so they automatically have increased durability.

Yamamoto ultimately fell prey to Yhwach after the latter awakened after 1000 years and decided to invade Soul Society with his Sternritter army.

Yhwach played dirty by sending a different sternritter who had copied Yhwach perfectly, Royd Lloyd. His power was that of Y, yourself, which lets him disguise himself as anyone, maintaining their original personality and memories.

When Yamamoto thought he was not showing any mercy to Yhwach, it was Royd Lloyd instead who took Yhwach’s place and tried to face off against the captain commander to buy time while Yhwach visited Aizen.

Yamamoto, unbeknownst to this, used up all of his Bankai power and abilities on the clone while the real Yhwach watched the battle from afar and sneakily sucked out Yamamoto’s Bankai, as he was the only one who could control such a powerful Bankai.

Absorbing the powerful flames, it became easy enough for Yhwach to kill the captain-commander in a swift blow. Yhwach further went ahead and mocked Yamamoto for not using his full strength and not healing himself, despite having the measures to do so.

His death was felt all across the Soul Society, and all the captains were instantly saddened at the demise of their strongest captain, as well as the Captain-Commander.

How Strong is Yamamoto Bankai?

Yamamoto’s Bankai is one of the strongest in the series, if not the most powerful Bankai the Soul Society has ever witnessed during all his time of being the Head Captain.

His Bankai was so strong that the pressure exerted from its release alone spread to the whole of Soul Society. Yamamoto himself stated that activating his Bankai for too long would destroy himself and Soul Society in the process.

Upon activation, it was capable of evaporating all clouds and water bodies surrounding Soul Society in an instant. A single cut from the tip of his blade would be fatal enough to kill his enemies and engulf them in a sea of fire, turning anyone or anything to ashes as soon as it comes in contact.

His Bankai is made up of both offensive and defensive capabilities, befitting that of a Captain Commander, and is an indestructible force that cannot be erased by anyone.

There is a reason why Yamamoto is strong and the strongest Shinigami Soul Society has ever witnessed, and all of his abilities and powers further elevate his appearance, which makes people look up to him as a great individual.