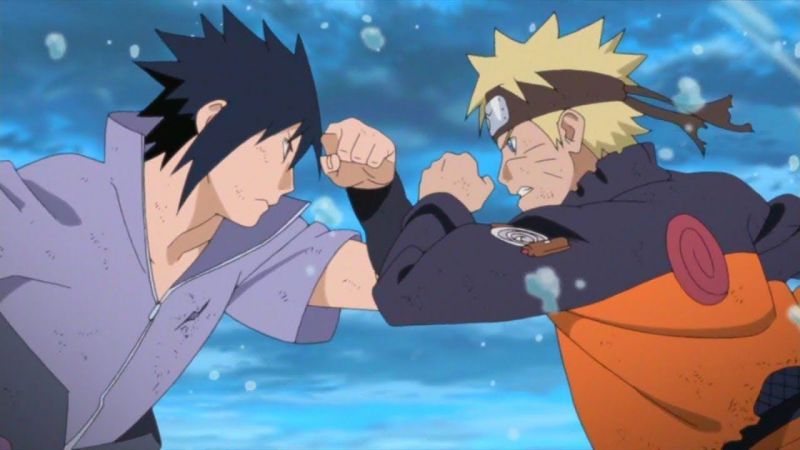 Naruto is a Japanese manga series created by Masashi Kishimoto. It tells the story of Naruto Uzumaki who aspires to be a Hokage. Boruto is the sequel to this series and tells the story about the next generation. Naruto and Sasuke are two of the most important characters in this series. In this article, we are going to compare their power and see who can emerge victorious in a one-on-one battle.

Naruto Uzumaki: Naruto is a shinobi of the Uzumaki clan of Konoha. He became the host of the Nine-Tailed Beast(Kurama) on his birth day which led to him being hated by most of Konoha. He played a major role in winning the Fourth Shinobi World War and was able to become the village’s Seventh Hokage.

Sasuke Uchiha: Sasuke belongs to the famous Uchiha clan of Konoha and is one of its last surviving members. He had been seeking revenge on his brother for years which led him to become an international criminal.He later learned the truth behind his brother’s sacrifice and played an instrumental role in the Fourth Shinobi World War. He was also forgiven by Naruto afterwards. He possesses Sharingan, a specialty of the Uchiha clan, and has the nickname of “Sasuke of the Sharingan“.

Naruto has massive reserves of strong chakra since he belongs to the Uzumaki clan and is also a reincarnation of Asura Ohtsutsuki. His chakra is at least four times greater than that of Kakashi’s and was described by Karin as “bright and warm”. His insane chakra reserve grants him extreme longevity, healing power, stamina, and vitality.

Sasuke also has quite a strong amount of chakra because he is the reincarnation of Indra Ohtsutsuki. His chakra grows even stronger, darker, and sinister whenever his Curse of Hatred deepens. It allowed him to summon creatures as large as Manda. Moreover, his chakra was so potent that Urashiki Ohtsutsuki openly commented on its strength mentioning that it was magnificent. Thus, Naruto holds a slight advantage over Sasuke in terms of Chakra.

Naruto is one of the strongest Shinobis in the series. His strength is unparalleled due to him being the host of the nine-tailed beast, Kurama. After training with Jiraiya he developed his strength even further and could defeat dozens of opponents without the need for shadow clones or enhancements.

Sasuke also doesn’t lag behind Naruto and one could argue he had greater physical prowess than Naruto from an early age. He is strong enough to hold his own in hand-to-hand combat against multiple opponents at once. He could combine his sheer strength with his speed which made it very difficult for his opponents to find time to perform even a single hand seal. Thus, Sasuke holds the upper hand on Naruto in terms of strength.

After Naruto gained access to the Six Paths Sage Mode it enhanced his speed to the maximum whereby he could dodge attacks at the speed of light. It also granted him the ability to fly at high speed and thus further increased his mobility. This made it incredibly difficult for his opponents to track him and gave him a major advantage in his battles.

On the other hand, Sasuke has possessed great speed ever since his childhood. His speed has been his most consistent physical display along with his reaction time. After re-awakening his Sharingan he further increased both of these attributes to complement his Sharingan. He has shown numerous times how he has been able to keep up with other fast techniques without even a sweat. Thus, Sasuke is much ahead of Naruto based on their respective speeds.

Naruto has previously defeated many powerful enemies, especially in the Fourth Shinobi War. He took on the Third Raikage that required a lot of his patience and he was ultimately able to defeat him using his Sage Mode and Rasengan. He even took on Uchiha Madara using Sage of Six Paths which was an incredible fight to watch. In the end, he was also able to defeat Kaguya and save the Shinobi world.

Sasuke doesn’t lack behind Naruto in this regard having defeated many powerful enemies himself. He engaged Kabuto with the help of his brother and was able to defeat him. He also battled against Madara while helping Naruto and demonstrated the power of his Susanoo. Thus, both of them are equal in this aspect and have gained valuable experiences in previous battles.

Naruto vs Sasuke: Who will win?

Naruto and Sasuke are two of the most skilled Shinobi in this series. They are the two sides of the same coin and both of them have helped each other grow. A one-on-one battle between them will make up for an epic clash that will end with Naruto emerging victorious. Although both of them are equal in most respects Naruto holds a slight edge over Sasuke.

In the case of Jutsus, Naruto is superior to Sasuke in terms of Taijutsu and Ninjutsu. Sasuke has the advantage only in Genjutsu. Moreover, they got the reincarnation of Asura and Indra, and Asura was stronger than Indra. When we consider their bloodlines, Hasirama was stronger than Madara. Thus, Naruto will be able to emerge victorious against his friendly rival Sasuke.

In addition to these, in the recent chapters, Naruto was able to use Baryon Mode, a unique transformation that was accessible to Kurama and its jinchuriki. It fuses Naruto’s and Kurama’s chakra to boost his abilities exceeding far greater than that of Sasuke. So, we can conclude that as of now Naruto can defeat Sasuke but as we have seen numerous times Sasuke is bound to come back stronger and may be able to defeat Naruto in the future. The manga series can be read in Mangaplus Shueisha or Viz Media and the anime can be watched in Crunchyroll.