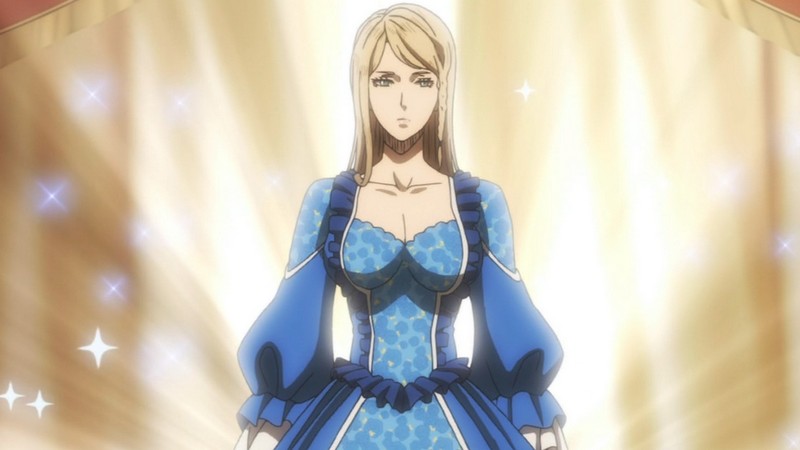 Black Clover has no scarcity of powerful female characters and Charlotte Roselei is one of them. She is a noblewoman of House Roselei and also the captain of the Clover Kingdom’s Blue Rose Squad of the Magic Knights. She also hosts the Elf Charla in her body. She has an affinity towards Briar Magic.

She is a tall woman with blonde hair that she usually keeps braided with most of it tied back into a bun. She has light blue eyes and pink lips. She usually wears a set of armor and appears as a quiet, cold, and indifferent woman. She is a stern woman who can keep her emotions well under control.

Charlotte possesses a three-leaf clover grimoire that contains various briar-based spells. She is able to summon a briar-like whip from her grimoire which she can use to attack her enemies, combined with her Briar Magic. She excels the most in Magic Power and Magic Control without lagging behind in Physical Strength either. Her weakest asset is Magic Sensing.

We got some instances of Charlotte’s power when she infiltrated the Spade Kingdom’s castle. Charlotte attacked two curse-enhanced Shining Generals with her briars. Vanica unimpressed with her captains’ magic attributes went on to attack Yami. This enraged Charlotte and she grew briars to cover the floor and walls, wrapping the two generals and weakening their curse. Charlotte then used True Briar Magic to knock aside the two generals and combine the red roses with her blue roses.

With this, the post has come to an end. Currently, the series has 27 volumes and the ongoing anime has 3 seasons. Read the officially released chapters on VIZ Media and watch the anime series on Crunchyroll. We will be back with more posts like this, till then stay tuned with us.