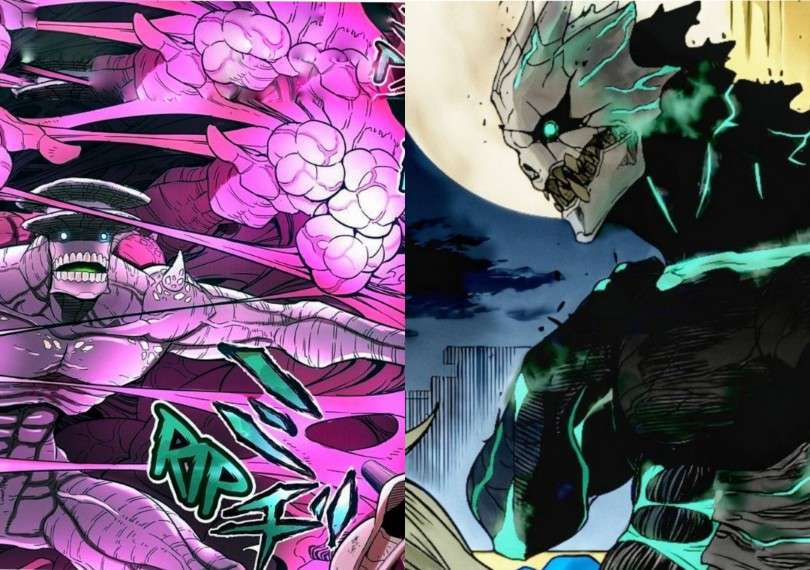 Kaiju No. 8 is a Japanese manga series written and illustrated by Naoya Matsumoto. It started serializing on Shonen Jump in July 2020. It has been prevalent and surpassed 30 million views last year. Kaiju No. 8 follows Kafka Hibino, who has a lifelong dream of joining the Defense Force who fights against the monsters. However, due to a sudden turn of events, a small talking monster flies into his body, and Kafka ends up turning into a Kaiju himself. He later gets known as “Kaiju No. 8” by the Defense Force.

Monster #9 is a humanoid monster. It was given the codename of monster #9 following the naming of Kaiju No. 8. Monster #9 first appeared as a human in chapter 14 of the manga. He is different from Kaiju No. 8 in the fact that he was a monster from the beginning. He resembles a human in just his appearance.

Monster #9 is the most powerful monster to appear in this series now. He is extremely durable and has great reflexes. He can modify various parts of his body and attack using them. He can recover quickly from the damages dealt with him. A wide array of attacks and abilities sets him out from the rest of the monsters. He also seems to be very intelligent and is always looking for ways to outsmart the Defense Force, as he saw how he attacked them with an After-Beast variant monster that splits and generates more.

Monster #9 first arrived in the series during the examination. It instantly gave us a taste of its power by attacking Kikoru Shinomiya out of nowhere. In spite of Shinomiya being a talented fighter herself, she couldn’t react quickly to it, and the monster shot straight through her. Monster #9 also started reviving the other dead monsters in the exercise ground and left eventually.

Monster #9 turned into his human form and joined as a monster sweeper to infiltrate the defense force. He revived a monster with an after beast variant and attacked them. However, with Kafka’s help, the defense forces managed to take out the after beast variant. Iharu then confronted Monster #9, but since he was in his human form, Iharu couldn’t identify him. He got shot by the monster without being able to react quickly.

Leno came to Iharu’s rescue and tried to communicate with Platoon Leader Ikaruga. Monster #9 was one step ahead of them and said that he had altered the space in that area to make it undetectable from the outside. Leno and Iharu together tried to hold off the monster but Monster #9 easily overpowered them. He used his high resilience and durability to deflect any attacks fired towards him. Even, he countered the electric bullet by making a shield of dead corpses, which forced Leno and Iharu to run out of ideas.

Kafka eventually turned into Kaiju No. 8 and confronted Monster #9. He modified his body and fired numerous bullets towards Kafka at the same time. Kafka managed to defend against them, successfully enraging Monster #9. Kafka managed to push him back with his wall of corpses. Monster #9 was unable to keep up with him and noticed that his recovery rate was slower than usual. Kafka figured out that his core was in his torso instead of his neck. Kafka launched a direct attack at his core and almost defeated him when he suddenly got interrupted by Platoon Team Delta. Monster #9 used this opportunity to escape and promised Kafka that they will meet again.

Monster #9 is slowly becoming the main antagonist of this series. Other than Kaiju No. 8, no one was able to keep up with him. We can speculate that Monster #9 will grow further in his power as the story progresses. Every story needs a good villain, and Monster #9 has not disappointed us till now in that regard.

Where to Read Kaiju No. 8 Series-

Kaiju No. 8 is officially available on Viz Media and Mangaplus Shueisha. Fans can advance on the official website or install the Mangaplus app from the play store to get free access to the series. We will be back with another article. Till then, stay tuned with us.

Power of Kafka Hibino’s Kaiju Form in Kaiju No. 8 / Monster #8