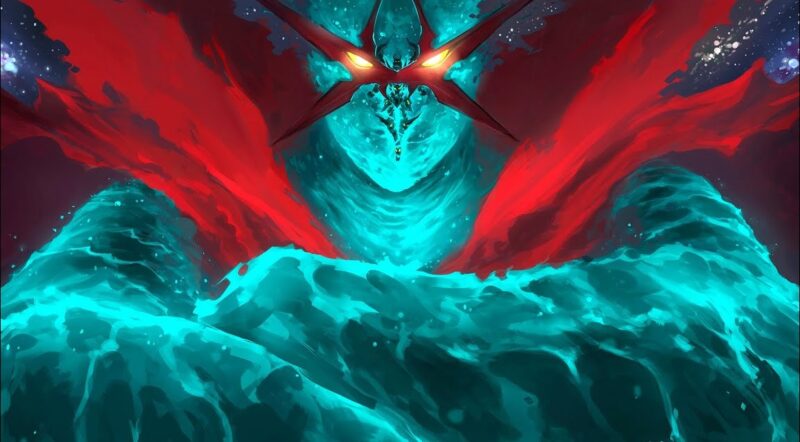 Planets? Galaxies? Universe? or even Multiverse? Is there any peck of reality in all planes of the space-time continuum that has not yet been breached by the stupendously powerful characters of the Anime universe? No, there are none. The anime and manga series released to date have introduced a plethora of unimaginable power levels to us by their ever-increasing over-powered characters.

Here we are listing out the top 10 most powerful characters from all anime and manga out there but only one from each title. That means only the top strongest entity, who can nullify every other character in the series, is mentioned. So are you ready for the ultimate list generated from the mass of comments and discussions by the fellow otakus? Read further for the whole list of characters with their series title.

The character of Haruhi is set at a highly debatable and fragile spot, as she holds infinitesimally spanning power and abilities but unknown to herself. We learn in the story that she has the power to create and destroy reality, worlds, time, and space but doesn’t realize it herself, thus happens subconsciously. Her mere want can create parallel timelines, the existence of aliens or espers, and speculation states that her will created this word as we see it. Most peculiar of all, she can create closed realities to regenerate the world again.

Kiss-shot (Shinobu), as we know her, is the strongest oddity in the Monogatari series, thus being the most powerful ever. Living for centuries, she has been deemed as the god, devil, monster, and the apex predator of the whole world. She has the power to create and diminish life itself. In an alternate reality, she even deformed the world after she killed every living creature and destroyed the moon. She even fended away from the apparition checker, on top of her immortality, giving her the power to even paradox the basic laws of apparitions.

Talking about apparitions that come to life from people’s fear and beliefs. Chainsaw man in a similar series that harbors the ultimate nullification of the immortal devils themselves. The Chainsaw Devil, the first and the last, the one who dictates the very existence of all other apparitions and devils. With extreme strength and omniscient abilities, he can render useless even the mighty devils who can alter reality and space itself. He can obscurely reject a fear by just eating the respective devil. No doubt he is the god of oddities and apparitions.

Mujin Park is the most powerful human in the history of God of Highschool. With power bestowed by the primal god Tathagatha himself, Mujin became the Maitreya. Consequentially he gained the ability to uptake any other power before his eyes, no matter how unfathomable. Even the gods of the sage, heaven, and divine realm couldn’t stand a chance against him. Most peculiar of all, with his own consciousness, he even suppressed the primal god who gave him this power in the first place. Planetary and galaxy level destruction is just for naught to him.

Isshiki Otsutsuki is the partner of Kaguya Otsutsuki, the prime antagonist in the Naruto series. Naruto Shippuden ended with the heroes defeating Kaguya, but it was later revealed that Kaguya was a lower-ranked Oktsutsuki fated to be sacrificed to the ten-tails, although she betrayed Isshiki, thus the Naruto story. Isshiki is the upper subordinate of her, possessing immense chakra and physical abilities, higher than any Boruto character. As the leader of the Kara Organization, he has complete sovereignty over every chakra’s abilities at a universal level.

Shigeo, or Mob as we know him, is the most powerful esper in the whole anime universe. From simple Telekenisis to otherworldly astral projections, he has complete control over all oddities, spirits, anomalies, calamities, and physics laws. At 100% output of power, he easily demolished cities and deformed earth, all while preventing casualties too. His superb control and convenient abilities rake him this high rank on the list. His occasional “???%” power level once created friction between the dimensions endangering the existence of the universe itself.

Only one thing can counter the immeasurable esper powers, physical strength, and space fabric alteration, i.e., “illogical manifestation of imaginary circumstances.” Nanika is a sister of Killua, introduced late in the story as it was revealed that she holds power to create and destroy circumstances themselves. No mass of energy, a force of Nen, or magic can propagate without her will. She has all the abilities as Haruhi Suzumiya, just that Nanika is actually conscious of her powers. The real extent of her powers rests with her imagination itself.

ZeedMillenniummon is an Evil God Digimon. Flying freely between space and time, it is a king of evil that is still trying to destroy all eras and worlds. He wields an invulnerable arsenal of space and time alteration attacks, giving him total control over any dimension he steps foot in. As for the bands which wrap around him, it is said that they are like chains that suppress its abilities, but it is unknown who could cast such a spell on him. However, it is foretold that if it is released from this spell, it will rain unfathomable destruction upon the Digital World itself.

Grand Zeno, the Omni-King, is the supreme ruler of all the Multiverse and, seemingly, its most powerful being in the Dragon Ball series. Zeno has the ability to erase multiple universes from the plane of existence in all paths of time. On top of that, he retains after destroying his current dimension by just moving into the future. He easily erased and reinstated 11 other universes in the blink of an eye demonstrating ultimate sovereignty over every other creature in the multiverse. Although he never fought, he is stated to be undefeated nevertheless.

By combining his own Spiral Power with his comrades, Simon created the true titular entity, which he titles, Tengen Toppa Gurren Lagann, in the final battle against the Anti-Spirals. Not actually a mecha by traditional means, the Tengen Toppa Gurren Lagann is actually a mass of continuously materialized Spiral Power on the scale of a Super Spiral galaxy. After absorbing the Multiverse Labyrinth, it could attack at the level of a Super Nova’s Big Bang. Over reality wrapping, it can also create mass from nothing and manipulate time and reality itself.

These are the most powerful and influential characters in the anime universe to date. Be them on the side of good or evil; these are the unbeatables from their respective anime series. Subscribe to our website for more updates on power charts and lists like these. We will be back soon with more recommendations and similar titles to the most popular anime and manga out there. Until then, stay tuned, stay hyped.