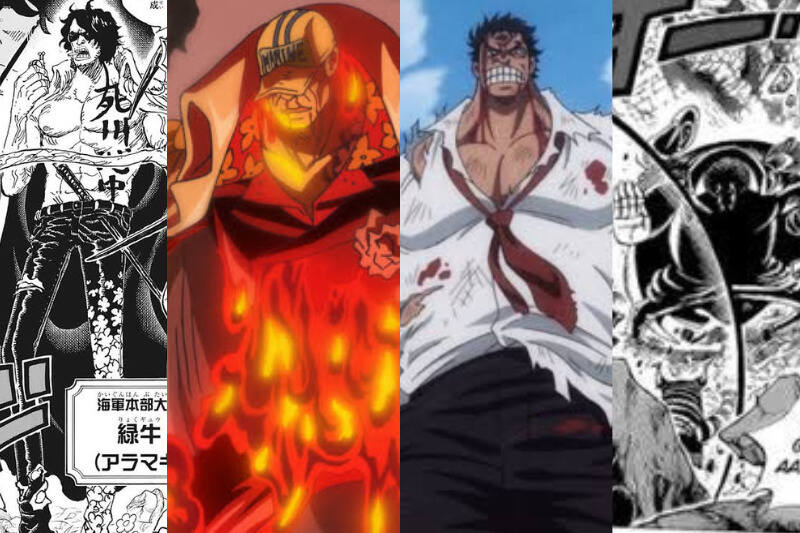 Oda has finally taken One Piece to the final phase. Fans are excited for the hiatus to end. Although Luffy and our Straw Hats have received major power-ups in the Wano Arc, there are still many strong foes in the World Government that they must face. The strongest of those foes may be the admirals. Therefore in this post, we have discussed and ranked All Strongest Admirals in One Piece. So, let’s begin. 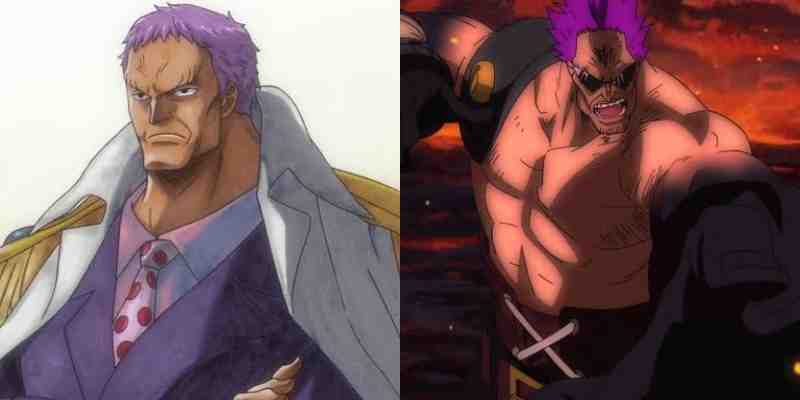 Black Arm Zephyr was one of the strong marines of the Old era. His strength is compared to Tsuru, Sengoku, and Garp. He was an Admiral in the World Government. Zephyr is trained in hand-to-hand combat and was able to take on Sanji, Luffy, and Zoro simultaneously.

Z has mastered Haki. He had a gun that shot Seastone bullets, making it lethal for Devil Fruit users. He also knew and worked with Monkey D. Garp and was powerful enough to spar with him when Z was in his prime.

Zephyr is also the founder of Neo Marines, which was a group of powerful ex-marines. They wanted total annihilation of the pirates. Zephyr’s power and leadership put him in seventh place on our list of the Strongest Admirals in One Piece. 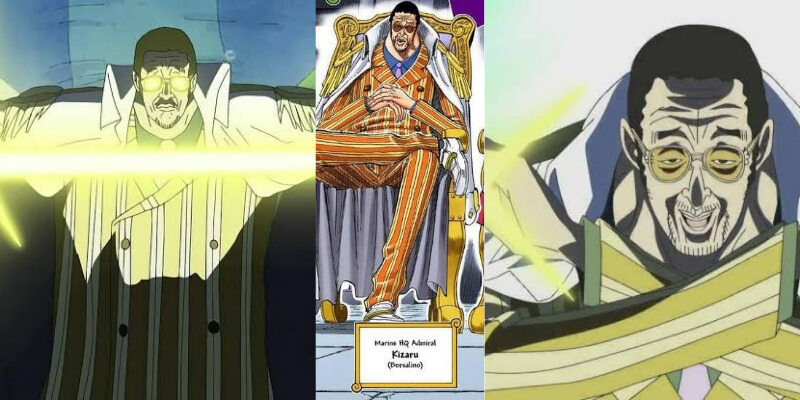 Kizaru ate the Pika Pika no mi, making him one of the strongest combatants in the World Government. He took out most of the Supernovas during the Sabaody Archipelago Arc, leaving them with fatal bruises.

Kizaru is so powerful was able to cause severe damage to Whitebeard during the Summit War. Borsalino is an excellent swordsman and can create a considerable broadsword using his devil fruit. Kizaru’s main move is to kick someone at the speed of light.

He also knows Haki and uses both Haki and his devil fruit to his advantage during battles with creativity. Kizaru can travel at the speed of light, making him the fastest and most agile character in One Piece. Borsalino’s Powers make him a massive threat to all pirates and in sixth place on our list of the Strongest Admirals in One Piece. 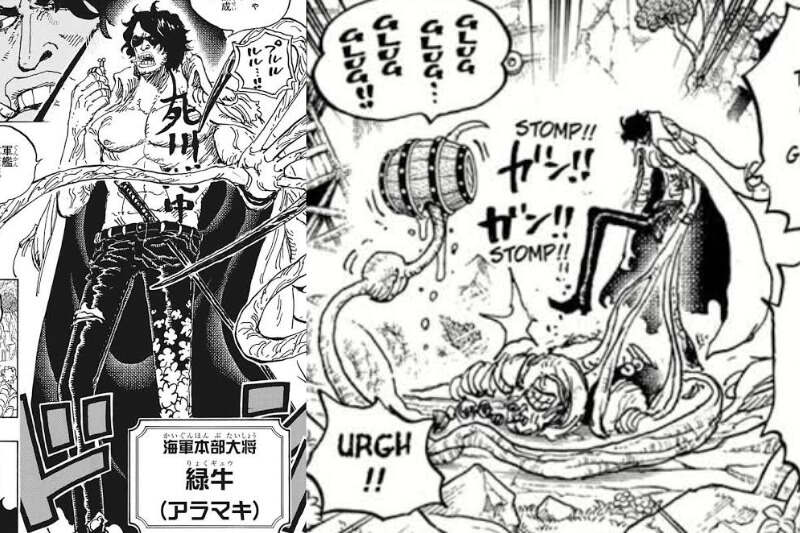 Ryukogyu Aramaki( Green Bull) became an Admiral in just two years of the time skip. Although his Devil fruit has not been disclosed, Oda showed us a glimpse of his power in the recent chapters. He created multiple plants from his body, enabling him to soak up all the nutrients from the Beast pirates. 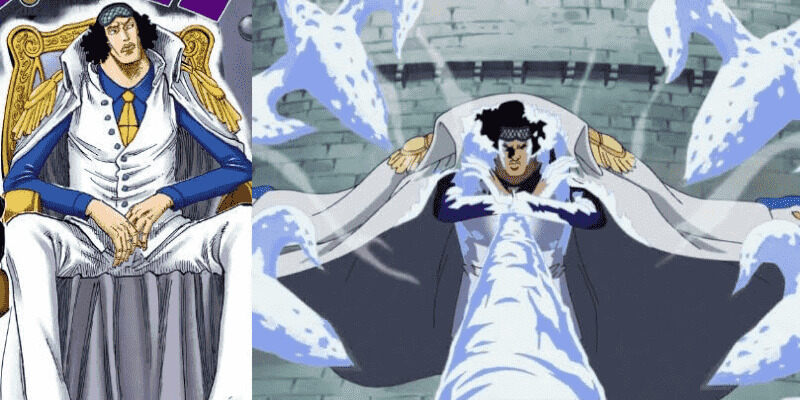 Although Aokiji ate the Hei Hei no mi and was one of the strongest admirals in One Piece. He can freeze his enemies whole before they even have a chance to react. He can use his devil fruit in unorthodox ways and freeze an entire patch of sea between islands, making it sturdy enough to handle a whole platoon for four days.

Aokiji played a significant role in the Paramount War, causing major damage to Whitebeard’s fleet. Kuzan can use Haki efficiently and can make weapons from his body. He has a sharp hearing to be able to locate underwater movement from a significant distance.

Kuzan’s devil fruit is so powerful that an intense ten-day fight with Akainu was able to change the entire climate of an island. The fight transformed half punk hazard into an icy, blizzard-filled chilly weather. Aokiji, with his talents and brains, puts him in fourth place on our list of the strongest admirals in One Piece. 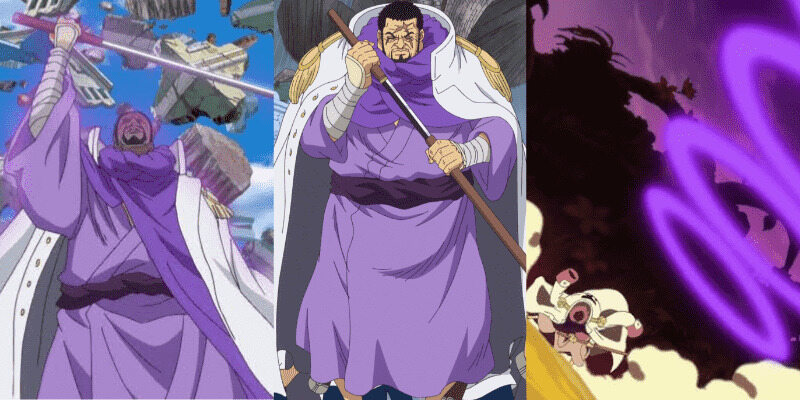 Fujitora ate the Zushi Zushi no mi and can control the natural and artificial gravitational forces. Issho blinded himself, but that did not affect his strength in the least bit. He is an excellent swordsman and uses his devil fruit and swordsmanship in a complimenting style. His devil fruit allows him to force or remove gravity from objects/people.

Fujitora can subdue his opponent by imposing enormous gravity on the opponent and can even affect the gravity of entire islands. Fujitora can negate the gravity of anything, making it float in the air. He can use Haki very efficiently. It allows him to see the world in his mind’s eye.

The showstopper of his ability is being able to use gravity to pull objects from space itself ( He has used this ability to summon giant meteorites to attack his foes multiple times).

Even though it is a Paramecia type, Issho’s exponentially unorthodox and extraordinary way of using it puts him in the third place on our list of strongest admirals in One Piece. 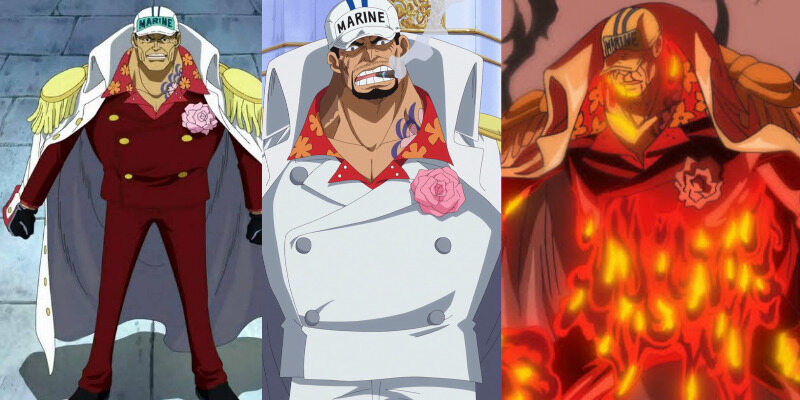 Akainu Sakazuki is the Fleet admiral of the marines. Sakazuki ate the Magu Magu no mi, transforming him into a magma human. Akainu is a firm believer in absolute justice and has the most powerful offensive combat-oriented devil fruit, which allows him to throw a barrage of magma punches, kicks, etc.

He can use his fruit to create dangerous magma fists, which can burn and cause significant damage to people and the land. Akainu’s strength is so vast that he was able to go toe to toe with the World’s Strongest Man; Whitebeard even damaged him severely enough to not recover from it; that is a feat on its own.

Akainu’s devil fruit is so powerful that an intense ten-day fight with Kuzan was able to change the entire climate of an island. The fight transformed half punk hazard into hot, lava-filled burning weather. Sakazuki, with his offensive power and leadership, puts him in fourth place on our list of the strongest admirals in One Piece. 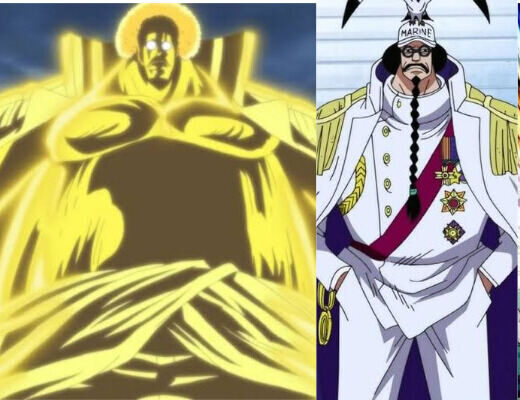 Sengoku the Buddha ate the mythical Zoan fruit Hito Hito no mi Model: Daibatsu, which allowed him to transform into a giant golden Buddha at will. He gets superhuman speed, strength, agility, and raw power in this form due to his fruit. He created shock waves which are enough to send Teach ( Blackbeard ) and his entire crew flying away.

Sengoku’s shockwaves are strong enough to compete with Whitebeard’s shockwaves and can do a lot of damage to humans and their surroundings hit with it. Sengoku can use all three forms of Haki. Roger even admitted that he could only be captured by the likes of Garp or Sengoku, which just goes to show how powerful he truly is.

Sengoku is not only powerful but also very experienced, has a keen intellect, and has superb leadership skills. Thus, making him the strongest admiral in One Piece and First place in our list of the Strongest Admirals in One Piece.

Kong was the fleet admiral of Garp and Sengoku’s generation. He is very influential in the One Piece world, as he had absolute control over the marines as well as the Cipher pols and Seven warlords of the sea. Kong could also give out orders for a buster call, and although his combat abilities weren’t revealed, his scars are to show for his experience.

Although Garp is not an admiral, he is one of the strongest characters in One Piece. Using just Haki, he was able to go toe-to-toe with the Prime Whitebeard and Prime Pirate King. Garp can use all three forms of Haki, and Roger even admitted that he could only be captured by the likes of Garp or Sengoku, which makes him a force to be reckoned with.