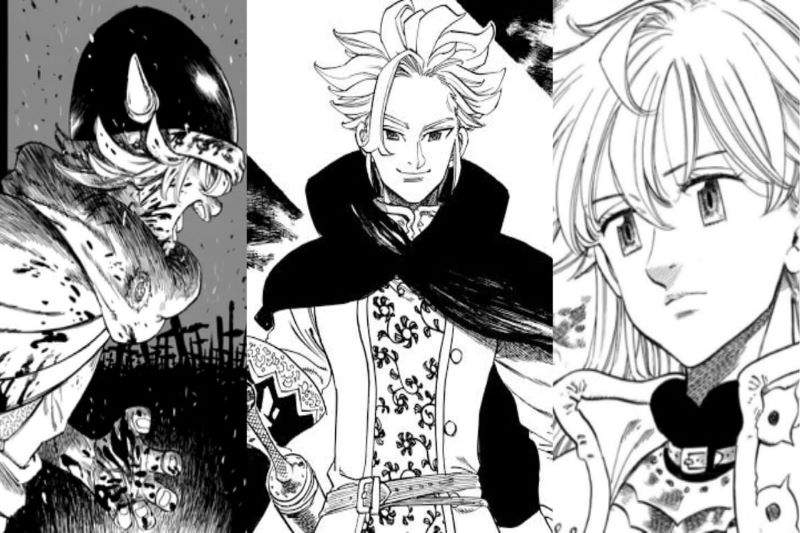 Its characters were incredibly strong and possessed enormous amounts of physical strength and magical power. As a result, fans were eager to know about the 10 strongest characters in Four Knights of the Apocalypse. So let’s get straight to this fantastic list.

Strongest Characters in Four Knights of the Apocalypse

Ironside is a highly skilled assassin and the father of Percival, the series’ main character. He is the primary villain of the Percival arc, wanting to kill his own father and son. In his fight against two powerful characters, he shows his potential by handling them on his own.

Due to this fight, Ironside deserves to be included in this list of strong characters. He wields a powerful sword and possesses excellent swordsmanship skills along with magical power.

Fiddich is the Dark Talisman’s leader, and Arthur assigns him to kill the Knights of Apocalypse. He is a merciless holy knight and is highly determined to accomplish his orders.

Fiddich demonstrates his full extent of power by putting up a fight against Lancelot. After using a haste spell, his speed and reflexes went to another level, but he was unfortunately killed by him.

Melascula is the Commandment of Faith, and after getting the power of chaos from Arthur, she became Chaos Melascula. She is a beautiful girl with purple hair who possesses incredible demonic powers.

Melascula is also able to transform into a long snake and kill anyone with her deadliest poison. While fighting tough opponents, she first covers them in a sphere of darkness and finishes them off.

Chaos Galand is reincarnated by Arthur Pendragon in the Four Knights of the Apocalypse series. He is one of the strongest demons who enjoys fighting powerful opponents.

Galand possesses an immense amount of demonic power that grants him incredible strength and magical power. His unique technique, “Critical Over,” is the sole reason he ranks so high on this list.

While using “Critical Over,” he increased his physical strength to the greatest extent until his entire magical power was exhausted.

Melagaland is the first fusion character in the Four Knights of the Apocalypse. He is the fusion of two powerful members of the Ten Commandments, such as Melascula and Galand.

After attaining the fusion form, his only goal is to follow the king’s order, i.e., to kill all four knights of Apocalypse. During the Chaos in Liones Arc, Melagaland easily overpowered the three knights of Apocalypse, including Percieval, Tristan, and Gawain, through his overwhelming power.

His most powerful ability is to create a toxic fluid that blocks the opponent’s sense of direction and accuracy. However, he is not able to withstand Tristan’s demonic powers and is eventually killed by his swords.

Gawain is one of the Four Knights of the Apocalypse and is regarded as the Knight of Famine. She is a young, beautiful girl with short hair. She is the niece of Arthur Pendragon, the series’ main antagonist.

Gawain is a very undisciplined and prideful girl. She believes herself to be the strongest person until she meets the other three knights. Her power is similar to Escanor’s, one of the strongest characters in the Seven Deadly Sins.

She possessed an incredible, strong magical power known as “Sunshine” that allowed her to enhance her physical appearance and strength to the highest extent.

Lancelot is the Knight of War and the son of Ban and Elaine. He first appeared as a fox named Sin but was later revealed as one of the knights of the Apocalypse.

He has two personalities: one in which he acts like a happy boy, and the other in which he transforms into a ruthless warrior like his father.

Lancelot has superhuman speed and strength that allow him to defeat any powerful opponent. Aside from his incredible strength, he possesses a supernatural power that allows him to read anyone’s mind.

In his fight against Arthur Pendragon, he proves why he is considered the strongest knight in the series.

Tristan is the Knight of Pestilence and the son of Meliodas and Elizabeth Liones. He is a young teenager with the same facial features as Meliodas. His great sense of justice and helpful nature make him so popular among fans.

Tristan is regarded as one of the strongest characters in Four Knights of the Apocalypse due to possessing both godly and demonic powers. His goddess power, such as Ark, that dispels all types of darkness through light particles, comes from Elizabeth’s side.

On the other hand, his demonic power, such as the demonic mode that he used to defeat Melagaland, comes from Meliodas’ side.

Percival is the main character of the series and the strongest Knight of the the Apocalypse. As being raised in an isolated environment, he is a very pure hearted young boy who always helps weak people.

Percival is the knight of death and possesses superhuman strength, agility, speed, and durability. Furthermore, his magical abilities and healing abilities greatly assist him in combating formidable opponents such as Melagaland and Arthur Pendragon.

He wields two powerful swords known as Ouroboros and Dragon Handle throughout the series.

Arthur Pendragon is the ruler of Camelot as well as the King of Chaos. As the main villain of the series, he is recognised as one of the strongest characters in Four Knights of the Apocalypse.

Arthur held a deep hatred toward demons, gods, giants, and fairies and wanted to destroy them in order to create a peaceful world for humans. He is already quite powerful in the Seven Deadly Sins series, but after becoming the King of Chaos, he became far stronger.

In his fight against Lancelot, he shows a glimpse of his chaotic power by overpowering him. Even though his full extent of power is yet to be shown, he still deserves to rank first on this list.

We’ll wrap up this article by talking about the 10 strongest characters in Four Knights of the Apocalypse. We compiled this incredible list based on their incredible powers and powerful moves.