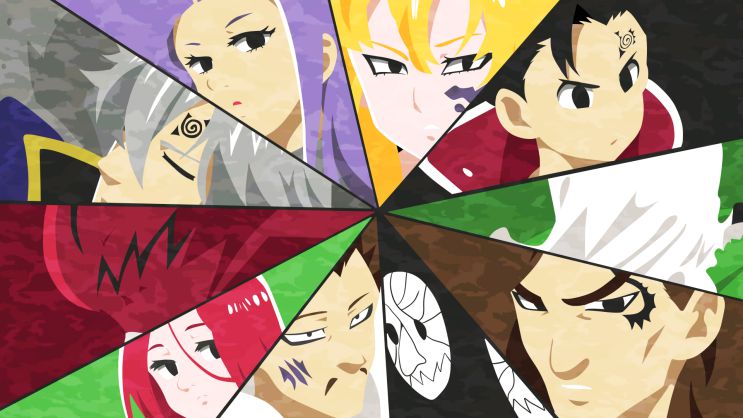 Fraudrin is the Selflessness of the Ten Commandments and one of the demons who wanted to resurrect his clan. His manipulative nature is one of his best assets as he can rile people against each other, which works in his best interest.

He has a variety of abilities, including Full Size, Soshin no Jutsu and Self-Destruct. Moreover, after taking possession of someone’s body by using Soshin no Jutsu, he can also use their special ability easily.

Grayroad is a member of the Demon Clan who is affiliated with the Ten Commandments as Pacifism. Her cruelty knew no bounds, and she didn’t flinch at acting them out. Although she is the youngest among the Ten Commandments, she is very intelligent and knowledgeable.

Her main ability is Curse which allows her to spread any kind of disease among her enemies. This is highly advantageous to her since she doesn’t need to resort to direct contact with them. She also has the power to shapeshift and take the form of anyone perfectly.

He harbours a deep hatred against the Goddesses and has great fighting capabilities while being equipped with a variety of weapons in each of his six arms.

His main ability is Evil Breath, with which he can hurl fireballs towards his enemies. All of these make Calmadios a powerful foe and places him in the thirteenth position.

Galand is one of the strongest warriors in Demon Clan and acting as the Truth of the Ten Commandments. He has a sadistic nature and usually goes on the offensive whenever he goes to battle.

Moreover his special ability Critical Over gives him an insane boost to all of his stats and increases his power level significantly. This is why Galand ranks higher than Calmadios due to his sheer offensive prowess.

Zeno was another one of the former Ten Commandments members who used to serve as the Patience. His special feature was the ability to levitate, making him stand out among the rest.

His Commandment allowed him to inflict double the damage on anyone unable to tolerate their pain in his presence. This made him a powerful demon and placed him in the eleventh position on this list.

Similar to Zeno, Aranak was also a former member of the Ten Commandments serving as the Repose. His commandment was special due to the fact that it had the ability to seal away anyone’s magic which would make his enemies powerless.

He was a calm and composed Demon who was almost equal to Zeno in terms of power, but his Commandment places him ahead of Zeno.

Melascula belongs to the Snake Race who serves as the Faith of the Ten Commandments in the Demon Clan. She doesn’t lose her nerve often in battles, and her special ability is Hell Gate which allows her to create various portals.

Her other abilities include Onhangon no Hou, Antan no Mayu, Shouraikon and Deadly Poison. Thus, although the base power level of Melascula is quite low, she has a variety of techniques at her disposal to overpower her opponents.

Although Gloxina is the first Fairy King, he joined the Demon Clan to serve as the Repose of the Ten Commandments in Seven Deadly Sins. Gloxina is a fairly powerful fighter owing to affiliations with both the Fairy Clan and the Demon Clan.

His main ability is Disaster, similar to King, with which he has complete control over life and death in nature. He fights using the Spirit Spear Basquias, which further highlights his strength and justifies his eighth position on this list.

It isn’t very surprising to see the Patience of the Demon Clan so high up in this list. Similar to Gloxina, Drole was affiliated to another clan previously before joining the Demon Clan.

His ability Ground gives him complete control over the earth, which even surpasses Matrona. By performing Drole’s Dance, he can further enhance the power of this ability which makes him an insanely powerful character to fight against.

Finally, the most notorious member of the 10 Commandments in Seven Deadly Sins makes her appearance. She is the commandment of Purity and usually has a laid-back personality, but she is a beast in battles.

Her special attack Combo Star is a mighty offensive blow that can rip apart any enemy with its continuous, uninterrupted attacks.

Moreover, by transforming into her Indura form, she can further increase her power level, which gives her a high place on this list.

Monspeet served as Reticence in the Seven Deadly Sins Ten Commandments and was one of its most powerful members. He specializes in his attack Trick Star allowing him to change places of any two objects.

If that isn’t enough, he can use Hellblaze, whereby he can attack his enemies using black flames. Also, similar to Derieri, he can use his Indura Transformation to gain a massive surge in power level.

One of the most powerful members in the latest Seven Deadly Sins Ten Commandments is Estarossa.

He was originally the commandment of Love but later also absorbed Purity, Truth and Reticence, making him insanely powerful.

The fact that he was able to make use of multiple commandments effectively establishes his massive power.

Ominous Nebula is his special power that can rip apart any enemy coming in contact with it. He can also use Hellblaze like Monspeet that has the power to stop the regeneration of even an immortal being.

Gowther is a former member of the Ten Commandments who used to be the Selflessness. He disobeyed the Demon king by refusing to fight and as a result, got imprisoned by him.

He may not have the flashiest attacks but his ability Invasion is a highly powerful move which is why he takes second place on this list. By using Invasion Gowther can trap people in their own memories while simultaneously being able to read them.

It is only natural that the son of the Demon King takes the first position on this list. Before Zeldris, he used to lead the Ten Commandments as Love. Along with Demon Sword Lostvayne and Full Counter, he seemed almost undefeatable.

Full Counter allows Meliodas to repel any attack directed towards him with double the damage. Moreover, his commandment Love made anyone who possessed hatred towards him powerless and gave him a great advantage.

The Ten Commandments are by far a few of the most powerful characters in Seven Deadly Sins. The commandment bestowed upon them by the Demon King also helped them to increase their base power level.

Fans can watch Nanatsu no Taizai officially on Netflix. We will come back soon with another Seven Deadly Sins article. Till then, stay tuned with us.

Q1- What are the Ten Commandments in Seven Deadly Sins?

Ans- The Ten Commandments are 10 of the most powerful warriors under the Demon King.

Q2- What are the Ten Commandments in Order?

Q3- What is Meliodas’ Commandment?

Q4- Are the Commandments good in Seven Deadly Sins?

Ans- No, the commandments are not good in Seven Deadly Sins.

Q6- Is Escanor stronger than Meliodas?

Ans- No, Escanor is not stronger than Meliodas.

Q7- Who is the strongest of the Ten Commandments?

Ans- Meliodas is the strongest of the Ten Commandments.