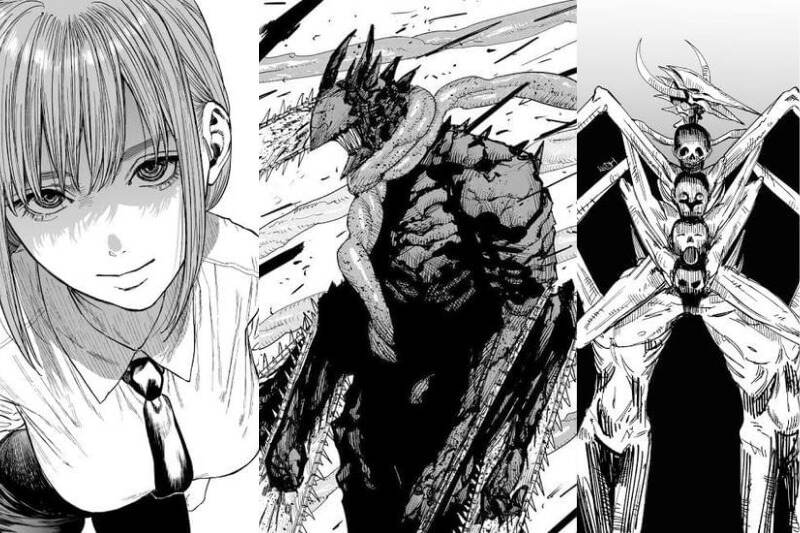 Chainsaw Man is a Japanese Manga written by Tatsuki Fujimoto, which was first seen in 2018. It primarily focuses on Denji and its devil pet Pochita (Chainsaw Devil). Devils are supernatural creatures who embody the fear of humans. They are immortal and hostile towards both devils and humans, having supernatural abilities and not to be messed with. 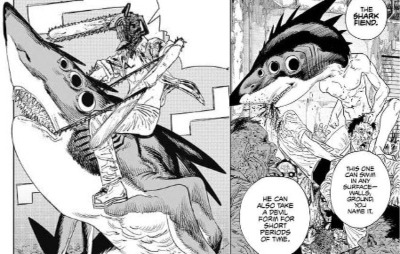 On the fifteenth position on our list of Strongest Chainsaw Man Devils, we have the Shark devil, who is a Devil Hunter from Division 4 in Japan.

He has enhanced strength and speed and can heal himself by drinking blood. As he has combined himself with the shark devil, he can transform into a massive shark. After death, he can be revived in Hell, making him an immortal. 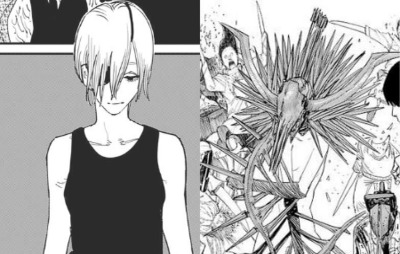 On the fourteenth position on our list of Strongest Chainsaw Man Devils, we have the Crossbow Devil. The crossbow devil combined with Quanxi, who is a Chinese Devil Hunter.

She has enhanced strength, speed, and supernatural abilities since her transformation into a fiend. Quanxi can heal her wounds by consuming blood.

After her transformation into a hybrid, she can manifest crossbows and an unlimited arsenal of arrows on her arms and head at will. She is an excellent swordswoman and wields multiple blades with extreme proficiency. 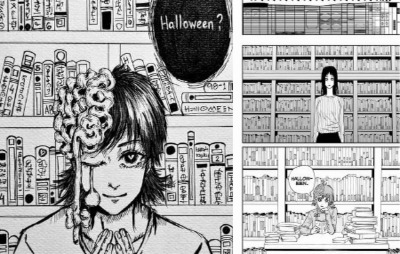 On the thirteenth position on our list of Strongest Chainsaw Man Devils, we have the Cosmos Devil. The Cosmos Devil combined with Cosmo.

Cosmo can give a person all the knowledge of the universe and induce him/her into a trance where they are able to only say and think about “Halloween” until they die.

She can also be revived in Hell and can heal herself by drinking blood. 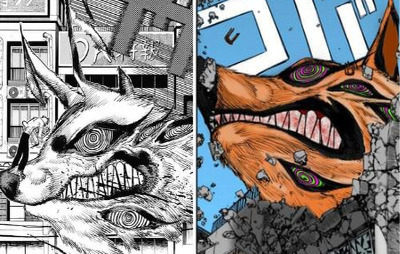 On the twelfth position on our list of Strongest Chainsaw Man Devils, we have the Fox Devil, who has not combined with one person but has formed contracts with many humans.

Like other devils, he is immortal and can heal himself by drinking blood.

Fox Devil can be summoned by the people who formed a contract with him, allowing them to summon a part of his body to attack devils. The Fox devil only enables attractive people to summon his head and does not attack devils combined with humans as he doesn’t like the taste. 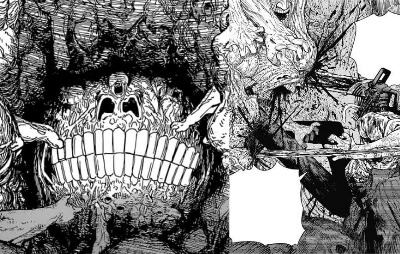 On the eleventh position on our list of Strongest Chainsaw Man Devils, we have the Eternity Devil.

The Eternity Devil is a really powerful being and can manipulate space and time inside his stomach, making it impossible to escape once someone is stuck inside.

The eternity devil can also heal himself using blood, create contracts with humans, and is immortal. Once someone enters the area that eternity devil has converted into its stomach, it will kill all sentient beings inside that designated area. 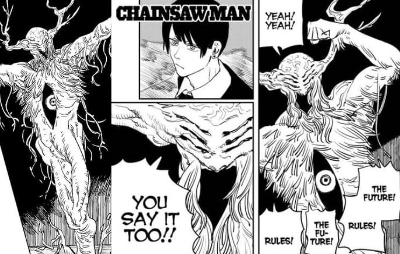 The Future Devil lets anyone who puts their head in a hole which is on his chest) look at their future. It can form contracts with humans allowing them a glimpse of his power (Aki Hayakawa can see a few seconds into the future) but also taking their lifespans or something worse in return.

He can also drink blood to heal himself and is also immortal like other devils. All of these abilities put it in the top ten for our list of the Strongest Chainsaw Man Devils. 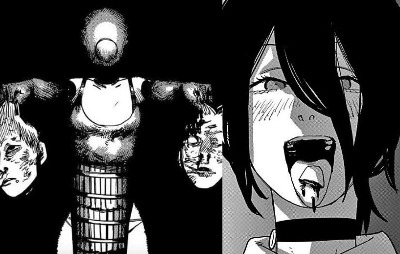 The Bomb Devil is one of the most powerful Devils who has combined with a woman named Reze. Reze has superhuman strength, speed, reflexes, and insane durability. In her hybrid form, she can make her own skin explode and also shoot it by flicking the skin off her hands.

In her Bomb devil form, she can convert her arms into torpedoes and can fly using multiple explosions to contribute to her mobility. Reze can also heal herself by drinking blood. Reze is one of the primary antagonists, one of the strongest devils in chainsaw man, and in ninth place on our list. 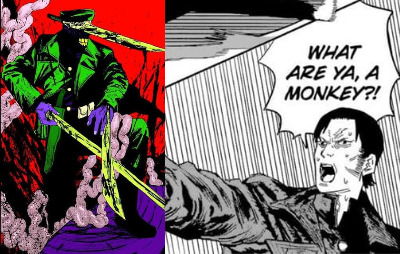 Katana Devil merged with a human who held a grudge against Denji and is hell-bent on revenge.

He can transform into his hybrid form, which contains swords coming from his head and arms. Katana Man gained inhuman strength, speed, and agility in this form.

He can also attack relentlessly with his swords and is very proficient, so much so that he was able to overwhelm Aki and Denji in a fight.

He can also heal by drinking blood and is a very powerful Devil. The only way to undo his transformation is by removing the katana from his hand, and after undoing the transformation once, he cannot fight for a while.

All this put the Katana Devil in the eighth position in our list of the Strongest Chainsaw man Devils. 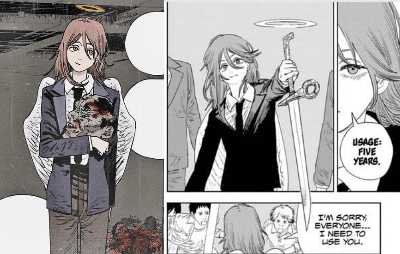 The Angel Devil is a bizarre yet extremely strong devil in Chainsaw Man. He has combined with Angel, and in his Hybrid form, he can utilize the devil’s power to its most tremendous potential.

Angel has insane durability, strength, speed, and agility. He, too, is immortal and has the ability to heal himself by drinking blood.

Angel has the broken ability to absorb someone’s life span by simply touching them. Angel can create weapons from the aforementioned absorbed life spans. The weapons have supernatural power.

Depending on how many years’ worth of lifespan the angel decides to use (five, fifty, hundred, thousand), the level of power of the weapon has increased exponentially, allowing him to defeat much stronger opponents.

This broken ability puts Angel Devil in the seventh position in our list of the Strongest Chainsaw man Devils. 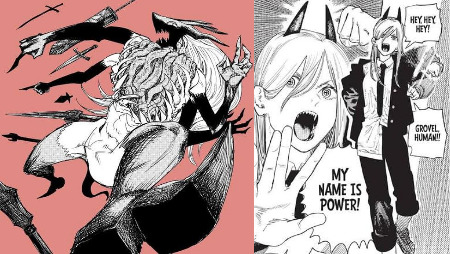 The Blood Devil is in sixth place on this list because of its mind-blowing abilities. Power has superhuman speed, strength, agility, and reflexes.

She can use the blood inside her as well as others to create weapons. She has an acute sense of smell, being able to smell blood from a distance.

In her hybrid form, Power can manifest thousands of spears and swords made of blood to attack several times. Blood Devil also allows Power to give away her life energy and can heal herself by drinking blood. The more blood power consumes, the stronger she gets, and the horns on her head start to grow. 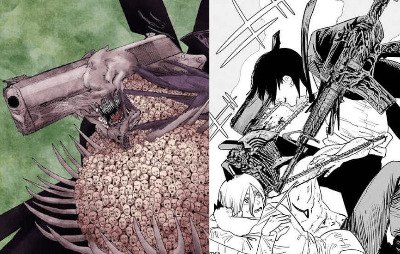 The Gun Devil is one of the most dangerous devils in Chainsaw Man, with insane speed and durability. He can fire multiple bullets from all the guns on his body accurately and efficiently.

Gun Devil’s speed is genuinely terrifying as he was able to eliminate 1,200,000 people all over the world in under five minutes.

Gun Devil’s flesh also acts as an excellent power-up food for other devils and is treated with great importance. He can also regenerate his body involuntarily and can create contracts with humans. 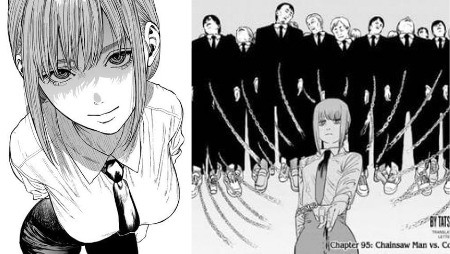 In the fourth place, we have the strongest female character possessed by one of the strongest devils in Chainsaw Man, the Control Devil.

Makima has superhuman strength, smell, and speed, but she also has a really broken ability. This ability allows her to control anyone she considers to be inferior to her and can even force the people and animals under her control to form contracts with other devils.

Makima also erases any memory of her controlling them and can use the abilities of other devils who have made contracts with people under Makima’s control.

This is an insane ability and has allowed her to use the abilities of the Angel Devil, Future Devil, and Zombie Devil. She can also inflict a lot of damage using just her index finger, causing people before it to be crushed, literally.

Along with these abilities, she can teleport to anywhere she wants using rats, heal herself by drinking blood, and is immortal. 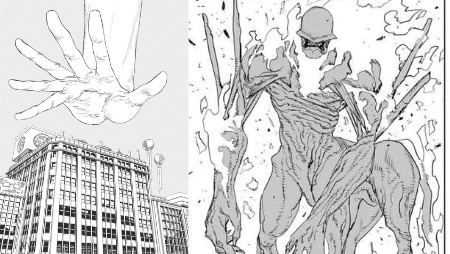 Hell Devil is one of the most powerful devils in Chainsaw man because it has a direct connection to Hell. Using this connection, his ability allows him to emerge from a door in the form of a giant hand containing six fingers.

He can choose individuals to transport to Hell at will. Although many details about his abilities haven’t been revealed as of now, he is considered to be very powerful.

Hell Devil can send all sentient beings inside a particular area directly to Hell after creating a contract. He can drink blood and heal himself and is also immortal, putting him in the third position on our list of the Strongest Chainsaw Man devils 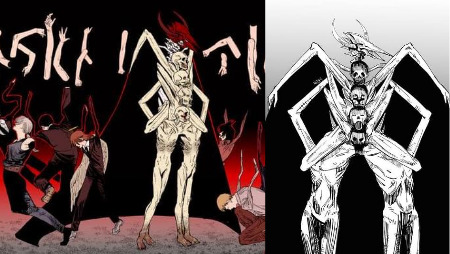 Darkness Devil is one of the primal fear devils. Primal Fear is the fear that humans have since they are born without exception. Darkness Devil is considered to be a primordial being because of its immense strength and the fact that he did not die once.

He has inhuman speed, strength, and immortality. His ability allows him to manipulate darkness itself. If the Darkness Devil stares at someone, be it a devil or human, it/he will start to hemorrhage.

Just a piece of flesh from the Darkness Devil is powerful enough to amplify a person/devil’s power to extreme lengths. Along with this, he can drink blood and heal himself like all other devils.

He is also immortal, making him one of the strongest devils in chainsaw man so far and in the second place on our list. 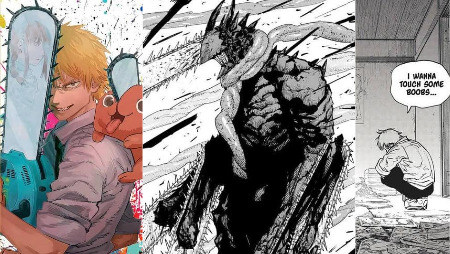 Pochita was the Chainsaw Devil before he combined with Denji. In the Hybrid form, Denji has Inhuman strength, speed, stamina, durability, and reflexes and is a fantastic fighter.

He has chainsaws as appendages and can disconnect the chains on those chainsaws to capture his enemies. The Chainsaw Devil has a broken healing power allowing him to construct his entire body out of a single organ.

The reason why he is on the top of this list as the Strongest Devil in Chainsaw Man is because of his ability to erase the existence of a devil.

Once the Chainsaw Devil devours any devil, that devil will permanently cease to exist on Earth and in Hell. This makes him exceedingly feared amongst all devils since devils are supposed to be immortal. Pochita is an eternal being able to spawn in Hell after his death on Earth.

With this, we have reached a conclusion, and we hope you guys enjoyed the article, Top 15 Strongest Chainsaw Man Devils. If you liked this, don’t forget to check out the Chainsaw man Manga for more.