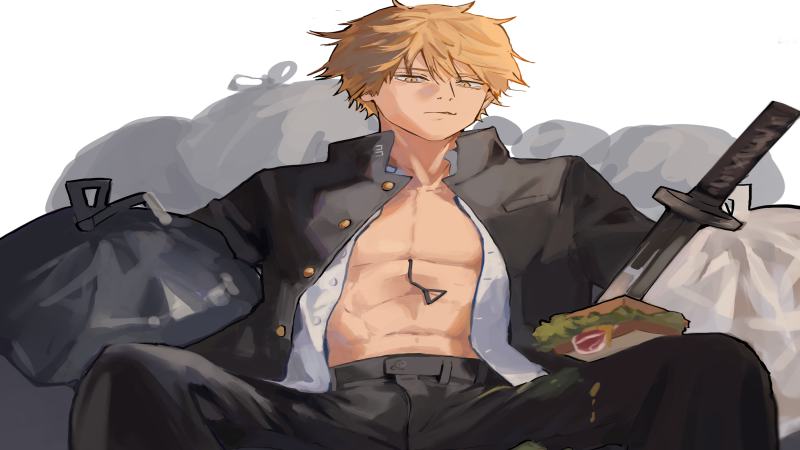 Chainsaw Man is filled with stylish and handsome male characters who can easily make their way among the female fanbase. While we are familiar with most of them, there are some other charming characters too who are not talked about enough. So, today we will be looking at 15 of the hottest Chainsaw Man male characters.

We can all guess who the first and second spot is going to belong to. The main battle for the positions will be after them. It will also be interesting to note if the devils and fiends make their way in this list.

We were first introduced to Fushi in the initial parts of the series when they were hosting a welcome party for the new members of Special Division 4.

Unlike Aki, he did not mind bringing his fiend to a party which shows that he was a considerate man.

Moreover, having a high IQ score of 134 made him all the more desirable and one of the hottest Chainsaw Man male characters. He had unruly hair and kept his tie buried in his pocket.

Joey was a foreign devil hunter from the United States of America who had come to Japan searching for the Chainsaw Devil. Although his time in the series was cut short by his untimely death, he had a wild exotic look on him.

Moreover, he could change into the appearance of any person since he had made a contract with the skin devil.

Thus, he could make himself dashingly handsome and charming according to the needs of the other person. He had spiky hair, and he was seen wearing a coat over his shirt.

Katana Man is affiliated with the Yakuza and has the powers of the Katana Devil. He is quite tall with slick black hair. His most prominent feature is his sideburns which makes him stand out among the rest.

His attire comprises a baggy leather coat, and he was extremely devoted to his grandfather.

He loved his grandfather dearly and wanted Denji to apologize for killing him. His affection for his grandfather was pretty cute, making him one of the hottest male characters in Chainsaw Man.

In contrary to his name, Violence Fiend was soft and caring from the inside. The way he bonded with Angel Devil was extremely sweet and melted our hearts for him.

He usually kept himself wrapped in a suit and had to wear a gas mask on his face. He was also quite muscular, which made him an attractive hunk.

His polite nature and behavior signified he was an absolute gentleman. Thus, without a doubt, Violence Fiend had most of the qualities needed in a perfect man and took his place as the 12th hottest csm male character.

The Shark Fiend was an extremely lovable character from the beginning of his introduction. He was playful and loved to hang around with Denji.

He was extremely devoted to Denji, and the way he always praised him as the Lord Chainsaw Devil was very adorable.

He had a caring personality and did not think twice to jump on the Darkness Devil in order to protect Denji. He also had a sturdy built with a pretty decent height.

Kurose hailed from the Kyoto division of the Public Safety Devil Hunter group. He had medium-length black-colored hair that was parted from the middle on both sides.

He had a huge scar running across his face which speaks of his valiant deeds in previous encounters with devils.

The scar also makes him quite hot, along with the intense look in his eyes. Moreover, he also had his Kyoto accent, which was quite different from the others, making him even more attractive.

Thus, he deservedly takes the 10th spot as one of the hottest Chainsaw Man male characters.

Tolka was an attractive Devil Hunter in Chainsaw Man who was an accomplice of Santa Claus. He was fairly tall with short hair and pale eyes. His devotion to his master knew no bounds, and he could do anything for her.

He wore a hoodie with a quiver on his back whenever he went hunting which gave him a mysterious look. He took all life forms casually, and killing anyone was not a big deal for him as long as he did it for his master.

Arai was a member of the Special Division 4 and was a plain and simple guy. He was a mature boy with a strong sense of justice.

He did not hesitate even for a moment to save Kobeni even though he was not close to her. He had shiny black eyes with spiky hair.

A prominent scar on his left cheek highlighted his courageous self. A man like Arai, who held himself strictly to his moral values, is bound to take his place as one of the hottest characters in Chainsaw Man.

Kusakabe was one of those characters in Chainsaw Man who commanded respect just by their appearance. He liked to keep himself clean and fit and was very conscious of dirt.

He wore a pair of glasses, and his slick hair was combed neatly on his head, reaching up to his shoulders.

He looked very handsome and was also one of the best bodyguards in the Public Safety Devil Hunter group.

Aldo was a part of the three brothers who had come to Japan from the United States of America looking for the Chainsaw Devil.

Like his brothers, Aldo had that exotic look on him. Moreover, he was the kindest of them all and hesitated before taking a human life.

He had three scars on his right eye with uncombed black hair. His sensitive personality earns him bonus points among the female fans and makes him one of the hottest Chainsaw Man characters.

Kishibe is a veteran Public Safety Devil Hunter and has aged like a fine wine. Although he acts as he works without emotion, he has a soft side to him.

His chemistry with Quanxi was quite hot, and his stern and rough nature make him all the more attractive. His stoic nature is one of his attractive qualities, along with his scraggy facial features.

It is very easy for the fans to confuse Angel Devil for a female due to his slight effeminate features. Angel Devil is one of the prettiest characters in Chainsaw Man, earning him 4th place on this list.

His auburn, long hair, and white wings emerging from his shoulders give him a desirable appearance. He is also very polite in his behavior and acts courtly with everyone. Moreover, his fondness for ice cream is very quiet, making him a favorite among the fans.

Yoshida is a tall and handsome man who made his appearance as a private devil hunter. He has charming looks, and he is also a powerful fighter with his Octopus Devil.

He has a prominent beauty spot under his lips and has a casual dressing style. Moreover, his playful and mischievous personality is loved by the female fans, which is in contrast to his ruthless fighting style.

Denji manages to acquire the second spot in this list of hottest Chainsaw Man characters. Denji can easily attract girls, as we have seen the case with Reze and Himeno.

His cute and likable personality makes him an easy character to crush over. Deep down, he also has an emotional side that we saw in the later parts of the series. Moreover, the way he acted in front of any girl was extremely funny and sweet.

His emotional and sentimental side makes him a character that we can relate to, along with his good looks.

It is not possible to attract a girl like Himeno if you are not devilishly handsome. Aki also had insane composure and kept his hair tied in a top knot.

While Aki and Denji deservedly deserve the first and second spot, Yoshida makes a surprise entry for a side character. Fans can read Chainsaw Man manga officially from Mangaplus Shueisha.

We will be coming back with even more Chainsaw Man articles. Till then, stay tuned.