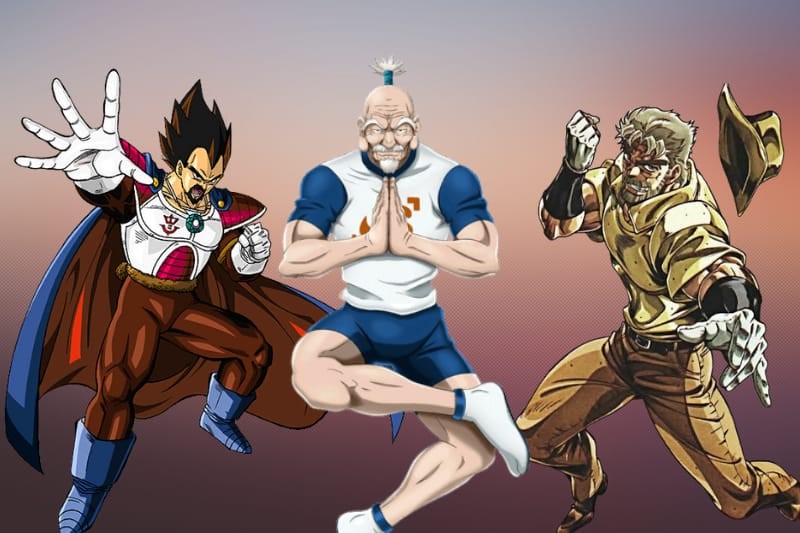 In the anime world, there are plenty of anime guys who look so manly with their muscular bodies and cold nature. However, anime guys with beard have their own ways of looking manly and are hard to approach.

In this article, we talk about some of the hottest anime guys with beards who will steal your hearts. Even though some of them are overly old, they will never miss a single opportunity to grab your attention.

Furthermore, they look so unique and attractive due to their several stylish beards. As a consequence, there are a large number of guys present who have attractive beards, and most of them play a major role in their respective series.

So let’s dive into this incredible list of the top 15 hottest anime guys with beard as of 2022.

Yuugo Tennouji is one of the major villains in the Steins Gate series. He is also the landlord of Rintaro Okabe, the series’ main character.

Yuugo is a tall, muscular, bald man with a beautiful brown beard. Aside from his tough exterior, he is a soft-spoken individual who enjoys watching CRT television. He also greatly cares about his wife and daughter and can do anything for their safety.

Vincent Volaju is one of the major villains in the Cowboy Bebop series. He is a tall, young man with black messy hair and a long black beard.

Vincent is very dedicated to his greatest goal of finding the way to heaven. His cold look and calm personality make him so popular in the series. Due to being the major villain in popular series and having a long stylish beard, he is considered one of the most popular anime guys with a beard.

Flit Asuno is the main character of the Mobile Suit Gundam AGE, the twelfth series of the Gundam franchise. He has well-groomed hair and a white beard that suits him well in his old age.

Flit seems to be a born genius who created the AGE-1 Gundam, the greatest technology. However, he did lots of hard work and research in order to make it. His excellent leadership skills and keen intelligence helped him to defeat his ultimate enemy, Vagan.

Iskandar is one of the strongest spirits summoned by the Holy Grail in the Fate Zero series. He is a huge, muscular man with attractive facial features and beautiful red hair,

Iskandar has a red beard and usually wears classical outfits. He is a very nice guy who respects a lot of his followers and greatly cares about true friendship. His physical strength is extraordinary, and he also used his legendary sword, Spatha, which made him an incredibly strong warrior.

Danjuurou Tobita is one of the minor villains in the My Hero Academia series. He is widely known by his villain name, Gentle Criminal.

Danjuurou has a gentleman-like appearance and is always seen as decent and well-dressed. His mustache and medium-sized white beard make him so unique and attractive. Despite being a villain, he does all things politely and smoothly. He also possesses a very rare yet powerful quirk: Elasticity, which allows him to make anything stretchable and bouncy just by touching it.

Asuma Sarutobi is one of the significant members of the Sarutobi clan in the Naruto series. He is an ordinary-looking guy with a black beard who loves smoking.

Asuma does not hesitate to express his original thoughts, whether they hurt others or not. He was also a great teacher and greatly cared about all of his three students. His keen intelligence and excellent ninja skills make him one of the most skilled ninjas in his clan.

Hades is one of the major villains in Fairy Tail, one of the greatest magical anime series. He first served as the leader of Fairy Tail’s guild, and later he formed a dark guild.

Hades is an old man with a long, curly white beard that reaches below his chest. He always wears decent yet attractive outfits and possesses a very calm personality. His excellence at using chain magic and bullet magic makes him one of the strongest guild’s masters.

Monkey D. Garp is the ancestor of Monkey D. Luffy, the main character of the One Piece series. He is a well-built old man and has unusual facial features and a white beard.

Garp is a notable marine and usually wears a bright white suit. He had a very energetic and determined personality and held great regard for his position as a Marine Admiral. His great leadership skills and extraordinary physical strength make him an incredibly strong character in the series.

King Vegeta is a minor character in the Dragon Ball franchise and the father of Prince Vegeta. He has the same appearance as his son, but he is taller and broader than him.

King Vegeta has a well-trimmed beard and quite a proud personality. He is the most powerful Saiyan of his time, capable of destroying the entire planet on his own.

Genryuusai Shigekuni Yamamoto is the founder of the entire Gotei 13 in the Bleach series. Gotei 13 is the main branch of Soul Society whose primary goal is to protect humanity.

Yamamoto is an old yet strong man with a long white mustache and beard. He is very dedicated to his high position and is regarded as the most respected person in the Soul Society. His extraordinary swordsmanship skills combined with flame make him the greatest warrior in his entire organization.

Killer Bee is one of the significant characters in the Naruto franchise. He is one of the skilled ninjas who fight in the war against Obito Uchiha alongside Naruto, the series’s main character.

Killer Bee is a dark-skinned old man who has a white beard. He always wears a pair of sunglasses and a white headband. He has a unique fighting style with exceptional swordsmanship skills that make him an incredibly strong ninja. Due to his fancy outfits and attractive beards, he is regarded as one of the hottest anime guys with beard.

Van Hohenheim is the father of Elric’s brothers, the main characters of the Full Metal Alchemist series. He is a tall, handsome gentleman with long blonde hair and a medium-sized beard.

Hohenheim seems like a very cold-hearted person, but he is actually very gentle and kind. He left his family, not for his own sake, but to find a way to save his family and humanity. Due to his use of the power of the philosopher stone to the greatest extent, he is considered one of the strongest alchemists in the series.

Joseph Joestar is one of the most popular and the second Jojo of Jojo’s Bizarre Adventure franchise. In his older age, he has well-recognized short hair and a gray beard.

Joseph does not have a bit of patience and always reacts excessively in most situations. He always enjoyed his fights and always gave his best shot, even if his opponents were weaker than him. His main ability is Ripple, while he also uses several powerful abilities.

Marshall D. Teach is one of the major villains in the One Piece series and one of the four strongest pirates. He is a dark-skinned man with an extremely gigantic body and a small black beard.

Marshal is also widely recognized by Blackbeard and has a very complex personality. His goal is the same as Luffy’s, i.e., to become the next pirate king, but his ways are completely different from Luffy’s. Blackbeard is considered one of the most popular anime guys with beard for being a major character in a popular series.

Isaac Netero is the chairman of the Hunter Association in the Hunter x Hunter series. He is an old bald man with a white mustache and a medium-sized beard. However, he can enhance his physical body to a greater extent and become a muscular man.

Netero is also considered the strongest nen user of his time and possesses godly moves such as 100-Type Guanyin Bodhisattva. His personality is quite the same as Gon’s, which is charming and fun-loving. While fighting, he turns quite merciless and brutal, which he already shows in the fight against Meruem, King of the chimera ants.

We’ll wrap up this article by talking about every single guy on the list who has an attractive beard. We compiled this incredible list based on their popularity and roles in their respective series.