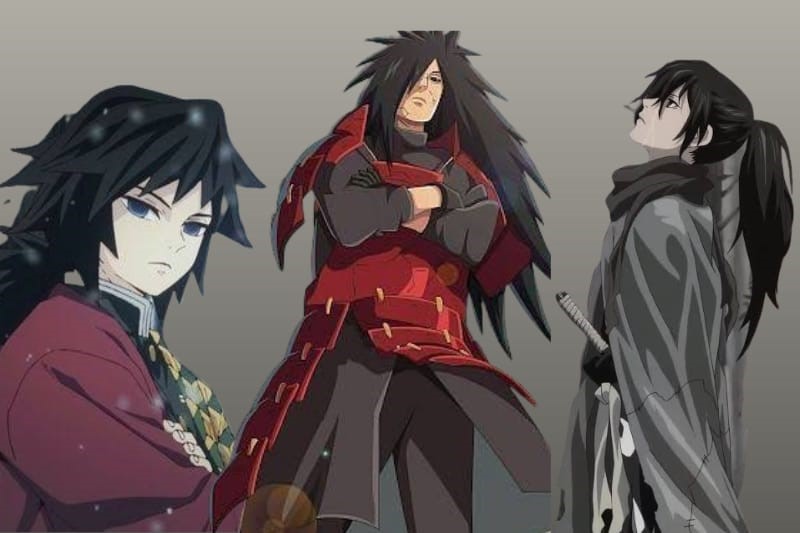 Anime guys with long black hair seem more attractive and relatable than any other hair color. Most of these guys have an enormous amount of popularity due to their amazing personalities and looks.

You will also note that the majority of anime guys with black hair have very calm personalities and possess incredible powers. Some of them serve as protagonists in their respective series, while some serve as antagonists.

So, without any further delay, let’s have a look at the Top 10 anime guys with long black hair as of 2022. 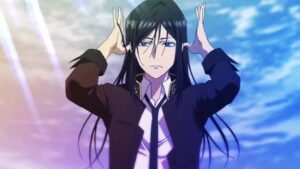 Kuroh Yatogami is one of the significant characters in the K Project anime series. He is a handsome young man with long black hair and blue eyes. He usually tied his hair into a ponytail and left some bangs.

Kuroh is a very important member of the Silver Clan and has a bright silver aura. His special ability allows him to manipulate gravity to any extent.

14. Daryuan (The Heroic Legend of Arslan) 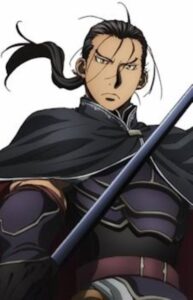 Daryun is one of the significant characters in The Heroic Legend of Arslan series. He is one of the most loyal and strongest knights of Arslan, the series’ main character.

Daryun is a tall, well-built young man with long, beautiful black hair and sharp facial features. As a knight, he usually used his sword and spear in fighting against his opponents.

He is a very straightforward person and does not hesitate to share his views in front of anyone, even Arslan. 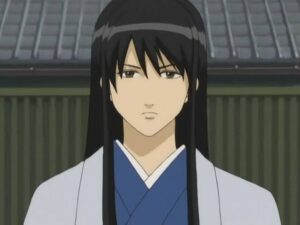 Katsura Kotarou is one of the former friends of Gintoki in the Gintama anime and manga series. He is the main leader of “The Anti-Foreigner Faction” and wants to overthrow the government.

Katsura has an ordinary body stature and long black silky hair. Due to his lack of common sense and illogical decisions, he seems very stupid. However, he is incredibly intelligent, which is why he studied at the prestigious school with a scholarship. 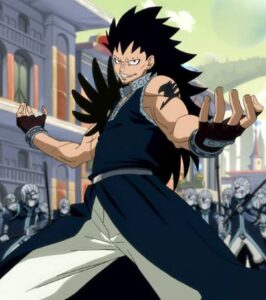 Gajeel Redfox is an Iron Dragon Slayer in the Fairy Tail anime and manga series. He is a very tough guy with incredible strength and also has a good heart.

Gajeel is a very tall man with large body stature and long spiky black hair. He also fought against several powerful opponents and successfully defeated them.

Due to his cold personality and long spiky hair, he is regarded as one of the coolest anime guys with long black hair. 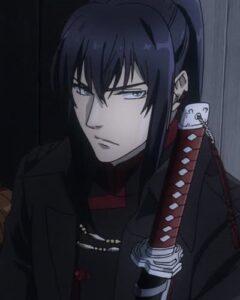 Yu Kanda is an artificially created exorcist in the D. Gray Man anime and manga series. He has quite attractive facial features and beautiful long black hair (in the manga) tied in a ponytail with bangs and strands.

Kanda is one of the hottest anime guys with long black hair because of his cool looks and amazing hairstyles. He is quite an egoistic individual and despises weak people, even his fellow exorcists. 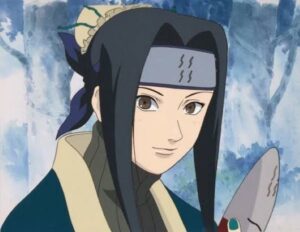 Haku is one of the major characters in the Naruto franchise and the inheritor of the Yuki clan—a clan that lived in the Land of Water. He has feminism-type facial features and long black hair that he styles beautifully.

Haku is a very skilled ninja, and he can fight for anyone in exchange for money. Due to being one of the strongest ninjas of his time, he is reincarnated to fight in the Fourth Shinobi World War.

He also plays an important role in the war and shows his incredible power to the greatest extent. 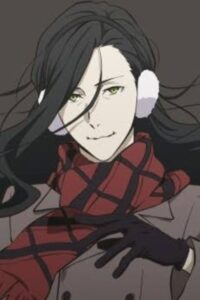 Arthur Rimbaud is a French spy in the Bungou Stray Dogs anime and manga series. He was assigned to investigate a mysterious project of the Japanese military.

Arthur is a slim man with gold eyes and long black hair that reaches his back. Some of his hair fell in front of his face with some strands. After losing his memory in the explosion at Suribachi City, he became a member of the Port Mafia. 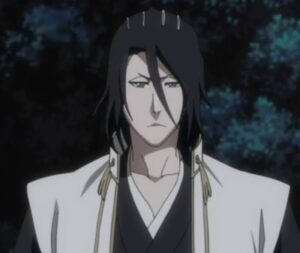 Byakuya Kuchiki is one of the supporting characters in the Bleach manga and anime series. He is the 28th head of the Kuchiki Clan, one of Soul Society’s noble families.

Kuchiki has long, black hair that he keeps in place with elaborate white headdresses called kenseikans to signify his nobility. He is a proficient swordsman and has a vast knowledge of magical spells. His Bankai technique is also very strong, like the series’ other characters. 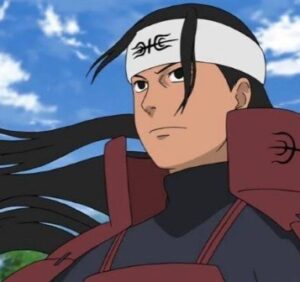 Hashirama Senju is the first Hokage and leader of the Senju clan in the Naruto franchise. He is a brown man with long black hair that reaches his waist.

Hashirama proclaimed himself as the “God of Shinobi” because of his incredible powers and skills. Due to his enormous popularity and incredible powers, he is considered one of the most popular anime guys with long black hair. 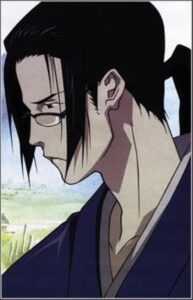 Jin is one of the main characters in the Samurai Champloo series, alongside Fuu and Mugen. He is a handsome man with long black hair that he tied in a ponytail and left two strands on either side of his face.

Jin generally wears spectacles that suit his cold and calm personality. He is one of the most talented swordsmen in the series and also possesses various technical skills.

He is also known as one of the popular anime guys with long black hair for being one of the lead characters in a popular series. 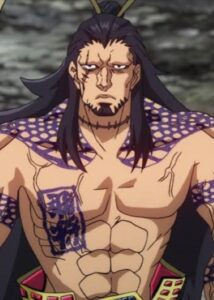 Lu Bu Fengxian is one of the main characters in Season 1 of the “Record of Ragnarok” anime. He will face Thor as humanity’s candidate in the first round of Ragnarok.

Lu Bu is a very tall and muscular man with battle scars covering his entire body. His dark black hair falls to his waist and is styled into a bun with two golden feathers that look like pheasant tail antennas.

Due to his incredible strength and willpower, he was regarded as the strongest warrior in human history. 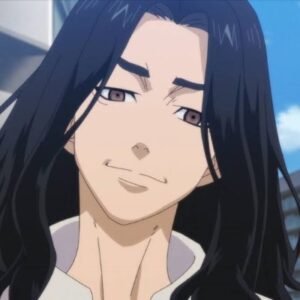 Baji Keisuke was one of the main characters in the Tokyo Revengers anime series. He was a founding member of the Tokyo Manji Gang and later became a member of the Valhalla gang.

Baji is a tall teenager with jet black hair that is shoulder length and slightly wavy. He only ties it when there is a conflict; otherwise, he keeps it untied. His two razor-sharp canines, which give him a vicious grin, are his most distinguishing features.

Baji is not only attractive but also one of the series’ strongest characters. Due to his distinct personality and amazing look, he is regarded as one of the most badass anime guys with long black hair. 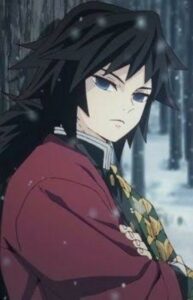 Tomioka Giyu is a significant supporting character in the Demon Slayer: Kimetsu no Yaiba anime and manga series. He is the current Water Hashira and one of the strongest members of the Demon Slayer Corps.

Tomioka is a tall, muscular young man with fair skin. His messy, medium-length black hair is pulled back into a little ponytail on top of his head. He has thin, angular eyebrows and dark blue eyes.

His beautiful facial features and calmer personality make him one of the hottest anime guys with long black hair. 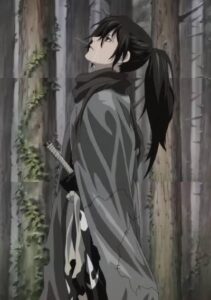 Hyakkimaru is one of the most popular as well as hottest anime guys with long black hair. He embarks on an adventure of killing powerful demons in order to get back his body parts.

Hyakkimaru is a slim young man with beautiful facial features and long black hair. He mostly tied his long hair in a ponytail that provided him with an amazing look. He possesses incredible swordsmanship skills and several powerful techniques that make him the strongest character in Dororo anime series. 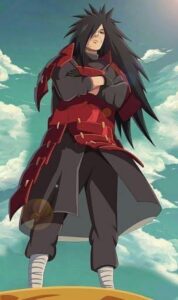 Madara Uchiha was born in the legendary Uchiha clan and later he became the leader of his clan. He is an average built young man and has long black spiky hair that reaches to his waist. He also possessed one of the most powerful chakra, Indra chakra that allowed him limitless stamina for a long fight.

Madara is the strongest villain in the Naruto series and one of the greatest villains of all time. His incredible ninja skills and Jujutsu technique are superior to any of the series’ villains.

Due to his immense popularity among fans, he is known as one of the most popular anime guys with long black hair.

We’ll conclude this article by discussing every anime guy on the list who has long black hair. This wonderful list was prepared based on their popularity and beautiful appearance. Each of them has a distinct appearance as well as attractive hairstyles that you will undoubtedly adore. They also play significant parts in their series and make an indelible impression on the hearts of viewers, even if they play a negative role.