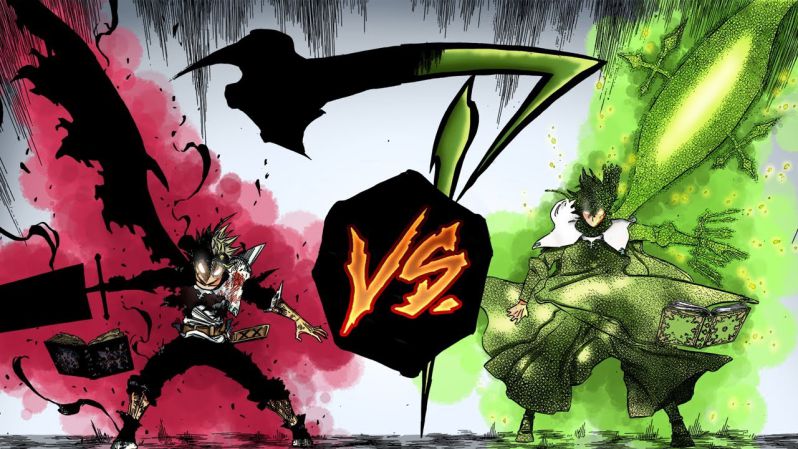 Black Clover is a manga series written and illustrated by Yuki Tabata. The story is built around Asta, a young boy who is apparently born without any magic power. It has been serialized in Weekly Shonen Jump since February 2015. Asta and Yuno are two of the most important characters in Black Clover. Today we are going to compare them on the basis of their various aspects and the latest chapters’ power growth.

Asta Black Clover: Asta is an orphan raised under the care of a church in Hage after his mother abandoned him on the church’s doorsteps. Asta has a unique power of Anti Magic which he uses to nullify other’s magic. He has a black five-leaf clover grimoire that contains various anti-magic-based spells.

Yuno Black Clover: Similar to Asta, Yuno is also an orphan raised under the church in Hage. Yuno uses Wind Magic to generate and manipulate wind. Sylph, the spirit of the wind, chose to serve him after Yuno found her scroll in a dungeon. He possesses a four-leaf clover grimoire that contains various wind-based spells.

Asta possesses an insane level of physical strength. He can do a thousand push-ups and swing heavy swords single-handedly. He can punch holes in rock walls with almost no injury to himself. He can also swing his swords with a brute force that sends enemies crashing down into rocks. In addition to this, the Witch Queen further enhances his arm strength using Blood Magic.

Compared to Asta, Yuno lags behind a lot in terms of physical strength. He is not the strongest of fighters on a battlefield and he doesn’t possess brute strength. Although he makes up for it using his other aspects he would lose one-on-one against Asta if it was only based on their respective strengths. Thus, in this category, Asta is ahead of Yuno.

Asta possesses no mana and therefore can’t use any magic. Although this feels like a massive weakness, this enables Asta to wield Anti Magic without suffering any weakening effects since he has no magic to drain. This also makes him untraceable by mana sensors and immune to the life-draining substance of the underworld.

On the other hand, Yuno possesses a tremendous amount of magic power being the rightful heir to the throne of the Spade Kingdom. This allows him to cast two different spells at the same time easily. After being possessed by Sylph, his magic powers increased even further. Despite all these Asta is a direct counter to him since he can use his Anti-Magic to nullify Yuno’s Wind Magic. Thus, Asta has a major advantage in this aspect compared to Yuno.

Asta possesses enhanced speed being the host of the devil Liebe. He is capable of moving at above-average speed without the help of his Anti-Magic. This grants him the mobility and flexibility to attacks his enemies using his Swords at a faster rate making them unable to dodge his attacks.

Yuno can use his Wind Magic and manipulate wind to grant his tremendous mobility during a battle. He can use whirlwinds to lift and propel himself through the air. This gives him a solid advantage on Asta since he can modify his attacks and come up with various ways to further increase his speed. Thus, Yuno has an upper hand on Asta based on speed.

Asta has a variety of techniques in his arsenal related to Anti-Magic. These include Bull Thrust, Black Meteorite, Black Hurricane, and Demon-Slayer Sword: Black Divider and Black Slash. In addition to this, he can combine his Anti-Magic with Mirror Magic to use Mirrors Slash and Mirrors Meteorite. He also possesses Ki that allows him to use a sixth sense and react to unseen attacks and people.

Meanwhile, Yuno is also not far behind in this department. He can use a variety of magic, the strongest among them being his Wind Magic. Using his Wind Magic he can use Towering Tornado, Crescent Kamaitachi, Tornado Fang, Gale White Bow, and Trident Spell. In addition to these, he can use his Creation Magic to produce powerful moves like Swift White Hawk, Wind Blades Shower, and Heavenly Wind Ark. Moreover, with the help of Sylph, he can use Sylph’s Breath, Spirit Dive, Spirit System, Spirit’s Hushed Dance, Spirit of Zephyr, Liable Tempest, and Spirit of Boreas. Thus, in terms of techniques both of them are more or less equal in this respect.

Asta has taken on some very powerful enemies in this series and has also been victorious against them. In the recent chapters when Zenon Zogratis unleashed one of the demons on the Clover Kingdom, Asta united with Liebe and sliced apart the demon using his Black Divider. Previously he has also managed to defeat Undine, the spirit of water. He used his Anti-Magic and Ki sensing to scout Lolopechka and broke down the water-barrier surrounding her.

Yuno has also gone against some formidable opponents and managed to dominate them. Recently he went head to head against Zenon Zogratis with his Spirit of Boreas and managed to overwhelm him. Even in the past, he has defeated the likes of Foyal Migusteau and Gaderois Godroc. Thus, both of them have significant experiences in previous battles and are equal in this respect.

Asta is connected to the devil Liebe who possesses Anti-Magic. This allows him to access this energy and further enhances his Anti-Magic Power. This increase in power enables him to nullify a Gravity Singularity and coat weapons with Anti-Magic. After Asta learned to unite with Liebe it made his Anti-Magic more ferocious allowing him to dominate enemies with ease.

On the other hand, the wind spirit Sylph resides in Yuno. Yuno can use Spirit Magic to summon Sylph to assist him in battle. Being the spirit of the same element Sylph makes Yuno’s Wind Magic all the more powerful which makes him a dominant figure in battles. However, compared to Sylph, Liebe is far more powerful and dangerous with his Anti-Magic and gives Asta the edge in this regard.

Asta vs Yuno: Who will win?

The battle between Asta and Yuno is going to be an interesting and long-drawn-out battle. Asta is far greater than Yuno in terms of physical strength while Yuno is more powerful in terms of Magic. However, Asta’s ability of Anti-Magic makes things a little more complicated. Anti-Magic will allow Asta to nullify Yuno.

During a one-on-one battle, Asta can manage to suck up Yuno’s Wind Magic with his demon dweller sword. Even him Yuno uses his powerful spells like Mana Zone and Spirit of Boreass, Asta can make them practically powerless by uniting with Liebe who in turn is also far stronger than Sylph. In the end, Yuno is indeed very powerful but he doesn’t stand a chance against Asta due to his Anti-Magic.

Thus, we can conclude that in the current scenarios Asta can easily win against Yuno in a one-on-one battle. However, it will be foolish to completely write off Yuno. If Yuno can manage to take care of Asta’s Anti-Magic in some way, he can overwhelm Asta with his immense Magic Power. The latest chapters of Black Clover can be read in Mangaplus Shueisha or Viz Media.