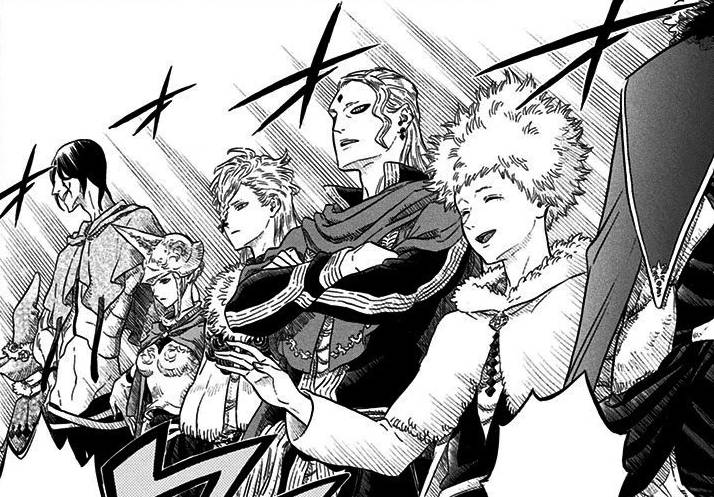 Black Clover is an ongoing manga written by Yūki Tabata. The manga follows Asta, a young orphan who is born without any magic in a world where magic is everything. Despite that, Asta works hard and aims to be the strongest magic knight – The Wizard King.

If you’re a Black Clover fan, you would want to know who is the strongest captain in Black Clover. Here is a list of The Clover Kingdom Captains ranked based on their current power level in the Spade Kingdom Arc.

Gueldre Poizot overlooked the activities of the Magic Knights of the Purple Orca squad as their captain until he was found guilty of betraying the Clover Kingdom.

He uses Permeation Magic which lets him turn invisible, and he can phase through objects which makes him impalpable while he uses his magic. He can also create shapes and objects using his magic and utilize them for combat.

He can also make others invisible and intangible by touching them. Since he was a Magic Knight Captain, he has immense power at his disposal.

However, since Asta can cancel out magic, he was easily able to defeat him along with Rill when Gueldre tried to escape capture.

Kaiser Granvorka replaced Gueldre as the Purple Orca’s Captain at the request of Julius.

He has the ability to produce and manipulate magic whirlwinds which, when hurled at an opponent’s magical attack, can disintegrate their magic attack.

Kaiser was able to retain some of the magic he had while he was possessed by an elf hence, leading to his magical power getting enhanced.

Kaiser and the Purple Orcas fought with one of the demons from the Spade Kingdom but were easily defeated.

Dorothy Unsworth is the captain of the Coral Peacock squad. She specializes in Dream Magic which enables her to create a dream-like dimension and control substances inside the dream world.

She is also capable of reading others’ minds and manifesting their thoughts in her dream world. Dorothy was also possessed by an elf and was able to retain some of the elves’ magic after their defeat.

During the Spade Kingdom invasion, Dorothy fights with Moris, but Moris destroys her dream magic with his new devil powers.

Later, after Lucifero partially manifests, all the captains come together alongside Asta to fight Lucifero.

Rill is the captain of the Aqua Deer squad and is the youngest Magic Knight Captain. He uses Painting Magic which lets him bring his paintings to life and control it.

He can also generate any of the four elements and control it and also use his painting magic for transforming himself or for disguise.

Rill was also possessed by an elf and was able to retain some of their magic. He trained in the Heart Kingdom and later took part in the Spade Kingdom invasion.

Rill was able to provide significant help during Charlotte’s and his battle with Vanica. He was able to improve in the midst of battle after getting inspiration from Noelle’s Saint Valkyrie Dress and produced the Twilight of Valhalla technique.

However, Rill would not have been able to take on Vanica/Megicula or any of the other Dark Triad on his own.

Charlotte is the captain of the Blue Rose squad. She uses Briar Magic which lets her create and manipulate briars for combat.

Due to the curse effects, her briar magic transformed into the blue rose magic, which was weak.

She trained in the Heart Kingdom and fought during the Spade Kingdom invasion. She was able to battle on equal grounds with Vanica, during which she bound and restrained Vanica with her anti-curse briar magic.

She was also able to generate the true form of Briar magic by using the pure mana flow from the Heart Kingdom and growing red rose briars.

Using True Briar magic, Charlotte was able to ward off Megicula’s curse using her newly developed anti-curse magic. Her True Briar is, so far, one of the most powerful magic techniques.

Jack was a commoner and is now the captain of the Green Mantis squad. He utilizes Slash Magic, using which he can generate mana blades that slice through magic. His blades have the ability to adapt under difficult circumstances enabling Jack to slice through any kind of magic.

During the Spade Kingdom, Jack was able to deal immense damage to Dante. He improved his cutting ability and slice through Dante’s Gravity Magic.

His blades then adapted to Dante’s regeneration abilities and cut through him, giving him deep wounds. After Magna’s battle with Dante, Jack lands the finishing blow to Dante.

Nozel Silva is a nobleman and the captain of the Silver Eagle squad.

He specializes in mercury magic which lets him create and control mercury which he can then utilize for both offense and defense. He can also use mercury magic to shape objects or weapons for combat purposes.

During the Spade Kingdom invasion, Nozel finally gets his revenge for Megicula cursing his mother, Aciel. Also, he was able to singlehandedly destroy Megicula’s body.

He has an incredibly large repository of magic power since he is a noble. However, there are times when we can clearly see that Noelle surpassed Nozel’s magical abilities.

In the Black Clover Captains’ Rankings, Willaim Vangeance, the captain of the Golden Dawn, is placed at 3rd position. He is said to be the most powerful captain in Black Clover and has the highest chances of becoming the next Wizard King. He uses World Tree Magic which enables him to produce and control trees. He can use this for combat as well as for healing purposes.

William was born to a noble and, has immense magic power at his disposal. This made him incredibly talented and landed him the position of the First Captain of the Golden Dawn Squad.

When Zenon invaded the Golden Dawn base, not only did William fight with Zenon, but he tried to protect his squad members at the same time, which is what led him to get captured by Zenon.

William was also able to retain some of the elves’ magic since he was Patolli’s host.

Fuegoleon has become one of the strongest Black Clover Captains after being chosen by the Fire Spirit, Salamander. He is the captain of the Crimson Lion squad. Fuegoleon actively contributed to the Spade Kingdom Invasion, successfully took on several Dark disciples, and briefly fought with Lucifero to rescue The Resistance members.

Fuegoleon is one of the most vital captains, and he might be able to fight on equal ground with one of the Dark Triad.

Yami Sukehiro, the captain of the Black Bulls, is the present strongest magic knight captain in Black Clover. He is a skilled swordsman who has an affiliation to Dark Magic which lets him control darkness. He infuses his magic into his sword and skillfully wields his sword.

During the Spade Kingdom Arc, Dante invades the Black Bulls’ base to find Yami. During their battle, Yami is able to land powerful blows on Dante, forcing him to use the maximum of his power.

Finally, with the help of Asta, Yami successfully defeats the most vital member of the Dark Triad but gets captured by Zenon when he does not see him coming.

That concludes the rankings of the Black Clover Captains. You can always check out the manga on Viz and see what all exciting fights are going to happen in the Spade Kingdom arc! Come back for more Black Clover rankings and news!

Q1. Who is the strongest captain in Black Clover manga?

Ans. As of now, by comparing all their power levels, we can conclude that Yami Sukehiro is the strongest captain since he was able to defeat the most vital Dark Triad member, Dante.

Q2. Who is the strongest Magic Knight in the Clover Kingdom?

Ans. The Wizard King, Julius Novachrono, is the strongest magic knight. He has exceptional command over his Time Magic which is entirely unique from other magic powers.

Q3. Who is the strongest devil in Black Clover?

Ans. The strongest devil is Lucifero, who is one of the rulers in the underworld. So far, no magic knight stands a chance against the overwhelming power of Lucifero.

Q4. Who can defeat Lucifero?

Ans. Currently, Lucifero has overpowered every magic knight that has fought him. The only way to banish him is to use Dark or Anti Magic.

Characters in Black Clover who can Defeat Dante

Does Apple TV have Korean Dramas? 2022