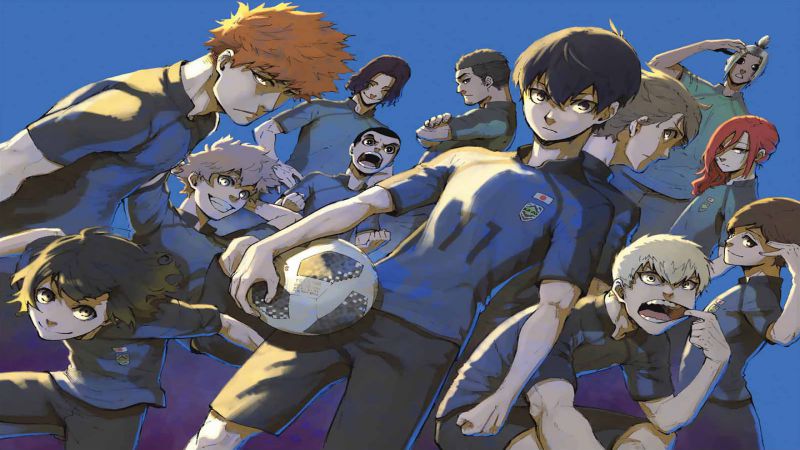 The anime adaptation for Blue Lock has recently been announced and it has driven fans crazy. Blue Lock will be one of the most anticipated animes in the coming year and may even take Haikyuu’s place in terms of popularity.

Thus, there is no better time to check out the top 10 best players in Blue Lock. They will be ranked based on their performances and the skills that they possess.

Speed is one of the essential assets in football, and Hyoma Chigiri is by far one of the fastest players in Blue Lock. This allows him to run down the wings at a tremendous pace and spread the play so that it gives the midfielders a chance to utilize the space created in the middle.

Even though he suffered from a career-ending injury in his childhood, he managed to gather himself up and solidify his place in the first eleven of Blue Lock.

Bachira is the monster of Blue Lock who has formed a chemical reaction with the protagonist of this series since the beginning. He is an excellent dribbler who can bring the ball further up the field and make a perfect transition from defense and offense.

The way he danced through the Japan U-20 players further highlights the extent to which he has sharpened his skills.

Kenyu managed to come out in #5 out of all the forwards in the story, which automatically makes him one of the best Blue Lock players.

He is a beast when it comes to one-on-one situations and has proved to be a valuable asset for the team in midfield. Similar to Bachira, he is also a great dribbler and specializes in finding the easiest route through the opposition defense.

Tabito Karasu’s aggressive plays make him one of the best players in Blue Lock. Although he started as a forward, Ego was the first person to spot that his abilities are better suited as a defensive midfielder.

He acts as the pivotal point of the team by not only breaking the opposition’s plays but also forcing a quick counter for his team. He is the link between the forwards and the defenders and has played his part perfectly against the Japan U-20 players.

Aiku is one of the few players who can get into Blue Lock’s main team. He was also a forward when he first started his career but soon found out that he was more satisfied in denying the other players from scoring.

His instinct is out of this world as he can read the game perfectly. This allows him to position himself in such a way that he can intercept any pass, which makes it almost impossible to go past him.

Nagi is a prodigy in the story and by far one of the best Blue Lock players. He was so technically gifted that he didn’t even have to spend too much energy while playing.

His strength lies in his insane ability to trap any ball with such perfection that it makes scoring all the easier. He acts as the attacking midfielder for his team, who can give line-breaking passes to the forward.

There is no doubt that the protagonist of our story is one of the best Blue Lock players. Similar to Aiku, Isagi Yoichi can also read the game perfectly and come up with unique ways to break the opposition defense.

His specialty is in linking up with the other players, which brings out his best plays. He can also shoot instinctively at the goal, with the highest probability of the ball ending up at the back of the net.

If Bachira is the monster, then Shidou is the devil in Blue Lock. The fact that his talent is recognized by Sae automatically makes him one of the best players in Blue Lock.

He has every aspect needed to be one of the best players in the world, starting from spatial awareness to poaching abilities. His muscular physique also enables him to rise up and meet the balls that Sae sends in his way.

Rin is the younger brother of Sae in this story and the best player in the Blue Lock project. He has always been in his brother’s shadow but is slowly catching up to him.

He is a playmaker who can combine well with a second-striker to completely destroy a defense. His strength lies in his off-the-ball movements, which can make him the best forward in the future.

There is no doubt that Itoshi Sae is the best Blue Lock player. Unlike the other players, Sae is a genius midfielder who went to play abroad from a very young age.

This has improved his game to such a level that no one in the story is even close to his talent currently. We have seen him overwhelming his opponents numerous times, especially when he tore through the Blue Lock team with little to no effort.

This is the final list of the top 10 best players in Blue Lock. It goes without saying that this list is bound to change as the story progresses further. We have also not included the five world players since very little is known about them at the moment.

Q1- Who is the best striker in Blue Lock?

Ans- Itoshi Rin is the best striker in Blue Lock.

Q2- Who is the antagonist of Blue Lock?

Ans- Itsohi Sae is the antagonist of Blue Lock.

Q3- Who is the main character in Blue Lock?

Ans- Isagi Yoichi is the main character in Blue Lock.

Q4- Who is the best player in Blue Lock?

Ans- Itoshi Sae is the best player in Blue Lock.

Q5- How old is Isagi and what’s his rank?

Q6- Does Blue Lock have powers?

Ans- No, Blue Lock does not involve powers.