Skip to contentHome » Anime & Manga » Naruto vs Luffy: Is Luffy in Gear 5 Stronger than Naruto in Baryon Mode? 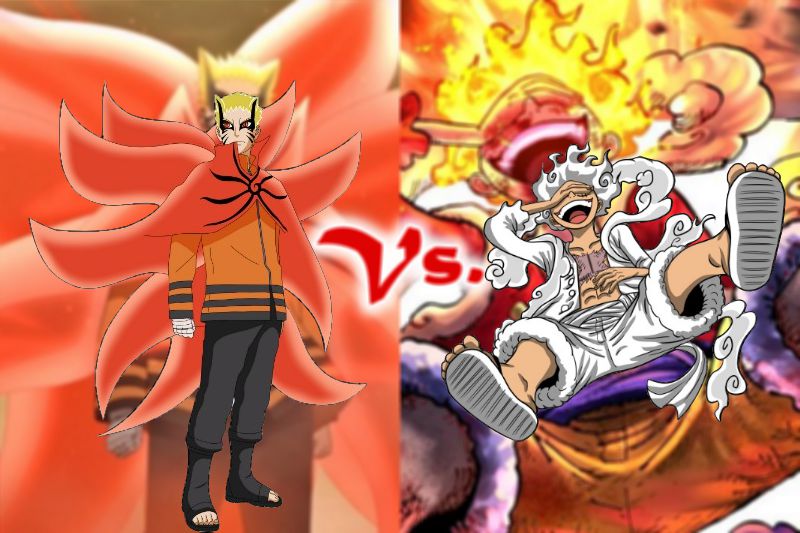 Naruto and Luffy have both been two of the most iconic and beloved anime characters in the world. They have maintained their immense popularity for years. Both hail from two of the greatest shonen manga, Naruto and One Piece, respectively, and have become extremely strong in their own universes. Because of their huge individual fanbases, a question has always been prevalent among the fans: who would be the winner in a Naruto vs Luffy match?

Naruto was already the strongest shinobi in the world at the end of the main series. In Boruto, his strength has only become more effective and controlled. His powers reach their peak at Baryon Mode. The Baryon Mode is not only Naruto’s strongest form but the most powerful in the series’ universe. In Baryon Mode, Naruto’s powers outdo the powers of the Otsutsuki gods.

While One Piece is very far from over, Luffy has already become the strongest in his universe, at least to the extent we know of. Luffy has already been getting more and more powerful after the time skip, but Luffy’s Gear 5 has turned our perception of his powers upside down. His Gear 5 powers are so almighty that it is unbelievable in their existence.

Now, if a fight were to break out between the two strongest characters of their universes, it would be grand and earth-shattering. Both will give each other tough competition, but at the end of the day, Luffy will take the cake as the winner. Why and how? That’s what we’ll discuss as we get deeper into their powers and drawbacks.

Naruto Uzumaki is the Seventh Hokage of Konohagakure and the jinchuriki of the nine-tailed fox, Kurama. He is the strongest shinobi in the world, together with Sasuke Uchiha. But Naruto’s already incredible powers are not enough to fight and defeat the Otsutsukis.

That becomes clearer during Sasuke, Boruto, and his fight against Isshiki Otsutsuki. Naruto and his companions are immediately overpowered by Isshiki.

Baryon Mode is Naruto’s strongest form, and nothing else so far in the series comes even close to its powers. It gives Naruto some unbelievable abilities but also comes with some drawbacks. Here are the abilities and drawbacks of Naruto’s Baryon Mode.

While Baryon Mode gives Naruto godlike powers, it has tremendous drawbacks. In Baryon Mode, Naruto and Kurama’s fused chakra starts to take away massive amounts of energy and even lifespan from both of them.

Kurama warns Naruto to keep his movements contrite and not move unnecessarily because of the rapid loss of lifespan. Naruto had to be extremely controlled, both mentally and physically, in this mode to fight Isshiki.

But even with the utmost care, the price of Baryon Mode is too much. The loss of lifespan ultimately causes Kurama to perish, even if Naruto ends up alive. It is a move that can only be used once and as the very last resort.

According to Luffy, Gear 5 is the peak of his powers. It’s actually the awakened form of his Devil Fruit. In Gear 5, Luffy’s hair, eyebrows, and clothes turn white, his eyes turn red, and his hair looks like it’s flaming. Luffy’s heart also beats very fast; its rhythm follows the drums of liberation.

The abilities and drawbacks Luffy gains in his Gear 5 are the following:

Currently, Luffy has only one weakness i.e., Sea water. being a devil fruit user, his powers gets absorbed in the sea water. The best way to defeat Luffy is to use objects made of sea stone.

Naruto vs Luffy: Who Would Win between Baryon Mode and Gear 5?

Both legendarily powerful, Naruto and Luffy will know how to hold their own against each other. Naruto is extremely fast in his Baryon Mode and would overwhelm Luffy with his speed. But with Luffy’s advanced Kenbunshoku Haki, it wouldn’t be so easy. Besides, Luffy, in his Gear 5 form, can withstand almost every physical attack without damage.

If Naruto’s Baryon Mode touches Luffy, it will drain his lifespan, but the process is gradual and will need multiple physical touches. In that time, Luffy can easily turn into a giant to crush Naruto and can even hit him with lightning. In fact, Luffy’s attack is powerful and crazy enough to reshape Naruto’s body momentarily.

But the most crucial aspect of Naruto vs. Luffy would be time. Naruto has very limited time in his Baryon Mode, and while Luffy, too, cannot hold his Gear 5 form for a long time, his durability is much greater than Naruto’s. With his nearly indestructible Gear 5 form, Luffy would outstand Naruto’s Baryon Mode and become the winner in Naruto vs Luffy.

Now, let’s see the individual aspects of Naruto vs. Luffy.

Naruto in his Baryon Mode and Luffy in his Gear 5 form both possess a great deal of strength. Naruto can lift Isshiki’s immensely heavy boxes with his chakra tail easily. But Luffy’s strength in Gear 5 is far greater. In fact, he can even turn into a giant. So, Luffy wins this round of Naruto vs. Luffy.

Naruto is actually pretty durable, being an Uzumaki and the jinchuriki of Kurama. But Naruto’s Baryon Mode comes with such drawbacks that he isn’t in a position to take on a lot of hits. His lifespan continues to be consumed with time, and that doesn’t promote durability in battles.

Luffy, on the other hand, is generally very durable with his rubber powers and innate durability. But Luffy’s Gear 5 increases that durability by many times. He can take on any attack without major injury and still be able to hit back. When it comes to durability, there’s no defeating Luffy in Gear 5.

Naruto’s great speed is an asset for his reflexes too. As a shinobi, his senses and reflexes are already very honed. But Baryon Mode is another thing entirely.

In Baryon Mode, Naruto’s reflexes are so fast that he can easily catch Isshiki’s black rods in the air, stopping them despite their extremely high momentum.

Isshiki’s rods are fast enough that not even Sasuke, with his Rinne Sharingan, can follow properly. Naruto stopping them without a blink only goes to show how unbelievably fast his reflexes are.

Luffy also has very sharp reflexes. As mentioned before, his reaction speed is at lightspeed. And coupled with his advanced Kenbunshoku Haki, catching him off guard is a long task. But Naruto, in his Baryon Mode, can certainly make it possible.

That’s not to say that Naruto’s Baryon Mode abilities are inferior. But compared to Gear 5, Luffy, whose body can virtually do anything he wants, from cartoon-like violence to actually catching lightning with his hands.

Naruto’s Baryon Mode exponentially increases his chakra, and his high-powered hits, coupled with his superfast movements and reflexes, are extremely dangerous. But faced with Luffy in Gear 5, that would not be enough.

In conclusion, we can say that Luffy wins the Naruto vs Luffy fight mainly because of the sacrificial nature of Baryon Mode as well as the simply crazy powers he gains in Gear 5. Naruto is an experienced fighter and has plenty in his arsenal to boast about. While he might not win against Luffy’s Gear 5, his Baryon Mode is lethal for most other characters in the anime world.