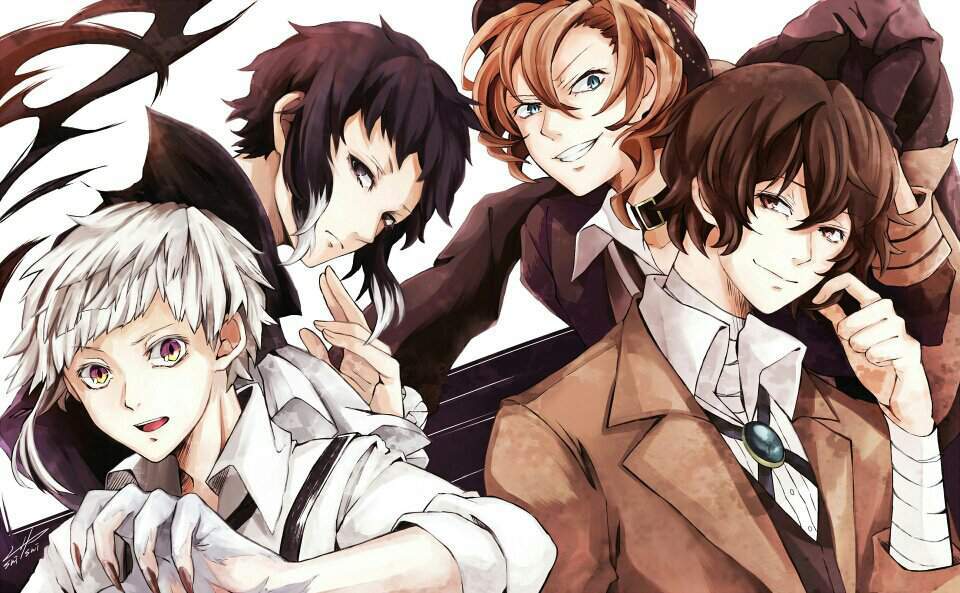 Kafka Asagiri and Sango Harukawa‘s Bungo Stray Dogs’ manga and anime fandom has continued to grow since its first episodes were released. The credit can be passed on to its thrilling and comical script with eloquent and discernible dialogues.

Characters’ dialogues bring out the best understanding of their internal dispositions. Serving this purpose, Asagiri has often managed to blur the lines between fiction and reality. Take a look at the Top 10 Best Bungo Stray Dogs Quotes ranked from the manga series below.

Nakajima Atsushi, who now works for the Armed Detective Agency, once was a casualty of a severe identity crisis. He was introduced as a lost boy who was confused between his two forms of existence, i.e., the human and the weretiger. Later in the series, if there was a person he could greatly resonate with, it was Izumi Kyōka.

Atsushi said this line to Akutagawa Ryunosuke in the Port Mafia Arc. After getting kidnapped, Atsushi was prepared to leave Port Mafia’s ship with Kyōka. Akutagawa, who was against it, was of the opinion that Kyōka’s worth only remained in her assassination job or her existence was useless.

Atsushi could strongly feel her state of torment and wanted to help her loneliness. He further became upset at Akutagawa’s preposterous and insensitive speech.

F. Scott Fitzgerald is a character whose entire gifted ability naturally associates him with the world of money and power. As the leader of the Guild, he is highly perceptive and experienced with the ways of the world. In the Guild Arc, we saw his fall and then his rise to power towards the end of the Guild Aftermath Arc.

In the Cannibalism Arc, Atsushi and Kyōka visited him to ask for his help. From the fall of the Guild, Fitzgerald has learned a great deal about failure. Seeing Atsushi’s efforts, he complimented the Armed Detective Agency for still managing to hang on to faint hopes.

Kunikida Doppo is a man who always sticks to his ideals. He believes them to be the true approach to any life situation. They would always lead him to the correct results. From the start, we have understood him to be a man of dignity and principles.

In the OVA Bungo Stray Dogs: Hitori Ayumu, Kunikida fought against Katsura Shōsaku. Katsura was adamant about avenging his arrest two years ago. He had cornered him and tied him.

He was scornful of Kunikida’s obsessiveness with his ideals. Just then, Kunikida tricked him into remotely activating his gifted ability and gained the upper hand over him. On a winning blow, he commented how his ideals were just not mere words, and he works hard for it.

According to Atsushi, these lines are from a book that he had read during his stay in the orphanage. When he had first read it, he couldn’t understand what it meant. Interestingly, this quote belongs to one of the books of the Japanese author Nakajima Atsushi.

In the Guild Arc, Atsushi was reminded of these lines when he was struggling to carry Q‘s cursed doll to Dazai Osamu. He knew that in order to stop the attacks in Yokohama inflicted through the doll, Dazai’s ability was needed.

As he succeeded in meeting Dazai, his constant thinking process concluded to him how his judgment overlapped ‘this’ phrase. His instincts told him that the alliance with the Port Mafia was a befitting strategy to defeat the Guild.

In the OVA Hitori Ayumu, Kunikida was fighting to protect the little girl and the train passengers. Kunikida was cornered by the criminal. Constantly scornful and critical of Kunikida’s ways, he had planned this revenge on him.

But Kunikida again managed to come up with a successful strategy. When he made this statement, we were exposed to a side of him revealing that he had never been oblivious to the dangers of the world.

He was not a fanatical idealist. He proclaimed that no matter the cost, the ideals which can save lives, he would always stick to them. In his presence, he won’t allow anyone to get crushed.

These were the last words of Sakunosuke Oda to Dazai Osamu. Oda worked for the Port Mafia and only had two friends – Dazai Osamu and Sakaguchi Ango.

Deceived by his Port Mafia boss Ougai Mori and his own friend Sakaguchi Ango, he was led to his death. Although he and Dazai had opposite personalities, they had an unbreakable admiration for each other.

Even as a mafioso, Oda had his own beliefs and understood the meaning of individuality and life. His last words were a piece of advice to a morally lost Dazai who suffered from a severe existential crisis.

Atsushi has always been trying to escape his past self. He had unconsciously hurt people with his gift. When running away from the Guild at the train station, Atsushi, Haruno, and Naomi encountered the Port Mafia’s curse ability user Q.

He manipulated Atsushi’s vision and had his mistake that everyone was being controlled. But it was him alone who was trapped by the cursed ability.

When Dazai nullified Q’s ability and Atsushi realized the reality, he went into frantic despair. To bring him back to his senses, Dazai slapped him and gave him this advice as his senior.

Fyodor Dostoevsky, the executive of the Decays and Angels, has so far proved himself to be a formidable adversary to Dazai, challenging him in intellect. Since the Hunting Dogs Arc, the two had been playing their cards from their prison cells. In the Sky Casino, Dostoevsky had laid out a plan to counter the Armed Detective Agency and the Hunting Dogs, depending on Sigma.

Sigma was the owner of the casino. Dazai asserted him to reveal why he chose Sigma, who doesn’t have any combat ability. To this, Dostoevsky replied that since he was an ordinary man, he would be desperate to protect his sole possession in the entire world, i.e., the casino.

In the Cannibilism Arc, the Armed Detective Agency was on the run, being falsely accused. The group with Yosano, Jun’ichirō, Kenji, Kyōka, and Kunikida were shown to be struggling due to the uncertainty of the future.

When everyone was despairing, Kenji brightly cheered everyone up with these lines. They knew they had nowhere to run. But after Kenji’s words reached them, their determination to survive and rise, the Detective Agency again grew stronger.

In the manga, Dazai tells this to Dostoevsky. The two in their cells had been sharing the reasoning of their plays. Dazai asked Dostoevsky why he used coin blasts as a decoy to set up the Armed Detective Agency and the Hunting Dogs in the Sky Casino. Dostoevsky reasoned this to attain “perfection and harmony” for his plan.

There was no way for the Agency and the Hunting Dogs to form an alliance from the start. He had already mentioned on the ‘page’ that no one would believe in the Agency’s innocence. Dazai bursting into laughter, pointed at his overconfidence, replied that, in reality, Dostoevsky or he is not the ones who are making any changes.

Here we conclude our list with our final ranking. Keep reading the Bungo Stray Dogs manga that will return in November and watch the first three seasons on Crunchyroll or Netflix.