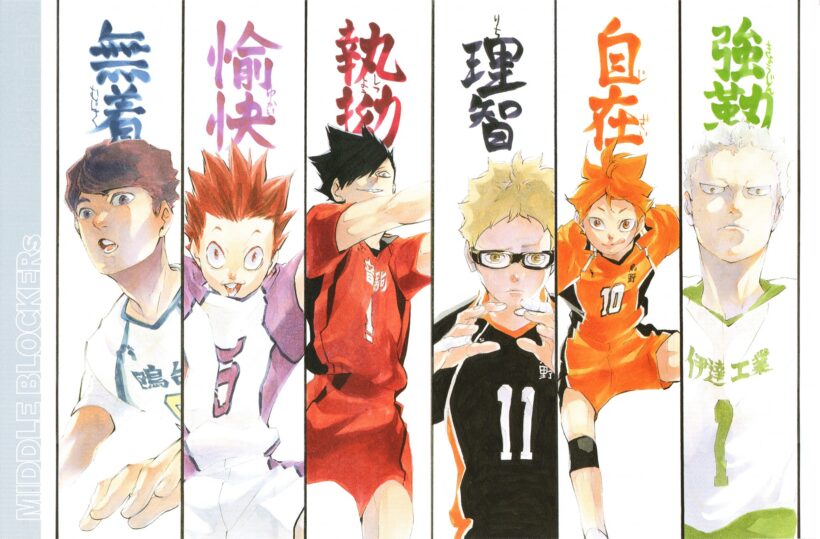 Haikyuu has been by far one of the most popular sports anime in recent times. The different characters and their growth as the story goes on have been amazing. One of the reasons this story is so captivating is how the sport of volleyball is represented. And the different positions in which the characters play and their growth into those positions. Let’s have a look at the Top 15 Best Middle Blockers in Haikyuu!!

Of all the positions in Volleyball, the middle blocker is one of those positions which is the center of attention. As they play, they end up determining whether the team wins or loses the game. As that position takes part in both the defense and the offense.

Although not much is shown of Eikichi, he is one of those blockers who has impressed with his relatively small screen time. In the summer training camp in the match against Karasuno, he was able to get his fingers on Kageyama’s quick set after completion of only one set. He is also invited to the All-Japan Youth training camp which is a testament to his caliber. But, we are still keeping him in the 15th position as not much is known about him.

He is the second Middle blocker in Shiratorizawa after Tendo. Although he is not as motivated as other players in his team, he compensates for it with his analytical skills. Tendo ones tell Taichi that his blocking style is more analytical as he uses Read Blocking during matches. He is also the director of the Shiratorizawa’s three-man block.

Keisuke Unnan is a 3rd-year student of Mujainazaka High School. He is known as “Mujainazaka’s Twin Tower” along with his teammate Nozomu Mami. Unnan has extremely fast reflexes which help him in blocking quick sets. He is also able to block Bokuto’s spikes in the national tournament.

Nozomu Mami is the other part of “Mujainazaka’s Twin Tower”. Although he doesn’t have as much game sense as Unnan, he compensates it with his power. He also has extremely fast reflexes and works in tandem with Unnan. Together, they were able to commit blocks and score a point against Fukurodani’s quick set.

Issei Matsukawa is a third-year student of Aoba Johsai High School. Even though he is not a very intimidating blocker, he can be quite irritating sometimes. Matsukawa is an overall good player and has a good game sense. He gradually changes the path of the opponents’ spike and alters their course. Hinata hates this kind of blocking.

A 2 meters tall, Yudai Hyakuzawa is one of the tallest characters in Haikyuu. Because of his height, sometimes, he doesn’t even need to jump to his apex to block or even spike the ball. During his initial appearance, he was shown to be weak at receiving and did not take the game seriously. Later on, Hinata motivates him to improve his gameplay. Later in the series, he goes on to play for the national team. And this brings Yudai into the top 10 on this list.

In 9th place, it’s Lev Hiba. Lev is a first-year student of Nekoma High School. He is peculiarly tall and has long limbs thanks to his Russian heritage. Being in Nekoma, he is taught blocking by Kuroo. When first introduced, Lev wasn’t particularly a good blocker. He instead used to love scoring points with his spikes. But as time goes on, he understands how important teamwork is and starts correcting his bad habits. And by the time they come to nationals, he becomes extremely potent.

Gao Hakuba is part of Komomedai’s iron wall with Hirugami. Standing at 203 centimeters, he is one of the tallest characters until now. With his vertical reach of 350 centimeters, he can cover any spikers range and also air time. Due to the conditioning by their high school coach, Gao is mentally tough and as a result, his game isn’t affected because of the circumstances. Although one of his weaknesses is that he quite often gets fooled by the decoys. So, I couldn’t rank him as high as I would have liked. Yet, he still makes it to the 8th spot.

Fukurodani’s middle blocker Tatsuki Washio is a ‘work more talk less’ kind of guy. He has a good relationship with everybody in the team and knows which button to press. During the nationals in the match against Mujinazaka, he successfully blocked Kiryu and won the 2nd set of that match. Even though he lacks in speed, he has a very good combination of power, stamina, game sense, and technique. Even though he is not a gifted individual, he has all his bases covers and this gives him the 6th spot on the list.

Satori Tendo is a middle blocker who reads the opponent’s movements and jumps based on his intuition. The style of his clocking is called ‘Guess Blocking’. Satori is quick on his feet and physically strong thanks to Shiratozawa’s strict training regime. He uses his blocks to score points by commit blocking. Tendo does sometimes miss the spike completely but most of the time his guess is right. He is also extremely aware of where the ball is in the game. Satori even stopped the ball from dropping using his foot which shows his presence of mind during the game. Although he is very effective in his way of blocking, he sometimes is rather very ineffective. Because of this uncertainty of his, Tendo can’t go past number 5 in this list.

Tsukishima is a player who puts his brain to work more so than his body. He is constantly thinking as the game goes on. Tsuki is always calm and collected and has an extremely good game sense. He is also the director of Karasuno’s three and two-man blocks. His ability to set up a block can be seen in Karasuno’s match against Shiratorizawa, where he shows a gap in the block to Ushijima and baits the spiker to hit in the gap and then completely shuts him down. He was also called the MVP of that match by coach Ukai. He is seen taking advice from Bokuto and Kuroo during the summer training camp. Although Tsuki is an exceptional blocker, he is not very good at receiving and spiking which gives the opposition to target him sometimes.

Aone is a quiet person who is rather intimidating and an absolute beast when it comes to blocking. He is an exceptional read blocker and rarely falls for decoys. Opponents also find it difficult to get past him using their force as he is physically very powerful. Although he can read blocks, he can sometimes fall for fakes. And sometimes, thinking opponents get the better of him. This is shown in Date Tech’s match against Karasuno where Hinata is used as a decoy and Aone is lured by him to create a path for Asahi to score. Even though he is an animal in reading blocking or blocking in general, Aone sometimes fails to think from the opponent’s perspective and falls for their traps. And that’s the reason, we’re keeping him in the 3rd spot.

Kuroo is Nekoma High’s captain and middle blocker. He is like Tsuki, an extremely intelligent blocker. Kuroo is the one who taught most of the tricks to Tsukishima and also corrected some mistakes in his blocking form. He is also able to block Bokutu who is one of the nation’s top 5 spikers. Kuroo is someone, who is very good at his basics so he does all the small things right which in turn gives him great results.

He is also able to read and understand players and play according to their personalities. So he is always one step ahead of the opposition. Tsukushima’s move of showing the gap in the block and shutting down is something he learned from Kuroo. Although he is an exceptional read blocker and can predict what the opponent is thinking, he sometimes lacks stamina in long games and lacks a bit of power which he makes up for with his technique. And this gives Kuroo 2nd position in this stack of great Middle blockers.

Hirugami is arguably the best blocker in the series. He also has the nickname “Immovable Hirugami” as he does not get fooled by decoys and always follows the ball. He observes all the players and eliminates them based on their movements and then jumps to block.

While playing Karasuno, he reacts to Hinata-Kageyama’s minus tempo quick attack even though it was his first time facing them. He is also physically gifted and has been playing high-quality volleyball since his childhood as he was born in a family of volleyball players.

As Kenma says after seeing Hirugami block, he can’t be lured by the decoys at all. As someone who can think so fast and has incredible observation, you cannot get rid of his blocks which are so persistent. And this deservingly gives Hirugami the Number 1 spot on this list.

The given rankings are based on the impact the players have created in the story. And also depending on the way their skills are showed and explained. You might have a different opinion about these rankings, some other players, or different orders. Please feel free to share your opinions on our Twitter feed. You can watch Haikyuu!! all seasons on Netflix or Crunchyroll. You can also read the manga on Viz or Shonen Jump ( Mobile App ).