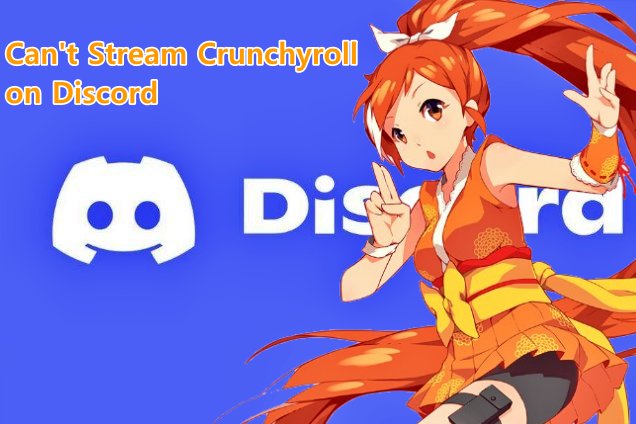 Most people are aware of the anime website, namely Crunchyroll. For those who are not, Crunchyroll is a famous website on which one can watch online anime. More than 1000 anime are hosted by this website that can be streamed online. It is free to use, but ads are there. Availability of ad-free watching is through paid Premium Membership.

Most people know that Discord has a feature on which one can stream whatever they are watching. So the question that arises here is if someone is watching Crunchyroll, then how to stream that on Discord with sound? After the streaming of Crunchyroll on Discord, then one can watch it with family and friends. Among the features of Discord, this one is the coolest feature.

Just like other services, it is possible to face issues with Crunchyroll. Among them, an annoying black screen is the most common issue. It is being faced by Crunchyroll users, especially while streaming it on Discord. One is likely to ask the way to get rid of that black screen. Or a way to stream the site without a black screen.

Why can’t I stream Crunchyroll on Discord?

When Crunchyroll fails to stream on Discord, then there can be only two chief reasons. Firstly, they have enabled hardware acceleration because it aids a wider variety of usual graphically intensive tasks. However, it is only advantageous in limited special-purpose applications.

Secondly, an older version of Discord can be an issue which is failed to be updated due to technical or personal reasons. Both of the reasons are described in detail below:

When it comes to hardware acceleration, it can be described as a process where applications offload many tasks to hardware in the system. Particularly in accelerating such kinds of tasks.

If someone has a stable and powerful GPU, then enabling hardware acceleration allows for utilizing the GPU. That GPU can be utilized to its full extent in games as well as all supporting use cases.

In terms of streaming, enabling hardware acceleration allows using the specialized hardware. It is typically the GPU that gives a better user experience and faster export times with the streaming software. If someone has a decently powerful GPU and the latest drivers, then it is better to enable hardware when there is an option.

For instance, in Google Chrome, sometimes hardware acceleration can result in issues like freezing or crashing on Chrome. To fix such issues, one might require to disable hardware acceleration. That can be the case when someone is streaming Crunchyroll on Discord; eventually, it results in a black screen.

In the case of Discord, it receives constant updates, just like most famous apps. Such updates can comprise anything from tiny typo fixes to groundbreaking new tools.

Also, like most apps, one should take care of keeping Discord updated whenever possible. In the case of the Desktop app, Discord automatically looks for updates, and it can be done whenever a user launches it.

It will not only keep the user up-to-date with the latest features but also keep them safe because the Discord team usually patches up security flaws.

Every update of Discord comes along “What’s New” newsletter through which all the major changes are listed. Updating makes it pretty simple with Discord, no matter which app version is being used.

How to Fix can’t stream Crunchyroll on Discord?

Hardware acceleration can negatively affect the experience depending on the device configuration. Usually, it prevents visual elements from correctly displaying on the screen. AMD/ATI or NVIDIA graphics cards are used by most new computers. It fails to have the ability to change the acceleration amount.

For users, the Discord app is perhaps the most famous platform to stream. New security patches, performance improvements, and features are brought up with every Discord update. To make the most of all of this, one should update the Discord app always, to its latest version.

How to stream Crunchyroll on Discord with sound?

Crunchyroll is the best place for manga and anime online, so go check it out and give it a try. Through this, one can discover the next series in a more accessible way.

Most people know the way to stream Crunchyroll on Discord; one can catch up on their favorite manga and anime at their convenience. Sometimes the user wants to share the new show experience with friends, which can be done by sharing the screen on Discord.

One of the chief issues generally encountered when people look for a way to stream Crunchyroll on Discord is a black screen. Such a screen can be visible in place of the show in the video player.

However, it is not an issue anymore because disabling hardware acceleration can help out. Even updating Discord can work well if the issue is with Discord. Here, we conclude our article.