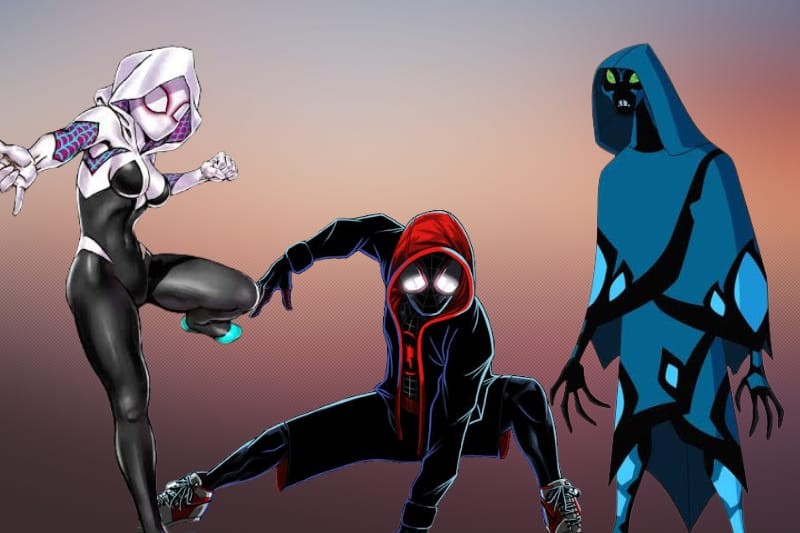 Cartoon characters are also so popular and look attractive, just like anime characters. However, they were so difficult to find due to their lower popularity compared to anime series. But don’t worry, we will provide you with some of the best cartoon characters with hoodies.

Each of them is extremely popular and has left an everlasting mark on the hearts of fans with their beautiful hoodies and excellent character development. Some of them are extremely popular owing to their roles in the most popular animated series, such as the DC Universe and Marvel Universe.

So, without further ado, let’s dive into this wonderful list of the 10 best cartoon characters with hoodies.

Anime: Spider-Man: Into the Spider-Verse

Miles is a high school student with a typical high school body and dark skin. He wears many Spider-Man dresses during the film, but his hoodie with his Spider-Man suit is the most popular Spider-Man costume. As a result, he became one of the coolest cartoon characters with hoodies.

Anime: Spider-Man: Into the Spider-Verse

Spider-Gwen, also known as Ghost-Spider, is the supporting protagonist of the 2018 Marvel animated film Spider-Man: Into the Spider-Verse. She is also the first Spider-Woman in the Spider-Man animated franchise.

Gwen is also a high schooler who studies along with Miles Morales at the same school. She has fair skin and an aesthetic haircut that perfectly suits her alpha female personality. She wears a unique and very fancy white Spiderman costume that has a cool hoodie.

Batman is an American superhero that appears in the DC animated universe and other DC media. He is the superhero identity of Bruce Wayne, who is a very rich person in Gotham City.

His Batsuit is made out of a gray or black bodysuit with a stylized black bat on the chest, sometimes with or without a yellow ellipse surrounding it. In addition, he is also wearing a cowl that works as a black hoodie to cover the upper half of his face.

Big Chill is one of the most popular aliens in the Ben 10 franchise. He is a Necrofriggian from the planet Kylmyys, whose DNA was collected by Azmuth for the Omnitrix.

Big Chill is an alien who can fly thanks to his four long wings. He usually covers his body with his wings, which look like a blue hoodie. He is also capable of being invisible and can easily pass through any solid matter.

Anime: The Witcher: Nightmare of the Wolf

Vesemir is one of the strongest witchers in The Witcher: Nightmare of the Wolf cartoon series. In his younger days, he was a tall, well-built young man who wore a wonderful hoodie.

Vesemir is also the mentor of Geralt of Rivia, and he gave him all the intense training that is necessary to become a witcher. As being the witcher and wearing a wonderful hoodie, he is considered one of the strongest cartoon characters with hoodies.

Finn is the main character in the Adventure Time cartoon series. He is a teenage boy and has very simple facial features.

Finn mostly wears a t-shirt and jeans alongside his two ear hat that seems like a hoodie. Throughout the series, he wields several powerful swords and a crossbow.

Most of the time, he acts overly expressive; however, he always helps weak people. Aside from his simple look, he is quite powerful, both physically and mentally.

Anime: The Grim Adventures of Billy and Mandy

Grim Reaper is one of the lead characters in The Grim Adventures of Billy and Mandy. He resembles a skeletal man and wears a long black hoodie.

Grim is the soul reaper and loves to reap people’s lives. In order to take people’s lives, he used his long and sharp scythe. Even though he is a soul reaper, he is quite a comical individual and did plenty of illogical activities alongside his friend Billy.

Tetrax Shard is the native citizen of Petropia, the homeworld of Diamondhead. He looks similar to Ben’s diamondhead, but he wears a gray battle suit. However, he also sometimes wears a black hoodie that looks so cool on him.

Tetrax was initially a cold-hearted person and does not care about anyone. After witnessing the destruction of his home planet, he became a good person and began to work for whole celestial bodies. As the diamondhead, he shoots diamonds from his head and can use his power to a greater extent than Ben’s diamondhead.

Green Arrow is one of the most popular superheroes in the DC Animated Universe. He is also one of the more significant members of the Justice League and takes part in their various missions.

Green Arrow is a tall and muscular man who always wears a green hoodie as his superhero costume. He is a highly skilled archer and possesses extraordinary marksmanship skills.

Due to being a popular superhero and wearing a hoodie, he is regarded as one of the most popular cartoon characters with hoodies.

Raven is one of the main characters in the Teen Titans Go! cartoon series. She is a short-heeled teenage girl and possesses an enormous amount of demonic powers. She is always wearing a purple hoodie that covers almost all parts of her body.

Raven mostly remains quiet and does not express her views on any unnecessary topics. However, she has excellent observing skills and a calculative mind that allow her to help her team to the fullest. Her most significant powers are telekinesis and teleportation, which make her one of the strongest characters in the series.

We’ll wrap up this article by discussing every cartoon character on the list who wears a hoodie. This fantastic list was compiled based on their popularity and beautiful hoodies. Each of them was quite popular and wore some of the most beautiful hoodies.