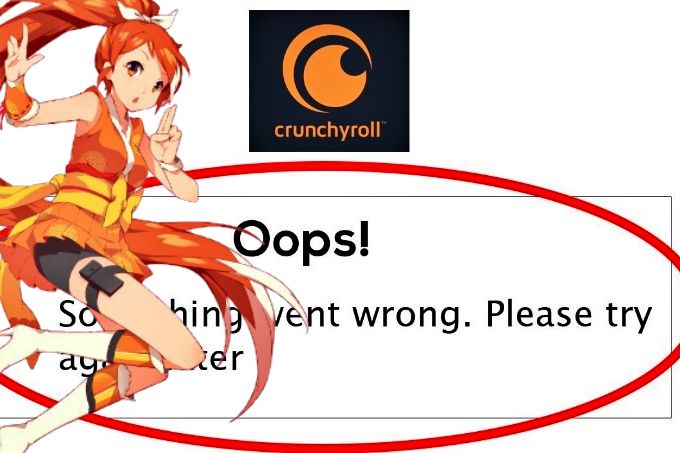 Crunchyroll is an on-demand subscription service that is based on American Anime Video streaming. More than 30,000 anime episodes are being served by it. Over the years, Crunchyroll has been an astonishing distributor of amazing anime content streaming to its users.

Crunchyroll has gained popularity so fast due to its famous content and easy subscriptions. Even after serving the best quality services, the users sometimes face issues with the working of the service on the devices. Usually, Crunchyroll oops something went wrong, appears on PC and mobile.

Why I am getting Crunchyroll Oops something went wrong error on PC and mobile?

Whenever there is an issue along Crunchyroll, there is some usual and possible reason behind the occurrence. Thus, the streaming service might appear as an error message for a massive group of users. The reason for Crunchyroll errors can be:

How to fix Crunchyroll oops something went wrong?

The cache files are being stored as readily and locally on the PC and mobile. This is done for the easier accessibility of the standard folders and files. However, such files comprise broken or corrupt codes that serve the users along with malfunctioned outcomes. Thus, the servers failed to be get connected.

One of the easiest and finest ways is to get the issue solved by deleting the temporary data and then restarting Crunchyroll.

Crunchyroll might show such an error due to the antivirus presence. It is the one who may be blocking the website due to which users are going to get oops something went wrong.

To get access over the browser in the mode of incognito, just press CTRL+Shift+N through the keyboard. This is the best way for entering the incognito mode quickly and then anonymously browsing the website.

For running any application, there is a requirement for a stable internet connection. For streaming all-time favorite anime on Crunchyroll, there is a need to have a minimum 3Mbps internet speed.

In the internet router, any error is a must to be get checked. Help can be taken from a simple power cycle of the router.

Most of the users who experience such error issues suggest that re-logging from the service fixes this issue. Such a solution will apply to the user regardless of whether this problem is faced on the Crunchyroll website or application. For re-logging Crunchyroll, follow the below steps:

Extensions can be the most significant cause, due to which Crunchyroll is prevented from opening in the browser. Suppose someone is accessing a third-party browser extension such as VPN, UBlock, Data Scrapper, Adblocker, etc.

In such cases, it is recommended the users for disabling the extensions temporarily. Then notice if the error issue is getting solved or not.

An error might occur because of an overfilled watch queue and generates a bunch of caches. With the more generating of cache on Crunchyroll, there are chances of the service kicking the user out and crashing.

Clear from the app:

Clear from the browser:

Crunchyroll has become the parcel and part of most anime fans. Encountering Crunchyroll, oops something went wrong, can give some stress. A such message should not discourage one from watching anime. However, an occasional message is acceptable as there are quality anime available on Crunchyroll.

There is no need to worry as with the above fixes it is quite simple to cope with it. In case, the above-mentioned methods failed to serve the desired outcomes then it is better to wait for some time. Because there can be any technical error chiefly generated from the headquarters.