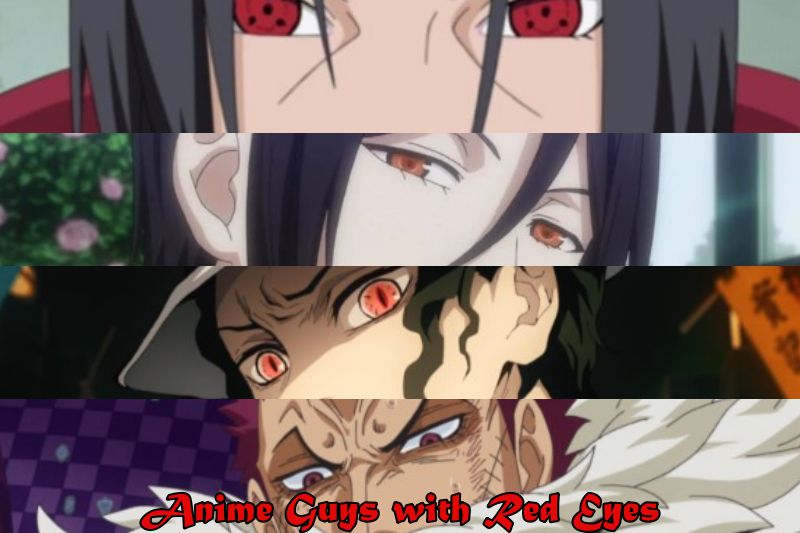 Red eyes might be an unnatural phenomenon in the real world, but in anime, it’s often the sign of a badass character. There are plenty of anime guys with red eyes out there who are not only immensely popular but also cut a very handsome profile.

We’ve listed 15 such hottest anime guys with red eyes. But before getting into the list, it should be mentioned that we’ve only one male character from one anime to include in the list to provide more variety, and the characters are listed in no particular order. So, without further ado, let’s get into it, then. 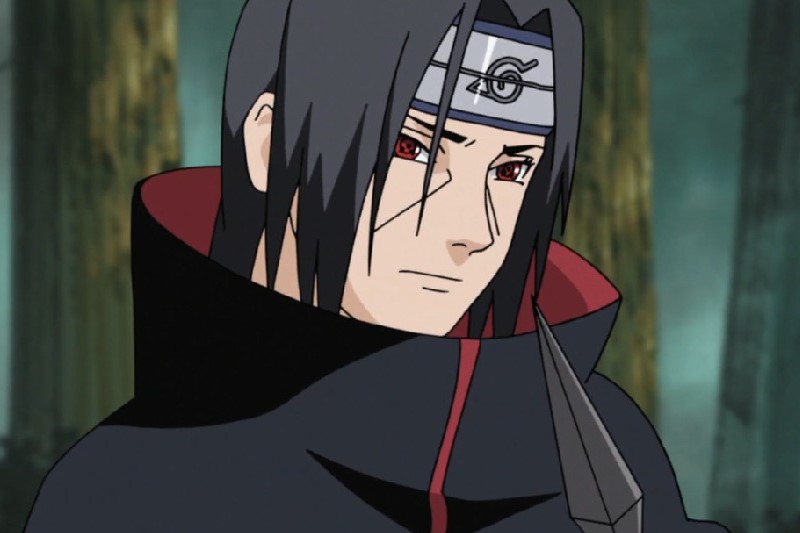 Itachi Uchiha is one of the most popular characters in not only Naruto but in the whole anime world. Calm and deadly, the man is the older brother of Sasuke, who slaughtered his entire clan in one night. Don’t him too much, though; you’re going to regret it.

Itachi’s natural eyes are black, but in the majority of his appearance in the series, he’s found with his Sharingan activated, tinging his red eyes. Itachi’s deadly Sharingan eyes are as iconic as the character himself. 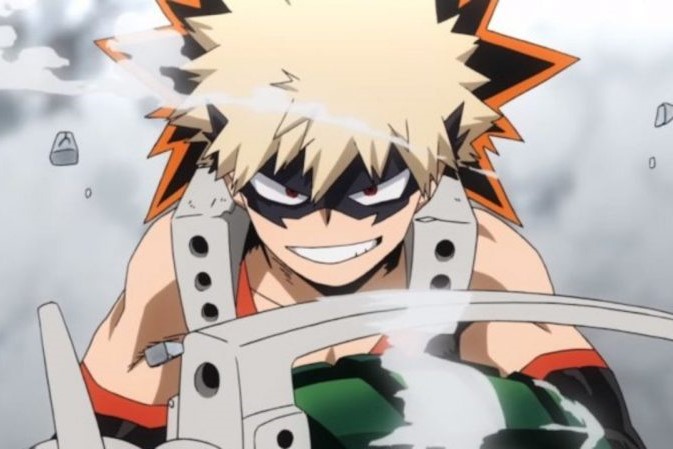 Katsuki Bakugou is a student of Class 1-A in the U.A. High School and an aspiring hero, as well as the childhood friend of the protagonist, Izuku Midoriya.

Bakugou’s introduction in the series reveals his pride and bullying nature, but with time and experience, he’s able to understand his own strengths and weaknesses and become a better person.

Like many characters in My Hero Academia, Bakugou has red eyes. He seems to have inherited the eye color from his mother. Even with his perpetual grimace, Bakugou is a handsome young man. 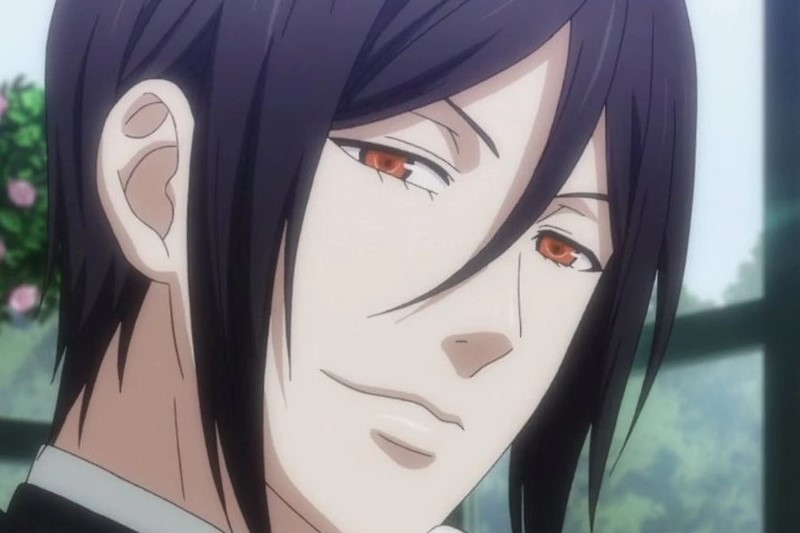 Sebastian Michaelis is a demon who makes a pact with a vengeful Ciel Phantomhive, agreeing to help him in his revenge in exchange for his soul. From then on, Sebastian acts as a butler to the boy in public, all the while bidding his sinister orders in the shadows.

Sebastian’s red eyes are an indicator of his true nature as a demon. Paired with his slick, seductive smile, the red eyes make Sebastian one of the hottest anime guys. 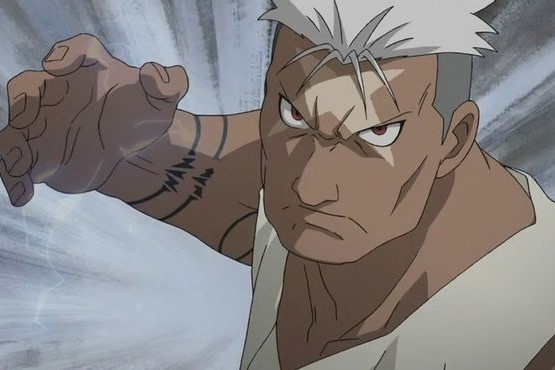 Scar is a man hellbent on revenge after the whole Ishvalan race was killed in a war by the Amestris military, losing his kinsmen and his beloved brother. That changed Scar into a man who only lived and breathed to bring his people to justice.

Scar’s eyes are red as every Ishvalan. His eyes, as well as his white hair and dark skin, are a reminder of his identity and what he lost by the sinister plans of the Homunculus. 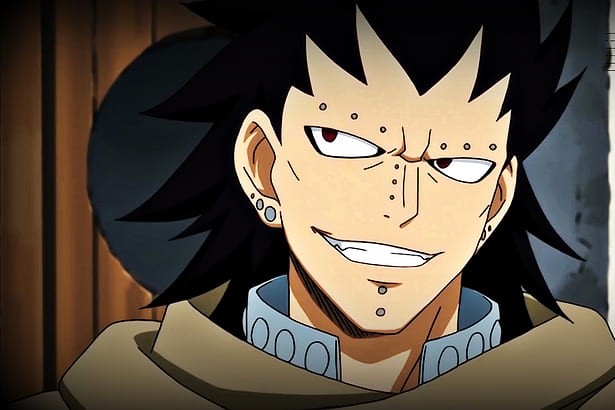 Gajeel Redfox is the Iron Dragon Slayer who was previously a Mage of the Phantom Lord guild before joining Fairy Tail. After joining Fairy Tail, he becomes friends with Levy McGarden, the woman he brutalized, and eventually falls in love with her. He has an Exceed partner called Panther Lily.

Gajeel has red eyes as well as multiple piercings on his face and ears. These features give him the edge in addition to making him a very attractive character. His hair, however, could’ve suffered through a nice cut. 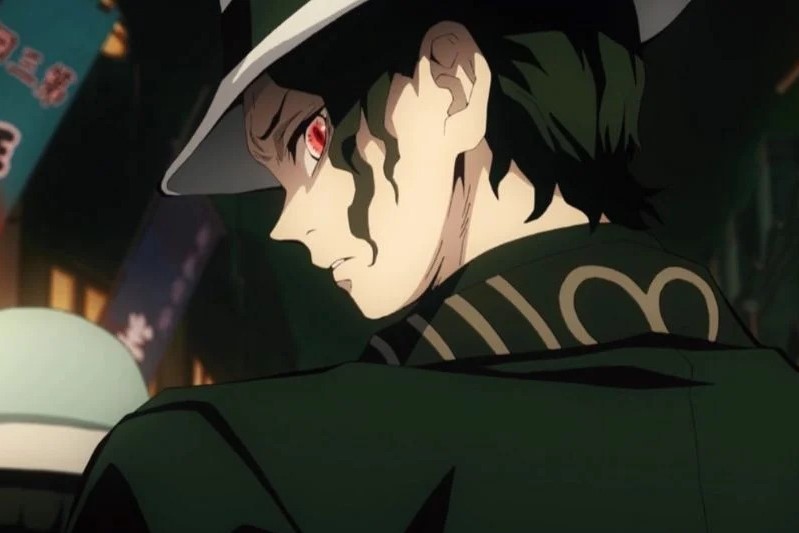 Muzan Kibutsuji is the original demon of the Demon Slayer series who has been turning humans into demons and wreaking mayhem in the world for centuries. He’s also the one who killed Tanjiro’s whole family and turned his sister, Nezuko, into a demon.

Muzan’s sinister red eyes are befitting of his evil nature. His red eyes only ever reflect rage and disgust, and in the face of Yoriichi Tsukiguni, fear. But that doesn’t make him any less handsome. 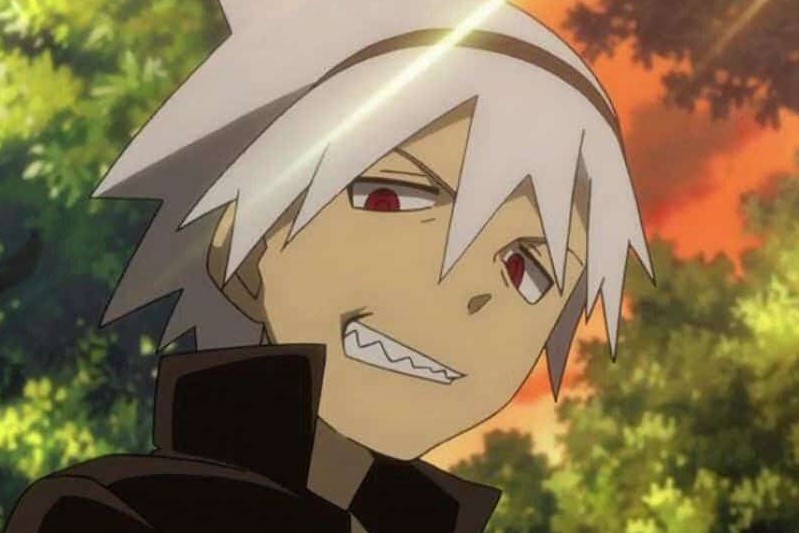 Soul is a demon weapon that turns into a demon scythe and is partnered with scythe-meister Maka Albarn after enrolling in the Death Weapon Meister Academy. Soul later becomes a death scythe after claiming Arachne Gorgon’s soul. 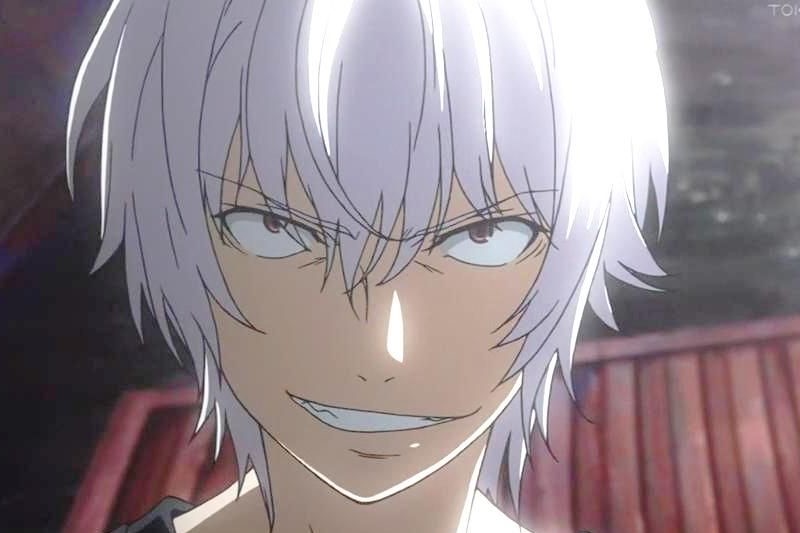 Accelerator is the 1st ranked Level 5 esper, i.e., the strongest esper in the Academy City. An immensely powerful guy, Accelerator struggled to connect with his peers through his childhood and was later experimented on to create the first Level 6 esper. With his power, his personality also twisted into something dark over time.

Accelerator is a skinny teenager who has ruffled white hair and red eyes. He might make fearsome expressions in battle, but there’s no denying the good looks he’s been gifted with. 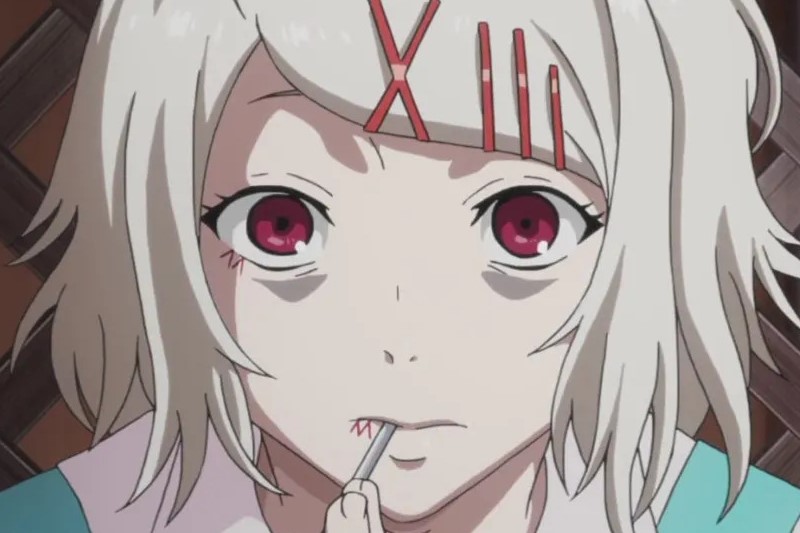 Juuzou Suzuya is a Special Class Ghoul Investigator and is currently the leader of the Suzuya Squad. The young man is a broken soul who was tortured brutally by a Ghoul named Big Madam, leading to him showing psychopathic tendencies.

Suzuya is a very beautiful character with an androgynous appearance. His hair color changes from white to dark in Tokyo Ghoul: Re but his big red eyes and the stitches on his face remain the same. 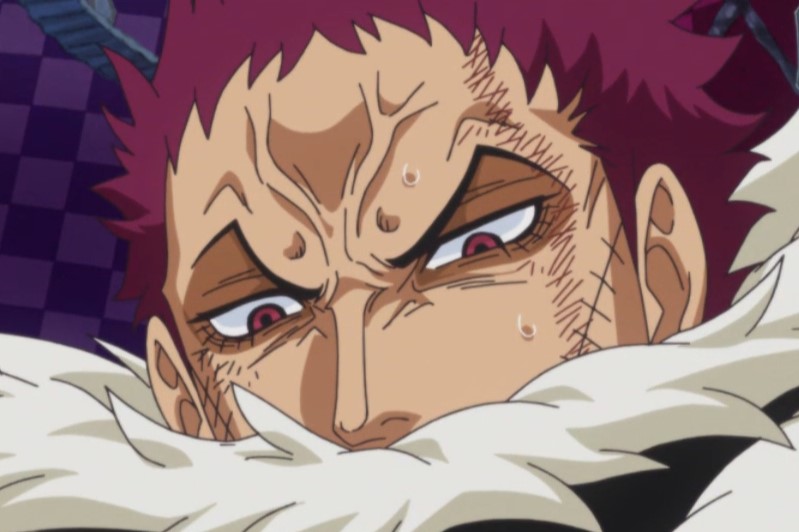 Charlotte Katakuri is the third child of Big Mom and the strongest man in Big Mom Pirates after his mother. He acted as a major adversary to Sanji Rescue Team and provided Luffy with one of the most challenging fights of his life.

With red eyes and a superbly cool costume, Katakuri’s character design is one of the very best in One Piece’s huge set of cast. The man’s look, coupled with his personality, is so cool that it’s impossible to dislike him. 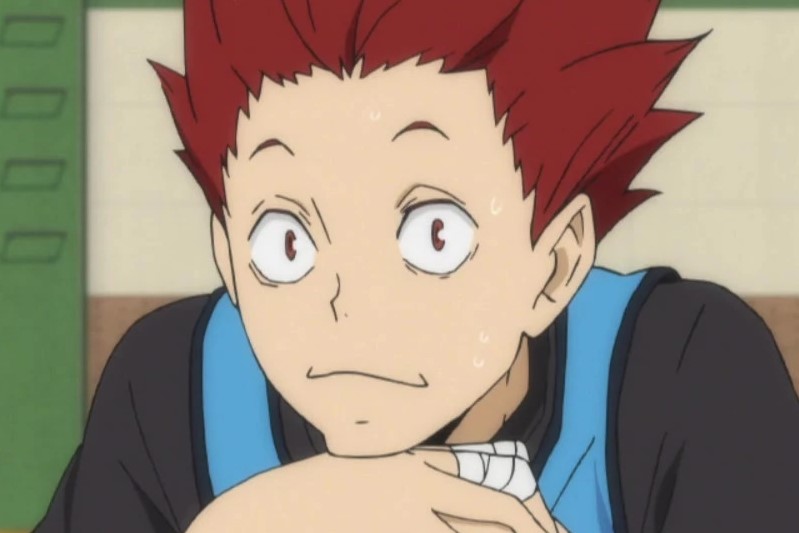 Satori Tendo is one of the middle blockers of the Shiratorizawa Academy Volleyball Team. Like most of the players in the team, Tendo is very good at what he does and poses a serious threat to the Karasuno team during their match against Shiratorizawa. Because of his guess blocking, he’s nicknamed Guess Monster by his peers.

Tendo’s red eyes, spiky red hair, and eerie smile might be off-putting in certain scenes. But when he smiles, it’s very evident that he’s a very handsome young man. His cheerful personality and his odd but endearing friendship with Wakatoshi Ushijima also make him a very likable character. 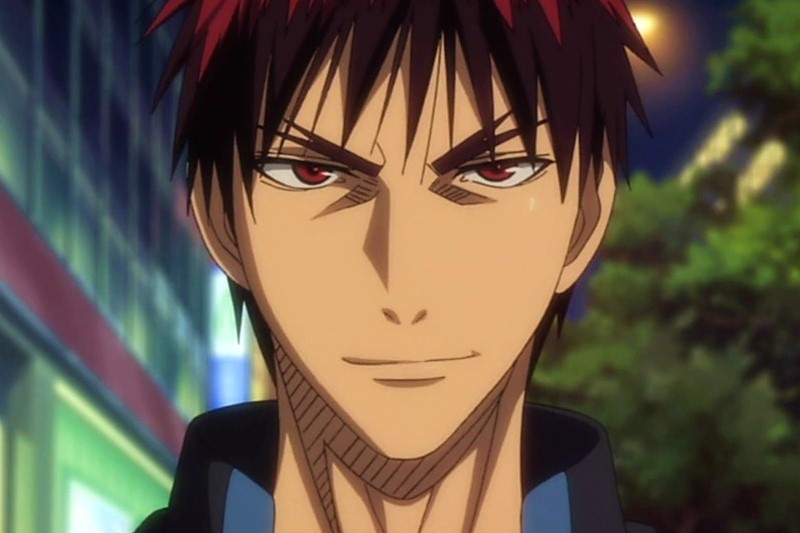 Taiga Kagami is the ace and power forward of the Seirin High basketball team. He also acts as the light to Tetsuya Kuroko’s shadow. Gifted with exceptional skills in basketball, Kagami’s dream is to defeat the Generation of Miracles and become the best player in Japan.

With red eyes and reddish brown hair, Kagami is a very tall guy with an athletic physique. His tanned skin and muscular structure make him a very handsome character. With both looks and talent worth envying, Kagami has it all in perfect portions. 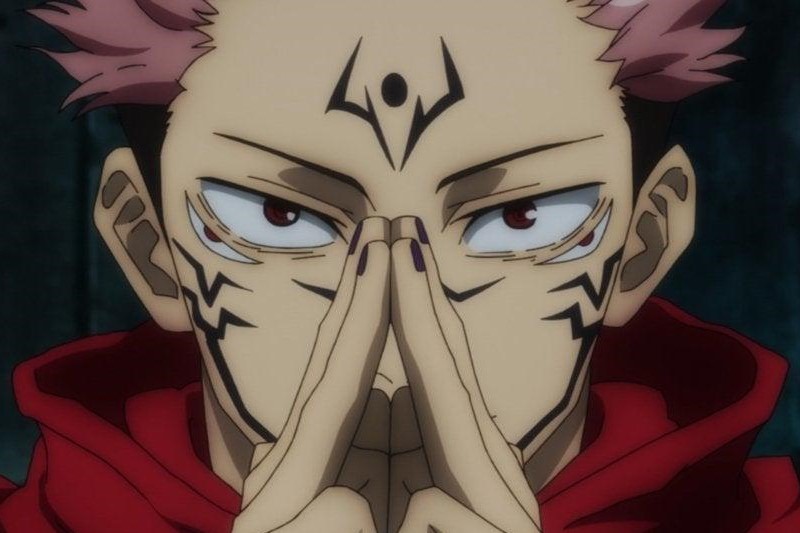 Sukuna is the most powerful cursed spirit known as the King of Curses. His being is divided into twenty indestructible and very powerful fingers, one of which Yuji Itadori consumed. As a result, Sukuna is currently incarcerated inside Itadori.

Sukuna’s actual body is shown to be demon-like, with four arms and two faces. But mostly, he appears as his host, Itadori, in the series, with the only differences between them being Sukuna’s red eyes and markings on the face as well as the second pair of eyes under his normal ones. 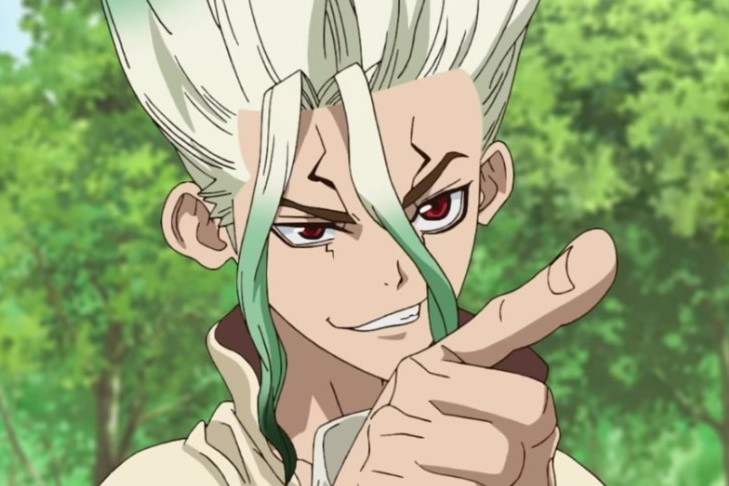 Senku Ishigami is a young and brilliant scientist who has been left petrified for 3700 years after a mysterious flash turned every human life on Earth into stone. After getting de-petrified, Senku, with the help of his friends, advanced science and technology in the stone age.

Senku’s white hair with green roots and his red eyes makes him an interesting character to look at. He also has two symmetrical cracks on his face after staying as a stone for so many years. 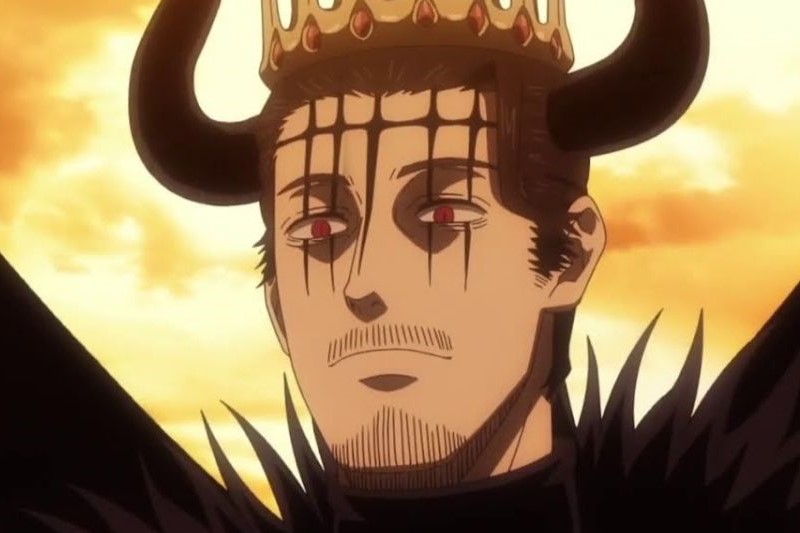 Dante Zogratis is a resident of the Spade Kingdom and of their Dark Triad. He’s also the host of the devil Lucifero. Dante is a master of Body Magic and Gravity Magic, and his sword skills are on par with that of the Black Bull’s captain, Yami Sukehiro.

Dante is a handsome man with dark hair and black linings on his forehead. His eyes, however, change color from green to red, and his pupils turn into slits while using 50% of his devil’s powers. He also gains a hair of horns and bat wings with them.

Red eyes are often a very common characteristic of a cool and attractive character. Some of the characters in this list are good, while some are evil. But all of them are handsome in their own right. In our list of the 15 hottest anime guys with red eyes, we’ve noted the most attractive ones in our opinion.