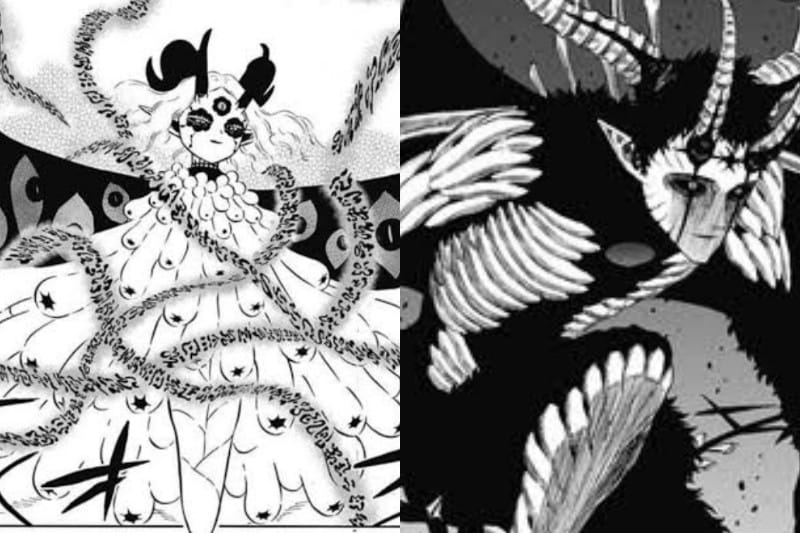 This article is updated based on current manga chapter.

The Black Clover series has shown the involvement of the devil from the beginning. Even the series began with the intense battle between the First Wizard King and the Demon Licht. And now, every known magic knight is engaging in the action to oppose the devils coming into the human world.

In the past, the Dark Triad unveiled that there is another world where the devil resides. This world is known as the Underworld. Many powerful devils in the past were the origin of this world. The main objective of the devils is to combine both the Human World and the Underworld. For this, they have captured William Vangeance and Yami.

Till now, we have learned and witnessed many devils of the Underworld. Therefore, in this post, we will discuss the ranks of the strongest devils according to their abilities. Just like in the Clover Kingdom, the status is also given in the Underworld. The high-ranking devils are the most powerful ones in comparison to the low rankings. So, without any further delay, let’s begin thee ranking of Top 10+ Strongest Devils in Black Clover based on manga.

Low Ranking Devils are the lowest-ranked creatures in the Underworld. The army of these devils was the one who attacked the remnants of the Spade Kingdom. However, Fueogoleon, Luck, and the remnants successfully eliminate them. Known low ranked devils are Liebe, Gimodelo, Slotos, Plumede, and Walgner.

Nacht’s devils are Gimodelo, Slotos, Plumede, and Walgner. These are the low-ranked devils. Nacht bound them in a ritual. Alone they are not powerful, but in combination with Nacht’s Shadow Magic, they can provide multiple forms which even help to fight against the High-rank devils.

Liebe is also a low-ranked and first devil who entered the human world due to his magic. His magic is Anti-Magic, which grants him the ability to cut any magic. Alone he is not powerful enough, but after forming Union with Asta, they become the strongest character in the Black Clover series.

Demons are giant devils and the strongest among all. In the first episode of the series, we witnessed Licht transform himself into an ancient devil by absorbing the negative energy from the Underworld. Demons are powerful than the low and mid-ranked devils; however, it is difficult to compare them with high-ranked demons. The series showed another two ancient demons in the Spade Kingdom arc, one of them was defeated by Asta, and the other was eliminated by Mereoleona. 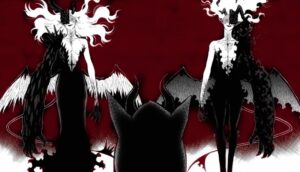 Lilith & Nahamah are the two high-rank devils who appeared from the first level of the Underworld. On one side, Lilith used Ice demon magic, whereas Nahamah used Fire demon magic. They both were powerful enough to defeat Nacht & Jack. They could even combine with each other to merge their magic attributes. However, they were defeated by Asta and Liebe.

The series hasn’t unveiled Lucifugus’ power or abilities till now. He is one of the highest-ranking devils. He first appeared in the House Faust, where he took the lives of Morgan and all the bystanders.

Another highest-ranking devil was Beelzebub. He was Zenon’s demon and had Spatial magic, which grants him to manipulate space. Like Lucifero and Megicula, he was also one of the Dark Triad members. Zenon made a deal with Beelzebub giving his body and soul in exchange for the devil’s heart. Yuno had to use two different magic in Sage Spirit to defeat Zenon in the end.

Zagred was also the highest-ranking devil. He was the first devil who appeared in the human world and caused a battle between humans and elves. His magic was Kotodama Magic or Word Magic which allowed him to change the physical and magical attributes of his surroundings through his speech. In the end, all magic knight captains, first wizard king, elves, Licht, and other magic knights fought and defeated him.

Megicula was one of the strongest devils of the Underworld. She was also responsible for Acier’s death. Her Curse-Warding Magic magic allowed her to create powerful curses which could even heal or take the life of anyone. Many magic knights fought along with the Water spirit, Undine, to overpower her.

Lucifero is the strongest known devil in Black Clover, who is still alive. Presently he combined all the demons of the Underworld to form a colossal devil with Gravity magic. The black bulls have combined their magic to fight with him. Even Nacht recognized him as the most powerful devil of the Underworld.

Here, we conclude the list of Top 10+ Strongest Devils in Black Clover till now. We will update this post as per the story in the future. Till then, stay tuned with us and read the articles below.

Q1. Who is the strongest devil in Black Clover?

Ans. Lucifero is the strongest devil in Black Clover.

Q2. Who is the strongest demon in Black Clover?

Ans. Lucifero, the King of devils, is the strongest demon in Black Clover.