Skip to contentHome » Anime & Manga » One Punch Man » Goku vs. Saitama: Who will win in one on one battle 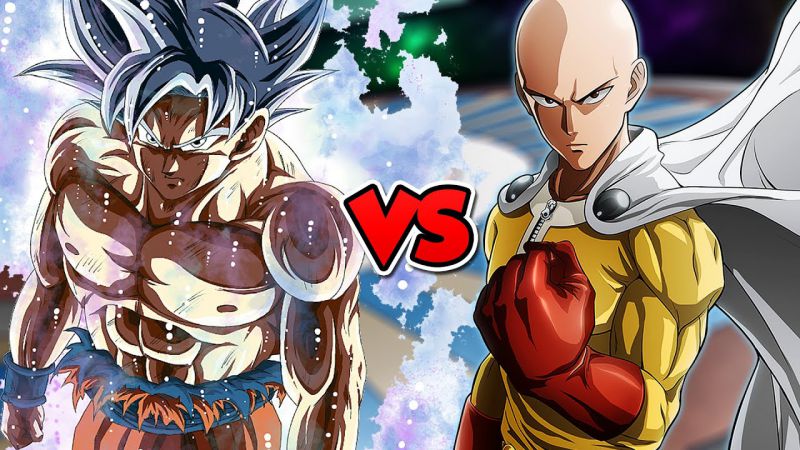 Goku and Saitama are two characters of the Dragon Ball series and the One Punch Man series respectively. Dragon Ball is a Japanese manga series written and illustrated by Akira Toriyama. It was serialized in Weekly Shonen Jump from 1984 to 1995. The story follows the adventure of Son Goku as he explores the world in search of Dragon Balls. One-Punch Man is a Japanese superhero franchise created by the artist One. It tells the story of Saitama, a superhero who can defeat any opponent with a single punch.

Goku is the main protagonist of the Dragon Ball series. He was a Saiyan originally sent to destroy the earth. But he suffered a head injury later which altered his memory and rid him of his initial self-destructive nature. He later grew up to become one of the greatest defenders of Earth. He is always training and looking for ways to save the earth and the universe from destruction.

Likewise, Saitama is the main protagonist of the One Punch Man series and the most powerful character to exist in that particular series. He is a professional hero for the Hero Association and defends his home Z-City from monsters, villains, and other threats. He has been assigned the hero name of Caped Baldy.

Goku is one of the most powerful characters in the multiverse of Dragon Ball. He is a prodigy of combat and could drag large rocks tied to him as an infant. He would continue to effortlessly learn any new technique he encountered. His natural talent for battle took his power to insane levels. He was able to master the various stages of Super Saiyan. He was also able to reach the point of rivaling the domain of the Gods of Destruction.

Saitama on the other hand seems to possess limitless physical strength and is capable of defeating enemies with a single nonchalant punch without any single effort. His punch is so powerful that many enemies simply explode when struck. One instance of this is when Saitama stopped Sonic’s sword with his teeth and effortlessly shattered the blade with his jaw. Thus, Saitama would be easily able to overpower Goku’s highest Super Saiyan level with just the insane strength of his punch.

Goku possesses Superhuman Speed. In many instances, we have seen just how fast Goku can fight against his opponents by attacking them and simultaneously dodging them at the same time. He could also react as fast as Beerus who himself was capable of moving faster than light and flying at hypersonic speeds.

Meanwhile, Saitama also possesses unparalleled speed and reflexes which may even be more than Goku. Saitama was able to complete his 1500 meter dash in a flash during the hero tryouts. He was also able to effortlessly keep up with Speed-o-Sound Sonic who could move above hypersonic speeds. His speed is so insane that he can return to the earth from the moon in just a couple of seconds. Thus, Saitama manages to beat Goku in this aspect too.

Goku has got a wide range of techniques to help him in his battle. He can fly by the manipulation of Ki. He is also able to sense the energy of other beings by drinking the Ultra Divine Water. He can transfer his own Ki to a wounded person to help them. He can also use it to increase his power drastically and access god-level transformations such as Super Saiyan God and the Super Saiyan Blue.

Meanwhile, Saitama also possesses a variety of techniques. His inability to fly is compensated by his immense leg strength and allows him to leap to tremendous heights. He can also generate shockwaves in this way. He has heightened senses which are far beyond the human norm. He also has enhanced lung capacity with vacuum adaptation. He has a variety of attacks in the form of punches. Thus, this is a tie between both of them with both having numerous techniques in their arsenal.

Must Read- All Doraemon Movies List with Watch Source

Goku’s body is far more durable than that of normal human beings. He is essentially invulnerable to all earth-made weapons. His endurance is so strong that he can even survive the universal force of energy. However, he has his limits and other powerful beings can potentially hurt and defeat him if he doesn’t defend himself properly.

On the other hand, Saitama is practically invulnerable. He can withstand blows from extremely powerful beings without suffering a single scratch or pain. This speaks a lot about him. He will remain completely unharmed regardless of the power of the attack thrown towards him. Thus, Saitama easily wins on this aspect over Goku.

Goku has defeated many powerful enemies till now. He was able to defeat the likes of Super Hearts with his Super Saiyan Blue form and proceeded to land blows that rattled him. He ultimately used his Kamehameha to finish him off. His Ultra Instinct Sign form also helped him to deal with powerful opponents in the tournament of power including Jiren.

Likewise, Saitama has also defeated insanely strong enemies. However, unlike Goku, he didn’t have to break a sweat to do so. He was able to use his serious punch to completely negate Boros’s beam that was capable of wiping out an entire planet. He has also used his Serious Table Flip to defeat Awakened Garou with ease.

Goku can attain the Ultra Instinct Sign which is the most powerful form used by Goku, to date. He achieves this state by breaking his self-limiting shells and tapping into the deeper potential within. Its greatest advantage is that it grants Goku the Autonomous Ultra Instinct ability which allows them an automatic and instantaneous reaction to any threat. It was even recognized by Beerus to be superior to him in power.

Saitama’s only power is that his body is far beyond human limits. This allows him to achieve astounding physical feats. His strength is so great that it even surpasses artificial beings. While his power is limited to heightened human traits, his superhuman capabilities more than compensate for his lack of variety in powers.

Goku vs. Saitama: Who will win?

In our opinion,  Saitama holds a slight edge over Goku, however, it is not confirmed still yet that he will be able to defeat him in a one-on-one fight. This no way puts Goku down as a weak character. It just speaks volumes about Saitama as a superhuman and his invulnerability. Saitama doesn’t possess flashy moves or cool names. He is a simple guy with simple attacks whose power extends far beyond imagination.

However, the fight will not be one-sided in anyways. Goku is a guy who never gives up and can match up to Saitama with his Autonomous Ultra Instinct ability. It might also help him to dodge Saitama’s punch and land a blow somehow. Both of them possess insane speed and reflexes so the battle might not even be visible to other people. In our opinion, Saitama has the upper hand against Goku because Saitama has managed to defeat insanely powerful characters effortlessly and is practically invulnerable. So, who do you think will win, if Saitama uses his Serious punch and Ultra Instinct Goku uses Kamehameha straight on?

Must Read: What is Threat Level in One Punch Man

Although in the present scenario Goku can’t possibly defeat Saitama, we can’t strike off the notion that he will not be able to do so in the future. We have seen numerous times how Goku has overcome adversaries with rigorous training and made a great comeback. So it is likely that he may reach a new stage of Super Saiyan and Ultra Instinct and manage to defeat Saitama. Both of Dragon Ball and One Punch Man series can be read in Viz media.