Skip to contentHome » Anime & Manga » How Strong is Enel in One Piece? (Power Level) 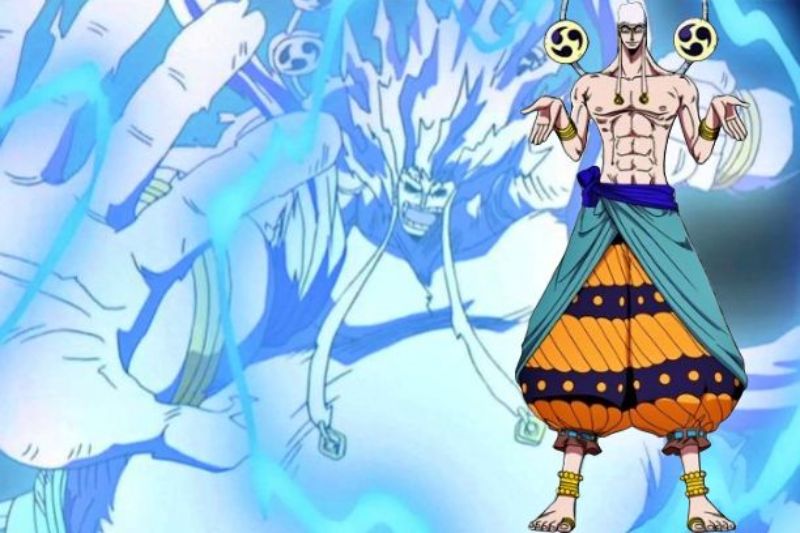 Some of these characters have stayed as an adversary for the future, while other strong guys have been discarded as past villains. One such character is Enel. So, now the question arises: exactly how strong is Enel?

Enel is one of the strongest characters introduced in the One Piece series. Not only he has the power of a strong devil fruit, i.e., Goro Goro no Mi, but also his Observation Haki is on the other level.

He can heed conversations about himself from a very far distance; on Skypiea, they refer to it as “mantra.” His lightning ability is devastating, and with a known maximum output of 200 million volts, Enel can effortlessly eradicate most of his opponents.

The only way to survive is to oppose it with strong/advanced Armament Haki. In addition, his fruit grants him the lighting speed ability. With this speed, tremendous offensive attack, and advanced Observation Haki, there is no doubt that Enel is on Admiral level or even more.

In this article, we’ll talk about how strong Enel is and how his powers compare to the powers of the current Luffy. So, without further ado, let’s begin.

Who is Enel in One Piece?

Enel appears in the Skypiea Arc of One Piece and acts as the primary antagonist of the arc. An amazingly strong character, Enel possessed a mighty Logia-type Devil Fruit, Goro Goro no Mi, that would be a real trouble to deal with in a battle.

Too bad for Enel, his opponent turned out to be his natural enemy. Faced with rubber man Luffy, he couldn’t hold on to his “godship.” But that’s not to say that Enel wasn’t strong enough.

In fact, he was more substantial than Luffy in every aspect but the pirate won by the sheer luck of being naturally resistant to Enel’s power.

But now, with Luffy’s mighty powers finally revealed, it seems like a good time to revisit the past days of Luffy and the Straw Hats’ adventure and take a good look at Enel’s power.

Enel’s Devil Fruit is so strong that it is almost overpowered. Given that his opponent is anyone other than Luffy, a fight with Enel would take a lot of sweat to win.

Aside from Shanks, Enel is one of the first characters in One Piece to hint at the powers of Haki. While with Shanks, we get a very brief glimpse of the Haoshoku Haki; Enel and his priests are the first to exhibit Kenbunshoku Haki.

Though they do not know what this power is actually called, they make rather good use of it anyway. Enel and his followers call this power “mantra.”

Considering that Enel never got proper training at Haki as Luffy and others did, he was exceptionally good at using it at an average level.

After witnessing advanced Kenbunshoku from characters like Katakuri, Enel’s mantra might not seem much, but we have to remember that he was introduced very early in the series when the concept of Haki was barely developed.

With the mantra, Enel can read all of his opponent’s movements and act accordingly. By channeling the powers of Goro Goro no Mi, he picks on electromagnetic waves in the air that let him hear everything happening around him from a vast distance apart. This power covers a whole island like Skypiea, which is no small feat.

Enel always carries with him a golden staff which he can manipulate the shape of to form any weapon. The staff is called Nonosama Bo. He uses it to crush anyone he doesn’t seem worthy enough to be attacked by his lightning.

How Strong is Enel in One Piece?

Enel is on the Admiral level. Many fans have estimated that he may be even slightly stronger than the Admirals and First Commanders (Right Hands) of Yonko.

If we compare him with Kizaru (who has similarly-powered fruit), Enel has the upper hand in terms of offensive attacks and Kenbunshoku Haki, but Kizaru can surpass him with his speed Busoshoku Haki and experience.

However, in a one-on-one fight, no one will be the victor. It clearly displays that Enel is on the same level as Kizaru. In addition, only a few characters in the One Piece series can face off against his 200 million volts lighting attack.

In the Volume 43 Q&A session, Oda sensei answered a fan’s question about Enel’s power level. He estimated that if Enel were known on the Blue Sea, his bounty would easily reach 500 million Berry or even more.

That was the discussion of pre-time-skip. It means that based on the current saga, Enel’s bounty could have reached 1 billion+ Berry.

Moreover, presently, he is on the Moon, learning the origin of devil fruits and ancient robots from Lunarians. So with this knowledge, when he returns from Moon, it will be nearly impossible to stop him.

How Strong is Enel Compared to Luffy?

Enel’s defeat at the hands of Luffy at the end of the Skypiea Arc was thanks to the vast, rubbery plot armor. But that won’t be the case now. While it is very much possible, Enel has gotten stronger than his old god days of Skypiea.

Since he is conquering the Moon, gaining knowledge, and all that, he is simply no match to Luffy at the latter’s current power levels. Be it Haki or Devil Fruit powers, Luffy overpowers the Skypiea native in every aspect of strength.

Enel’s superspeed won’t be enough for Luffy since the pirate can use advanced Kenbunshoku and can see into the future.

Enel’s lightning will also be completely useless against Luffy as it was on Skypiea, even though we now know that Luffy never had the Gomu Gomu no Mi. Luffy’s true power, his Gear 5, gives him such a range of exceptional abilities that the lightning can’t affect him.

Enel may have been an incredible, strong character gone too early without ever showing his potential, but right now, it’s hard to imagine him as a serious opponent for Luffy.

But then again, with One Piece, we never know what is to happen. Like Lucci’s visit to Egghead Island, Enel might also get another chance to face off against his old nemesis again.

That’s all for today. Here’s our take on how strong is Enel in One Piece. If you’re a One Piece fan, you might want to take a look at our other articles on the series. Keep reading, and we’ll be back with another new exciting topic.