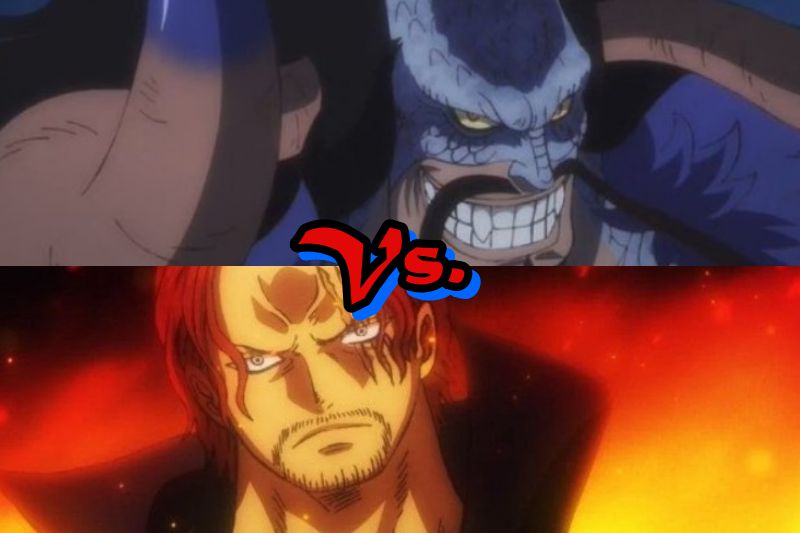 Kaido and Shanks are two of the “Four Emperors” (Yonko) of the sea who practically rule the New World. Both of them are extremely powerful and two of the strongest characters of the series. Now the question is: who is the stronger one between them? If there were a Kaido vs. Shanks one-on-one fight, who’d come out as the victor?

As for the captains, Shanks and Kaido would have an intense and extensive battle. But in the end, Kaido would win the Kaido vs. Shanks battle. His Devil Fruit, hybrid form, and physical strength would lead him to his victory against Shanks.

We know that Shanks is also very powerful. In One Piece Red movie, he defeated Kizaru in terms of speed. Kaido’s only weakness is against a swordsman, and Shanks is one of the strongest swordsmen in the One Piece world, but that doesn’t mean he can defeat Kaido.

Indeed, in one on one, both will be severely injured, but Kaido’s durability is on other another level. In our opinion, it is nearly impossible for anyone to defeat Prime Kaido in one on one fight. Even Luffy had to surpass Kaido in terms of strength to defeat him.

On the other hand, Shanks is the youngest of the Four Emperors, which means he’s able to go toe-on-toe with the other Emperors. Due to his little screen presence, the full extent of his powers is unknown. But judging by people’s reaction to him and his reputation alone, it’s safe to say that Shanks is no small fish.

But as powerful as Shanks is, he’ll have a tough time going against Kaido. It is true that Shanks stopped Kaido and his subordinate, King, from ambushing Whitebeard in the Marineford Arc.

He also remained unscathed after the encounter with Kaido. But it’s unknown if it was only Shanks or if he had the help of his crew. Though that still tells us that Shanks is one of the very few people to be capable of fighting Kaido on the same level.

Shanks’ crew, the Red-haired Pirates, also have a notorious reputation and are frequently considered to be one of the strongest crews in One Piece World. They show their worth in whatever little screen time they get. And they’d certainly have the upper hand if a fight breaks up between them and the Beast Pirates.

Now that the verdict is decided, let’s see how exactly are the powers and abilities of Kaido and Shanks and how they compare against each other in terms of powers.

Who is Kaido in One Piece?

Kaido is the Governor-General of the Beast Pirates and an Oni. He took over the Wano country with the aid of Kurozumi Orochi. Kaido served as the primary antagonist of the Wano Country Arc and was by far the strongest opponent Luffy faced. After several intense and lengthy battles, Luffy finally defeated the Emperor with his iconic Gear 5.

Who is Shanks in One Piece?

Shanks is the man who inspired Luffy to become the Pirate King and also the one to give Luffy his signature straw hat. Shanks also has a history with Gol D. Roger and sailed with Roger Pirates all his life as an apprentice until he chose to leave before the Pirate King’s final voyage to Laugh Tale. Roger gave the boy his straw hat, which was later passed down to Luffy.

Kaido vs. Shanks: Who Would Win?

Shanks has the most powerful Conqueror Haki, and in the recent chapters, we witnessed only his Haki blasts were enough to fear down an Admiral. So, it’s concluded that in terms of Haki, Shanks is the most powerful character but is that enough to overpower Kaido? The answer is no.

Kaido and Big Mom were the most powerful Yonko, and with their monstrous strength and durability, it was nearly impossible to defeat them in a one-on-one fight.

To defeat big Mom, Kid and Law had to awaken their fruit, work together, and overpower her with a perfect plan. On the other hand, to defeat Kaido, Luffy had to unlock Gear 5, where his raw strength surpassed even Kaido. So, in our opinion, it would be very difficult for Shanks to defeat Kaido (in his hybrid form).

Shanks possesses a remarkable amount of physical strength. Even after losing one of his arms, he was strong enough to not only wield his sword but also go toe-to-toe with Whitebeard’s attack. He was also once a rival of Mihawk, who had already proven himself superior to Zoro in terms of brute strength.

Kaido is an extremely strong man too. In fact, his physical strength is so grand that he can send people flying with just a swing of his arm. He’s also massively built, much bigger than Shanks.

And though in One Piece, bigger size always doesn’t mean greater strength, that is not true for Kaido. The Beast Pirates captain is so enormously strong that he sank nine huge prison ships all by himself. He was also able to counter the raw force of Luffy’s Gear 4.

So, it’s pretty clear that Kaido wins this round of Kaido vs. Shanks.

In the series, both Kaido and Shanks have shown to be very durable and to have a lot of endurance. Due to the limited appearances of Shanks in the series so far, it is not entirely clear actually how far Shanks’ durability goes.

But we get a glimpse of it when he doesn’t even react after having his arm bitten off by the Sea King while trying to save Luffy. Instead, he endured the pain and used Haoshoku Haki to scare off the creature.

On the other hand, we get a hint of Kaido’s durability even before he properly appears in the story in the Wano Country Arc. Kaido has repeatedly tried to kill himself but in vain and has survived each and every time.

That takes an astounding amount of durability and is the reason for him being dubbed as unable to die. He’s also been captured and tortured by the Marines several times.

He survived execution 40 times because every execution weapon broke his skin. Later, we see Kaido fighting one battle after another against powerful opponents without being tired.

Kaido’s durability easily surpasses that of our heroes and also Shanks’. So for this round also, Kaido is the winner for this round of Kaido vs. Shanks.

Shanks first showed his speed when he arrived at Marineford during the war between the Marines and Whitebeard Pirates. He was fast enough to intercept Akainu and stop his attack on Coby.

In the One Piece movie, One Piece Film Red, Shanks stands against both Kizaru, who moves at the speed of light, and Fujitora, as an adversary. Both understand that they can’t win against the Yonko. This implies that Shanks, if not completely but somehow, can match up with Kizaru’s speed. That’ll make Shanks one of the fastest characters of One Piece.

Kaido is also pretty fast on his feet. He moves extremely fast in battle, even if he’s drunk. A testament to his speed would be his ability to overpower Luffy, even with the latter’s advanced Kenbunshoku Haki. Kaido is also capable of striking Luffy with lightning, appearing behind him and hitting him again within an instant.

Though the proof of Kaido’s speed is clearer, there’s no denying the subtle implications of Shanks’ true speed. Given the reactions of people and Shanks’ own brand of mysterious power, Shanks might just beat Kaido in the speed round of Kaido vs. Shanks.

Shanks has very well-honed reflexes, as expected from a skilled fighter such as himself. But then again, his rare screen presence leaves a lot of questions. Though given that he was able to stop Akainu’s punch with his sword within a moment, it is easy to assume he has high reflexes.

Kaido has proven his reflexes again and again during his multiple fights with Onigashima. But as demonstrated in One Piece Red movie, one cannot see future sight against Shanks. So, here we think, Shanks would win this round against Kaido.

Shanks and Kaido both have plenty of abilities in their arsenals. Shanks is an extremely powerful Haoshoku Haki user. His Haoshoku is superior to Kaido’s, but Kaido has both his Haki and an extremely powerful Devil Fruit to counter the redhead pirate. Ultimately, Kaido would win this round of Kaido vs. Shanks.

We all know, who will have the advanced Haki. Shanks has become an Emperor only with the power of his overwhelming Haki. Even Whitebeard praised him for his monstrous aura. On the other hand, Kaido is also an expert of all three Haki but his Haki is not as powerful as Shanks.

Based on the discussion so far, it is clear that in a battle of Kaido vs. Shanks, Kaido will win but he will also severely injured. There is a high probability of draw in the fight too. However, it is to note that Shanks’ actual powers and capabilities are still pretty smoky. Thus the result of this may change once Shanks’ whole powers are revealed.

With this, we conclude the discussion of Kaido vs. Shanks and who will win in a one-on-one fight. If you liked this piece, don’t forget to check out our similar One Piece related and versus battles articles.