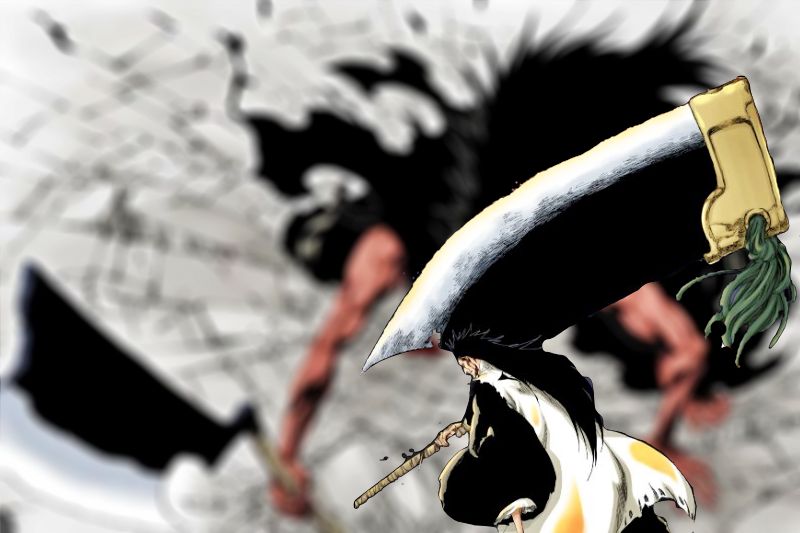 Kenpachi is one of the strongest captains of the Gotei 13 captains, who can cut through large meteorites in one blow and slash the toughest of opponents with one swift strike of his sword. Now a question arises, how strong is Kenpachi in the bleach universe?

Kenpachi is undoubtedly in the top 5 strongest captains and will be top 10 on a ranking of powerful characters from Bleach. Possessing a strong Shikai and an even stronger Bankai that even injured Kenpachi due to its raw power.

He changes into a bloodthirsty monster during fights, which surpasses all his pain and increases his durability in fights. Kenpachi’s power is shown on several occasions, which further proves how strong Kenpachi is in Bleach.

Later on in this post, we will take a look at how strong Kenpachi is in Bleach, along with his abilities and powers.

Who is Kenpachi Zaraki in Bleach?

Kenpachi Zaraki is the captain of the most powerful and hot-blooded soldiers division, the 11th division. Coincidentally, he was also the 11th individual to be named Kenpachi.

He is a monstrous entity with a thirst for battle and has an immense amount of Reiatsu. For most of the series, Kenpachi fought without a Shikai or a Bankai, but just his swordsmanship skills and Reiatsu control.

All of his squad members under his division look up to him with a lot of respect and trust in his decision-making skills. Kenpachi is the role model for his division’s lieutenants and soldiers, and every one of them goes through intense training in hopes of becoming as strong as his captain.

How Strong is Kenpachi in Bleach?

Kenpachi Zaraki is the strongest individual to be named Kenpachi in the history of Soul Society. He even overtook Unohana, the first Kenpachi and the strongest since the start of Gotei 13 Captains.

He has a muscular build and monstrous raw strength, which he relies on in battle, and ends up winning without using either his Shikai or Bankai. Zaraki also wears a special eyepatch on his left eye, which limits his enormous amount of Reiatsu.

Zaraki decides which opponent would be worthy of using his full power, and this is an attribute limited to strong people who are confident in their abilities.

He is one of the strongest captains and one of the most powerful individuals in Bleach. Zaraki defeated Gremmy by just using a fraction of power from his Shikai, defeating many powerful Espadas with his Reiatsu and Kendo.

Zaraki slashed through Gerard Valkyrie, in his enlarged size with his body, and shielded completely in one blow in his Bankai state. He was easily able to slice up meteorites that Gremmy created with just a single strike from his Shikai.

He was strong enough to get recognized by Yhwach, which made him place Zaraki on the list of 5 special war powers. Unohana herself accepts that Zaraki was stronger than the former when he was a child, in Reiatsu and raw strength.

Nozarashi is the name of Zaraki’s Zanpakuto, and he did not realize the name or the trigger command for activating his Shikai until his battle with Unohana, where he reigned supreme and he got the title of Kenpachi handed from the strongest Kenpachi.

Drink Nozarashi activates his Shikai form, and his blade grows into a long axe and cleaver shape that has immense destructive capabilities. It cuts meteorites into small pieces with just a strike and even can cut through space shown in his fight with Gremmy.

The attack power of his blade increases exponentially, and he can exert slashes with greater force and deal more damage to his foes. This is befitting Shikai to the slash-and-hack master Zaraki, which he relies on the most in any battle.

Adding in with the rough and unrefined yet powerful strikes from Zaraki, we get an unstoppable demon on the battlefield who can cut through anything like butter.

His Reiatsu will further amplify all the cuts, slashes, and any kind of attacks with the sword, which will further benefit the style of Kenpachi’s fighting ability.

Zaraki’s Bankai further increases all his base attributes of strength and power and breaks through the barriers he set upon himself. From even the activation command alone, it releases a huge wave of energy blast, powerful enough to send the radius of the blast to miles away.

Kenpachi turns into a charred red state and grows horns on his forehead in this state, which resembles a lot more like a demon, but he turns into a mindless berserker who slashes and cuts everything in his way.

His blade grows shorter than in his Shikai state, resembling more like a black cleaver this time. The cutting power of this blade is vastly enhanced, being able to slice up the monstrous entity of Gerard Valkyrie with his regenerative power and shield in one single strike.

Zaraki’s physical strength is also increased by a lot, stopping the attacks from the Sternritter by using his hands alone and lifting the Valkyrie with no effort. The cutting ability becomes so much better than Zaraki will be able to send powerful strikes from his Bankai from a distance.

His Bankai is too strong that his body cannot endure its power of it for so long and will get destroyed if he puts too much power into his strikes.

Is Kenpachi the Strongest Captain?

Yamamoto has been honing his abilities and power for more than a millennium and has maintained order throughout Soul Society for almost 1000 years. This is a feat that is not achieved by Zaraki, and he might not be able to beat the Squad 1 Captain anytime soon.

Kenpachi is yet to refine his fighting prowess and learn more powers to at least stand toe to toe with the Captain-Commander. Until then, Kenpachi will remain as one of the top 3 strongest captains in Bleach rather than taking the top position.

Is Kenpachi Stronger Than Ichigo?

This would be a hard battle to decide, as the latter had already defeated Kenpachi once in the past, but both of the characters have way stronger abilities and powers at the end of the series.

Ichigo can be stronger than Zaraki, but the latter is constantly evolving and should be at around Ichigo’s power level by the end of the series after realizing his Shikai and Bankai. Both of them have achieved great feats, respectively, but to gauge the true power of Ichigo, we never once witnessed his true Bankai.

It is safe to say that both of the characters will almost be on par with each other, on the same power level, after making assumptions regarding their true strengths and abilities.

Is Kenpachi Stronger than Aizen?

No, Kenpachi is not stronger than Aizen, as the latter is an immortal being that surpasses himself and grows stronger each time he gets defeated. Aizen showed more raw attributes and Reiatsu than Kenpachi and also had more abilities and powers greater than Kenpachi.

Aizen’s power scaling comes on terms with Yhwach’s, and Kenpachi’s is nowhere near the level. Kenpachi can keep slashing for eternity, whereas Aizen will just keep getting stronger and stronger.

Kenpachi will not have a counter to Aizen’s Kyoka Suigetsu and other quirky attributes and is ultimately less strong than Aizen.

How Strong is Kenpachi Bankai

Kenpachi’s Bankai is one of the strongest in the series, and only a few characters’ Bankai powers could surpass the massive power upgrade that Kenpachi receives during his Bankai form.

His Bankai had so many destructive capabilities, even if he had not yet learned to control or master them. When Kenpachi manages to control his Bankai and use its power to the fullest, there is little doubt that it will evolve into the next strongest Bankai.

His Bankai has a vast potential to improve upon, and once it is unveiled in its true power stage, it will only come next after the now Captain Commander, Shunsui Kyoraku, and Leader of Zero squad, Ichibe Hyosube’s Bankai.

Both of these Bankai are very powerful, and coming close to them in terms of power is a feat in itself. Kenpachi will be able to achieve it with his thirst for fights and always evolving to fight stronger opponents.

Concluding our post on how strong is Kenpachi in Bleach, we can easily surmise that he is at a pretty high level to be considered a powerful ally and a force to be reckoned with.