Skip to contentHome » Anime & Manga » Ichigo vs Gojo: Who would win in one-on-one fight 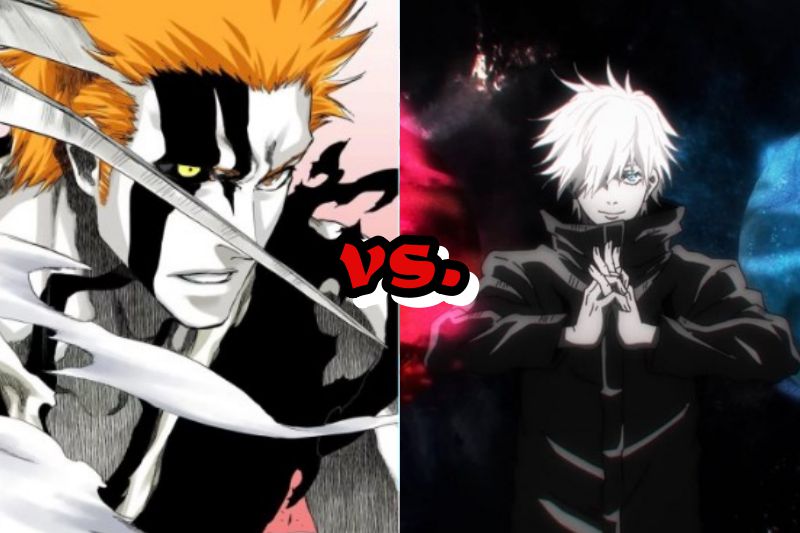 Ichigo Kurosaki, a Shinigami, Quincy, and a Hollow from the bleach series. Gojo Satoru is a top-grade jujutsu sorcerer with the power to uproot jujutsu society officials and start anew with his own rules.

Ichigo vs. Gojo is an interesting fight to witness, but this fight can be handed down to Ichigo in his strongest form, where he was able to almost kill the Almighty soul king fused Yhwach with a single strike of his Getsugatensho. Ichigo was able to escape and cancel out Kurohitsugi, which traps people in a different fabric of time and space.

Ichigo’s Reiatsu alone destroyed a different dimension, and his Quincy nature absorbs any kind of spiritual energy, fuelling more power for him. Gojo is a great opponent to Ichigo, causing a lot of trouble in their fight with his powerful abilities and combat prowess.

But Ichigo will ultimately take the win with his remarkable amount of power showcases and possessing far greater raw strength, speed, and counters, ultimately winning the fight.

Later on in this post, we will take a look at Ichigo and Gojo’s powers and abilities in detail.

Satoru Gojo is the most powerful sorcerer in Jujutsu society, who proclaimed that he would be even able to defeat Sukuna, the king of curses, at his full potential. Gojo possesses an immense amount of cursed energy, backed up by his rare condition of six eyes, with which he can reduce his cursed amount usage and make it very less.

He also has an Infinity aura around him, which makes sure that the opponent can never reach him. Controlling a vast amount of powerful abilities, which are capable of killing his opponent in one blow, what makes Gojo more powerful is his fighting prowess and his intelligence in combat.

Gojo also knows many secret abilities and techniques from the Gojo clan’s secret techniques, putting them to use very effectively in battle. Super speed and strength are some of his other attributes which were in the limelight for being too powerful.

Ichigo’s power is the added value of his multiple natures of Hollow, Shinigami, and Quincy, which gives him the combined strength and abilities of all these different entities. He is fast enough to dodge lightning strikes, with monstrous strength, which shaped mountains with just the shockwave alone.

Possessing an unsurmountable amount of Reiatsu, he is the only character who can come close to Aizen in terms of Reiatsu and has attacks that almost killed the Almighty Yhwach if not for Yhwach’s power.

Ichigo’s strength increased exponentially throughout the series, and he grew up to become one of the most powerful Shinigami. Having a strong Shikai and a fearful Bankai, he can effortlessly defeat his opponents in battle.

Ichigo vs. Gojo: Who would win & Comparison

Ichigo would take this battle in his bag, with all of his abilities and powers being superior to Gojo. Gojo is a perfect opponent for Ichigo as both of them have some kinds of similar abilities and counters to each of the other powerful moves.

Ichigo can still land an attack on Gojo with his infinity barrier, as Ichigo was shown to destroy Kurohitsugi, an entrapment that exists in a different dimension entirely. His Reiatsu alone was enough to cancel out the effects of the powerful Hado spell and breakthrough dimensions.

Another way in which Ichigo can negate infinity is through his Gran Rey Cero, which distorts the concept of space and time itself. It can easily penetrate through Gojo’s barrier dealing him a fatal blow.

He can also deal an effective blow with his Getsuga Tensha and Getsuga Jujisho, which even injured Yhwach with his Blut Vene active of the greatest strength active that will chip away at his cursed energy and his barrier.

Gojo can still counter using his domain expansion and trap Ichigo, but it is a double-edged sword that threatens Gojo’s safety, too, by making him vulnerable to all of Ichigo’s attacks. Now, let us compare Ichigo vs. Gojo based on some of their other abilities too.

Ichigo wins this round of strength with his superior raw strength, which beats Gojo even if the latter uses cursed energy to unleash black flashes.

Ichigo has shown a tremendous amount of strength, breaking down mountains with the shockwave of his strikes alone. He was almost able to stand toe to toe with Aizen on par with strength.

Following up on his already surplus strength, his Hollow nature further enhances all his attributes, which will ultimately lead to Gojo losing this round of strength.

Ichigo comes out on top in this area after becoming a shunpo expert and effectively able to dodge lightning strikes from Candice, which were surmised to be at the real speed of lightning, no less. Gojo is fast, but he is not fast enough to catch up to Ichigo or any of his attacks.

Ichigo, in his final form, fought on par with Yhwach in terms of speed and was still able to land some fatal blows on the latter. Theorized to be miles faster than the speed of light, his speed would further be increased by his true Bankai and Hollow transformation.

Gojo is still faster than the speed of light but falls flat when compared to Ichigo’s feats and what he achieved. Ichigo has this easy round, with a win in his bag, with a high-caliber display of speed.

Gojo will take this round with his various purpose abilities, each that caters to the different usage, and he is also able to invent new techniques out of thin air just to make a counter for his opponent.

Gojo’s intelligence plays a vital role in this bout, as he can devise new techniques or counters to anything easily. Ichigo has a powerful set of abilities, but most of his powerful attacks come from his sword, and he will be a bit limited in this area.

This round ends with Gojo stealing the win from Ichigo with numerous abilities, which sends fear into his opponents.

Ichigo has superior durability only due to his Hollow transformation and innate Quincy nature. He can use Blut Vene, one of the most powerful Quincy shields, to protect or either heal himself.

Gojo has his infinity barrier, but that will not be much of a problem once Ichigo manages to break it using his attacks that can distort space. The only trick Gojo has on his sleeve will now be his healing, which will also be negated as Ichigo has the same ability.

Ichigo has a very strong Blut Vene, which did not even let Yhwach’s sword penetrate through during their first encounter. Add his hollow nature to the mix too, which vastly increases his durability, which makes it an easy win for Ichigo.

Concluding this battle of Ichigo vs. Gojo, we can surmise that the former is superior on many terms and has the powers as well as abilities to defeat Gojo. This fight will be one of a kind as both of the characters possess many opposite abilities, which would make it a dragged-out battle, which will make a one-on-one Ichigo vs. Gojo fight pretty interesting to watch.