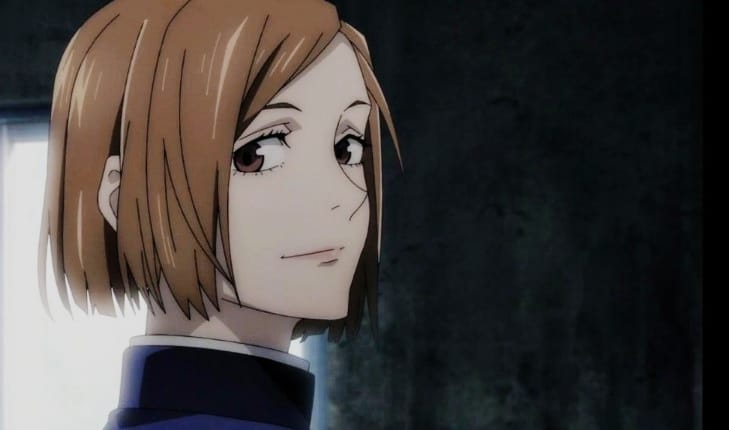 Jujutsu Kaisen is a manga series written and illustrated by Gege Akutami. It began serializing in Weekly Shonen Jump in March 2018. It has gained worldwide popularity in recent years and also won Crunchyroll‘s Anime of the Year.

Shoko is a doctor at Tokyo Metropolitan Curse Technical College. She has long brown hair extending past her shoulder. She has brown eyebrows and tired eyes, with a mole under her right eye. Shoko usually ties her hair in a ponytail with a light scrunchy. Her attire consists of a white lab coat over a blue shirt and navy blue pants with high-heel shoes. Shoko, with her charming appearance, takes the tenth spot in our rankings.

Momo is a third-year student at Kyoto Metropolitan Curse Technical College. She is very young and has a petite appearance. She has light-colored hair, which is tied into two pig-tails and soft eyes. She also wears a pair of earrings and a collar on her neck. This suits her witch-like appearance with her broom that she carries everywhere. Her attire consists of a loose, short-sleeved black shirt and matching pants with black shoes. Thus, Momo, with her quirky style and appearance, takes ninth place in the rankings.

Sasaki is a second-year student at Sugisawa Third High School. She has dark-colored hair that extends below her ears. She has thin eyebrows, and she wears glasses. Sasaki usually wears a light-colored vest over a light-colored long sleeve shirt. She also wears a dark-colored skirt and light-colored shoes and socks. Sasaki, with her simple yet charming looks, takes the number eight spot in our rankings.

Mai is a second-year student at Kyoto Metropolitan Curse Technical College. She has mid-length black hair reaching up to her neck. Her eyes are dark-green, and she has thin eyebrows as well. In school, she wears the traditional long-sleeved jacket and a long skirt with dark shoes. While training, her outfit comprises of a long sleeve tracksuit with black sleeves and a white body, and black pants. Her casual outfit comprises a black sleeveless high collar shirt with a black long skirt and black shoes. She is also a very straightforward person, which makes her even more attractive. Thus, Mai finishes as the seventh most beautiful female character in Jujutsu Kaisen.

Yuki is one of the four Special Grade sorcerers in Jujutsu Kaisen. She has long, light-colored hair extending past her shoulders and thin eyebrows. She usually wears a dark-colored long-sleeved jacket over a sleeveless dark-colored shirt. She also sports light-colored pants and heeled shoes. Yuki usually has a relaxed and cheerful personality that makes her even cuter. As a result, Yuki manages to take sixth place in this list.

Tsukimi is the step-sister of Megumi Fushigoro. She has long black hair extending past her shoulders, and she ties it in a ponytail. In middle school, she wore a light-colored jacket, a black skirt, and black shoes. She usually wears a light-colored turtleneck. She has a beautiful aura about her. She also has captivating eyes that increase her beauty even more. Thus, Tsukimi takes the fifth spot in this list.

Mei Mei is a Grade 1 sorcerer in Jujutsu Kaisen. She has long, pale blue hair extending past her shoulders. It is tied into two braids, one of which hangs in front of her face and the other behind her head. She also has thin eyebrows. She usually wears a black long-sleeved dress with black shoes. Although her casual attire consists of a light-colored dress with no sleeves, and she wears her hair in a single braid. Mei Mei, with her unique attire, comes in the fourth spot on our list.

Kasumi is a second-year student at Kyoto Metropolitan Curse Technical College. She has long hair, which is light blue in color, extending past her shoulders. The hair in front of her head is cut diagonally, and she has dark-colored triangle-shaped eyebrows. Her outfit consists of a black long-sleeved jacket over a light-colored button-down shirt and a black tie. She also wears matching pants, socks, and shoes. She usually wears a belt to hold her sword. While training, she ties her hair in a ponytail and sports a dark-colored tracksuit. Kasumi, with her elegance, acquires the third position in this list.

Nobara is a first-year student at Tokyo Metropolitan Curse Technical College. She is a short girl with orange eyes and dyed orange hair. Her attire varies according to various situations. In school, she wears a black button-down jacket, a black long skirt, black stockings, and black shoes. She also uses a belt to hold her hammer, nails, and straw doll. While training, she wears a light-colored hoodie with black pants and white shoes. Her casual attire consists of a black sleeveless shirt, a sweat wrapped around her neck, and a long black skirt. Thus, our self-confident Nobara becomes the second most beautiful female character in Jujutsu Kaisen.

Maki Zenin deservedly takes the first position in this ranking. She is a second-year student at Tokyo Metropolitan Curse Technical College. She originally belongs to the Zenin family. She is quite tall and athletic with black eyes. Her long black hair remains normally tied into a ponytail. She has bangs over the left side of her face, and she wears a pair of glasses that helps her to see curses. In school, she wears the traditional long sleeve jacket with a skirt. Her training attire comprises a black jersey with a dark-colored collar. She also sports dark-colored shorts over black pants and white shoes. Casually, she wears a white hoodie over a black and white shirt, white shorts over black pants, and white boots. She is also quite headstrong and blunt, and her confidence radiates her beauty even more.

Nagi Yoshino is the mother of Junpei Yoshino. She is a slender woman with shoulder-length black hair. She shares a strong resemblance to her son Junpei. Her attire comprises of a black long-sleeved shirt, with black pants that are held with a light-colored belt. She is a friendly laid back woman and is unlucky to miss out on this list.

Utahime is a Semi-Grade 1 sorcerer and a teacher at Kyoto Metropolitan Curse Technical College. She has long, blackish-purple hair extending down her back, with some strands tied behind her head. Utahime has thin eyebrows, brown eyes, and a scar on the right side of her face. She usually wears a traditional Miko outfit with a white-colored top and a red-colored bottom. She also wears brown boots.

This brings our rankings to an end. It was not much of a surprise to see Maki Zenin at the top. She is skillful, strong, beautiful, and far more attractive than the others. However, her sister is unfortunate to be in the bottom half of the list as she faced some strong competition. Fans can watch Jujutsu Kaisen anime officially on Crunchyroll and read the Jujutsu Kaisen Manga series from Mangaplus Shueisha. We will back soon with another Top 10 list. Till then, stay tuned with us.