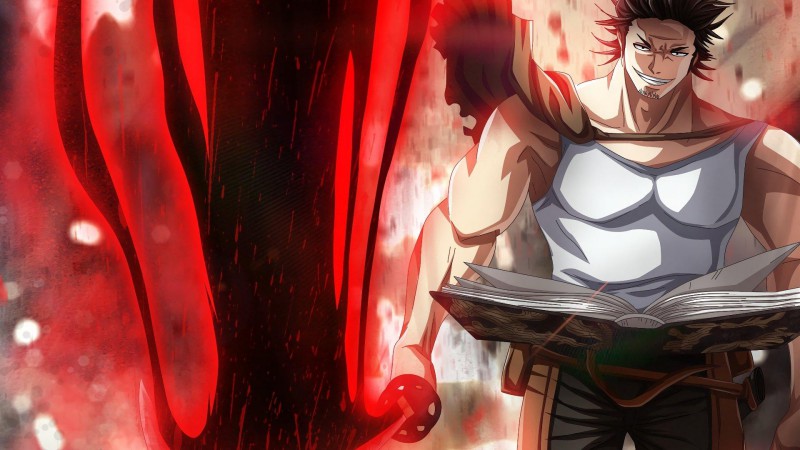 In Black Clover Series’s world where magic power is everything and the safety of the Clover Kingdom is maintained by Nine Magic Knight Captains, Yami Sukehiro is the captain of the Black Bull Squad. Previously, he was a member of Azure Deer under the captainship of present Magic Emperor Julius Novachrono.

Even though he is reckless, uncouth, and oftentimes jumps headfirst into any battles; he is loved and respected by his squad members and others. He is very hot-headed and tends to solve any problems or confrontations using physical violence. Also, he was the one to recognize Asta’s merits and gave him a chance to be a Magic Knight.

Despite his reckless nature Yami is one of the powerful, experienced, and perceptive warriors. He can also easily defeat his opponents by deciphering their strategies and is constantly breaking his limit.

As Yami possesses one of the rare magic, i.e, Dark Magic which can affect the netherworld he is also one of the Arcane Stage Mage. Besides using magic he also wields Katana and coats his weapon with his magic to cut through his opponents. He is more of a magic swordsman than a mage.

This innate power of his is capable of absorbing any magic including Light Magic and destroying mana and even space created by magic. Besides this, it can also affect any devil and can’t be controlled by Kotodama Magic. Dark Magic needs more casting time than Light Magic but Yami easily counters it by using Reinforcement Magic. Dark Magic can be used without opening Grimoire and this magic attribute grants him the ability to create and manipulate shadows at will. Yami uses this magic power to restrain and trap his opponents easily using shadows.

It is an offensive mid-range attack and it was first seen during his fight with Patolli. Yami channels his Dark Magic in his katana and releases it towards his foes. The shadow on the blade used retains the same sharpness and has the ability to absorb others’ spells even in mid-flight.

It is a close-range attack and its size is limited. It is capable of absorbing an opponent’s spells and paralyzing them if they are in contact with it. This ability was also seen in a fight against Patolli and his members. Another Supplementary type of Dark Magic and can only be cast with an open Grimoire.

Another mid-range attack skill and Yami used it against Patolli in chapter 51 of the series. Yami coats his weapon with shadow and increases the length of the shadow into a long sword to extend its reach. This spell also allows the caster to recreate a blade that was broken.

This was demonstrated in chapter 51 when Yami used it as a defense against Patolli’s Light Magic. It is Yami’s defensive spell where he creates a spherical shell of darkness around himself. Other than defense it can also be used as a means of transport. On a side note, this spell doesn’t have any specific name in the series.

This skill can cut through large areas of mana, Spatial Magic, and even space created by magic spells. Yami used this against Vetto in the Seabed Temple Arc. He also used this skill against Dante prompting the latter to escape using Spatial Magic and again later to counter Dante’s Gravity Singularity spell.

In Reincarnation Arc, Yami used the skill against two elves. As its name suggests the sword coated with Dark Magic is swung in a disorderly manner creating multiple Dark Cloaked Avidya Slashes. It is an offensive type of magic and was only seen in Chapter 168 of the series.

Another offensive close-range type of Dark Magic where he coats his weapon with Dark Magic and dashes behind his target to strike their nape with the back of his sword and the blow is strong enough to make them unconscious without any injuries. This skill was also seen in Chapter 168 of the Reincarnation Arc.

Yami used this skill to save Charla from the creature summoned by Zagred in Chapter 203. This skill is capable of pushing a target back with the blunt side of the sword when the shape of the sword is extended by shadows. It is a supplementary mid-range type of Dark Magic.

One of the powerful skills of Yami and was seen in Reincarnation Arc where he used it against Zagred and cut the devil in two. While using the skill Yami manipulates the surrounding mana to extend the range of the slash and gravely injuring his foes. This ability was seen only once in the series.

In Chapter 245 of the series, when Dante used the Demon King spell to force both Yami and Finral to the ground, Yami combined his Mana Zone and Black Hole to create the Black Moon spell to erase Dante’s magic surrounding him. This spell allows the caster to absorb the opponent’s spell while leaving an ally’s spell unaffected.

Another of the offensive close-range sword attacks and the skill was first seen in Chapter 245 of the series. During his fight with Dante, he condensed his Mana Zone and when the former attacked him from behind he slashed him. Even though Dante was able to survive by using the devil’s power to heal himself and was using 50% of the devil’s power, Yami was still able to injure him.

Yami uses this ability when the Black Moon spell is active by condensing the spell’s effect into a small area around his arm. When Dante released the Gravity Singularity spell using 100% of his devil’s power Yami countered it using Death Thrust. Later when Yami was overpowered he used Death Thrust to obliterate Dante’s chest. Dante was able to survive using Body Magic otherwise he would have died if he were not possessing his innate magic power.

It is an advanced mana control technique that allows Yami to manipulate his surrounding mana and increase his magic powers and range. He also uses this technique to augment his Mana Skin and Reinforcement Magic spells, as well as to stand and maneuver in the air. Although his control over Mana Zone is nowhere near Julius or Yuno it is still far above other mages.

A skill from his homeland which grants Yami to perceive and counterattack his opponents unseen attacks. During his fight with Patolli and Dante, he easily dodged their attacks and stood his ground using Ki. He combines his Ki-sensing with Mana Zone to further enhance his magic perception as well as increase his reflexes. He taught Ki-sensing ability to Asta.

Must Read- Top 10 Apostle of Sephirah in Black Clover Ranked

Yami possesses extraordinary physical strength which is further augmented by Reinforcement Magic. His strength also comes in handy when dealing with thugs or just simple confrontations against weak opponents. This was seen when he was able to throw Asta towards his opponent.

Black Clover is an ongoing series written and illustrated by Yuki Tabata. Currently, the series has over 11 million copies in circulation and follows the story of Yuno and Asta’s journey to become Magic Emperor all the while making new friends and fighting strong opponents. Read the officially released chapters on VIZ Media and watch the anime series on Crunchyroll.