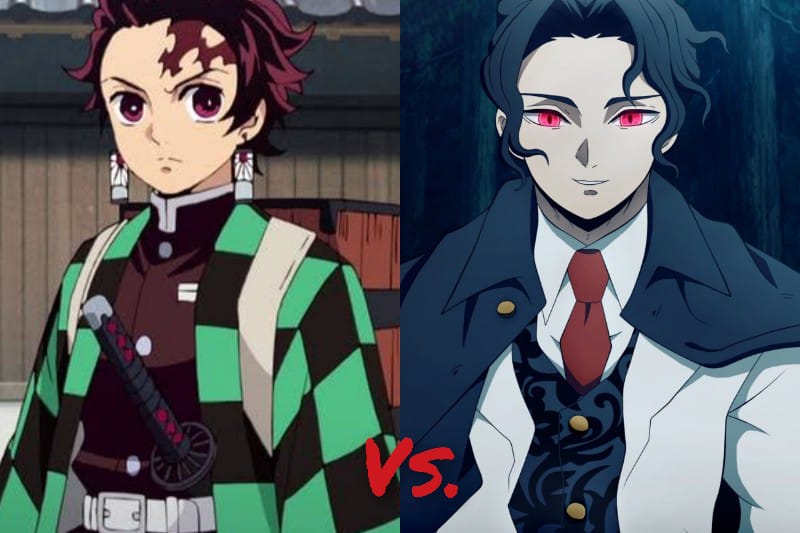 In this article, we have discussed the power comparison of Tanjiro vs Muzan in Demon Slayer based on manga knowledge. What happens when the best of humanity takes on the worst of demons? That is exactly the case of Tanjiro facing off against Muzan- the first primordial demon king intending to reign over the world. The Demon Slayer manga has already given its readers some pretty epic fight scenes, and this one is going to be no different.

When Tanjiro returns home to find his entire family assassinated in a demon attack and his only sister turned into a demon, he pledges to find a way to turn her back into a human. However, to undo this curse, he must defeat the origin of the demon race itself- and thus sets out on his quest to defeat Muzan Kibutsuji to revert his sister back. Now, without any further ado, let’s discuss Tanjiro vs Muzan.

Who is Tanjiro Kamado in Demon Slayer? History-

Before joining the Demon Slayer Corps, Tanjiro made his living selling coal at the bottom of the mountain on which his family lived. He is extremely empathetic towards Muzan’s opponents, which was one of his cardinal reasons for joining the Demon Slayer Corps as well. He is the descendent of Yoriichi Tsugikuni, the first-ever demon slayer and the pioneer of the Sun breathing style.

Tanjiro had super strength, precision, and an acute sense of smell even before he joined the Demon Slayer Cops. The fact that he went up and down his mountain carrying coal almost every day is a testimony of his strength. Also, his acute sense of smell allows him to locate enemies, a technique that he later incorporated into his fighting style. He also has extreme precision, which he enhanced after training in the Butterfly mansion.

Who made Tanjiro’s Sword?

At the very beginning of the series, Tanjiro passes the demon slayer examinations and is given his very own Nichin sword. His sword was crafted by Haganezuka, who is extremely passionate about his crafts and loathes to find the swords crafted by him broken.

Later in the Murgen Train Arc, after Rengoku’s death, Tanjiro keeps his sword hilt as a remembrance which also acts as the foreshadowing of Tanjiro learning the flame breathing technique. Tanjiro broke his sword during his fight with Rui and got a new one forged. His swords are black in color, which is unique since it is considered as the accumulation of all colors.

Tanjiro’s sword also turns red when he performs the Dance of the Sun God, which boosts his attacks and, in combination with the sun-breathing style, can even defeat one of the twelve elite demons of Muzan. His combination of water-breathing constant flux his sun breathing makes for one of the strongest attacks in the series.

Tanjiro is an expert swordsman with a wide range of attacks and the knowledge of all ten forms of water breathing techniques and thirteen forms of sun breathing techniques. However, he is not limited to those, apart from his swordsmanship, Tanjiro also has a vast range of powers and abilities that he can use in battle to enhance his battle prowess.

Tanjiro was able to move at lightning speed in a few months of training and was almost able to land Giyu Tomiyoka a fatal blow. After training in the Butterfly Mansion, Tanjiro’s speed and reflexes increased drastically, and he was able to perform Constant Breathing while moving, something which only the Hashira had mastered.

In his training with Gyomei Himejima, Tanjiro was tasked with carrying three enormous logs up the hill, which shows the extent of his strength. In his first meeting with Giyu Tomioka, he was able to throw his hatchet perfectly to distract him, which also shows how accurate Tanjiro can be.

The demon slayer mark covers Tanjiro’s forehead scar and extends over his eyebrows like his predecessor Yoriichi. It increased his physical abilities like his ancestor and gave Tanjiro two special abilities with the development of the technique:

Bright Red Nichirin Sword -Tanjiro can turn his sword red. He used this technique after mastering the Sun Breathing, which allowed him to drive Muzan into a corner with Giyu’s assistance. He first displayed this skill during his battle with Rui.

Transparent World – Tanjir inherited this technique from his father and can use this technique to perceive his opponent’s attacks and movements through analysis of their blood flow and state of organs which greatly increases his perceptiveness in battle.

Tanjiro began his training under Sakoji, who was a Water Hashira himself. Although Tanjiro’s body was not naturally suited for the water breathing style ( due to him being a descendent of Yoriichi), he still managed to master all ten forms of water breathing by the end of the series.

Being the descendent of Yoriichi, Tanjiro’s body was more suited for the Sun Breathing form which was pioneered in the Kamado family. He later switched to it as his primary technique after the Murgen Train Arc and can perform all thirteen forms of sun-breathing techniques.

Who is Muzan in Demon Slayer? History-

Muzan Kibutsuji is the first demon and the primary antagonist in Demon Slayer. He is the leader of the Twelve Kizuki and is the primary progenitor of the Demon Race. Millenia ago, he was afflicted with a rare condition that would have crushed him before reaching the age of twenty. A doctor began his treatment, however he eliminated the doctor out of frustration.

Later her realised that his treatment was successful but incomplete, and therefore continues to search for the rare blue spider lily flower which is one of the chief ingredients in the preparation of his medicine to become the ultimate demon resistant to sunlight.

Who defeated Muzan? In the past-

Muzan was earlier defeated by Yoriichi, the first demon slayer and the pioneer od Sun- breathing technique. He sliced Muzan into pieces and left him, and it was the only time that Muzan had actually feared a demon slayer.

Muzan takes the form of a giant baby spanning up to three floors of a building in his demon form while swelling his flesh. He has the ability to control any part of his body owing to his blood demon art and has instant regeneration, which allows him to heal from any injury except the sun.

What is Muzan’s blood demon art?

Muzan’s blood demon art is biokinesis, also known as the ability to manipulate his body and change the placement of his organs. He has seven hearts and five brains, and his shapeshifting ability is the most powerful in existence which he can use to transform into a man, woman, child, or even a cocoon of flesh.

Both Tanjiro and Muzan are extremely fast; however, due to Muzan’s blood demon art, he can generate extra limbs and hands, which contributes to his speed. Muzan takes this round by a slight margin.

Based on raw strength, Muzan takes this round. However, if we are to add all forms of weaponry and battle intelligence, the Tanjiro has a chance of defeating Muzan due to his superior battle intellect and a greater propensity of adaptability during battle. In Tanjiro’s demon form, however, Tanjiro wins it cleanly.

In both of these categories, Muzan takes the upper hand. His extreme regenerative abilities make him durable, and having lived a millennium, he has all the battle experience. Tanjiro, in his human form, cannot defeat Muzan despite all of his latent abilities since he was a part of the demon Slayer cops for a limited time.

Tanjiro can perform two different breathing styles as well as has latent abilities. In contrast, Muzan has his blood demon art and his regenerative powers as a demon. Both of them cancel out each other’s powers, and this round can be considered a draw.

Tanjiro vs Muzan | Who will win in one-on-one battle?

Muzan takes the fight against Tajiro’s human form. It was only with the help of other Hashira that Tanjiro was able to drive Muzan into a corner, and despite Tanjiro being one of the most gifted swordsmen of his generation, he would lose against Muzan.

For a brief period of time, Tanjiro was transformed into a demon before being reverted back by Tamayo’s humanizing drug. In his demon form, Tanjiro had advanced regeneration like Muzan as well as biokinesis and was the only demon to be unaffected by the sun, so much so that Muzan recognized him as the demon that could even surpass him and Yoriichi.

Q1. Who does Tanjiro marry?

Q2. Who is Yoriichi to Tanjiro?

Ans. Yoriichi was Tanjiro’s ancestor’s close friend. He was the pioneer of the sun-breathing style. He taught the Hinokami Kagura (or the Sun Breathing) to the Kamado Family which was passed down.

Ans. Sakonji, a former water hashira trained Tanjiro initially. Later Tanjiro was trained by the other Hashiras in the Hashira Training Arc.

Q4. Who turned Nezuko into a demon?

Ans. Muzan Kibutsuji attacked and turned Nezuko into a demon.

The Demon Slayer manga is available for reading on Viz. You can also check out two of it’s seasons on Netflix.