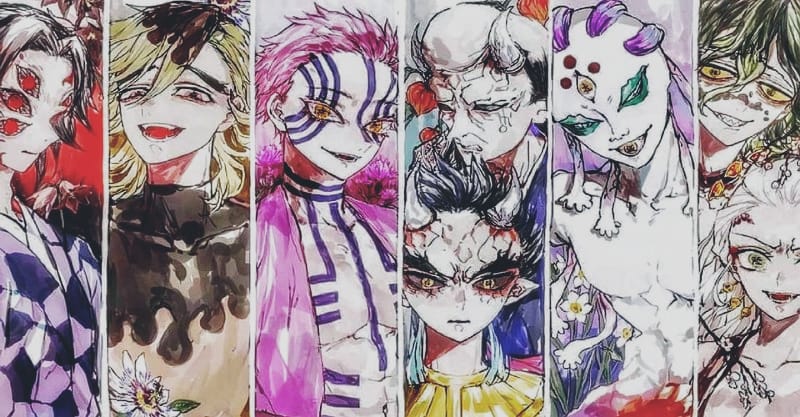 Demon Slayer: Kimetsu no Yaiba is a Japanese manga series written and illustrated by Koyoharu Gotouge and has been deemed as one of the most popular shonen jump series. Sold over 150 million copies as of 2021 and also had a record run in the Japanese Box office by becoming the highest-grossing film in history. With different characters, elements, and a narrative storyline like other shonen series, Kimestu no Yaiba shines in its own way.

Notable characters such as the Hashira’s and the Twelve Kizuki’s are what make the series even more interesting. The Twelve Kizuki or the Twelve Moons is an organization consisting of the twelve most powerful demons which are under the direct command of Muzan a.k.a the Demon king.

Susamura was introduced in the Asakusa Arc where she displays her incredible physical strength and fighting abilities using her Temari. By manipulating her flesh she could grow four more arms amplifying her offensive output.

Her blood demon art allows her to conjure Temari at will which she can either throw or kick at incredible speed and power. Although she was strong, Tamayo easily deceives her, and Kibutsuji’s curse kills her which is why she is ranked 15 on the list.

Also known as the arrow demon appears in the Asakusa Arc who fights along with Susamura. By manipulating his own flesh, he can morph two eyes on his palm with arrows for irises but also at the cost of his regular eyes.

Using his blood demon art, he can track other demons and also manipulate matter and interactions through their related vectors using his Koketsu arrows.

He was defeated by Tanjiro who used the vectors by enveloping them to his water breathing technique and used that momentum to direct his attack. Since his blood demon art can be evaded by following the direction of the vector, he is ranked 14 on the list.

Rui first makes an appearance in Episode 15 of the Natagumo Mountain Arc. Rui was one of the Lower moons who possessed incredible powers and superhuman strength and durability.

Just like Muzan, Rui could also strengthen a fellow demon by giving them his Demonic blood. He had traits like that of a spider and also created and manipulate steel thread using his blood demon art. His steel threads could still be cut by Tanjiro and burned by Nezuko so he is ranked 12 on the list.

Enmu first appearance was in the Rehabilitation training arc and also appears as the antagonist in the Mugen Train Arc. As one of the twelve Kizuki, Enmu possesses enhanced speed and reflexes, which evade attacks with ease.

As a demon, Enmu can manipulate flesh to attach himself to inanimated objects and also detach his own flesh making a clone of himself to fool others.

By using his blood demon art, he can manipulate dreams and also put his target to sleep by mixing his blood with other fluids making them vulnerable. Although his blood demon art is strong it’s not invisible since it can’t affect other demons like Nezuko and can be blocked if one’s viewpoint is changed. Hence, he ranked 13.

Kaigaku was a former demon-slayer turned demon who was also the senior disciple of Zenitsu Agatsuma who both trained under the Thunder Hashira. As a former demon slayer, Kaigaku was definitely one of the strongest upper moons.

By manipulating his own flesh he can turn them into sharp sickles and also detach his cells and merge with his sister to boost all of her powers. His blood demon art allows him to manipulate his own blood creating sharp objects and controlling them at his own will and can also use it as a lethal poison to kill his target. Nezuko could easily heal the lethal poison using her blood demon art during the battle and so he ranks 11 on the list.

Next on our list is the Upper Moon 5 Gyokko, who in fact is a disfigure humanoid and has only a torso with infant-like hands on his back and grows out of a porcelain pot and looks similar to that of a djinn.

This demon can be seen in the Swordsmith village arc where he fights Muchiro. Using his blood demon art he can materialize pots out of thin air, manipulate water and transmute the objects into fish when he touches them. He was defeated by Muchiro after awakening the demon slayer mark and thus he ranks 9 on the list.

Hantengu is one of the Upper Moons and also the only demon who could split himself into 6 different demons possessing different abilities of their own. He can manipulate lighting, wind, sound waves, wood, and also spear at his will.

He can even combine his demons into a stronger demon giving him enchanted abilities and offensive power. Hantengu was defeat by Tanjiro after  Nezuko sacrificed herself exposing both of them to sunlight, and so he is ranked 8 on the list.

Using her blood demon art, she can manipulate space to a certain extent and also create portals in the form of doors and use them for assisting other demons and herself during battles.

She can also create and detach several eyeballs which can be used as a mode to spy on other people from a long distance. She was killed by Muzan after Yushiro takes control of Nakime’s vision.

Although she isn’t that strong as compared to the other Upper Moons in power and combat, she still managed to fend off two Hashira’s that is the reason we ranked her 7 on the list.

Nezuko is the sister of the main protagonist Tanjiro in the series who turned into a demon after Muzan attacked and killed all the members of the Kamado family.

As a demon, Nezuko possessed enhanced physical strength and abilities, she can restore her power and also grow them without any training or consuming humans.

She also possessed immense regenerative abilities like that of an Upper Moon and could even alter her body size by shrinking. She also developed blood demon art and had a pryokinesis likeability which could deal a significant amount of damage to the Upper moons.

Nezuko is the first and only demon to have resistance to sunlight, that is the reason why she ranks 6 on the list.

Douma was formerly an Upper Moon 6 and move up his rank to Upper Moon 2. He had a nihilist personality and also was the leader of the cult called the Eternal Paradise. Being an Upper Moon, Douma possessed great endurance and regenerative abilities.

He uses two Gusen war fans as a means of weapon and could manipulate ice from his flesh and blood and control them at will. His blood demon art allows him to create powdered ice which can suck human blood causing the cells to slowly deteriorate resulting in death. He died from Wisteria flower poison after devouring Shinobu, hence he is ranked number 5 on the list.

Akaza was one of the strongest demons in the series and also the only martial artist and hand-to-hand combatant demon among the Upper Moons.

He possesses great reflexes and speed and also physical strength allowing him to create shockwaves when using his fist or kicks. Akaza uses Soryu style martial art which in fact helped him create different techniques like the destructive death style and bell crusher.

Using his demon blood art, he can precisely track his opponent’s movements and hit the vitals points by deploying a blue snowflake-shaped compass needle.

He is also one of the 4  demons who can regenerate or recreate his own head back even after being cut off. Akaza was defeated after he lost his will to fight while he regaining his memories back, thus he is ranked as number 4  on the list.

His breath of the Moon style got even more power and enhanced after he became a demon. He could manipulate blades from his flesh and also regenerate them back once they’re broken or destroyed.

His blood demon art compliments his breathing style allowing him to create crescent moon-shaped air slashes from his blades. He is also one of the four demons who could regenerate his head back when being cut off.

He lost his will to fight after he realized that he has turned into a being he didn’t want to be, thus he ranks 3rd on the list.

Muzan is the main antagonist of the series and also the first human to turn into a demon while trying to cure his terminal illness. As the demon king and the leader of the 12 Moons, Muzan possessed great power and abilities.

He could shapeshift, absorb, manipulate cells, and even create several sharp tentacles from his flesh. By using his demonic blood, he could enhance other demons and make them submit to him.

Unlike others, Muzan possessed seven hearts and five brains which likely is the reason behind his abnormally powerful power. He was defeated by the combined effort of the Demon Slayer corps and Tamayo after he was injected with the poison made by Tamayo.

It rapidly aged his cell broke down his body and finally getting disintegrated by the sun. Since he is the antagonist and also the second strongest demon in the series he is ranked 2nd on the list.

Tanjiro Kamado is the main protagonist of the series, the successor of Yoriichi Tsugikuni also the brother Nezuko who are both the last members of the Kamado family. In chapter 201 of the series, Muzan, while being disintegrated by the sun, gives all his remaining blood to Tanjiro turning him into a demon.

Just like Nezuko, Tanjiro was also immune to the sun, and with the infused blood of Muzan, Tanjiro arguably became the strongest demon in the series. After becoming a demon and with the demon slayer mark Tanjiro could also use the breath of the sun.

His blood art technique enables him to use a powerful demonic blast from his mouth and also could grow several sharp tentacles from his flesh. He was defeated by the combined effort of the demon slayer corps by using the medicine that Tamayo made to turn Nezuko back to a human.

Since he was the second demon to conquer the sun after Nezuko and even possessed more power and abilities than Muzan, Demon King Tanjiro is notably the strongest demon. Thus he ranks number 1 on the list.

That concludes our ranking for the Top 15 Strongest Demons In Demon Slayer, the ranking was done based on research and the potential of each character and their growth as a demon. Meanwhile, fans can read the series from MangaPlus by Shueisha.