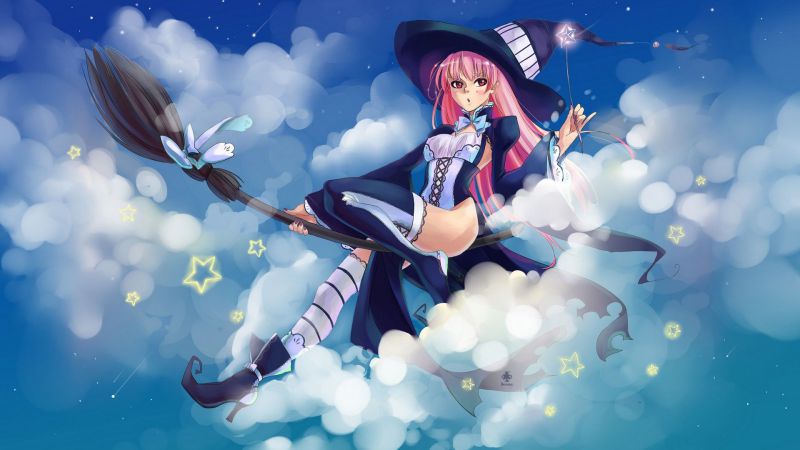 The first thoughts that come to our mind when we hear the word Witches are potions, cauldrons, spells, and broomsticks. Moreover, we are also negatively biased to associate witches with being evil characters. In most of the fairy tales that we read in our childhood, witches are the villains of the story. We never gave it a second thought that good witches may also exist who don’t want to harm others.

Our first encounter with good witches was while reading Harry Potter. Similarly, there are many animes out there that have broken the notion that witches are bad. In this article, we are going to rank the top 20 best witch animes of all time. Let us see if we can find any surprises along the way.

Plot – As the title suggests, this anime is strictly not about Soul Eater. It is a prequel involving some events before the original Soul Eater. In this spin-off, we follow along Tsugumi Harudori, Meme Tatane, and Anya Hepburn, who explore their daily lives of Death Weapon Meister Academy and form a great friendship between them.

Plot – As the world is threatened by the evil forces of Dark Joker, the responsibility falls on 10-year-old Moriya Ririka to save the day. She joins forces with her childhood friend Seiya and a mysterious character named Kanon. Together with their help she transforms into the Nurse Angel and goes on her journey to defeat Dark Joker.

Plot – This anime is quite unique in terms of its setting in World War I in the year 1939. The story is centered around Izetta, who is the last surviving witch in Elystadt. After she became united with Princess Elystadt, she swore to protect the people of her country from Germania and free them from the tyrants.

Plot – This particular anime involves a fiery battle between the human race and Neuroi, a mysterious alien race. As the battle continues in Europe and Africa, a new squad is formed to turn the tides in favor of humanity. The fighter squadron is given the name of Brave Witches, and they are assigned the task of wiping out the alien invaders. The protagonist of the story is Hikari Karibuchi, who is determined to live up to her expectations after taking her sister’s place.

Plot – One of the very popular witch anime out there, Strike Witches takes its place in the 16th spot in this list. Also set in the year 1939 like Izetta: the last witch, the story involves the formation of a Strike Unit to combat against the forces of Neuroi. In this series, we follow the journey of Yoshika Miyafuji, who is on her path to prove herself as a capable strike witch despite having no formal training.

Plot- Immerse yourself in this magical world as Itsuki Iba takes over his family business which is a magician dispatch service. The goal of their business is to send out the required magicians and supernatural beings to their clients. However, things are not so easy as Iba finds himself in trouble from those who want to destroy their business.

Plot – In this engaging anime of witches follow the path of Honoka Takamiya, who considers his traveling partner Ayaka Kagari a nuisance. However, his life takes a sudden turn when Ayaka reveals herself to be a witch and protects his life. Watch as Honoka gets caught in a fight between the Workshop Witches and the Tower Witches, whose main goal is to steal Honoka’s power.

Plot – In this heartwarming series, we find an innocent girl Arusu who believes in the reality of magic. One fateful day she is transported to a mysterious world of witches where things are much darker, and witches put other magical creatures into slavery. Watch as Arusu’s morals are challenged, and she sets out to change things in her surroundings.

Plot – The third part of the famous When They Cry series matched up to its expectations quite well. Set on the island of Rokkenjima, Ushiromiya family’s head Kinzou wants to meet his long lost love, the Golden Witch Beatrice for one last time before his death. However, things don’t go accordingly as planned as the family gets trapped in a deadly struggle on the island while Kinzou tried to summon Beatrice with black magic.

Plot – In this comical and popular witch anime, we follow the story of Maria, who tries to maintain peace between France and England with her constant intervention. This leads to her getting a curse from Archangel Michael, which states that her magic powers will be lost if she loses her virginity. Although Maria pays no heed to it and continues her work, the church plots a way to put an end to her magic power once and for all.

Plot –  Watch the city of London get terrorized by dragons as 72% of all deaths are caused by them. Interestingly very few selected people can see these mythical beings. Among them are Noel Niihashi and Ninny Spangcole, working for Wing Bind, whose main goal is to protect the dragons with the help of the inhabitants of London.

Plot – In this beautiful movie by Studio Ponoc, we go along the journey of Mary, who is clumsy in her day-to-day activities. However, fate had exciting things in store for her as she discovers a broomstick deep within a forest. The broomstick takes her to the Endor College for Witches, where she begins a new set of adventures.

Plot – This highly popular witch anime follows the story of Robin, who is a 15-year-old craft user. Japan has been widespread with Witches, and a certain organization named STN-J hunts them down with their employees. Robin comes to Japan from Italy to work under that organization, but contrary to others she captures the witches alive and tries to know their reasons for becoming a witch.

Plot – In this witch anime, we join in the adventure of two best friends Chocolat Meilleure and Vanilla Mieux. They are pitted against each other in a competition to see who can become the new queen of the Witch World. Their task involves traveling to the human world and collecting human hearts. Whoever can gather the most number of hearts will be crowned as the champion.

Plot – In this simple and engaging series, we follow along Makoto Kowata’s journey as she sets out on her adventure as a witch after she turns 15. Although her life seems like any other teenager attending a high school it is much more than that. She encounters mysterious things daily and the teachings from her older sister set her apart from others.

Plot – Wandering Witch involves the story of Elaina who is inspired by the stories in her favourite book. After being motivated by a renowned witch Nike, she sets out on her own adventure to become a witch. Watch how she overcomes the obstacles along her way and goes on a full-fledged adventure. She comes across various people in her way and gains new experiences.

Plot – In this comical and hilarious anime, Yamada Kun accidentally discovers that there is a witch in his college. In a fateful misstep, he ends up kissing Urara Shiraishi and ends up discovering a hidden ability in her. They get the information that seven witches are hiding in their school, and their abilities can be unlocked only with a kiss. He then sets out to find the identity of all the witches with the help of their school’s supernatural studies club.

Plot – In this brilliant and stunning series, watch Atsuko Kagari’s adventures in Little Witch Academia as she undergoes a brilliant character development. After being inspired by Shiny Chariot, she enrolls herself in Luna Nova Magical Academy with the aspiration to become a witch just like her idol. However, things are not so straightforward and easy as she tackles the obstacles along her way and realizes the true meaning behind being a witch.

Plot – This highly rated anime follows the story of Kimihiro Watanuki who can see spirits and supernatural creatures. On a fateful evening after being bothered by some spirits he entered a house which proved to be life-changing for him shortly. He met a strange woman named Yuuko in that house who promised to rid him of his troublesome ability. However, everything came at a price and Kimihiro needed to work at Yuuko’s store for his wish to be fulfilled.

Plot – In this Studio Ghibli masterpiece, we get to know the story of Kiki, who is a 13-year-old girl undergoing training as a witch. However, this task is not easy since she has to spend her time in a faraway town to become a capable witch. The character development of Kiki throughout the movie has been brilliant as she accustoms to her new life and learns to be independent.

It is of no surprise to see two Studio Ghibli films occupy the top two spots in this list. Howl’s Moving Castle is a beautifully crafted film that touches the mind of the viewers. As the title suggests, this movie is about a wizard named Howl. One day he rescues a girl named Sophie from a disturbing situation and it goes on to change both of their lives. Sophie gets turned into an old woman by the Vengeful Witch of the West who places a curse on her. Sophie and Howl then set out on their journey to find a solution to revert the curse and turn back Sophie into her normal self.

We finally come to the conclusion of our ranking of the top 20 best Witch Animes of all time. This list was fun to make as we explored a unique genre in the field of anime. It goes on to show the vastness of this world and how many titles we are yet to explore. As expected Kiki’s Delivery Service and Howl’s moving castle cement their place at the top of the list while leaving the other titles far behind. We will come back with another top 20 article very soon. Till then, stay hyped with us.