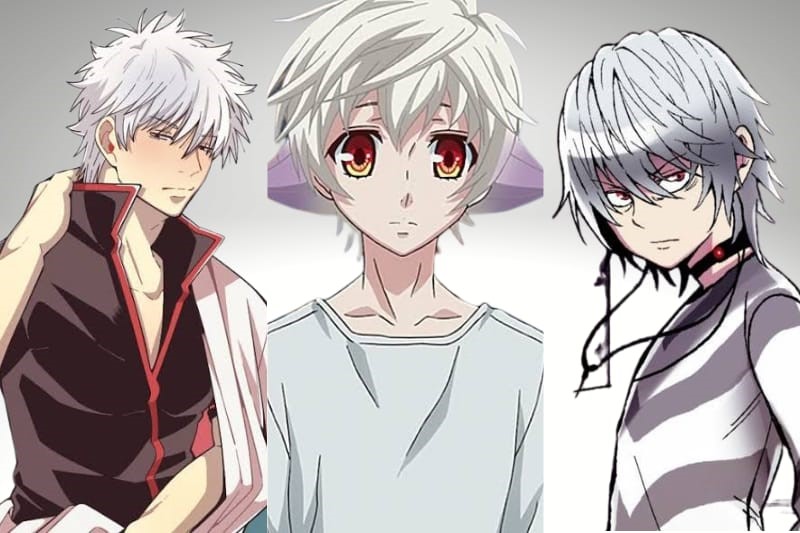 We all love anime guys with white hair and red eyes since it is a fantastic color combination. The majority of popular anime guys have white hair, but just a handful have red eyes. As a consequence, it became a very rare yet fantastic combination to watch.

After reading this post, Most of you are suspicious that these characters play significant roles in their respective series. So, without any further delay, let’s have a look at this list of the top 15 anime guys with white hair and red eyes as of 2022. 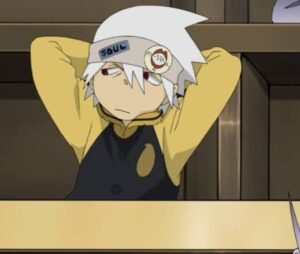 Soul Evans is one of the strongest demon weapons in the Soul Eater anime series. He was born into a musician’s family and lived an ordinary life until he discovered his true powers. After finding his true identity as a weapon master, he joined the DWM Academy to fight against demons.

Soul is a young boy with white hair swept to one side and red eyes. Due to having a major role in the series and having amazing looks, he deserves to be on this list. 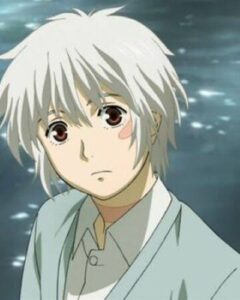 Shion is the main character of the No.6 anime and manga series. He was born with brown hair and brown eyes, but later it changed to white hair and red eyes. He also has a pink-reddish scar around his neck and different parts of his body.

Shion is a very kind and caring young boy with a superior intelligence level. He deeply cares about Nezumi and can do anything to save him. If he was not arrested by the government, he would surely have become an elite member of his society. 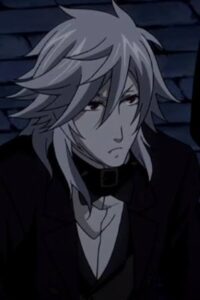 Pluto is a minor antagonist in the Black Butler anime series and plays a major role in the Houndsworth Arc. He is a demon hound with the supernatural ability to release fire from his mouth.

Pluto has shown two forms in the series: hound form and human form. In hound form, he has a dog-like appearance with white fur and sharp fangs. While in his human form, he looks like a young man with shoulder-length silver hair and red eyes with slit pupils. 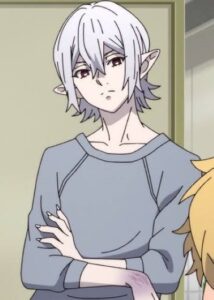 Mihai Florescu is one of the popular vampires and a major character in Kemono Jihen anime. As a vampire, he has sharp teeth and bright red eyes. His shoulder-length silver hair and pointed ears make him look even more amazing.

Mihai possesses not only incredible strength and intelligence but also great knowledge of machines. Some of his great creations are mini four-wheelers outfitted with a camera and a VR video game. 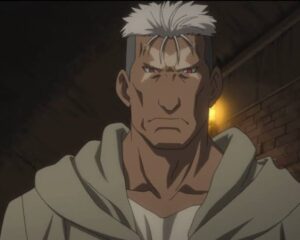 Scar is an anti-hero in Fullmetal Alchemist and plays a major role in the Ishvalan Arc. He is one of the popular anime guys with white hair and red eyes. He has incredible alchemy skills that allow him to destroy anyone by just touching them. 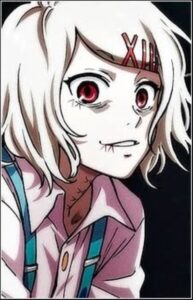 Suzuya Juuzou is the strongest ghoul investigator in the Tokyo Ghoul series. He is quite a heartless young man with amazing white hair and red eyes. He stitches his whole body in order to do some modifications.

Suzuya does not feel pain and anger due to his painful experiences in his childhood. Due to being the strongest human and killing numerous powerful ghouls, he is considered one of the strongest anime guys with white hair and red eyes. 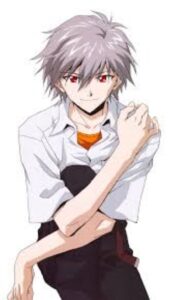 Kaworu Nagisa is a well-known anti-villain in the Neon Genesis Evangelion franchise. He is a secret agent of a mysterious society and was artificially created with the DNA of Adam and a human.

Kaworu is an emotionless young man with medium-length white hair and crimson red eyes. Being a hybrid of Adam and a human, he possesses superior intelligence and manipulative skills. Through his unique personality and incredible powers, he became one of the best anti-villains. 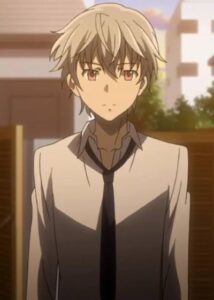 Aru Akise is one of the major characters in the Future Diary anime series and the main character in its spin-off series, Future Diary: Paradox. He is a young boy with amazing white hair and reddish-pink eyes.

Due to his superior intelligence and logical mind, he wanted to become a world-famous detective. While investigating Yukiteru Amano and other diary owners, he became close friends with Yuki and an enemy of Yuno Gasai.

7) Ferid Bathory (Seraph of the End) 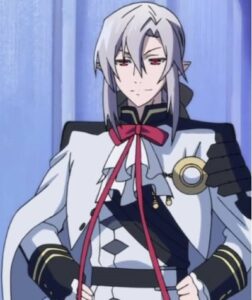 Ferid Bathory is one of the main villains in the Seraph of the End series and plays a major role in the Shibuya High Arc and Shinjuku Arc. He is the main leader of vampires during their invasion of human society and the murderer of Yuichiro and Mikaela’s family.

Ferid is a tall, attractive young man who has bright red eyes and long silver hair with bangs. He is also one of the strongest vampires in the entire series, with mysterious powers. Due to having a good facial structure and attractive physique, he became one of the hottest anime guys with white hair and red eyes. 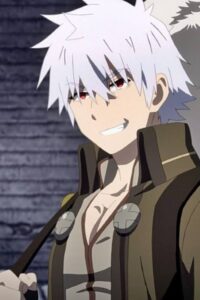 Hajime Nagumo first appeared as one of the main characters in the Arifureta: From Commonplace to World’s Strongest series. After being transformed into a monster hybrid, he became the anti-hero of the series.

In his human form, he has black hair and brown eyes, while in hybrid form, he has white hair and blood-red eyes. His personality also transformed from a gentle to a ruthless and cold-hearted person.

5) Bell Cranel (Is It Wrong to Try to Pick Up Girls in a Dungeon?) 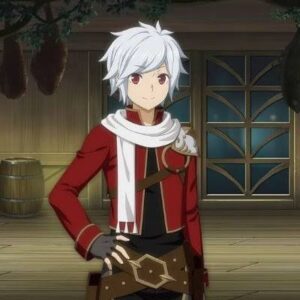 Bell Cranel is the main character of Is It Wrong to Try to Pick Up Girls in a Dungeon? anime series. He is the captain of the Hestia family, an exploration-type family, and the only member who went to level 4.

Bell is a young boy with white hair and red eyes. Despite being a boy, he is acknowledged as cute throughout the series by many female characters. He is also quite powerful and possesses many powerful skills, such as fire magic and being an expert at using knives.

Nai is one of the most attractive anime guys with white hair and red eyes. He is one of the main characters of the Karneval anime series, alongside Gareki. He is half human and half niji and lived in the niji forest until he met Karoku, a human.

Niji greatly admired Karoku and regarded him as his father figure. As a niji, he has a superior sense of hearing. He also had a special ability that allowed him to sense the emotions of others. 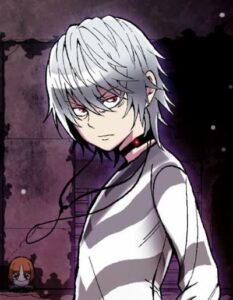 Accelerator first appeared as a villain in the “A Certain Magical Index” series, but later, he became the second main protagonist. He is the strongest esper in the academy city with incredible supernatural powers.

Accelerator is a skinny young boy with mop-top white hair and red eyes. His personality is quite sadistic, and he possesses many extraordinary abilities. He is capable of reversing the blood flow inside a person’s body, which causes a massive plasma storm that leads them to death. 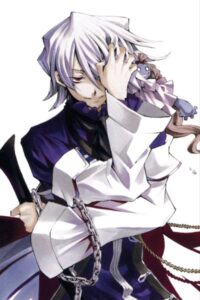 Xerxes Break, also known as the Mad Hatter, is the main character of the Pandora Hearts anime series. He has short white hair and wine-red eyes, but his left eye was taken by Alice. He is a carefree person and is usually seen alongside a doll named Emily.

Break serves as a mentor figure to the other protagonists and delivers them on their missions. He is the representative of Pandora, an organization that wants to unravel the mysteries of Alice, the main antagonist. 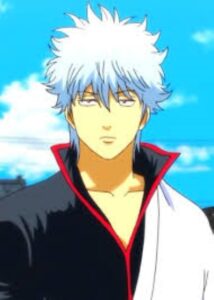 Gintoki Sakata is the most popular anime guy with white hair and red eyes. He is the strongest samurai and the main character of the Gintama series. He is always ready to do any type of work in order to pay his rent.

Gintoki is regarded as the White Demon due to his wavy white hair, demonic look, and excellent swordsmanship. His personality is quite different from the other series characters, and he likes to read Shounen Jumps to pass his time. His great sense of humor and powerful skills make him popular among the fans.

We’ll wrap off this article by talking about every single guy on the list who has white hair and red eyes. We compiled this incredible list based on their popularity and roles in their respective series. Each of them has a distinct appearance and attractive hairstyle that you will certainly admire. They also play important roles in their own series and leave an unforgettable impact on fans’ hearts.