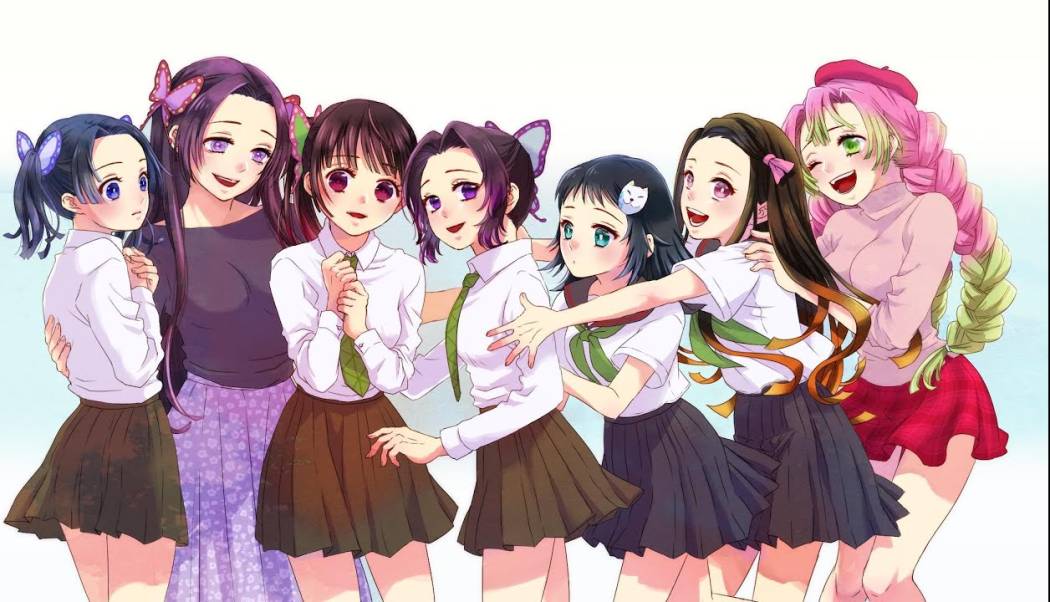 Today we bring to you an article on the Top 10 Cute Demon Slayer Girls Ranked. And in this article, we’ve been sure to note the most adorable cinnamon rolls of the series.

The Demon Slayer characters are quick to capture our hearts with their strong personalities. But it’s a true arrow to the heart when we have adorable little girls appear and brighten our day.

If you’ve only watched the series, we can guarantee that the series has many more bundles of love to offer. And so, without any further ado, let’s get into the Top 10 Cute Demon Slayer Girls Ranked.

Nichika and Hinaki Ubuyashiki were twins and the oldest children of Kagaya Ubuyashiki. Both of them wore dark blue kimonos; however, Nichika had a yellow ribbon in her hair while Hinaki had a red one.

Although not much is known about their personality, they spent most of their time aiding their father. In the series, they were portrayed as extremely obedient and loyal.

In fact, their dedication was shown moments before the final battle, wherein they sacrificed themselves with their family to defeat Muzan.

Kuina and Kanata are the youngest twin sisters of the Ubuyashiki family. Like their sisters, they too have similar features.

After the death of their parents and the elder twins, both of them aid Kiriya Ubuyashiki, the head of the Ubuyashiki household. The two are quite mature for their age and have a great sense of responsibility.

Hanako Kamado was the youngest sister of the Kamado family. Being the youngest daughter, she was immensely loved and also attached to her siblings and parents.

In the series, she seems to be a little stubborn about not being allowed to follow her brother Tanjiro. She was also an incredibly caring sister who later appeared in the Entertainment District Arc.

Here, she ensured Tanjiro’s survival by reminding him to breathe to protect his life force.

Makomo was an apprentice of the former Water Hashira, Sakonji Urokodaki. As a child, she was calm, kind and loved Sakonji very much as he was like a foster father to her.

This is why, after she passed away, her spirit moved to the Sagiri Mountain, where Sakonji lives. As a spirit, she appeared to guide and correct Tanjiro as he trained.

Even then, she didn’t cease to show her kind side through her mysterious advice. This makes her a cute Demon Slayer character, especially since she always frustrates Tanjiro with her advice.

Aoi Kanzaki is a demon slayer that resides in the Butterfly Mansion. Since she prefers not involving herself in battle, she works as a medic of sorts.

Although a little serious and stern, she is also incredibly caring, helpful and prefers to wear her heart on her sleeve. Her reactions and slight tsundere personality make her expressions incredibly adorable.

The Love Hashira, Mitsuri Kanroji, was an incredibly attractive demon slayer. As a Hashira, she was incredibly strong and caring of her acquaintances.

Further, she had an incredibly adorable personality that was friendly and fun. She also had a side that is a little stubborn, especially when her energy wasn’t reflected by others.

But with her looks and personality, it is almost impossible to get mad at her. What’s even better is that her personality was so welcoming that anybody she spoke to was immediately set at ease.

Kanao Tsuyuri is the adopted sister of Kanae and Shinobu Kocho, who reside in the Butterfly Mansion. Due to her tough childhood, she is silent and indecisive but always does her best.

In the series, her most comical moments occur when she brushes off the talkative Tanjiro. To match her adorable personality, she is also a Flower Breathing style user. She uses her skill in the final arc to exact revenge for both her sisters.

Naho Takada, Kiyo Terauchi, and Sumi Nakahara are servants at the Butterfly Mansion. The trio is very often seen together as fun and mischievous little helpers.

The three are the ones who encourage and help Tanjiro, Inosuke, and Zenitsu during the Rehabilitation Training Arc. Here, they not only helped them heal but also helped them master Total Concentration Breathing.

Further, the interactions between them and our three favorite characters make them some of demon slayer’s cutest characters.

Nezuko Kamado is the cute little second protagonist of the Demon Slayer series. With her large eyes and tiny body, she looks at an incredibly adorable doll.

However, even as a demon, she is immensely caring and attached to her brother, Tanjiro. All of her non-battle scenes include her being a complete cinnamon roll.  Further, even when in stubborn tears, she manages to be an incredibly cute Demon Slayer character.

This toddler was incredibly cheerful and even managed to console Yoriichi with her dazzling smile. Although she hasn’t made a prominent appearance in the series, her resemblance to Nezuko is very much obvious.

And honestly, since she is a literal mini Nezuko, we couldn’t help but put her up as the cutest Demon Slayer character.

With this, we conclude with our listing of the Top 10 Cute Demon Slayer Girls Ranked.

We hope that we’ve kept you thoroughly entertained and reminded you of the little sweethearts of the Demon Slayer series. And if you haven’t found any of your favorites here, you’ll surely find them in our other similar listings.

Fans can watch Demon Slayer Season 1 officially from Netflix. And so, we hope you’ll stay safe while staying tuned and hyped for our upcoming articles.