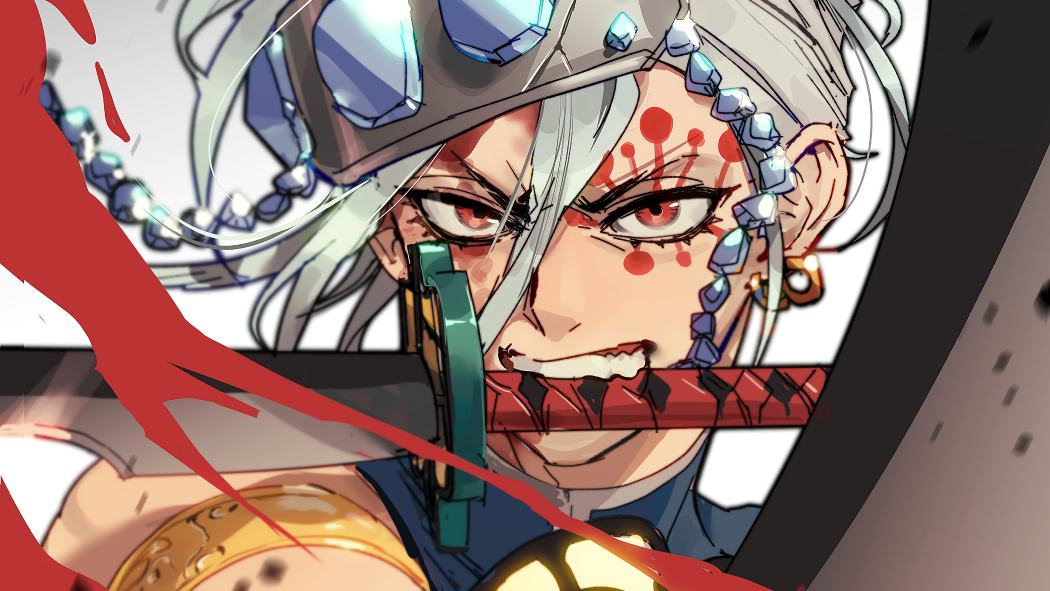 With Demon Slayer Season 2 just around the corner, the hype sure is high. And so we bring you an article on the Power of Tengen Uzui (Sound Hashira) in Demon Slayer 2021.

The Demon Slayer series animated by Studio Ufotable is well known for its animation and storyline. Overall even the manga has a considerable fanbase waiting in anticipation for new characters to be animated.

Thus with season 2 coming out, the most anticipated appearance is that of Uzui Tengen. So in case you need a briefing on him, let’s get into the Power of Tengen Uzui (Sound Hashira) in Demon Slayer 2021.

Who is Tengen Uzui (Demon Slayer)?

Tengen Uzui is the Sound Hashira who appeared in the Entertainment District Arc. This flamboyant man comes from a shinobi background which explains his immense battle skill and knowledge.

He is one of the two surviving children of a family of 10 children. This is because his family believed in succession through survival of the fittest. Thus the Uzui family selected its successors by making the children for the position.

Since his family practices polygamy, he has three wives who are all trained ninjas. In the Entertainment District Arc, he battled the Upper Rank 6 siblings, following which he retired as the Sound Hashira.

His reason for retirement was due to injury, which included the loss of an eye and an arm. However, even after retiring, he stood guard to protect the remaining Ubuyashiki family during the Infinity Castle Arc.

As the Sound Hashira, Tengen relies on sound-based attacks and thus requires two blades. His blades hold great explosive power that can destroy any demon below the Upper Rank without much effort.

Thus his Sound Breathing and power are further enhanced by his use of blast. The shell he uses are special anti-demon.

Considering his shinobi background, he has endured the harshest training since childhood. Thus he excels in strength, stealth, poison resistance, speed, and endurance.

Further, he also has a sharp sense of hearing which allows him to use echolocation and predict his opponent’s attacks through sound. He also has a great amount of battle experience, due to which he can make quick decisions.

This has helped him figure out the best way to use anti-demon blasts in collaboration with his dual swords.

The Sound Hashira created the Sound Breathing style to match his flamboyant personality. This is because his attack style includes dual blades.

There are a total of five forms of sound breathing, out of which we have only seen three so far.

This form is a loud-sounding attack the resembles thunder. It uses the user’s force of the two blades with simultaneous explosions to create great physical damage.

The fifth form uses different ranges of attacks. One blade is held in the reverse grip while the other is spun using the connected chain. When coupled with the release of blasts, it has great effectiveness and damage.

As mentioned before, Tengen’s shinobi background grants him an upper hand against most demon slayers and demons. This is because he possesses the speed, experience, and skill that baffle even most demon slayers.

Furthermore, his raw physical strength is second only to Gyomei Himejima.

Through the series, we find that Tengen cares deeply about his three wives. This is proved as he goes as far as to make them go against the idea of self-sacrifice to complete a task.

Thus he asks them to cherish their lives more and retreat when faced with life-threatening situations.

Makio in the Entertainment District Arc was an undercover courtesan at the Ogimoto House. Here as she investigates the movements of demons, she reports to Tengen via crows.

After being rescued by Inosuke, she displays exceptionally flexible and quick movements. Her weapon of choice as a ninja is a kunai.

Suma is best described as the female version of Zenitsu. She worked undercover as an Oiran in the Tokito House in the Entertainment District Arc.

As a ninja, she possesses the required skills of stealth, flexibility, and speed. However, in dangerous situations, she is easily flustered.

In the Entertainment District Arc, Hinatsuru worked undercover in a low-class brothel in the Yoshiwara district. She is well known as the calmest and most rational wife, and as a ninja, she is dedicated to her tasks.

Hina most likely specializes in poison as she is seen using it to become ill and report to Tengen. Further, she also arms herself with a box of kunai laced with Wisteria poison.

With this, we conclude with the Power of Tengen Uzui (Sound Hashira) in Demon Slayer 2021.

Q1. Why does Tengen Uzui have 3 wives?

Ans – This is because Tengen’s shinobi clan practices polygamy.

Q2. How did Tengen Uzui become a Hashira?

Ans – After leaving his clan, Tengen searched for Kagaya Ubuyashiki and joined the Demon Slayer Corps. Thus he worked up the ranks with little help from his wives.

Q3. Why did Tengen Uzui retire?

Ans – Tengen Uzui retired due to injury after the Entertainment District Arc. These injuries include the loss of an arm and an eye.

Ans – Considering that he gained the title of Hashira, Tengen Uzui is definitely strong.

Q5. What is Sound Breathing?

Ans – Sound Breathing is derived from Thunder Breathing and it focuses on the replication of the disorienting loudness of sound through movements.

Ans – Yes, this is because of Tengen were to fight Gyutaro alone, he would win.

As we conclude our article, we would like to encourage fans to read the series while we await the second season’s release. Fans can read the Demon Slayer manga on the Mangaplus Shueisha website.

The Demon Slayer anime series is available on official sites like Crunchyroll, Funimation, and Netflix.

And with this, we conclude with our article on the Power of Tengen Uzui (Sound Hashira) in Demon Slayer 2021. So until we have another article up for you, stay safe, stay tuned, and stay hyped.