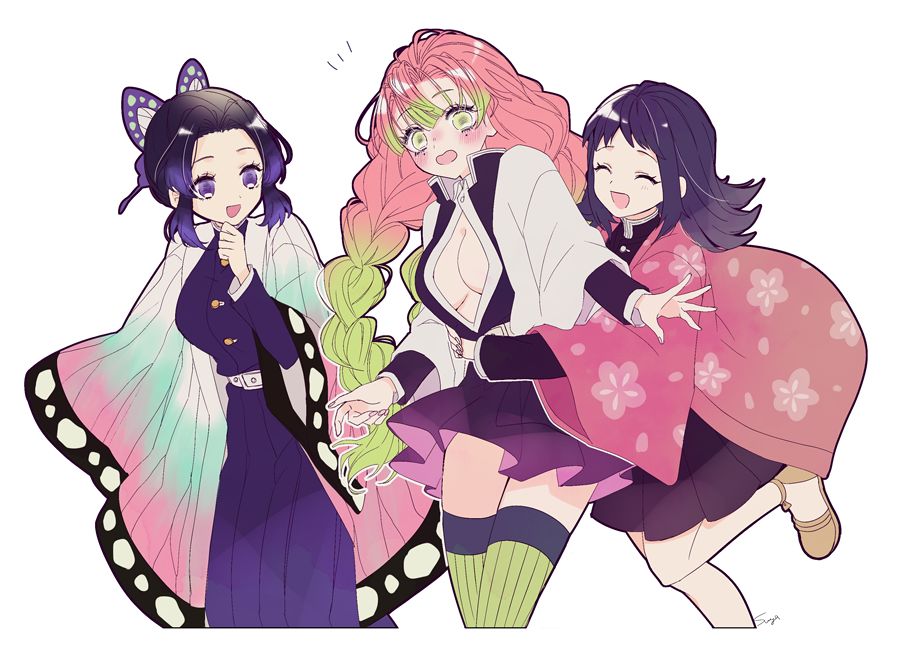 Today we bring to you the Top 10+ Hottest Demon Slayer Female Characters Ranked. This listing will include your favorite Demon Slayer hot characters. Naturally, we have only included age-appropriate characters in this list.

The Demon Slayer series has been gaining popularity since its Season 1 release in 2019. And with a movie already out and a second season in the works, fans have been drawn to its spectacular animation.

However, the beautifully illustrated characters are what make the entire series endearing, fun, and exciting. And, of course, all credits of character design go to Akira Matsushima.

And now, without further ado, let’s get into the Top 10+ Hottest Demon Slayer Female Characters Ranked.

Nakime became the Upper Moon 4 after Hantengu’s death. She was also known as the Biwa Demon.

She was so loyal to Muzan, and her abilities were also very troublesome. She was very calm and straightforward in nature.

We have ranked her at 12th position because, in correlation to the other Demon Slayer female characters, she was less lovable.

Makio is an attractive headstrong kunoichi and one of Tengen Uzui’s wives. Her face is framed with short black hair and yellow bangs that set her apart from the rest.

This petite attractive woman is another wife of Tengen Uzui. Suma has a dramatic personality that is easily influenced by her companions.

However, being a kunoichi, she is surely skilled and gets the work done. Her personality is peppered with a childlike dependence on others which certainly adds to her physical appeal.

Hina is the third wife of the Tengen Uzui and definitely the most level-headed of the three wives. Being a kunoichi, she is incredibly dependable and smart, especially during dangerous situations.

Further, she has an incredibly caring personality only enhances her eye-catching appearance. This makes her one of Demon Slayer’s most attractive characters.

Ruko is the mother of Kyojuro Rengoku. Although she appeared briefly in the Mugen Train Arc, her elegant personality and looks certainly stood out.

She was no doubt one of the most poised and gentle characters with a strong set of values. Her most striking features were her deep red eyes.

Other than this, she was also known for being a constant encouraging force for our favorite Flame Hashira. And her strong sense of morality and kind words definitely made her a fan favorite.

Tamayo was a skilled doctor and also one of the older demons converted by Muzan. Her appearance can be best described as soothing, which certainly reflects her calm and gentle demeanor.

In the series, she dedicated her life to demon research while extending her kindness to humans. Furthermore, she contributed greatly to the fall of Muzan.

And if that automatically doesn’t make her likable, she further dazzled us by always helping our favorites.

Kanae is the late Flower Hashira and the older sister of the Insect Hashira. Before she passed away, she displayed a great amount of kindness and devotion to achieve her goals.

Like most background characters, she too has very little screen time; however, she was surely considered to be an attractive fan favorite.

Her most striking personality trait was her kindness, as she hoped to live in a world of peace between humans and demons.

Daki was the second holder of the Upper Rank 6 title that was shared with her brother Gyutaro.

Her good looks have been carried on from her time as a human when she was considered extremely attractive.

As a demon, her good looks only aged like fine wine. This is supported by the fact that she had held the position of oiran in the Red Light District.

And if her pretty looks don’t it do it for you, she was also known to be including incredibly caring. Thus making her a Demon Slayer beautiful character.

If you have watched the series, you know for sure that you would love to get an Ara Ara from the Insect Hashira.

And honestly, we wouldn’t even mind some attention from the borderline sadistic queen.

Other than her clearly spectacular looks, she was also incredibly skilled in pharmaceuticals and had a great understanding of poisons.

Being a demon, Muzan Kibutsuji had the ability of shapeshifting and biokinesis. Thus he was able to shift his appearance from masculine to feminine.

We witnessed his feminine form appear during the Lower Rank Demon meeting just before the Mugen Train Arc.

Although incredibly attractive, the feminine form of Muzan was still just as deadly when enraged.

This is proved by the Lower Rank Demon slaughter that occurred because Muzan was displeased with them.

Kotoha Hashibira, Inosuke’s Mother, was one of the most beautiful female characters in the Demon Slayer series.

She was so appealing that even the Upper Moon 2, Doma fell in love with her and wanted to marry her. She also possessed a great talent in singing along with her loving nature.

No doubt we have ranked her at second position. Also, subjectively speaking, she had the most beautiful eyes in the Demon Slayer world.

And finally, at number 1, we have Mitsuri Kanroji. Mitsuri is no doubt one of the most attractive and obviously Demon Slayer hot characters.

She was the Love Hashira and had an adorable, friendly demeanor. Her personality attracted anyone with a set of working eyes.

And what’s even better is that she could do so while eliminating a demon.

Further, she was also supportive, protective, and eager to show her love and care to everyone she met.

Q1. Who is the prettiest girl in Demon Slayer?

Q2. Who is the strongest Female Character in Demon Slayer?

Ans – Aoi begins liking Inosuke after the final battle as they eventually get married.

With this, we conclude with our article on the Top 10+ Hottest Demon Slayer Female Characters Ranked. Fans can watch Demon Slayer Season 1 officially on Netflix. So as you await another article that includes your favorites, stay safe, stay tuned, and stay hyped.