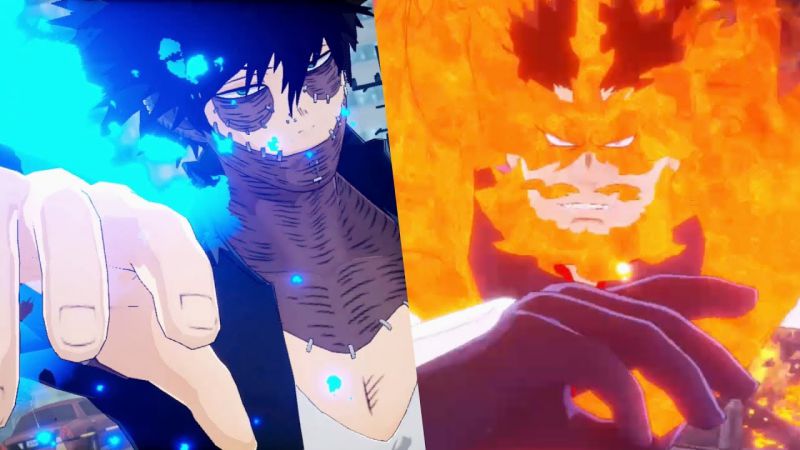 My Hero Academia has gained ubiquitous prominence among all Otakus. Not only its manga series, but its anime adaptation has also secured a great position in the rankings so far. Here in the article, we will discuss the power comparison between Dabi and Endeavor. We have already seen them in the previous season and we know that Dabi’s blue flames are more efficient than Endeavor. But will it be enough to defeat the No. 1 Hero?

Dabi (My Hero Academia): Dabi is one of the major supporting antagonists in My Hero Academia. He is affiliated with the League of Villains and was formerly a member of the organization’s Vanguard Action Squad. He is the son of Enji and the older brother of Shoto Todoroki. His Quirk is Cremation which grants him the power to generate highly destructive blue flames from his body.

Endeavor (My Hero Academia): Endeavor is a Pro Hero who has the highest tally of resolved cases in history. His real name is Enji Todoroki and he is the father of Toya Todoroki and Shoto Todoroki. After the retirement of All Might, Endeavor became the new No. 1 Pro Hero of Japan. His Quirk is Hellflame which allows him to use produce and manipulate large amounts of extremely intense fire at will.

Dabi vs Endeavor (My Hero Academia) –

Dabi is a very powerful villain having been trained by his father at a young age and also due to undergoing self-training later. He relies on the brute force of his Quirk to overwhelm his enemies. He is very effective in enduring battles where heavy injuries are inescapable. Even when his flames begin to eat away at his body due to overuse, he will continue to battle and use his Quirk.

Endeavor obtained immense physical strength after years of physical training. Although he is not at the level of All Might, he got a taste of his strength when he was able to knock Gigantomachia backward with a skull bash. He is also more resistant to pain than the average Pro Hero as we have seen countless times how despite receiving multiple attacks from enemies he can emerge out of them with moderate to no injuries. Thus, Endeavor would be able to dominate Dabi with his brute physical strength.

Dabi has great control over his Quirk Cremation, which allows him to generate highly destructive blue flames. He can project them at a great distance from himself and in large amounts. Thus, his long-range attacks give him an upper hand against his opponents on the battlefield. In addition to this, his flames possess more firepower than that of his father Endeavor’s Hellflame and they also become stronger when Dabi is feeling strong emotions.

Endeavor’s Quirk Hellflame is one of the strongest Quirks in the series which allows him to produce and manipulate large amounts of intense fire at will. He can also control the shape and temperature of the fire he generates. His control over his flames allows him to use them in unorthodox ways such as accumulating them at his feet to achieve limited flight. Thus, we can conclude that based on their Quirks, Dabi will be able to overpower Endeavor.

Dabi mainly relies on his explosive power to make up for his lack of speed. He is not one of the fastest villains on a battlefield which is why he prefers to use long-range attacks. According to the Ultra Analysis Book, Dabi had a speed of 3 out of a total score of 6. Although his lack of speed doesn’t seem to have any effect on his overall power level. He can increase his speed dramatically with Flashfire Fist but it can’t be sustained for long.

Endeavor is one of the fastest Pro Heroes in the series. According to the Ultra Analysis Book, he had a speed of 5 out of 6 which speaks volumes. He can use his Quirk in an unorthodox way to give him sudden bursts of speed and limited flight. His mobility is one of his major assets on a battlefield. He can also react exceedingly fast to dangerous situations and people in need. Thus, in terms of speed Endeavor is far ahead compared to Dabi.

Dabi has a variety of techniques at his disposal which he can use with the help of his Quirk. These are Flashfire Fist, Flashfire Fist – Jet Burn, and Prominence Burn. Flashfire Fist was Endeavor’s signature technique that was passed down to Dabi. With this Dabi raises his fire’s temperature to its highest level and maximizes his power while unleashing devastating flame attacks. On the other hand, Prominence Burn allows Dabi to launch a massive, concentrated beam of fire from his entire body that can vaporize his target.

Meanwhile, Endeavor has some flashy techniques in his artillery as well. Some of these are Flashfire Fist – Hell Spider, Flashfire Fist – Hell’s Curtain, Karmic Raze – Hellfire Storm, Raging Assault – Hell Minefield, and Vanishing Fist. His variety of techniques gives him an upper hand against his opponents as they have no way to predict which technique he is going to pull out from the bag. Thus, based on techniques Endeavor holds a slight advantage over Dabi.

Dabi has shown his expertise in many previous battles. During the Vanguard Action Squad Invasion, he was easily able to repel the Bakugo Escort Squad and restrain Bakugo with one hand. With the help of Mr. Compress, he was also able to kill the Sand Hero: Snatch. He also had a battle with his brother in which he was almost able to burn Shoto alive with his flames but Midoriya intervened in between.

Being the No. 2 Pro Hero of Japan, Endeavor has defeated many powerful villains. He has proved his strength numerous times against the League of Villains. He has repeatedly faced and defeated multiple grades of Nomu without taking much damage himself. During the Kamino incident, he was able to leave unscathed after a temporary battle with All For One with the help of Edgeshot. He also dealt massive damage to Tomura Shigaraki which caused his body to break down during the Paranormal Liberation War. In the current story, we have seen how Endeavor teamed up with Hawks and Jeanist against Dabi and other villains. Thus, in terms of previous battles both of them are quite even.

Dabi vs. Endeavor: Who will win?

A clash between this pair of father and son would make up for an epic watch. However, the scales would slightly tip in favor of Endeavor. The major upper hand that Endeavor has on Dabi is his heat resistance. Dabi got the freeze resistance from his mother which is why he is susceptible to long heat exposure.

Endeavor has more techniques in his arsenal with which he can overpower Dabi. However, Endeavor may hesitate to fight in a one-on-one against his son due to his past mistakes which may give Dabi an opening to defeat his father. Although the tips are slightly in favor of Endeavor Dabi has gotten more control over his Quirk as the series progressed and in no way he can be completely written off.

Whatever may be the outcome, one thing is for certain that this battle is going to be full of emotions, flames, and firepower. Dabi with his powerful blue flames and Endeavor with his years of experience are going to make an exciting watch. The latest chapters of My Hero Academia can be read in Mangaplus Shueisha or Viz Media.